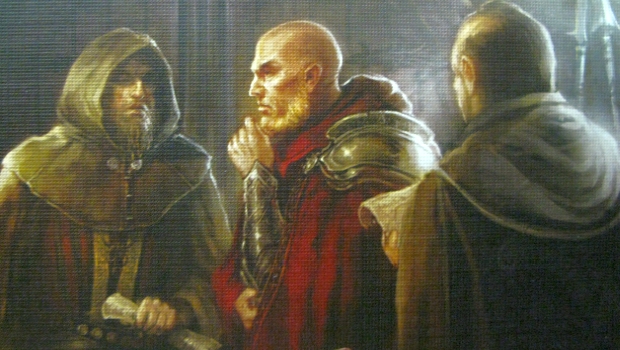 As a late-thirty something, I grew up when strategy board gaming reached its zenith of popularity and execution. Diplomacy remains the gold standard for hardcore paranoia for serious hobbyists with an axe to grind and a weekend to burn. Risk and its more complicated younger brother Axis & Allies still resonate in blustery convention halls and dark basements around the western world, and Chess remains the most popular test of intellect and cunning ever deployed. With no small measure of enthusiasm I present this review of A Game of Thrones, a remarkably successful submission into this elite pantheon of board games.

The setting is George R. R. Martin’s fictional Westeros, and elements of the author’s epic fantasy universe are deftly woven into the fabric of play. The second edition of this game invokes forty-two major characters across six Houses: Baratheon, Lannister, Stark, Martell, Greyjoy, and Tyrell. I recommend playing this with good friends who are also fans of the books or the HBO series; a working knowledge of A Song of Ice and Fire can influence player interaction and add a role playing dimension to the experience, but it is not required to play. Indeed, when I first sat down to play AGoT I had almost no exposure to the franchise, and was surrounded by four strangers and one old friend, all of whom knew the stories so well I felt as if they spoke in a different language. What followed was the single most exhilarating gaming experience of my life.

A Game of Thrones is a strategy war game; players must expand territory by military conquest. The first player to control seven strongholds or the player who controls the most strongholds at the end of ten turns wins. Most likely, the winning player will have succeeded using a combination of aggressive but prudent combat, tactful manipulation, and some luck with the cards.

Gameplay consists of three primary elements: Westeros cards, March Orders/Combat, and player interaction. After the first, every turn begins with a Westeros phase. Westeros cards are revealed from three decks and prosecuted in order. AGoT strikes a near perfect balance of elements players can and cannot control, and the Westeros phase creates a great amount of uncertainty through various card effects. Players expand armies via the Mustering card, organize troop deployments during Supply, and vie for influence, including turn order – a critical driver in this game – whenever A Clash of Kings is drawn.

AGoT cleverly uses a silent auction mechanic during A Clash of Kings, whereby players secretly bid for position on the three influence tracks using power tokens. Power tokens are acquired using order markers, which are also used to move armies, support action in adjacent territories, or defend territories a player controls. Basically, order markers are issued wherever players have at least one army unit. Adding another layer of complexity, the territories themselves have various traits. All land territories add supply tokens, power tokens, strongholds, or a combination of the three to players’ inventory. Power tokens are also used during the Westeros phase when Wildings attack. Wildings can be defeated when the total number of power tokens bid by all players exceeds the current value of the Wildings track. Winning gives the highest bidder an advantage over the other players. Losing to the Wildings afflicts the lowest bidders with a serious hit on the supply track or influence tracks.

Once all Westeros card effects are resolved, the turn advances to the Planning phase, where players issue order markers, face down, to all territories with units. Alliances are put to the test and tension reaches the apex during this phase. Planning is also the longest phase, taking the bulk of every turn. It feels remarkably similar to the intense time analyzing moves and countermoves on a chessboard. To a great extent A Game of Thrones rewards analytical play by presenting all the information needed to determine the most probable results of combat before it occurs. Breathing new life into the mechanics of Diplomacy, there are no dice used to resolve combat. When a march order marker is revealed, the attacking player chooses which units to move into the opponent’s territory and the initial combat value for each side is set. There are three additional factors: Support orders, House card effects, and the Valyrian Steel Blade, all of which contribute to a final combat value. None of these factors is unknown for the purpose of calculating the maximum combat or defense value for any territory, but that’s why order markers are issued face down. Trying to figure out what every other player is doing is an art form.

Player interaction is the heart of this game. The strength and longevity of alliances forged and broken fuel the tension overlaying the planning phase. This aspect may turn some people off, and it’s why I suggest playing A Game of Thrones with a group of friends who won’t take in-game deceit personally. Winning this game cannot occur in a vacuum, except maybe by Stark, but that is incredibly unlikely. Players need each other to help with artificial borders along the way. Whether their dialog pertains to a specific disputed territory or a lasting non-aggression or support alliance against other Houses, deals must be struck. But giving one’s word is not the same as keeping it, and therein lay the agony and the ecstasy.

Like all of Fantasy Flight’s offerings, A Game of Thrones is well-made and visually stunning. The Westeros map board includes the game status tracks for influence, supply, turn number and victory, and gives enough room to manage all the necessary counters without feeling cluttered or cramped. The same is true of the territories on the map for managing units. Military units come in four types: Footmen, Knights, Siege, and Ships, and all are cast in polished marbled plastic matching the six House color schemes. The forty-two House cards used during combat are beautifully illustrated, evoking the storylines and characteristics of George R. R. Martin’s many central figures.

In preparation for this review I played A Game of Thrones again with my regular group. Turn one passed without much fanfare. Stark and Baratheon opened conservatively, while the other houses made the obvious first turn land grabs. Lannister made non-aggression pacts with both Tyrell to the south and Greyjoy to the north. Something had to give.

Turn two kicked off with a Mustering Westeros card, filling each player’s ranks with fresh troops. Following the Planning phase, Lannister revealed a march order on Riverrun, which he had taken the prior turn. Greyjoy revealed a march order on Seagard, the neighboring territory. Lannister was first to take his actions, and received assurances that his forces were under no imminent threat. Lannister took his ally at his word but showed too much deference. What happened next changed the complexion of the entire game.

The math on the board was obvious to everyone. Greyjoy was presented with an opportunity too good to pass up. Were he to sneak attack Lannister at Riverrun, the initial combat values would be even at 6. Players could employ their greatest House warrior to keep the contest even, but because Greyjoy occupied the first position on The Fiefdoms influence track, he controlled the Valyrian Steel blade, giving him +1 to final combat value and the victory. The outcome would have favored Lannister if he had used his lead position on The King’s Court influence track to change his march order on Riverrun to a +1 defense. The ultimate tie would be decided along The Iron Throne influence track, where Lannister would have prevailed by virtue of his higher position.

Breaking his word, Greyjoy invaded Riverrun from Seagard and Pyke, supporting from Ironman’s Bay. Lannister counterattacked with an ineffectual verbal dressing-down of his fleeting ally, and when the dust settled, Greyjoy occupied another stronghold and established a near impregnable position on the board.

By the end of turn three, Greyjoy established himself as the dominant force on the board, with as many as six strongholds within reach in the following three turns. Lannister was marginalized and may be eliminated as early as turn five. Martell, despite aggressive play, was poorly positioned to resupply or take advantage of another Mustering event. He was overextended and being at war with both Tyrell and Baratheon is a very steep hill to climb. Nevertheless, his tactics limited Baratheon’s options. At that point, only a dramatic change in strategy by Stark and Baratheon could slow Greyjoy’s aggressive expansion.

Final Thoughts: A Game of Thrones rewards intelligent, aggressive play, as any great strategy game should. More experienced players in a mixed group will be challenged playing as Martell or Lannister, and players with lower risk-tolerance should take Stark or Baratheon. Yes, there are balance issues, but the influence tracks offer opportunities for savvy players to improve their circumstances. Foremost, building alliances can affect the tide and enable any House to claim the Throne.

A Game Of Thrones: The Board Game, 2nd Edition by Christian T. Peterson and Fantasy Flight Games

A Game of Thrones rewards intelligent, aggressive play, as any great strategy game should. There are minor balance issues, but the influence tracks offer opportunities for savvy players to improve their circumstances. Foremost, building alliances can affect the tide and enable any House to claim the Throne.