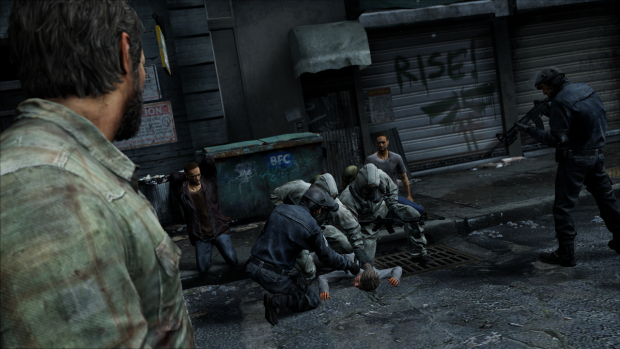 It’s hard to write about The Last of Us without sounding a bit like a crazy person.

On its surface, it seems like just another apocalyptic zombie tale mixed with some over-the-shoulder shooting action. And in many ways, it is exactly that. But there’s a reason why The Last of Us won countless Game of the Year awards (including our own)–it takes those well-worn end-of-the-world tropes and crafts a story as much about humanity’s ability to find happiness and hope in even our darkest moments as it is about the power of our very will to survive. It is a compelling story wrapped in a highly satisfying action game–and with The Last of Us: Remastered on PS4, it’s even better.

The Last of Us takes place 20 years after fungal spores have covered the planet, infecting everyone who comes in contact with it, turning them into mindless zombies. We follow the story of Joel, a grieving father who finds a surrogate daughter in Ellie, a 14-year-old girl who may hold humanity’s last hope. It’s a narrative that is filled with apocalyptic clichés, but it’s understated in a way that most games just aren’t, and the interaction between our two heroes lends this zombie tale a human element that elevates it into the pantheon of great horror fiction. Combined with the harrowing action gameplay that forces you to scrounge for supplies and make every single shot count, The Last of Us is one of the greatest survival horror games to come out since Resident Evil 4. (If you’d like more specific information on the story, gameplay, and multiplayer of The Last of Us, check out our full review.)

Now, the big question here is whether or not The Last of Us made the transfer over to next-gen intact–and the answer is a resounding yes. It includes the astounding main campaign, the almost-better-than-the-main-campaign DLC expansion Left Behind (read the full review here), as well as all of the multiplayer maps and additional difficulty levels released to date. Also included is a feature-length documentary on the making of The Last of Us, as well as commentary tracks for the game’s cinematics featuring creative director Neil Druckmann and a photo mode that lets you pause the action and take stunning photographs to share with friends.

Perhaps the most obvious addition to the game is the enhancement in the visual department–and The Last of Us absolutely sings on the PS4. Resolution has been bumped up to a full 1080p, and textures, environments, and shadows have been greatly enhanced. But most importantly, The Last of Us is rendered at a nearly rock-solid 60 frames per second, bringing an untold fluidity to not only the game’s animations, but its controls as well. And the difference is notable–the developers at Naughty Dog were kind enough to give players the option to lock the frame rate at 30 frames per second, allowing for more stability and higher shadow quality. But the difference between the two is night and day, and once you see how much better 60 frames per second looks, you’ll never, ever want to go back.

But with the port to a new console comes a new set of quirks, and some weird graphical bugs and technical issues still rear their head every now and then. I’m not sure if many of these are new glitches or if they’re holdovers from the PS3 version and are simply more noticeable now because of the increase in fidelity, but they are definitely there. These issues are minor, though, and the upgrade to PS4 is still a technical and artistic marvel.

For better or worse, The Last of Us: Remastered is still the same game as before. The AI can still be a bit wonky, and the combat and narrative are still bleak as hell. If it didn’t win you over before, the Remastered version won’t do you any favors. But if you’ve never had a chance to experience it and want to see what all the fuss is about (or you’re already a fan), the Remastered edition is the place to do it.

The Last of Us is truly the game of a generation, and the Remastered edition brings the harrowing adventure to a whole new generation with expert style.