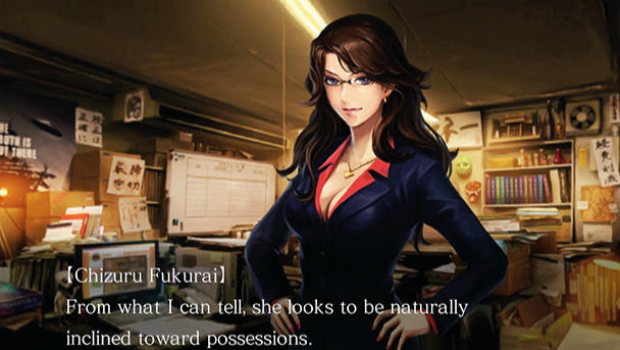 I think it is fairly common for young teens to get interested in ghosts and the occult. Be it a surface level interest or a lifestyle driving obsession, at some point the urge to go into an abandoned graveyard, long decrepit hospital, or burned out schoolhouse with a tape recorder and some salt and see if a ghost can’t be conjured up from the ethos possesses most of us. As fun as it is, the experience usually leads nowhere.

If it did, however, lead to a ghost and a fight, then the world of Tokyo Twilight Ghost Hunters Daybreak is the only logical outcome. A mix of high schoolers and science weirdos, led by a seductress with ulterior motives, the team feels like a familiar group. Even with the absurdity it recaptures for me a snapshot feeling of high school.

The majority of the game is played out in graphic novel style. This latest re-release of the game, dubbed Tokyo Twilight Ghost Hunters Daybreak: Special Gigs, is a largely unchanged release with the exception of an extended story. In this mode of the game, you interact with your classmates, team members, and other people, using a sort of reaction system. This reaction system is, in a word, terrible.

You are given five choices that are basically your tone. This is “Love”, “Angry”, “Sad”, “Questioning”, and I suppose “Amicable.” Then you are given five more choices, choosing which body part you use. The system is unexplained, to the extent that I’m just guessing at what these choices mean. I could look it up, sure, but I should not have to do so. Though, it is not just that confusion that is a problem.  The system simply doesn’t work.

So, basically what will occur is a character will make a statement or action towards you.  You use this system to react, and end up doing something like licking their knee or smelling their hair or some other anachronism in this bag of inappropriate responses. The game is trying to give me freedom of reaction, and really it just makes me look like some sort of shy Donald Trump. Whereas this game is so focused on telling a story and having you be a part of the action, this is a big and constant problem.

The game doesn’t stop at graphic novel and turns the tables with the ghost hunting missions. A tactical RPG style of battles matched up with a very deep pre-planning system provides a large amount of fun, and something fairly unique. The system is very simple, with all of the action taking place on a blueprint-esque top-down view of the space you are in via an in-game ghost hunting tablet computer.

You get the plans for the area where you will be hunting ghosts, and you are able to pre-plan where you will place traps, items, and other needed tools. You spend a certain amount of money for this setup which comes out of the post-fight profits. Once you’ve planned the battle, you go into the fight itself and attempt to eradicate ghosts.

The battles themselves are pretty tough. The ghosts have to be detected either with character sight, or via traps. If they spot you, they will draw towards you to attack. Each character and enemy has a turn with a certain number of action points for attacking and moving. It is on you to not only attack, but guess where the ghost will be at the end of the turn as well.

All in all, you’ve got a graphic novel style of game for one half, and a tactical RPG for the other.  The graphic novel half of the game is gorgeous, the animations and hand-drawn style is just wonderful. The game uses photographs as backgrounds, and I came to like this as well, even though it first it was a bit Sega CDish. Though it looks great, the reactions system provided is wonky, broken, and hard to understand.

On the other half you have a tactical RPG that works perfectly, is tons of fun and very easy to learn, but is really bland looking and consists of teardrop-shaped characters avoiding squares to attack other teardrop shaped enemies on the map.

I’m not a big fan of the music, it’s just sort of  there, and really sounds more like it was tossed in rather than made for the game.  However, Japanese Hard Rock sounds very, very generic to me (i.e. every single hard rock anime lead-in ever made) so I could be wrong.  This is a bit strange as the game has a sort of music underground aesthetic to it, in particular with the save “image” for each chapter being a new band poster-style picture, each cooler than the last.

The art does stand out in the end with Tokyo Twilight Ghost Hunters Daybreak: Special Gigs as the most endearing feature of the game, and with plenty of ghosts, backgrounds, characters, and cutscenes to enjoy, the wealth is there.

Tokyo Twilight Ghost Hunters Daybreak: Special Gigs is a highly strange game, mixing graphic novel gameplay with a tactical RPG. The game is very fun, but not everything works as well as it should. The art style is wonderfully detailed and there are lots of quirky art details that add to the experience, but overall the game fails to really shine in either of its styles, and leaves much to be desired.

Patrick Rost has been with Gaming Trend since 2013. At first focused on sports coverage, Patrick has gone on to cover a wide range of games and other products for the website. Outside of Gaming Trend, Patrick writes and records music, grinds perpetually in Elder Scrolls Online (PS4), and lives day to day with his two dogs, Bob and Stella.
Related Articles: Tokyo Twilight Ghost Hunters Daybreak: Special Gigs
Share
Tweet
Share
Submit