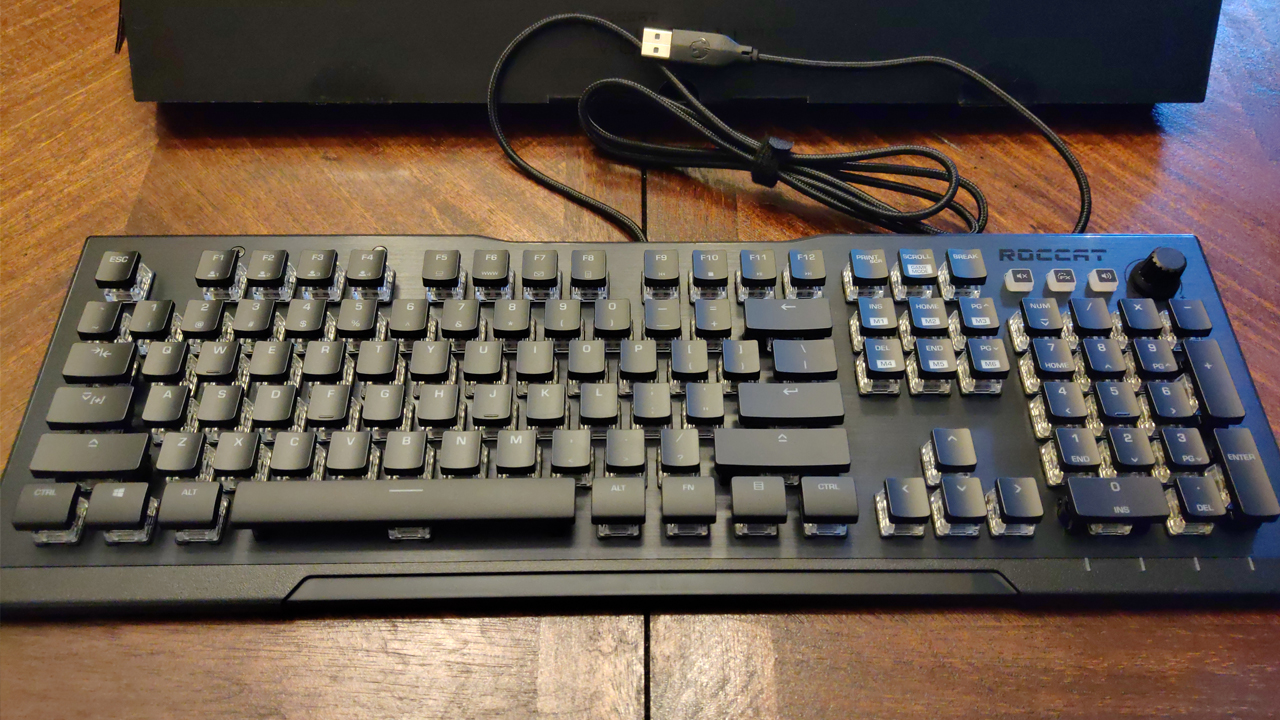 Undoubtedly you’ve heard of Turtle Beach as we routinely check out their high-quality gear here, but you might not have heard of ROCCAT. A German peripheral company, ROCCAT has been making accessories for Europe and Asia since 2006. Recently, we’ve seen these two peripheral titans merge as Turtle Beach acquired them in March of 2019. Now, we see some of the first fruits of that combined company — the ROCCAT Vulcan 120 AIMO keyboard (see below), Kain 120 AIMO, Sense AIMO mousepad, and the Apuri Raw mouse bungee (our review for the mouse, mouse pad, and bungee here) thrown in for good measure. Let’s dive in and see what years of German engineering brings to this keyboard.

The ROCCAT Vulcan 120 AIMO (let’s just call it the Vulcan from now on, shall we?) is built on an anodized aluminum chassis, which seems to be the trend nowadays. Attaching to this frame with strong magnets is a stylish hardened plastic wrist rest that seamlessly blends with the rest of the board’s aesthetics. This particular board is using ROCCAT’s proprietary blue “Titan” switch (more on that in a moment) with a sleek keycap to maximize light output. The aluminum frame does that nicely, scattering the light from the extraordinarily small keys more effectively than any keycap I might otherwise use. 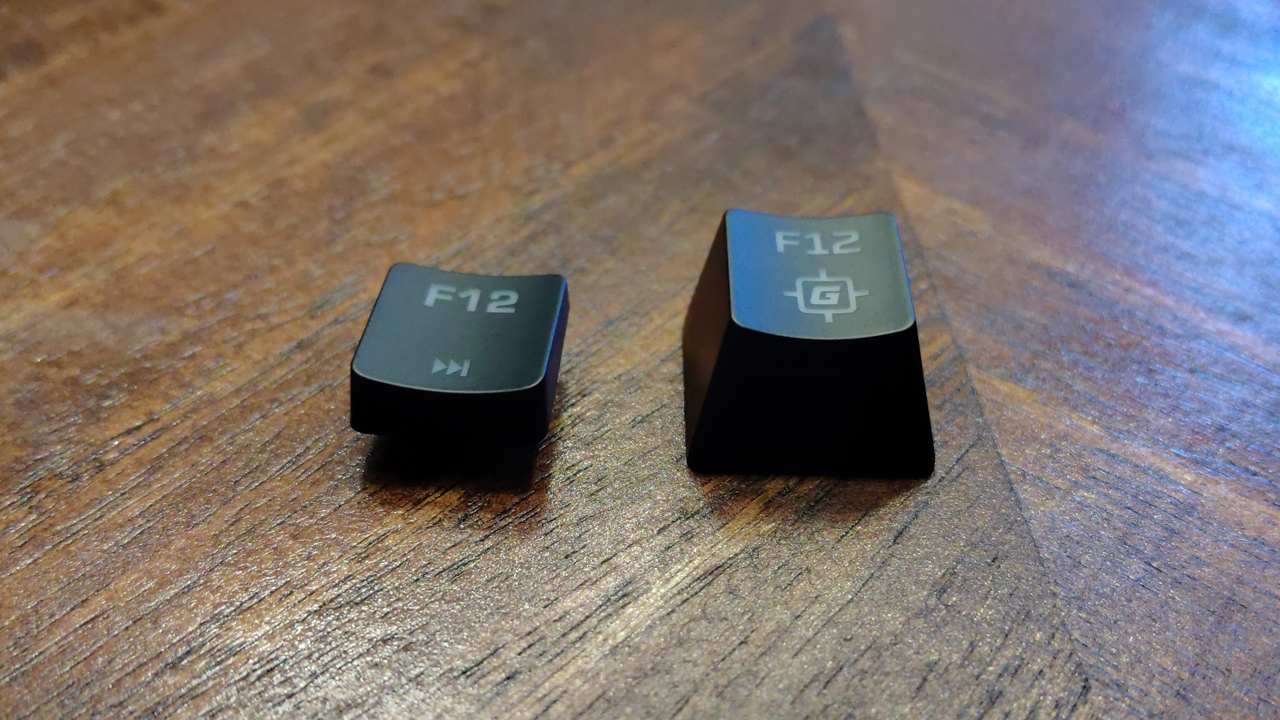 It took two days of solid use to acclimate myself to the slight angle change of these smaller laptop-esque “chiclet-style” keys. At first I found myself double-tapping keys, or picking up an additional error or two in my typing when using it for productivity. The change also means that you won’t be able to use the generic keycaps that other boards have, so I felt myself missing the traction keys I had installed in my other board. They feel like a combination of a desktop and a laptop keyboard, with a small amount of space in between keys, and just enough of a slant to the face of the keyboard as to make this hybrid work. All of that said, none of these changes affected my gaming, as you can see below:

Cherry MX switches have been the gold standard for a while now, but recently more companies are looking to break the 35 year hegemony. ROCCAT worked with switch manufacturer TTC (short for Trantek Co. out of Huizhou City China) to design a new switch, dubbed the Titan, to do more than just create another Cherry-like device. Looking at the switch itself, TTC has reinforced the port on the sides with two leaves to reduce key wobble on a full press. Similarly, they’ve shortened the throw on the key, pulling the travel distance down from 4mm to 3.6mm, with an actuation point of 1.8mm instead of 2mm. Additionally, the TTC team has reduced debounce — the rebounding effect that can cause a key to register a second keypress after having only been pressed once. Using this reduced bounce, the ROCCAT team further reduced the detection by a blistering 30%. This means that your key presses are nearly a third faster than any other keyboard. If you want the math behind it, well, you are in luck: 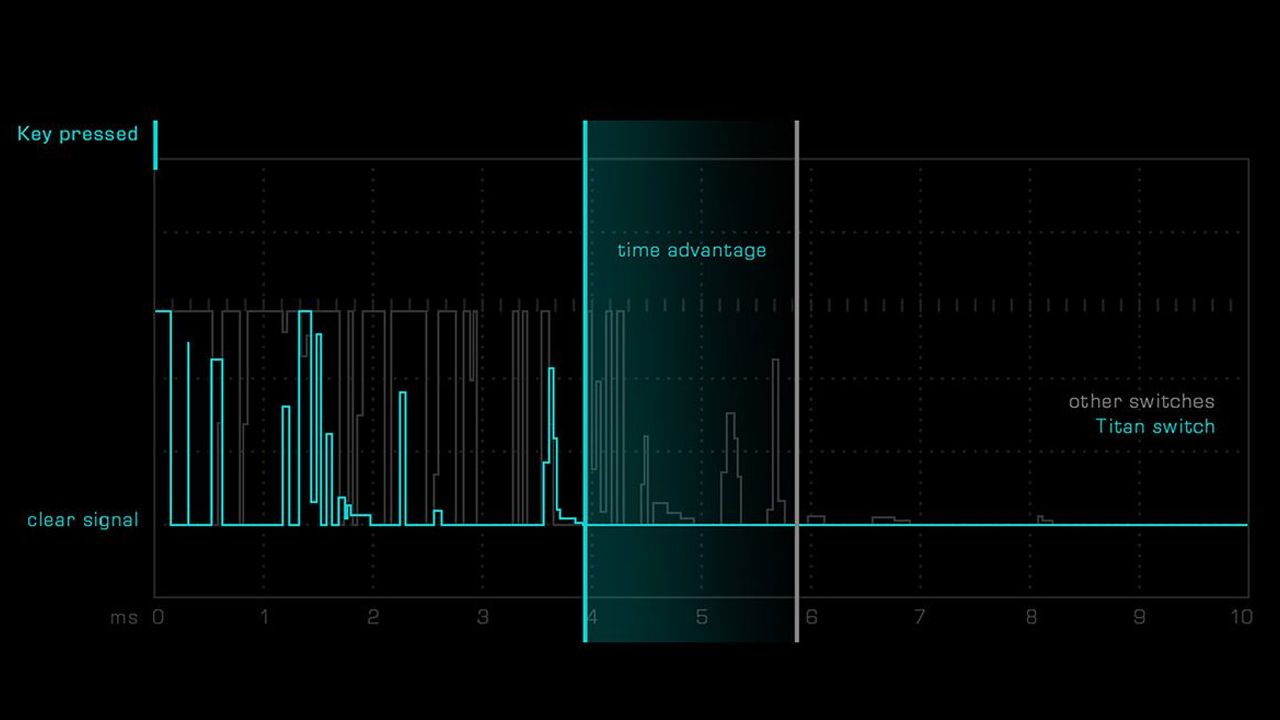 Math to the rescue

This particular board is using a tactile switch, meaning the board has a “bump” mid-actuation. It’s entirely personal preference on whether you like this sort of tactile feedback, or if you prefer linear keys which are a smooth action all the way to the bottom. I find that my personal preferences run towards linear for gaming and tactile for typing, but that may just be the hardware snob in me. Either way, the reaction time improvement is significant, so I can’t count that small detent as a negative in this case. 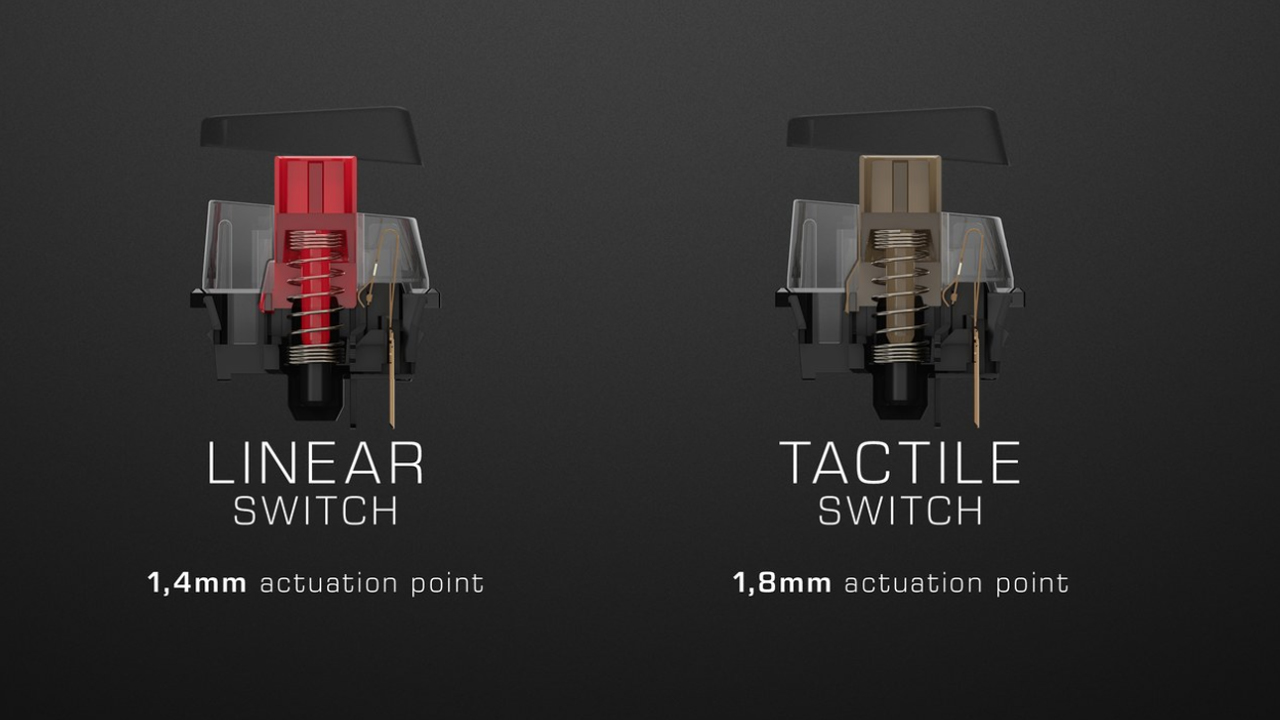 In terms of special keys, ROCCAT went a bit of a different direction than most premium keyboards. Rather than devoting dedicated keys to things like video controls, they’ve used a function key for alternate modes. By way of example, the normal Insert, Delete, Home, End, and Page up/down keys grant six macros by pressing Fn and the corresponding key. Similarly, F9 through F12 handle play, pause, stop, fast forward, and rewind respectively. F5 through F8’s alternate modes open My Computer, a tab in your browser, email, and the Windows Calculator program. It’s all remappable in software, but since the keys are labeled, you’ll have to keep them straight in your head. There are three dedicated keys for mute, turning on effects (more on that in a sec), and a big oversized knob for adjusting volume. There are four lights at the bottom right of the board to see whether caps lock, numlock, and scroll lock are on, which isn’t abnormal, but there is also a game mode on this keyboard which allows you to lock out the Windows key entirely, also changing those function keys to be only macro keys. No more accidental tabbing out of your favorite game. Admittedly, I can’t say that I used many of the function keys frequently, but the functionality is all there, as is the software to make it your own.

ROCCAT uses a software called Swarm to keep their devices up to date. The moment I fired up the app with the devices connected to my PC, the Swarm app recognized that I had the keyboard, mouse, and mouse pad all connected. It immediately grabbed the latest firmware and updated all of them. After a quick device reboot, Swarm kept my devices under a watchful eye. Beyond keeping the devices up to date, Swarm houses a massive host of customization options for all ROCCAT devices. Let’s take a look under the hood.

The keyboard tab in Swarm lets you load macros, adjust key functions, repeat delay and blink rate for your cursor, and your illumination levels and RGB zones. Additionally, you can quickly launch four profiles with the click of a button at the bottom of the app. In this section is also a “sound feedback” setting, allowing you to select a sound for keyboard use. Namely a click, typewriter, beam, and “sci-fi” sound that’ll come through your speakers every time you press a key. I have absolutely no idea why you would use this other than “the lolz”, but it’s a thing that exists. 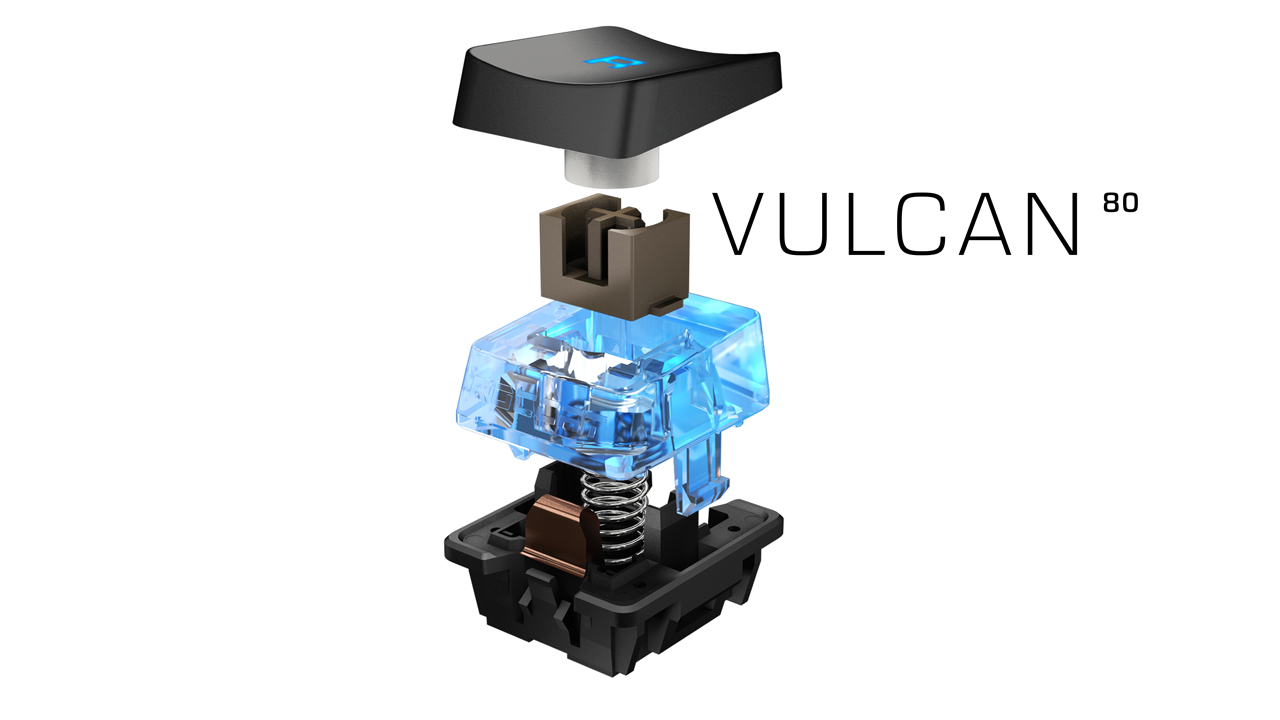 Importing macros and remapping key functions is a breeze. You can also initiate automatic profile functions when the Swarm detects that you’ve launched a specific application. There are 40+ game profiles pre-built, though it’s clear that this list is in dire need of a refresh. By way of example, The Division is in the list, but The Division 2 is not. Similarly, Battlefield 4, but not 5, Borderlands 2 but not 3, and Civilization 5 but not 6. I didn’t have a lot of luck locating new profiles and macros on the Internet, so I was at least happy with how easy it is to build them from scratch. This is an area where Turtle Beach can help ROCCAT, and I hope they do as we all win in that scenario.

I will freely admit that I am not an RGB devotee — there is no light switch rave going on inside my computer case. That said, with the ROCCAT Vulcan 120 AIMO keyboard, the Kain 120 AIMO mouse, and the Sense AIMO, my desk looks like a dance club. Within the Swarm software lies a plethora of RGB adjustment options, most notably the AIMO settings. AIMO stands for…well, I don’t actually know, but it’s the centralized ecosystem for the lighting engine that all of ROCCAT’s high-end gear uses to synchronize and customize their RGB lights. We are a long way from membrane keys or lighting — each of the individual keys in the Vulcan 120 is capable of being individually mapped to any of the 16.8 million possible colors. The concept of AIMO is that it “learns” from your usage, altering the lighting based on common keypresses and usage automatically. With AIMO enabled, that information is shared between the keyboard, mouse, mouse pad, and headset, provided they are all ROCCAT devices. In practice, over the course of a week, the keyboard learned that I like my first person shooters, seemingly emphasizing “aggressive” colors and pushing my lights closer to the WASD navigation keys. Better still, it kept the lighting the same for my mouse. Unfortunately, the Sense AIMO mouse pad’s outer ring is supposed to integrate, but it seemed to come out of sync with the other two devices fairly frequently. If you want tighter control over your lighting, you can select from several profiles or turn it all off, if you hate fun. 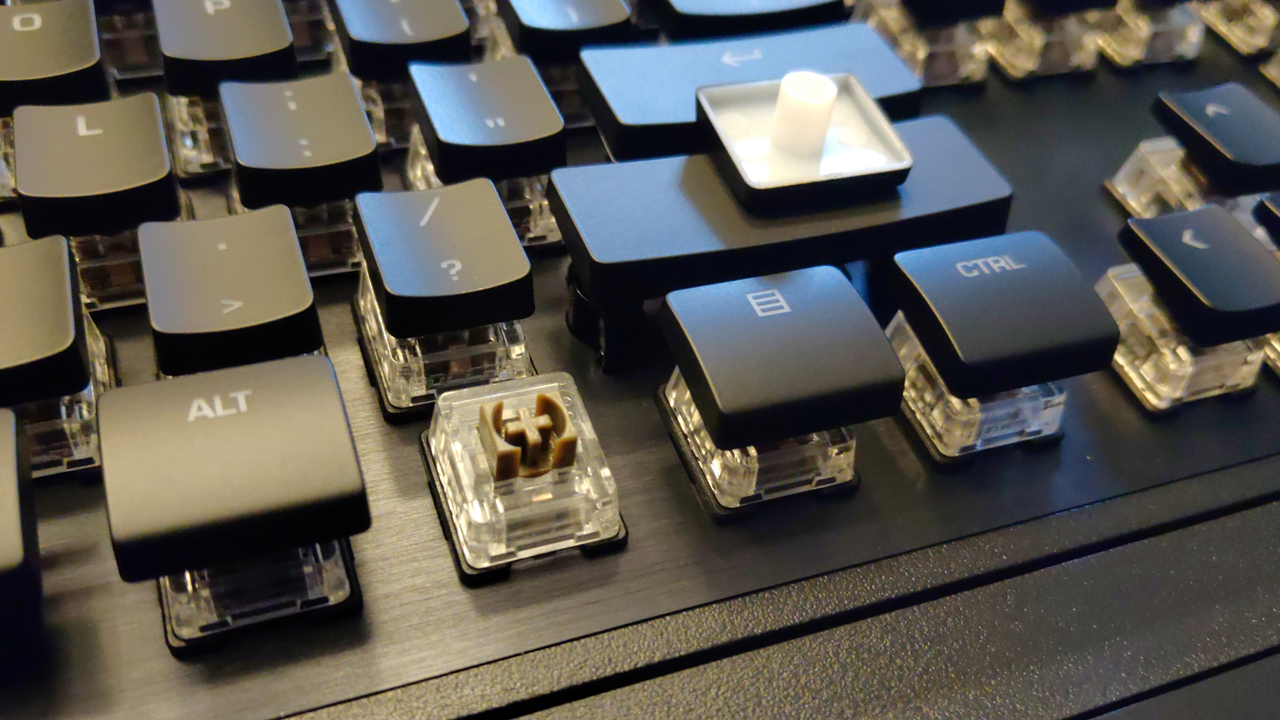 The switch in production.

One of the best things about this board that I never expected to like is the small amount of space in between each key. With each key unobstructed by the shroud of a large keycap, you can see all the way to the steel frame. This makes it remarkably easy to clean. Dog hair, stray bits of fuzz, dust — whatever may be floating around your desk can be removed from the Vulcan with a quick blast from an air can without the need to remove the keys. It’s an unexpected boon.

There are a few things that, after extended use, I didn’t like about the Vulcan 120. While I love the concept of the magnetic wrist rest, I have to admit that after a few days I was wishing for something padded. The hard surface offers a place for your wrists to sit, but the comfort level doesn’t rise to the level of calling it a “rest”. ROCCAT does sell a wrist rest, so perhaps the next iteration of this board will have a comfy option. Additionally, the device is hard wired and has no USB pass-through port, whereas most premium boards feature a removable cable (preferably USB-C and braided, thank you) and allow you to plug in your mouse in the rear of the frame. The board is priced at $119.99 at the time of writing, on sale from the normal price of $159.99, which makes it highly competitive in the premium keyboard space.

With a robust new switch type and a unique keycap design, the ROCCAT Vulcan 120 keyboard delivers on much of its potential. While some bells and whistles could be improved, this first post-merger effort from ROCCAT spells a bright RGB-colored future for the company.

Ron Burke is the Editor in Chief for Gaming Trend. Currently living in Fort Worth, Texas, Ron is an old-school gamer who enjoys CRPGs, action/adventure, platformers, music games, and has recently gotten into tabletop gaming. Ron is also a fourth degree black belt, with a Master's rank in Matsumura Seito Shōrin-ryū, Moo Duk Kwan Tang Soo Do, Universal Tang Soo Do Alliance, and International Tang Soo Do Federation. He also holds ranks in several other styles in his search to be a well-rounded fighter. Ron has been married to Gaming Trend Editor, Laura Burke, for 21 years. They have three dogs - Pazuzu (Irish Terrier), Atë, and Calliope (both Australian Kelpie/Pit Bull mixes).
Related Articles: Hardware, ROCCAT Vulcan 120 AIMO keyboard
Share
Tweet
Share
Submit