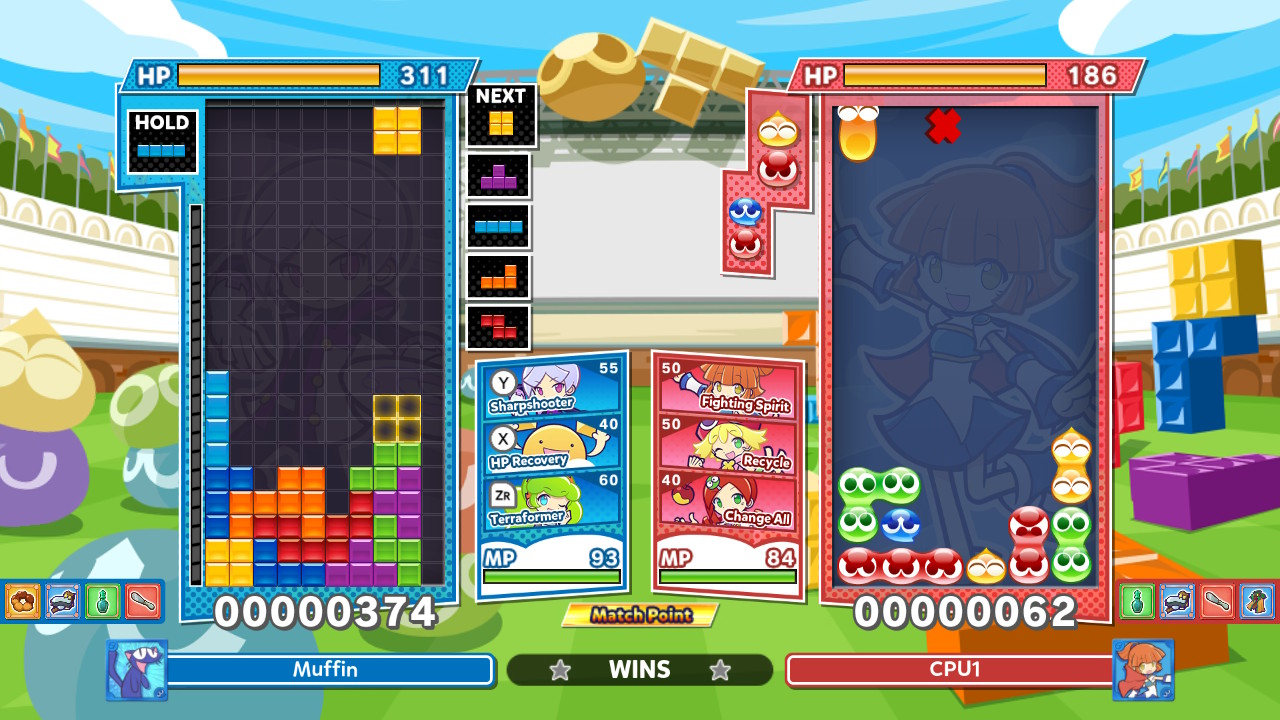 Several years ago, the competitive puzzle game community was given a unique mash-up of two unlikely allies: Puyo Puyo and Tetris. While the concept in theory sounded strange, in execution and through a wide variety of modes, it was a hit and even had tournaments at AnimEVO, the anime fighting game focused counterpart of EVO. After several years, SEGA decided to go ahead with Puyo Puyo Tetris 2, but does it provide enough changes to warrant a sequel? In our preview, we outlined the new additions to Puyo Puyo Tetris 2 including the new story mode, skill battles, and problems for lesson mode. 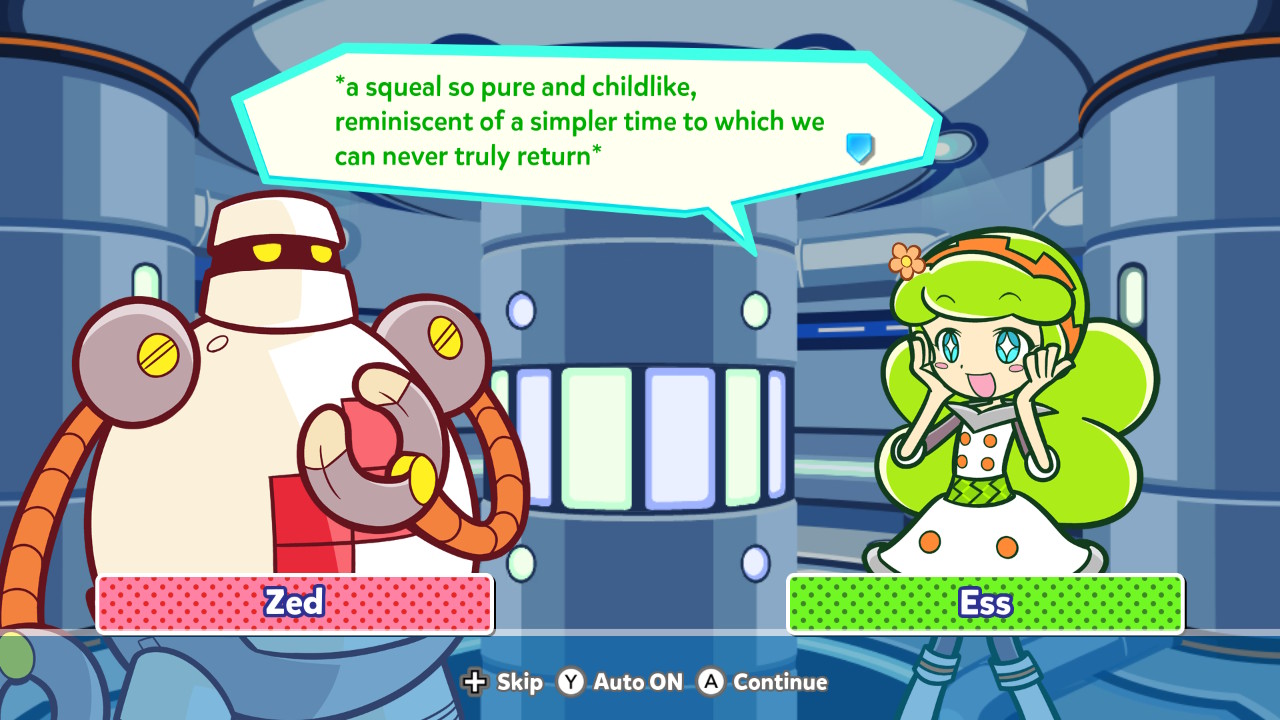 First, we should discuss everything that’s here from Puyo Puyo Tetris 2. Each mode returns, without anything being changed significantly. Of course, there are new characters and options to choose from to suit the individual aesthetic needs of each player, but everything that was good about Puyo Puyo Tetris is still here. You are still able to choose between either Puyo Puyo or Tetris in normal battles, and swap mode remains as hectic and disorienting as before. And for what it’s worth, these modes are just as fun as they were when Puyo Puyo Tetris was first released.

The two main selling points of Puyo Puyo Tetris 2 are the new story and the skill battles, and unfortunately, this is where the sequel’s additions squeal to a stop. First is the problem with the story mode. The story itself feels like it wants to be a crossover, but the Tetris characters aren’t any more recognizable than the Puyo Puyo characters. If you’re a fan of the Puyo Puyo characters, you may find charm in the cast, but they feel like more of the same even down to the mascot. 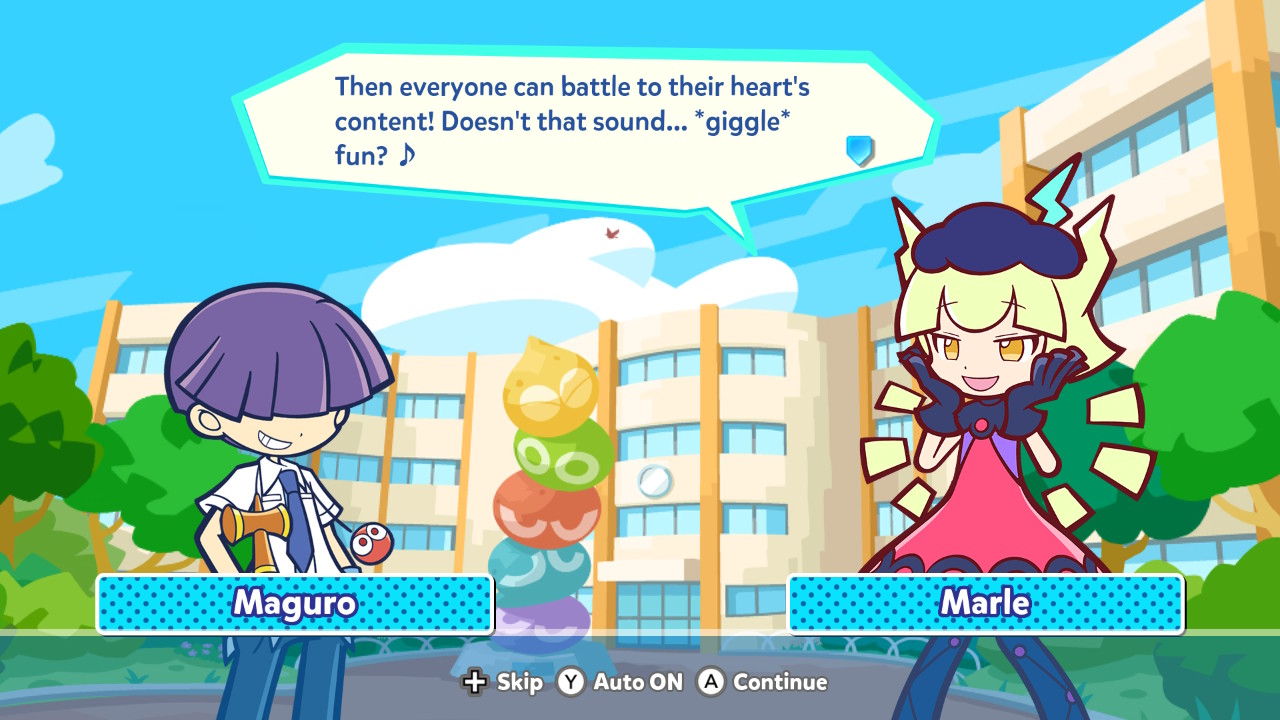 As you progress through the story, the game will find any reason to throw you into a Tetris or Puyo battle, which kills the pacing whenever anything gets interesting. To make things more frustrating, you have a large period of time where the characters are re-introducing themselves, making this feel like a Puyo Puyo Tetris Redux instead of a true sequel.

Another point that was hyped up for this game was the world map, but it’s not even as impressive as Super Mario World from 1990. As you complete levels, other levels open up in areas on the map and, be they main levels or side stories, they’re a little bit of a pain to navigate to. While the game tries, it doesn’t really feel like I’m exploring this big world with fun characters, and sometimes the game doesn’t seem to want to take me where I want to go. Fortunately, there is another map menu that allows me to easily jump to any levels I want to replay or go for three stars. 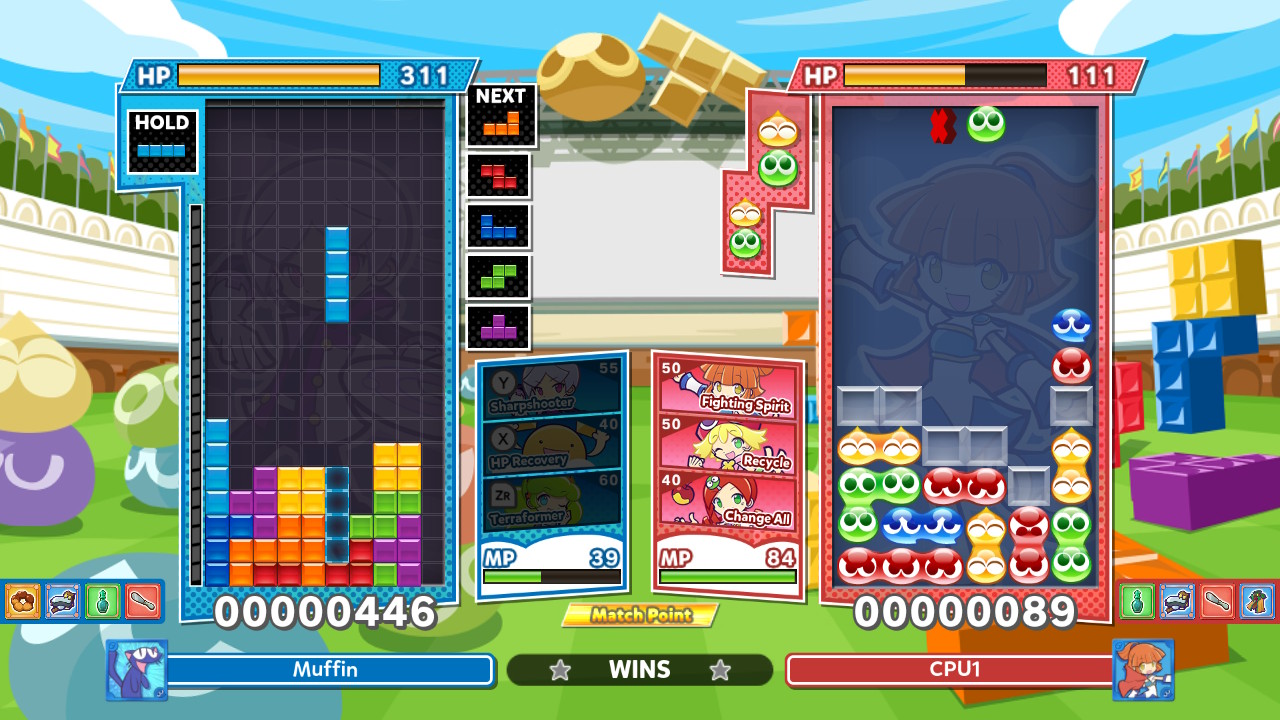 The other big addition is Skill Battles, which was, unfortunately, another letdown. During Skill Battles, you select three characters each with their own unique skills such as taking out two lines of blocks, giving health, or striking down a certain color puyo. Instead of making your opponent topple out, they have a health bar that is damaged by your combos and large plays in Puyo Puyo or Tetris. When your health bar starts to go down, you can stop it by doing a combo of your own, but there isn’t much time to defend. 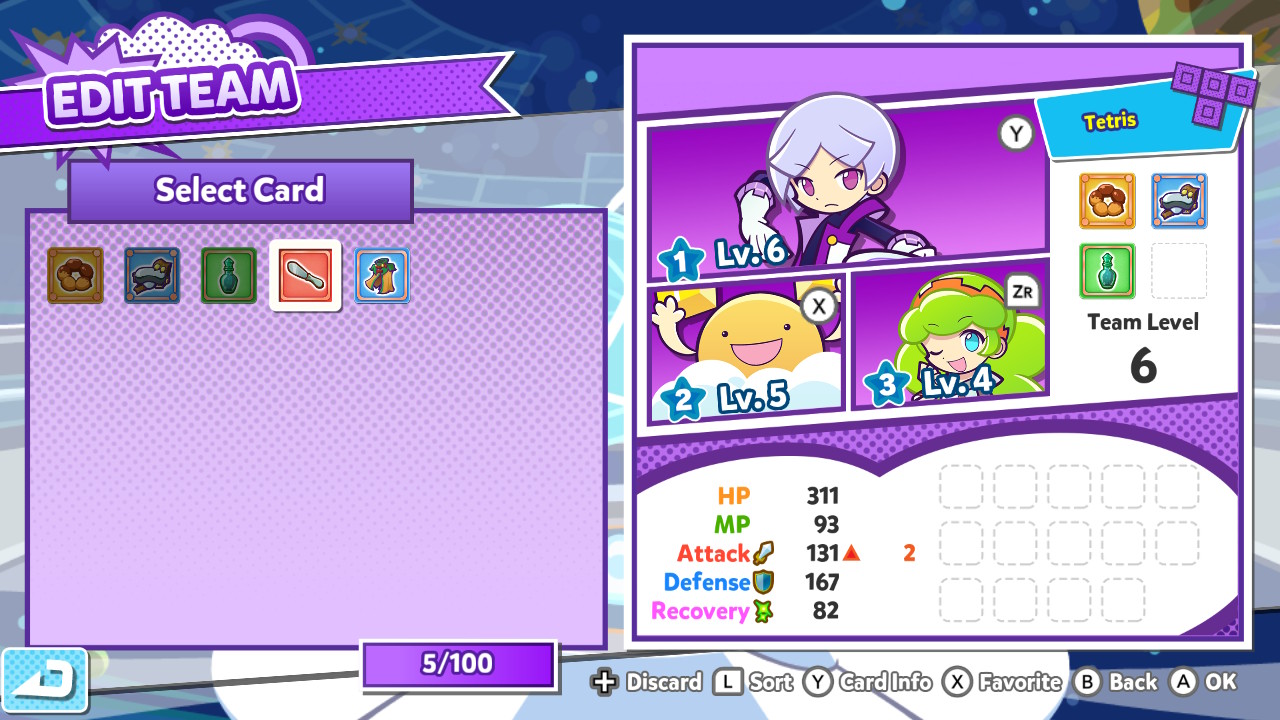 Matches are incredibly quick, especially if the characters aren’t all leveled up. Each character levels up as you play with them, meaning that early matches are going to go even faster, and choosing another character later on will sorely disadvantage you. It feels unrewarding to win a match after doing a single four chain of Puyos or one Tetris. Even the skills that clear lines do damage, which feels even less fair. 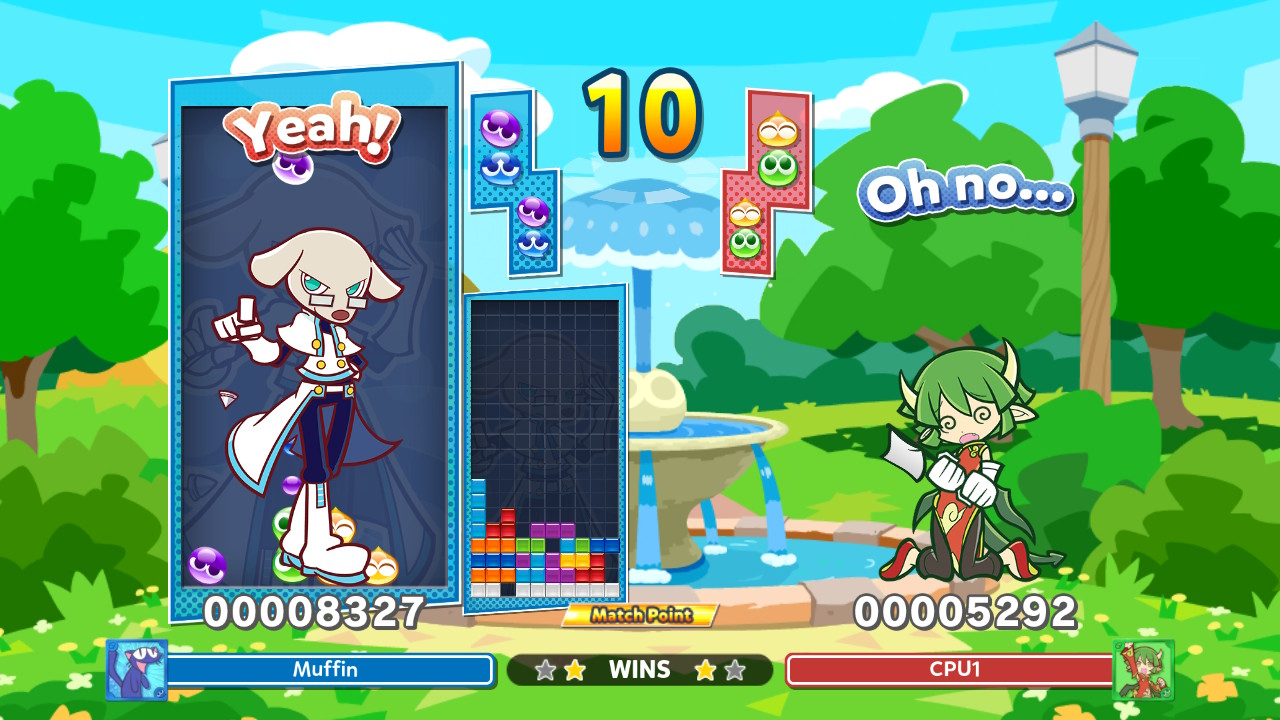 Fortunately, everything that’s carried over from the first game is still here, which means that there is a wide variety of great modes to play, especially if you’re a new player. In addition, the puzzle league online will have different rankings for which mode you play rather than a single catch-all ranking for matches. I didn’t have a chance to explore the online modes, however.

One of the best things about Puyo Puyo Tetris 2 is that it’s sure to bring life back into the community. Although this feels forced, as naturally a community behind a beloved game will get the next entry, many will be disappointed by the lack of large changes or meaningful additions. I can’t see the competitive puzzle game community being enthralled by the simplistic story, but a younger audience may like it. Basically, if you haven’t yet played Puyo Puyo Tetris and are interested, go with Puyo Puyo Tetris 2. If you already have the first game and you’re content with what it offers, there is no need for you to purchase the sequel.

Everything that makes Puyo Puyo Tetris great is here, but the additions are incredibly underwhelming. The story is just as simplistic as the first one, and the new “map” is a glorified way to show off a list of challenges hidden behind light character banter. If you’re new to the series, this would be a good starting point, but anyone content with the first Puyo Puyo Tetris doesn’t necessarily need to upgrade.

Sean Anthony likes to combine two of his passions: gaming and writing. Gaming has been a huge part of his life ever since he played his first game as a child, Kirby's Adventure. He aspires to have his name attached to an article that makes the whole world go, "Huh, that's neat, I guess."
Related Articles: Puyo Puyo Tetris 2
Share
Tweet
Share
Submit