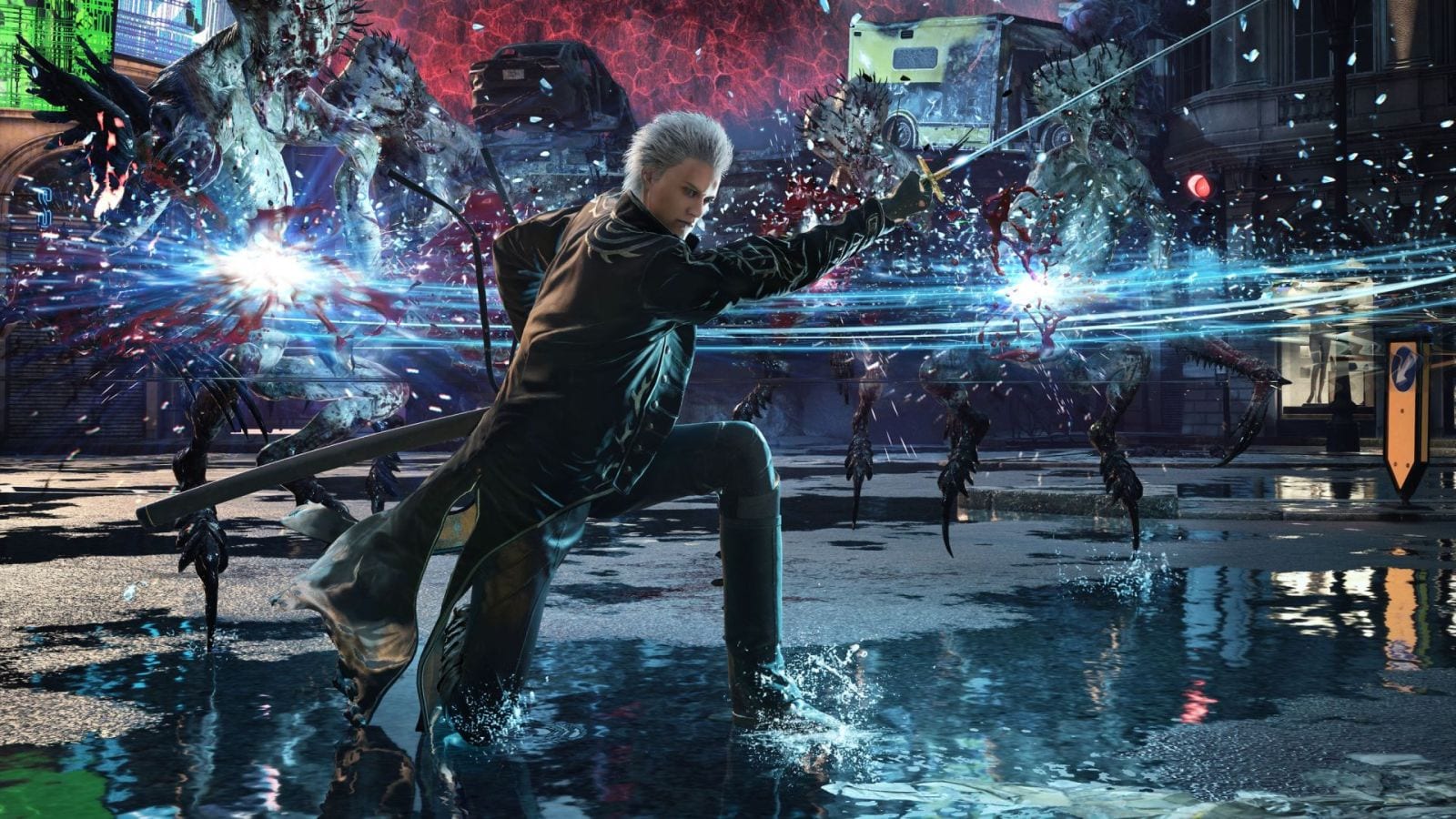 Editor Travis Northup gave us a fantastic review that I couldn’t possibly top, covering every aspect of Devil May Cry 5 on Xbox One X, so I’m not going to rehash what he’s already covered so well. Instead, I’m going to talk about the improvements you can expect to see in Capcom’s Devil May Cry 5: Special Edition. Let’s rev up our sword and jump in.

This isn’t the first time Capcom has returned to the franchise with a sort of “Director’s Cut” version of a Devil May Cry title. Like we saw with Devil May Cry 4 SE, this installment gives us a wealth of fresh content, new modes, additional difficulty levels, and retouched audio and video. It’s a laundry list of fan service, delivering the ultimate version of this high speed hack and slash.

The first and most noticeable feature update has to be the ray tracing that seems to populate nearly every surface of the game with beautiful reflections. Rain on the streets streak and distort with reflected neon, and particle effects bring the whole scene to life. These improvements come courtesy of an improved RE Engine spruced up for the PlayStation 5 and Xbox Series X. More than just shiny, this engine upgrade also brings support for up to 120fps (provided you have the hardware), as well as 4K resolutions. More specifically, you have the option of 4K at 30fps with ray tracing enabled, or you can pop down to 1080p at 60fps. Disabling ray tracing allows you to push up to 4K and 120fps. Whatever your preference, there’s a mode for you. Our capture below is 4K/30 for reference. I was rather disappointed that mirrors didn’t see an update, reflecting a smeared vague approximation instead of a crisp reflection. This is disappointing as other titles are going all in on proper reflections, banking on better immersion for a little bit of work.

While this game does look gorgeous at 4K/30 with all of the bells and whistles enabled, I did run into the occasional framerate hits. When the action gets really frantic things seem to be ok, but when an abundance of particle effects were on the screen, occasionally I’d get dips into the 20s. In a game this fast, higher framerate might be more needed, so feel free to pop down to 1080p/60 as you’ll still have ray traced lighting and reflections, but without the danger of framerate hitches.

Travis went on at length about the sound design for Devil May Cry 5, and when I played the game on PC I had to agree. I was surprised to hear some fairly significant improvements in the audio department when I threw on some headphones when the missus went to bed. The surround sound coupled with the awesome soundtrack is a pulse-pounding skull-crushing good time. I rarely make the recommendation for people to play a game with headphones, but this is one you need to at least try for yourself.

As I’m tackling the PlayStation 5 version of the game, it’s worth noting that the DualSense controller didn’t see as much love as we are seeing in other titles. Revving up your sword delivers a grumble and a “shing!” sound when fully charged. Vibration is more general as we have seen in the previous generation, without some of the nuance we’ve seen in games like Marvel’s Spider-Man: Miles Morales.

While I can’t say I saw extensive load times on PC, base PS4 and Xbox One consoles couldn’t say the same. Well, you can forget them as they are almost completely gone. Other than the initial load for the game, which is marginal at best, the load times between levels is only three to four seconds, getting you into the business of bashing beelzebub baddies faster than ever.

Saving the best for last, the biggest addition to Devil May Cry 5 is the introduction of Dante’s twin brother Vergil as a playable character once again. What I like about Vergil is that it completely changes the flow of the game. Able to engage at melee range with his fists, slightly longer range with Beowolf, his fist weapons from Devil May Cry 3, or unleash Yamato to summon V & the Familiars. I like his Iaido sword fighting technique compared to Dante’s Sparda arms and Nero’s Red Queen’s more hack-and-slash approach. In addition to being able to unleash Vergil in the campaign, you can also tackle the Bloody Palace challenge mode as well. 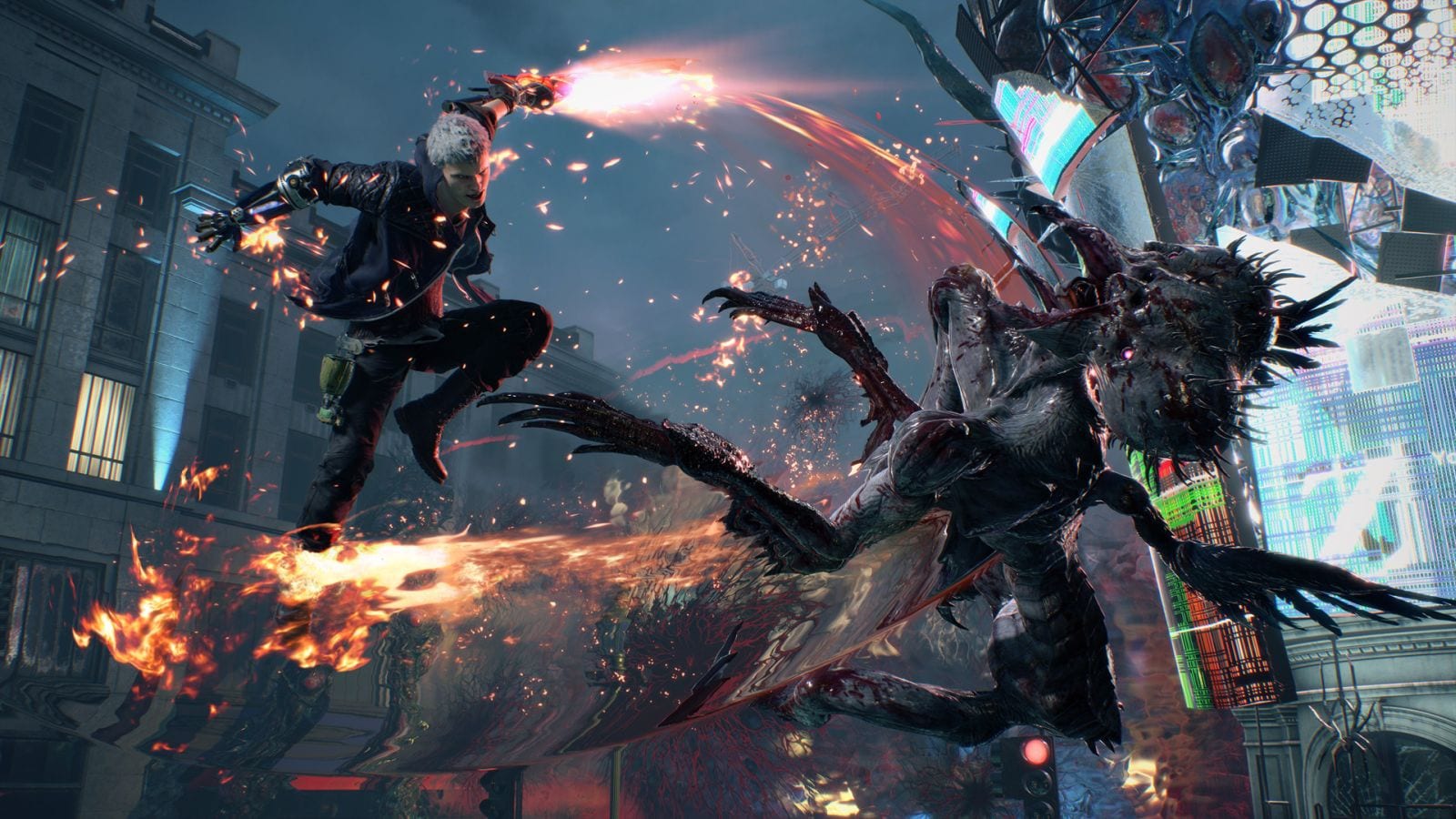 If you’ve missed your opportunity to pick up a PlayStation 5 or Xbox Series X, you’ll be happy to know that you’ll be able to pick up all of the Vergil content for $4.99 as DLC at some point in the future, so don’t give into that fear of missing out. I’m not surprised that Xbox One and PlayStation 4 won’t get the ray tracing and turbo mode as there are real performance implications, but that doesn’t excuse the fact that it won’t be patched onto the PC version. That’s simply unacceptable and stinks of pushing people towards a specific platform where their profits will be highest. Not cool, Capcom, not cool at all.

One of the complaints Travis levied against the lack of difficulty options at launch. With a nod to Devil May Cry 4, the Legendary Dark Knight mode returns, pushing the enemy count into the stratosphere and filling the screen with an obscene amount of devilry to slay. For all of the 4K resolution and 120fps talk, I think this is where the game takes the most advantage of the new hardware. Despite an absolute abundance of foes to juggle, the framerate never seems to take a wobble, which is a happy day for everyone. Similarly, fans of Devil May Cry 3 Special Edition will be happy to see the Turbo Mode return, punching up the speed to 1.2X normal for additional pazuzu punishment. 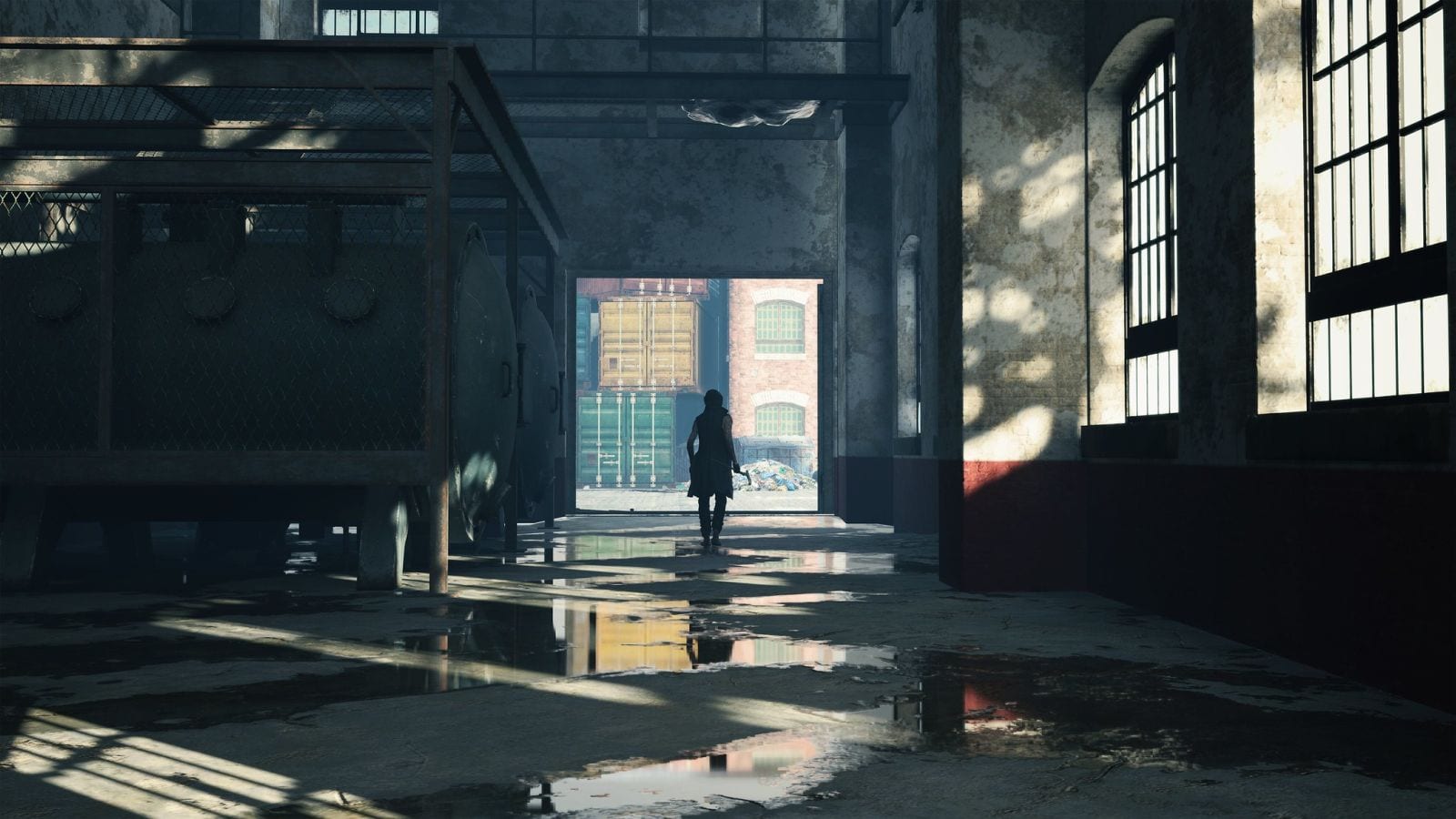 Ron Burke is the Editor in Chief for Gaming Trend. Currently living in Fort Worth, Texas, Ron is an old-school gamer who enjoys CRPGs, action/adventure, platformers, music games, and has recently gotten into tabletop gaming. Ron is also a fourth degree black belt, with a Master's rank in Matsumura Seito Shōrin-ryū, Moo Duk Kwan Tang Soo Do, Universal Tang Soo Do Alliance, and International Tang Soo Do Federation. He also holds ranks in several other styles in his search to be a well-rounded fighter. Ron has been married to Gaming Trend Editor, Laura Burke, for 21 years. They have three dogs - Pazuzu (Irish Terrier), Atë, and Calliope (both Australian Kelpie/Pit Bull mixes).
Related Articles: Devil May Cry 5 Special Edition, Let's Play
Share
Tweet
Share
Submit