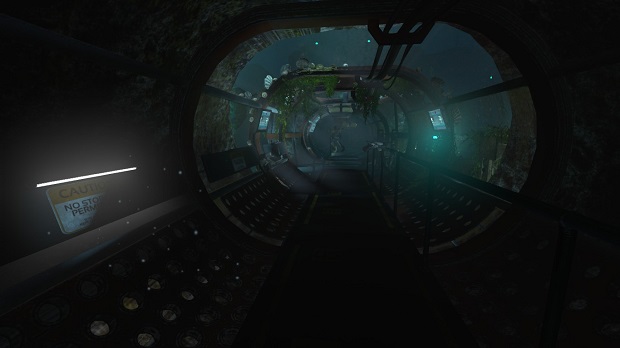 After the resounding success of Amnesia: The Dark Descent, fans have been waiting with bated breath to see what Frictional Games will come up with next. SOMA, their most recent survival horror title, is a step in a different direction that is both refreshing and utterly unnerving.

Unlike the Amnesia games, which both took place in the 1800’s, SOMA starts in a more contemporary setting. Instead of waking up in the castle or mansion of a profoundly twisted man, the game opens in the apartment of a perfectly average man named Simon Jarrett. He is a normal guy with a normal job at a bookstore, until a car accident claims the life of his friend, Ashley, and leaves him with substantial brain damage.

Simon makes an appointment with a man named David Munshi, an aspiring doctor who’s working on his thesis and intends to specialize in brain reconstruction once he’s licensed. With his help, there’s the potential that the bleeding in Simon’s brain could be better managed and his life could be lengthened tremendously. All it takes is an initial scan to get a grasp of the situation. However, what was supposed to be nothing more than a simple scan ends up transporting Simon far from home.

Gradually, he comes to discover that he’s inside a futuristic research facility – underwater. He has not only traveled geographically, from Munshi’s office in Canada to the bottom of the Atlantic Ocean, but in time as well. His mission is to figure out how to escape, and along the way piece together what happened to the staff that used to populate this place.

At one point, the facility was bustling with activity, but now it’s just a ravaged shell that’s been entirely abandoned – or has it? Through his exploration, Simon stumbles upon scattered signs of life, but none of them are what he expects or even recognizes at all.

I think that’s a lot of what this game is about. Frictional Games has a history of creating thought-provoking characters and scenarios, but this time instead of examining human nature and just how dark the heart can be, the question is, “What does it really mean to be a human?” Is it contingent upon existing within a mortal, organic body? Or is it simply possessing a soul, a personality, and the ability to feel emotions?

You contemplate where you stand on this issue as the story moves along, but so does Simon. In terms of survival horror, he is one of the more chatty protagonists I’ve seen. He’ll talk to himself in pursuit of each objective and converse with others, primarily a woman named Catherine, a researcher from a neighboring facility who could have ulterior motives beyond helping him reach safety.

The other life forms you meet may be friend, foe, or somewhere in between. Simon doesn’t wield any weapons, but he frequently has the power to determine what lives or dies. That’s another underlying theme in SOMA: the often questionable ethics of doing whatever it takes to ensure personal survival.

There are a handful of aggressive monsters you’ll encounter, with enough variety in their appearances and behavior that they aren’t like cookie-cutter creatures. In my opinion, these enemies are only frightening to an extent. They aren’t bumbling like the AI in Amnesia: A Machine for Pigs, but they also don’t instill that same frantic terror as the grunts or the water monster from The Dark Descent. Make no mistake, their presence does create some tension, but these scares are just one layer in the overall horror atmosphere of SOMA.

Machinery can be found growing out of the walls throughout the facility.

If there’s one thing Frictional Games has mastered, it’s the atmosphere. The graphics are stunning, the amount of interactivity with the environment is immense, and the soundscape is rich. All these elements combine to both captivate you and constantly keep your nerves right on the edge. Everything about the way this game was designed complements the story beautifully.

However, this narrative emphasis may be a bit of a letdown for some. Sure, the tension is there, but this game probably won’t give you nightmares. The story, with its examination of humanity and morality, is the most unnerving aspect of SOMA.

That being said, I would still call it a solid horror title. Not only is it a excellent follow-up to The Dark Descent, but it explores totally new territory in a way that’s sure to impress. Fans of psychological horror will certainly rejoice, as it makes you think and gives you the chills.

If you’re looking to get your pants scared off, SOMA may not be the game for you, but for those who appreciate its brand of subtle horror, it is truly a masterpiece. Leaning towards the cerebral, the narrative has been set up to make you ponder all of the dialogue and question every decision, even one that moves you forward. It’s a thought-provoking story wrapped in a stunning package.

Sarah Marchant is an office admin for a nerdy t-shirt company. She has a soft spot for indie games, a passion for story-driven titles, and a weakness for cooking games and anything with zombies.
Related Articles: Soma
Share
Tweet
Share
Submit