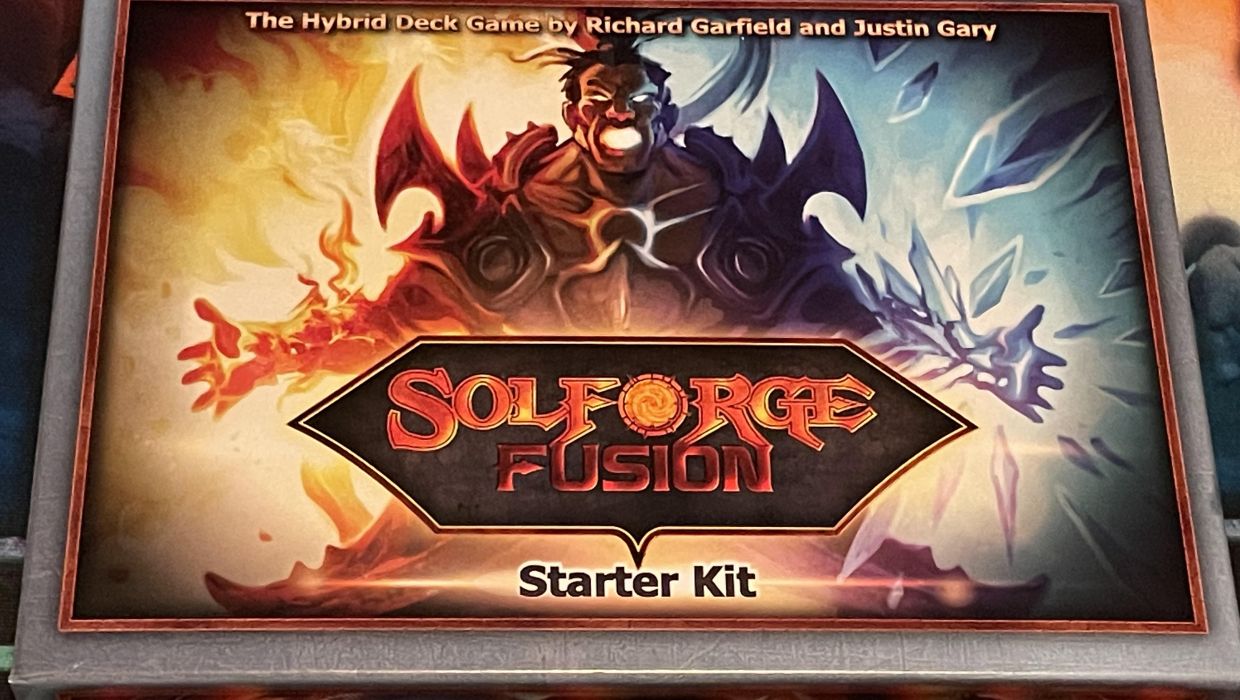 I remember seeing Solforge for the first time at Gen Con around the time it was released. Knowing it came from the same team that created Ascension piqued my interest, but the card upgrading brought an interesting twist to the digital card game. After the app was released, I logged into the game daily to get my free pack and play a game against the AI. I had a couple of favorite decks I had created, and I’d experiment with them occasionally to see if I could improve them.

Eventually another company became responsible for running servers, but the writing was on the wall that Solforge would become a piece of gaming history. I wondered if Solforge might come back physically or digitally. Years passed and I found out Solforge Fusion was being Kickstarted. It brought back memories, but I wondered how well it would translate in physical form. Now Solforge Fusion is out, but was the physical game worth the wait? 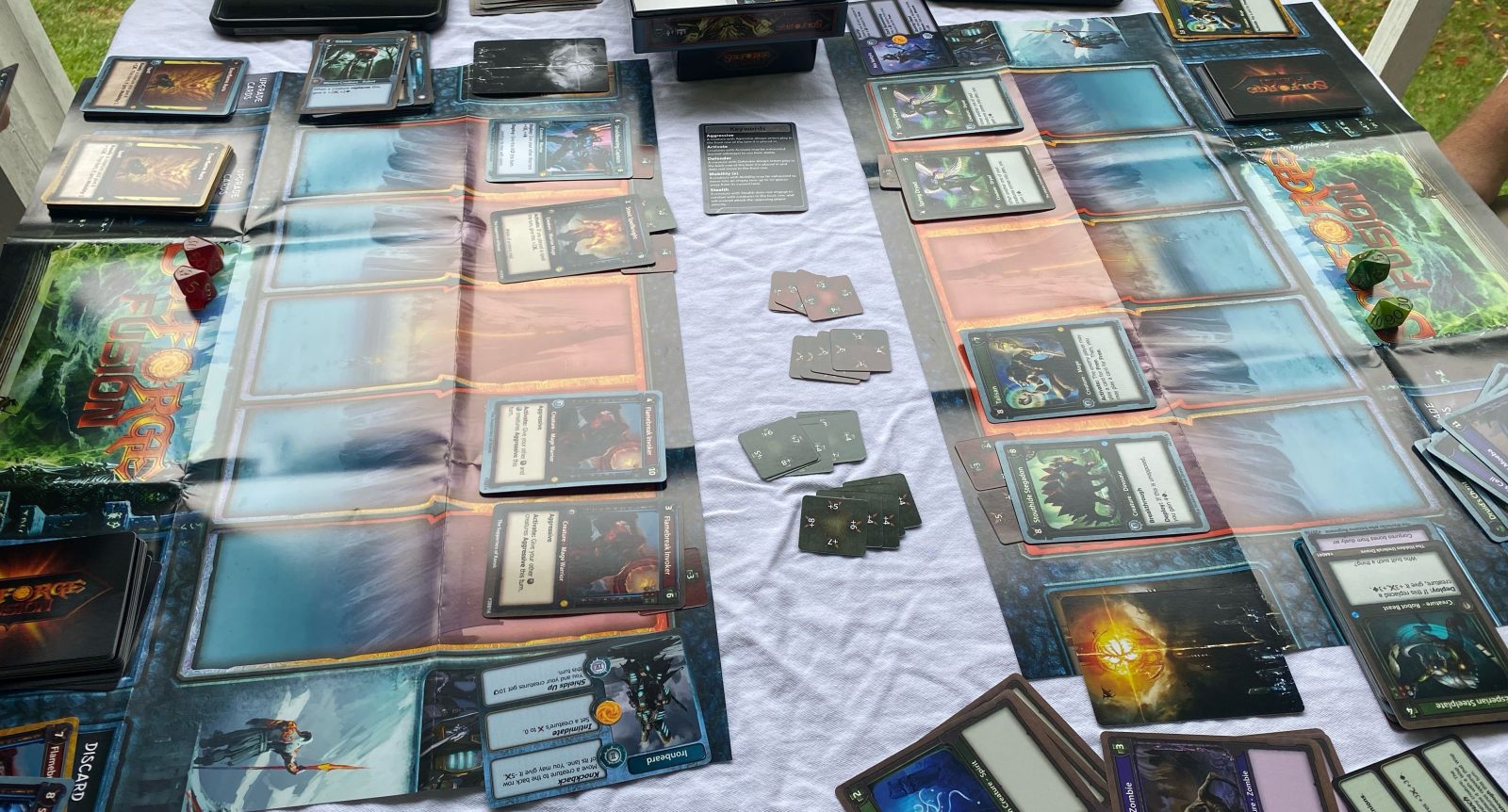 The Solforge Fusion Starter Kit comes with four half decks, one from each of the four factions in Solforge. Each half deck also comes with a unique Forgeborn that acts as a unique leader for that deck. Also included are two paper playmats, minion cards for each faction, a card with a few gameplay definitions, and some tokens representing modifications of the attack strength and health of the cards. It’s basically enough for two people to jump in and start playing.

Solforge Fusion uses technology similar to Keyforge to create unique decks. This shouldn’t be surprising since Richard Garfield is one of the designers. Each Starter Kit and Booster Box contains decks that won’t be found anywhere else. Each deck also has a card that not only lists the cards in that deck, but also a QR code that can be used to manage your collection with an account on the Solforge Fusion website. You can use this to register your decks for tournaments and other events. StoneBlade really is positioning Solforge Fusion to become a game with online tournaments as well as events at your local game store.

You may have noticed that I didn’t mention anything about instructions on how to play Solforge Fusion being in the box. That’s because there aren’t any included. Instead you need to go to their website to look at the rules. The rules are organized well, but when I went through them I had to do a lot of scrolling up and down to get to the information I needed. There’s also a separate page that has all the explanations of the icons and keywords. While using a computer or tablet might have made looking at the rules easier to read, I use my phone for situations like this. While I appreciated a few keywords were printed on a card, I wish that two reference cards with the flow of play would have been included in the Starter Kit. 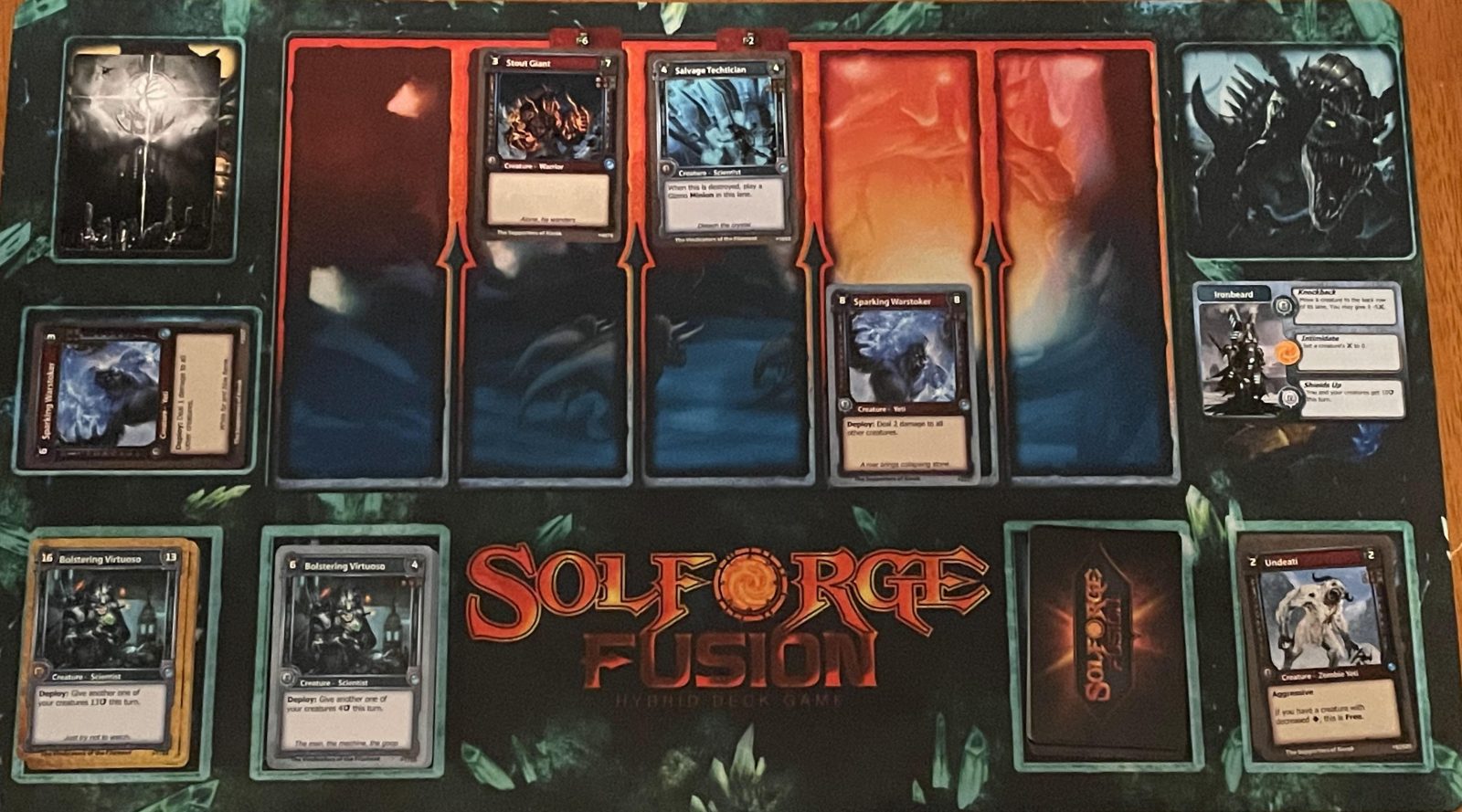 Players start by merging two half decks of different factions into a single deck. However, you don’t just take the two halves and mix them up like Smash Up. Each half deck contains thirty cards composed of ten individual cards of three different levels. The ten Level I cards of each faction are shuffled together to create a twenty card deck. Each player then chooses one of the two Forgeborn which gives the player extra abilities. Players get 50 health to start, and the object is to bring your opponent to zero health. You need to provide a way to keep track of your health. Both players draw five cards and one takes the Forge.

Cards get played in an area comprising five lanes made of a top row and a bottom row. The decks contain creatures and spells. Spells get played without going into a specific location. The Forge player places their creatures in the top row, while the non-Forge player puts their creatures in the bottom row. Cards in the top row force combat, while cards in either row defend. Only one creature may be placed in a lane, but creatures can replace another creature to go in their lane. After combat, cards in the bottom row get moved to the top row unless they are defenders. 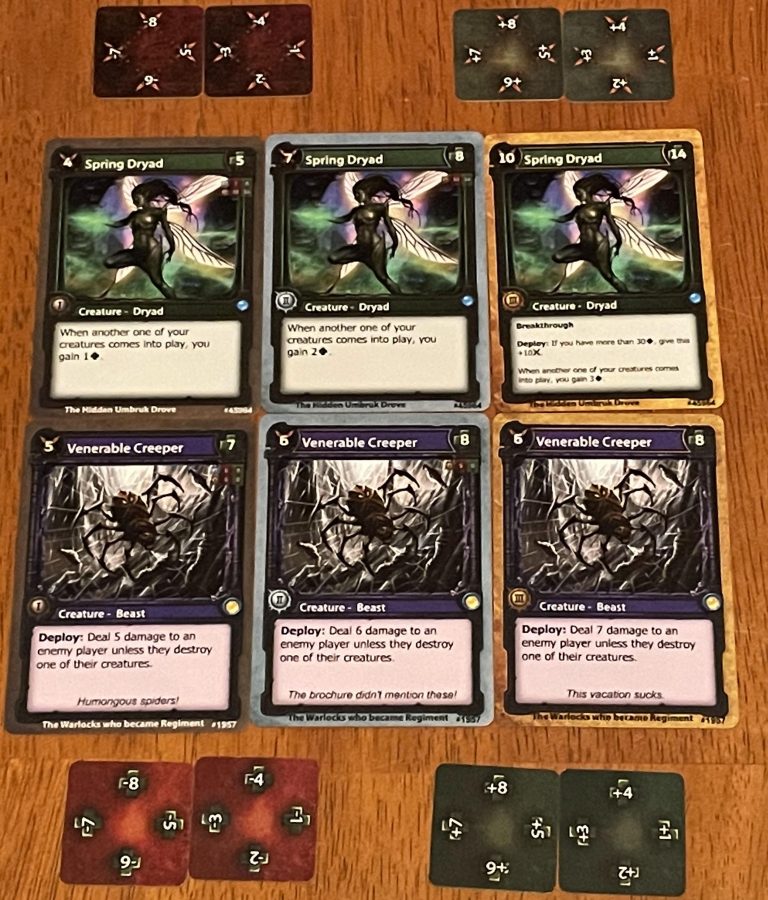 All the cards have terrific artwork, and many fans of the original online game may recognize it from the original app game. Spell cards have an explanation of what they do, while creatures have attack and health values in the upper left and right corners respectively. Since health doesn’t regenerate after combat and attack strength can change from spells, you need a way to keep track of these. Square tokens with icons showing increases and decreases in health and attack strength are provided. While I realize that StoneBlade wants to keep the cards as close to the app as possible, I would have increased the size of these values on the card. Reading them from your opponent’s cards is difficult. If you have several dice sets, I would highly recommend using that on all of the attack and health values.

After you play a card, the next level of it goes to your discard pile. The biggest draw of Solforge Fusion is this leveling up mechanic. However, I found this slowed the pace of the game down significantly. It is also easy to forget to do this every time. After every three turns you take your discard and regular deck and combine them to create a new deck for play. Unless you have cards that could be affected by the cards in your discard pile, you can wait until this phase of the game to add your leveled cards to the discard pile. It would have also been nice for some kind of turn counter to help keep track of who has the Forge and when to mix the discard pile and the decks together. 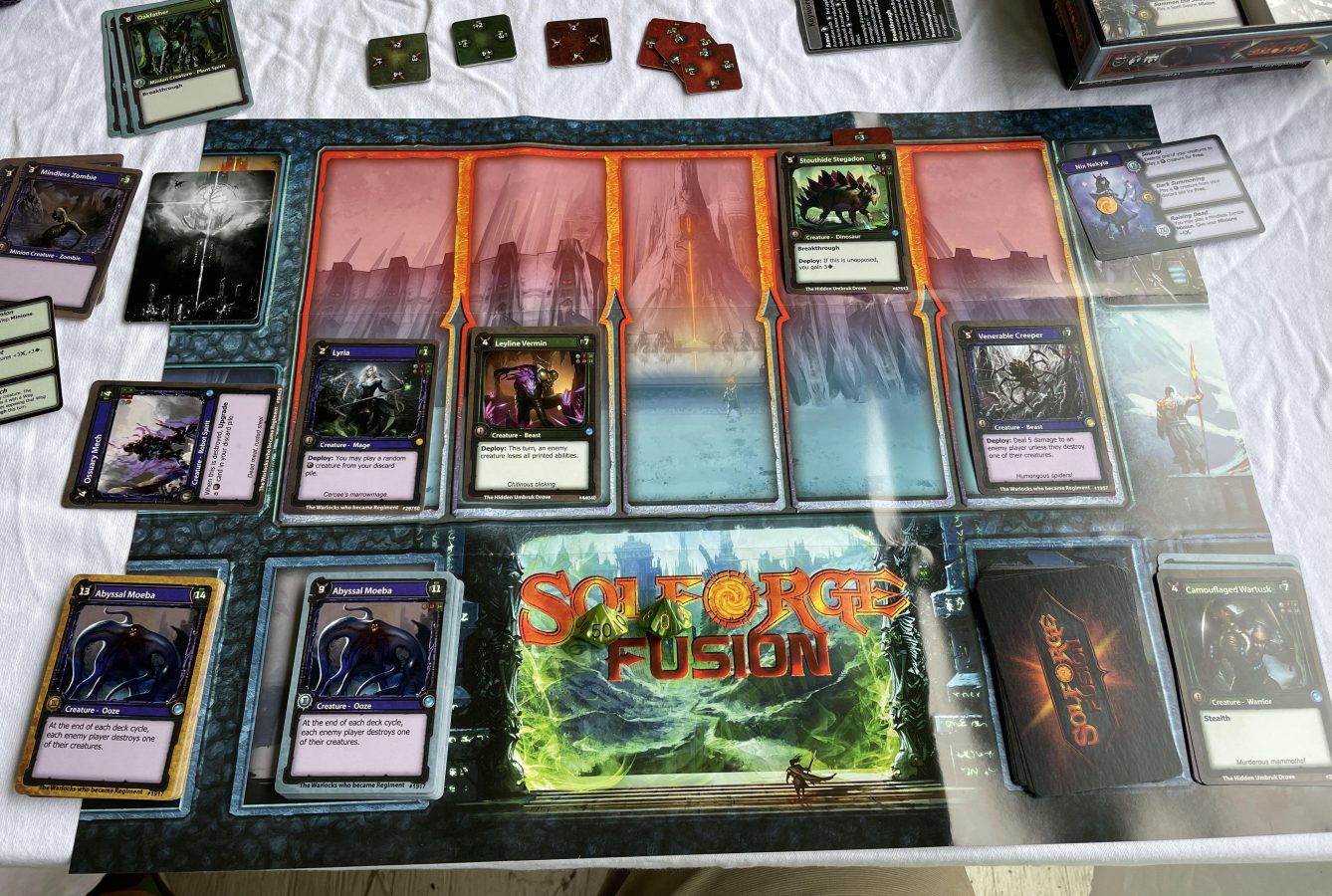 Solforge Fusion uses technology similar to KeyForge where each deck printed is unique. KeyForge went through a time of tweaking because some of the initial decks created just weren’t good. While having poor quality decks is mitigated a bit by combining two different decks, I felt like there were some balance issues with the Starter Kit I got. For instance, one of the decks had several cards for increasing the health and attack of every creature currently on that player’s board, a very powerful ability. However, another deck could play a creature from the graveyard by sacrificing one of the cards currently on the board. Having creatures in the lanes is the best way to get at your opponent’s life points, so you can see the disparity between the two factions. Later decks for KeyForge got better, and this might be an issue that I have with my set that might be prevalent in other sets. However, when you can’t swap cards or create your own deck, something like this can get frustrating.

Solforge had an issue where one player would be able to overwhelm the other player by having their lanes filled and the other player wouldn’t be able to defend themselves. When playing against an AI, that has a satisfying feeling to win that way. However, when playing Solforge Fusion against someone else, it can be crushing. I felt that my games ended like this more often than not.

I asked my friend I played Solforge Fusion with what he thought. He had similar complaints about confusion with the rules since there wasn’t a rulebook, a turn tracker wasn’t provided, and while the mechanics were interesting, having so many steps made it difficult to remember everything going on. I do think that Solforge Fusion does have a better future in digital form since it can be played on Tabletop Simulator which can help with the amount of housekeeping done in the game. However, I feel like the physical product needs to be a bit more robust with a better presentation. As a physical game, I didn’t have as much fun as I thought I would.

While not working as a Database Administrator, Keith Schleicher has been associated with Gaming Trend since 2003. While his love of video games started with the Telestar Alpha (a pong console with four different games), he trule started playing video games when he received the ill-fated TI-99/4A. While the Speech Synthesizer seemed to be the height of gaming, eventually a 286 AT computer running at 8/12 Hz and a CGA monitor would be his outlet for a while. Eventually he’d graduate to 386, 486, Pentium, and Athlon systems, building some of those systems while doing some hardware reviews and attending Comdex. With the release of the Dreamcast that started his conversion to the console world. Since then he has acquired an NES, SNES, PS2, PS3, PSP, GBA-SP, DS, Xbox, Xbox 360, Xbox One S, Gamecube, Wii, Switch, and Oculus Quest 2. While not playing video games he enjoys bowling, reading, playing board games, listening to music, and watching movies and TV. He originally hails from Wisconsin but is now living in Michigan with his wife and sons.
Related Articles: Solforge Fusion, Tabletop
Share
Tweet
Share
Submit