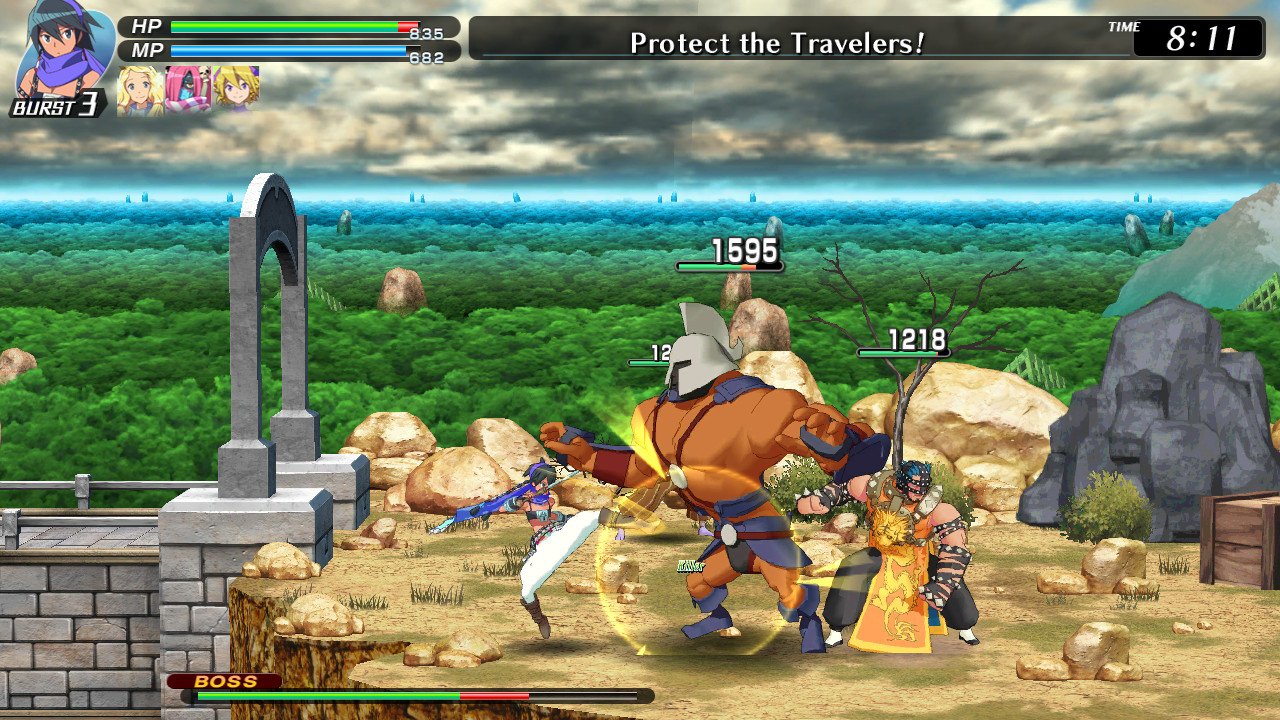 It seems that the Switch is starting to become a haven for enhanced ports and remakes, and it has its perks. While we’ve received a ton of Wii U ports (Mario Kart 8 Deluxe and Pokken Tournament DX being good examples) and even a few Wii ones (Go Vacation comes to mind), we’re also getting some 3DS titles as well. Among these is 2012’s Code of Princess, a fun, if somewhat clunky, beat-em-up with a busty protagonist and some tongue-in-cheek humor that was a little treat when it came out originally. Six years later, the game has made the jump to the Switch with some new features, and it’s still a fun little romp.

Code of Princess EX stars Solange, a princess whose kingdom is in shambles after an attack. As she flees for her life, she meets Ali Baba and a few more members of her motley crew as they find a way to solve each of their problems and get Solange back to royalty. Overall, the same story is present from the original, and it’s packed with some humorous bits throughout the main campaign; Zozo is insistent she isn’t a zombie, even though everyone treats her like one, and Master T is a rough and gruff fighting champion that has a sweet spot towards cute animals.

The cast and the story contribute to a funny adventure that had me chuckle quite a few times during cutscenes. One thing to note, however, is the lack of an English dub in this version, with only the Japanese version available. While I don’t usually harp on games that only have the Japanese dub available, the original 3DS version had a fully voiced English version included as well, with the delivery of the actors contributing to the humorous atmosphere of the game. Having this omission is rather egregious, and I hope that a future update could patch this in.

The story is mostly unchanged, and the gameplay is still just as good. The game is divided into bite-sized missions where you’ll get to choose your character and battle different enemies on a 2.5D plane with different lanes that you can move on-the-fly. You have light and strong attacks, which you can chain together to execute some special moves which consume MP. You can also execute a limited use burst move that will cause your character to grow stronger as you beat up the baddies. This simplified system feels like a basic fighting game (and coming off from Blade Strangers, the comparison feels justified), and it works very well for a beat-em-up like this. Thanks to the length of missions, it doesn’t feel frustrating when you end up dying, and you can pick up and play for minutes or hours at a time.

The Nintendo Switch version gets a few performance improvements to the whole experience, such as 60 FPS docked or portable and some other graphical boosts. I pulled out my copy of the 2012 version for comparison, and the visuals look vastly different. No longer are the sprites blocky and sluggish, as the 3DS version felt weirdly choppy due to hardware limitations. I did prefer the Switch version’s visuals, and the added polish was a nice touch.

While the gameplay is a little improved thanks to the changed performance, the switching lanes mechanic still makes the game feel a little disjointed and clunky at times; I would have preferred a free-movement system rather than a 2.5D one. While the visuals and performance have improved, it feels like the soundtrack and sound design haven’t due to the often scratchy-sounding tracks and less-than-stellar audio quality of voice lines. Finally, there are some new changes to missions, namely that the story campaign has been increased to a few more characters rather than the initial four main protagonists in the original. The multiplayer modes are vibrant and allow for co-op and competitive multiplayer (up to 2 players for local, 4 players for online), and the simple control scheme is perfect for single Joy-Con play. Considering you can play all the story missions (and some unlockable bonus missions), there’s tons of replay value included here.

While lacking in some areas, Code of Princess EX is a solid enhanced port that keeps all of the goofy charm and adds some performance improvements to the final package. This is one adventure beat-em-up fans should look at if they want a solid and humorous experience.

Elisha Deogracias is an aspiring accountant by day, freelance writer by night. Before writing for Gaming Trend, he had a small gig on the now defunct Examiner. When not being a third wheel with his best friends on dates or yearning for some closure on Pushing Daisies, he's busy catching up on shonen manga and wacky rhythm games. Mains R.O.B. in Smash. Still doesn't know if he's a kid or a squid.
Related Articles: Code of Princess EX
Share
Tweet
Share
Submit