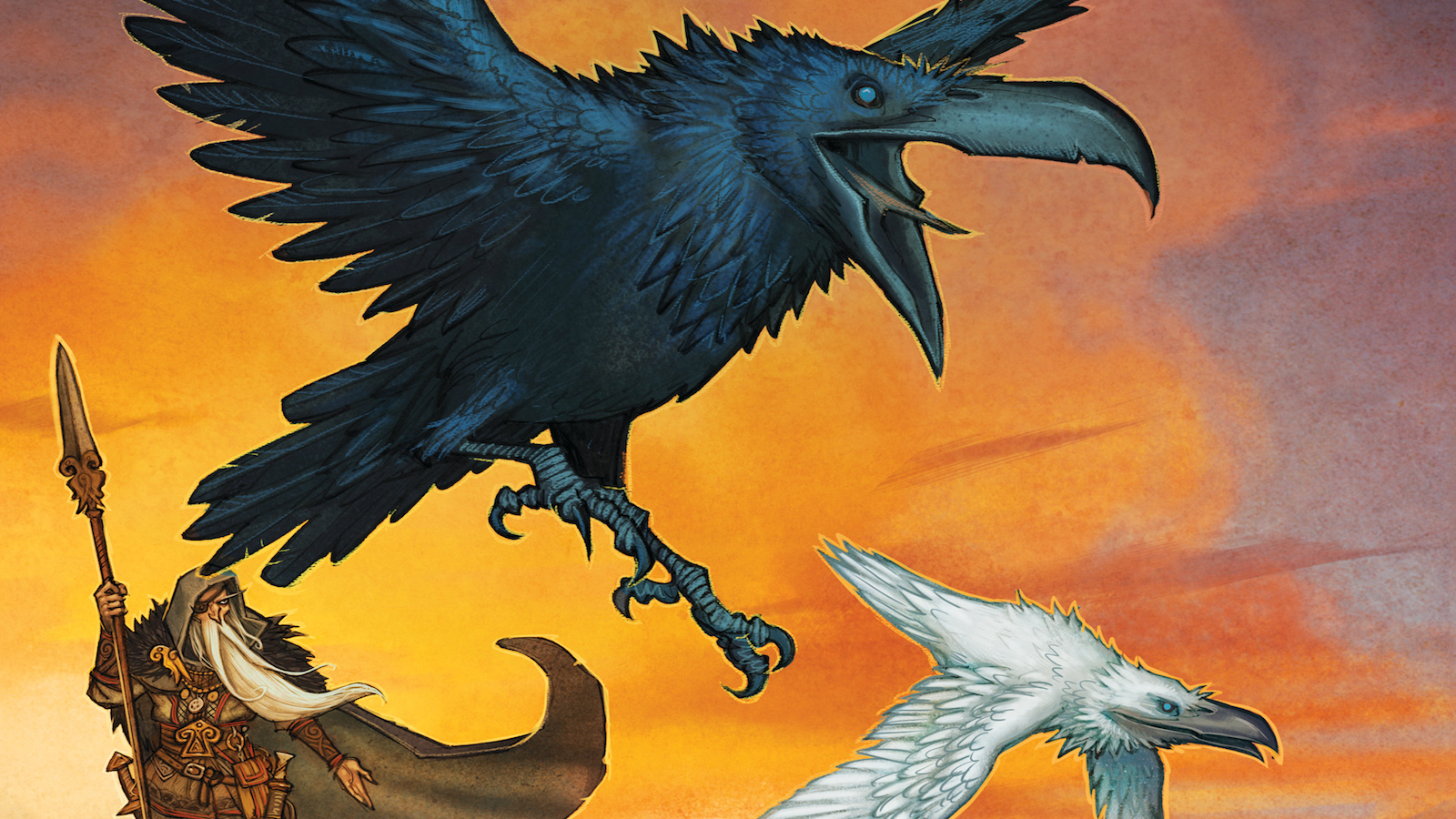 If there’s anything that can kill your love of a job, it’s the monotony of the day to day grind. When that happens, you often have to spice up the workplace with practical jokes or silly contests that hopefully stay on the right side of the line between brightening everyone’s day and receiving unemployment. Osprey’s Odin’s Ravens is about such endeavors, where even the freedom of flying around Earth to bring news of the world back to Odin has bored his ravens, Huginn and Muninn, enough that they have decided to make things interesting by turning their reconnaissance mission into a race. The result is an intriguing two-player game that will have you playing again and again.

Huginn and Muninn’s goal is to make it back to Odin first after racing around the Earth in opposite directions. The Earth’s landscape is depicted on elongated cards that have a landscape illustrated on either end. Lush forests, foreboding mountains, and golden fields are some of the terrain you’ll lay out, each wonderfully illustrated. The card layout makes sure no two landscapes end up side by side. Once all 16 cards have been arranged, you’ll have created a loop where your raven will fly down one side and back up the other.

Matching landscapes do not initially appear together at setup, but Loki’s cards can alter the board.

Each player has two decks of cards from which to draw, both of which will determine your movement each turn. One deck contains landscapes that correspond to the Earth you created. To move to the next space on your path, you must play a landscape card that matches the one you are moving into. For example, if the next space is a frosty mountain peak, then the same peak must show up on the card you want to play. You can move forward more if matching landscapes are side by side, so playing a forest card will allow you to move along three consecutive forest spaces. Since landscapes begin the game without consecutive matches, you’ll need Loki’s help to move faster.

Loki’s bag of tricks shows up in the smaller second deck. These cards allow you to perform certain actions or even manipulate the layout of the Earth cards. Some of the choices are basic, like moving ahead one, moving your opponent back one, or drawing extra cards. Others, though, reflect Loki’s trickster personality and allow you to rotate one of the landscape cards 180 degrees, which may give you a combo on one side. He can also allow you to swap two cards along the path, or slide a card out of alignment so that there’s a gap on one side. You can even delete a card completely or, my personal favorite, create an extra loop in the path. Each Loki card has two options on it, and you can only pick one of them to use. Furthermore, once you use a Loki card, it’s out for the rest of the game. There are only eight cards in all, so timing when to use them is critical, but that’s not the neatest thing about the cards.

Creating runs of matching landscapes can speed up your progress, but if not played correctly, they can benefit your opponent as well.

With the exception of a couple of the basic choices, each Loki card will affect the entire race path for both you are your opponent. If you use a card to make your outward journey easier, the result may hinder your return journey, not to mention make your opponent’s return journey easier. It may be impossible to win without using the Loki cards at some point, but how you use them is just as important as when.

How many cards you play is also crucial. You begin with a hand of five cards and may use as many as you want, but you’ll only draw three at the end of your turn, regardless of how many you played. Using all your cards in one turn may cause you to lose out on a tremendous combo in the next.

I generally hate the term “fast-paced” when it comes to games, but the cliche is apropos here. My son and I fired off three games in quick succession. The game suggests 15 to 30 minutes of game time, and I can’t imagine wanting to play any game with a person that would cause this to approach that 30 minute mark. Set up is quick, and the game has that elusive “just one more play” feel to it.

You have a finite amount of each landscape at your disposal, making hand management critical.

One of better qualities of Odin’s Ravens is the game’s balance. Races tend to come down to the wire since both sides have access to the same bag of Loki’s tricks. Every game felt competitive, and one should not get discouraged if they fall behind early. The game is obviously competitive, with ways to thwart your opponent throughout, but you never feel like you are totally out of the game.

So, does the game have a pitfall? There’s nothing particularly innovative in the gameplay, but a game doesn’t have to be innovative to be fun. Perhaps its failing lies in its price tag. $24.99 certainly puts it on the higher end of the spectrum for a short card game, but when you consider its gorgeous artwork and quick, engaging play, it’s well worth it as a two-player filler game.

Odin’s Ravens pits the Norse God’s two lookouts against each other in a race around the globe. Using Loki’s tricks, you’ll attempt to best maneuver yourself in a position to return to Odin first. Simple set-up coupled with beautiful artwork and balanced game play make this a worthwhile filler game.