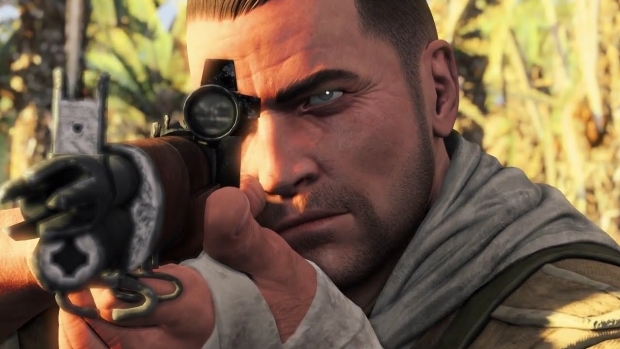 I can’t honestly tell you why I’ve never played a Sniper Elite game. The first title was released on the original Xbox, with a follow-up hitting two years ago telling an alternate version of the storyline presented in the original game. Fast forward to today and we have 505/Rebellion’s first foray into current-gen consoles and PC with Sniper Elite III.

For some backstory, I was a combat controller for the 823rd and 819th RHS unit of the United States Air Force. I’ve spent countless hours behind the scope of an Barrett M82A1 .50 caliber sniper rifle, deployed to locations with a lot of sand and a lot of forest in the war on drugs in the 1990s. Sniping in just about every shooter gets the short end of the stick, and most of the gaming public decries anyone using a rifle with any sort of range as a “camper”. In point of fact, snipers are anything but campers. We wait for a very long time for the perfect shot, we fire, we relocate, and we devastate the battlefield. During training I was told to never be captured because soldiers are killed, but snipers are tortured to death. When I saw that Sniper Elite III was going to try to capture weapon ballistics and sniper tactics more accurately, I knew I had to see it for myself.

Sniper Elite III centers on a theater that hasn’t seen a lot of representation – the North African conflict. In a desert there are a great deal of real-world factors that can affect a shot, and many of them are represented here, such as long spans of open sand, canyons, scrub brush, and little cover. In the real world, a longer shot requires detailed study of wind conditions as there are often multiple wind shifts and speeds between you and your target. These don’t make for a fun gaming experience, so they’ve dropped this aspect, but bullet-drop is alive and well.

On a longer shot you have to compensate for the amount of drop your bullet will fall as it travels to your target. When I zero my rifle I adjust until I can hit a 1” square three times without adjustment. Since you won’t be doing adjustments on your rifle, you instead have to use mil dots. In your scope, both in-game and in the real life, there are small hash marks that indicate a specific distance that you should hold over or hold under to strike your target. As an example, at 1000 yards, if you hold the center of your reticle center mass your bullet will strike 36 inches lower than that. Certainly things like bullet type and number of grains make a bit of difference, but when the first round is the one that matters, you can see why it’s important. Here’s where Rebellion threw a dash of game on top of the real world.

When I review games I typically tackle it on whatever the ‘normal’ difficulty is. At the Marksman difficulty you can hold in the right bumper which slows down time and superimposes a red triangle that shows exactly where your bullet will strike. I don’t expect anyone to model the vector math or Coriolis effect (having to adjust for the curvature and rotation of the Earth), but being able to slow time just feels like cheating. Bumping to higher difficulty takes this ability away, which feels more like sniping and less like magic.

In Sniper Elite V2, Rebellion introduced an X-Ray cam that shows the devastating effect that a high-velocity round has on the human body. Since we are all essentially a bundle of sticks inside sacks of water and meat, a piece of jacketed lead moving over 3000 feet per second is very unkind to our insidey-parts. Sniper Elite III upgrades the V2 cam with a greater amount of detail including a full cardiovascular system and more muscular structure. Similarly, hard bone structures like the skull or spine come apart in a spectacular fashion. There are organs in the body (yes, including testicles) that you can target as well. These tend to come apart in pieces instead of like a sack of fluid, but I can tell you that over the course of the eight massive semi-sandbox maps, it NEVER gets old. You can turn them off, and you can skip them with a button press, but I can’t imagine why you would – they are satisfying every time.

One of the biggest gameplay changes in Sniper Elite III is the focus on relocation. The first shot you fire in the field is typically a complete shock, difficult to echo-locate, and leaves everyone scrambling. Taking a second shot from that position almost guarantees that the enemy will be able to zone in on your position and mount an offensive. It’s for this reason that we take a great deal of time selecting the perfect blind, building a ghillie suit from the flora in the area, and we take a single shot from that position. At that point we quietly relocate and set up for any follow-up action required. Sniper Elite III follows this methodology, asking the player to move roughly 50 meters away from their previous hide and patiently wait for the enemy to give up their search. This is the only title I’m aware of that even attempts this mechanic, and the only thing that holds it back from being great is the rock-stupid AI.

Enemies in Sniper Elite III are standard fare Axis forces. You’ll see grunts, officers in their Hugo Boss uniforms, and vehicles big and small, just as you did in Sniper Elite V2. The difference here is that vehicles can now be targeted in ways that can disable or destroy them, regardless of size. There is something gratifying about ripping through an armored vent and puncturing the gas tank of a Panzer IV and watching it explode. Unfortunately this is where the problems start. Enemies will try to locate you if they spot you (indicated by a circle that fills yellow and then red to indicate suspicion or hostility.), but when the lead starts to fly they’ll attempt to take cover…or not. Sometimes they’ll crouch down in the open waiting to be shot. Further into the game you’ll encounter fellow snipers in ghillie suits, which would be terrifying if they didn’t stand in plain site and silhouetted by the horizon. In one mission they stood straight up on the upper walkways of a deserted town wearing ghillie that would be welcome on the ground amongst the plants – it doesn’t make any sense.

As I mentioned, firing the second shot will allow enemies to find you. They’ll converge on your position, shouting for reinforcements. If you relocate successfully and wait for a very short period of time, the enemies will forget you exist, cluelessly walking over the corpses of their dead comrades. On higher difficulties the enemies are a little more angry, but ultimately just as forgiving. Most often you’ll have a chance to mask your shots with noise from sabotaged generators, allied aircraft, or nearby artillery, but given how easy it is to leisurely jog 50 meters away and wait for 20 seconds to reset the enemy AI, you’ll likely stop waiting for sound masking other than for the XP bonus.

Throughout the game you’ll enjoy a vast array of absolutely hilarious Havok physics bugs. Enemies occasionally hit the ground and wiggle around like you hit them with a Taser. You’ll pick up bodies and throw them into the bushes and if they don’t hit the ground flat you may hear them flapping around for a while until they settle down. Similarly, the story in the game alternates between flat and comically bad, but it honestly never felt like it mattered. The shooting mechanics are so much fun that it was very easy to overlook the wonky physics or plastic looking (and sounding) characters.

I do have to knock the game for two rather serious issues. Quitting for the evening and then picking up the game the next day had me spawn inside of a mountain and fall through the floor to my death. I also saw enemies falling through the map, flailing and screaming to their demise as well. When i grabbed my previous save I noted that it had corrupted one of my other save files. I encourage you to save often so you don’t lose much progress.

The game features a multiplayer suite that is well-suited to ranged combat. With a total of five maps you’d expect that it’d devolve into a crazy close-range battle fairly quickly. Modes like No Cross fix this with an invisible divider down the middle leaving both teams to jockey for better long range shots with very little movement. As strong as the competitive multiplayer is, it’s the cooperative mode that is absolute aces.

Sniping in the real world is cooperative. We are deployed as pairs alternating between spotter and shooter. With the entire campaign playable with a second player, it feels a little like working with a brother in the field. In this case you are both shooters, but with a little cooperation you can spot, fire, and relocate back and forth to absolutely dominate the battlefield. Beyond the story there are also a few wave modes that gives one player binoculars and the other a rifle for a true sniper/spotter experience. I have to commend Rebellion for trying to capture this dynamic.

I’m glad that I played Sniper Elite V2 as it gave me a deep appreciation for all of the things Rebellion has brought to the table for the sequel. With expanded set pieces, better sniping mechanics, and an even more visceral look into what happens when bullet impacts blood and bone, they really have nailed that aspect of their product. While the AI may be dumb as a post, scoring a long distance headshot without the aim assist reticule and slow motion feels like you’ve accomplished the impossible time and time again. For the few things that aren’t quite up to snuff, Sniper Elite III gets a whole lot right.