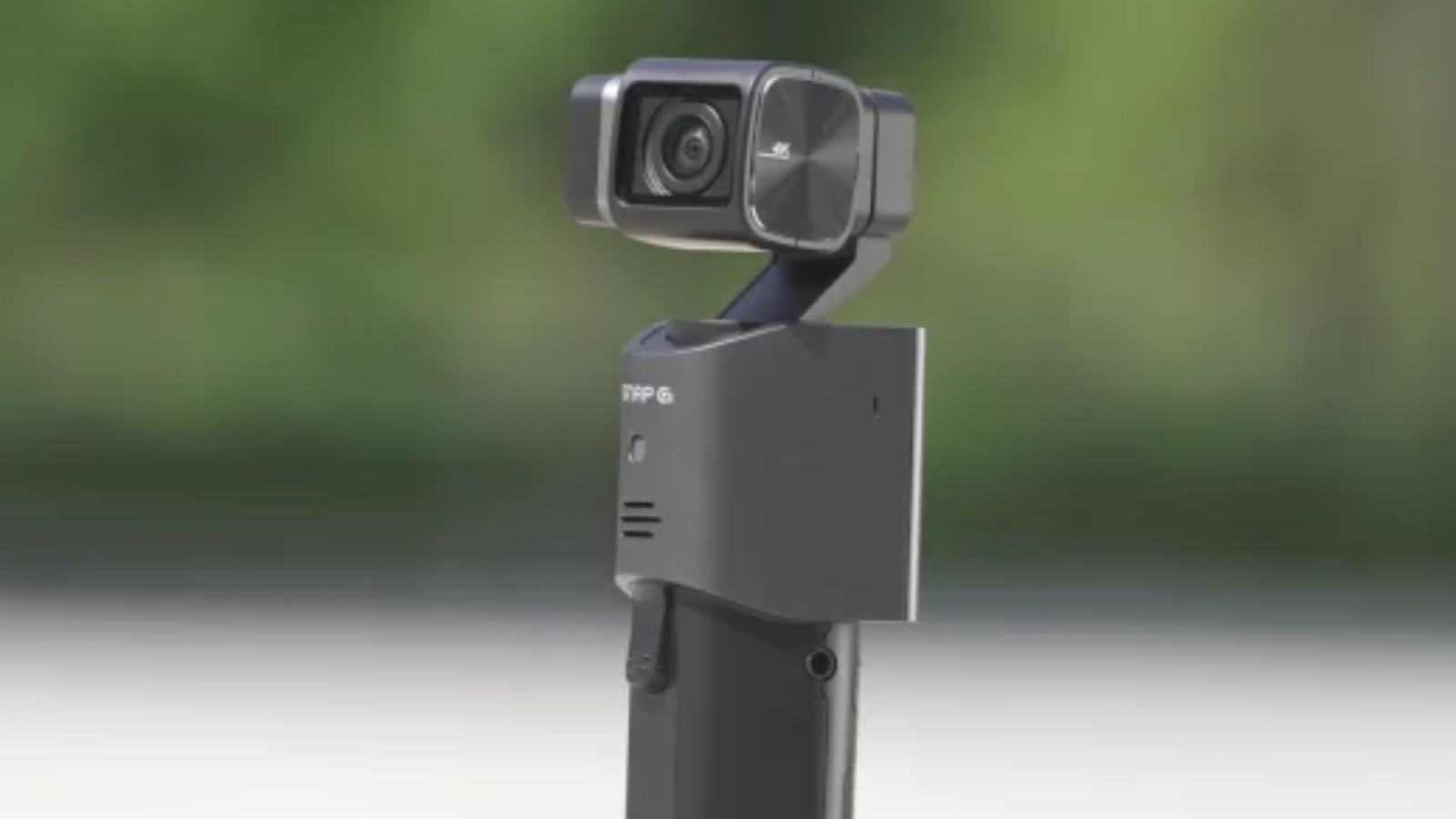 There are small form factor cameras, and cameras with integrated or attachable gimbels, but few do both things well. I’ve used cameras from DJI, GoPro, small Lumix devices, and a few from lesser known manufacturers like Leica. All of them leave something on the table. The ones with larger screens often lack microphones or playback. The ones that have microphones often lack a screen. There’s always some level of trade-off that makes it hard to recommend any one of them completely. Well, a newcomer to the space, Thinkware, has what they believe is the device to break the trend – the Snap-G. Let’s unbox it, charge it up, and see what it can do!

The first thing that is immediately obvious is that this device is compact. It’s slightly larger than the DJI Pocket 2, but unlike that device, the screen is large enough to see clearly – 2” in fact. It doesn’t sound like a big difference, but it’s hard to overstate what a difference it truly is. Like a larger LCD on a DSLR, being able to more accurately see what the camera sees (and ultimately how your output will look) means you won’t be surprised by blurry footage or out-of-frame action. Weighing just 0.63 pounds, it’s also extraordinarily lightweight, making it a breeze to carry for all-day events.

We’ll get deeper into the audio later, but it also has an external port for a microphone, meaning you can connect your favorite shotgun mic, or even a nice high end Rode, if audio is important to your output. This is accomplished with a 3.5mm audio jack at the midpoint of the body. An additional jack to monitor audio would have been a welcome addition, but the fact that the Snap-G has a small set of speakers means you can at the very least confirm that you have audio in your track. More often than not, when I have an audio issue, it’s the completely lack thereof, so just knowing that I’m recording *something* is all I need.

You will want to use an external microphone device of some kind if you intend to do interviews with the Snap-G. My Rode sounds perfect, but the internal microphone gives us some fairly scratchy audio. There’s a mount point on the bottom of the Snap-G, so your options are numerous

One of the most important key differentiators is the removable battery. The included battery is replaceable, meaning the life of the device is not limited to the life of the battery. The SG-BA20 battery is Lithium Ion, rated at 2000 mAh, and will last you about 90 minutes when recording 4K / 60 – the camera’s maximum frame rate and resolution. This battery looks a lot like the kind that somebody like Wasabi will make cheaper versions of in due time. Dropping the framerate down to 24 or 30fps extends the battery life quite a bit – nearly three hours, provided you have enough storage for it. The only hitch with all of this is that the batteries haven’t appeared. At the time of writing, I don’t have a good source for backup batteries.

If you drop the camera down to 1080p you’ll find a surprise – slow motion. In fact, it matches my DLSR – a Canon M50, able to handle 120fps at full HD. Bumping up to 2.4K will half that frame rate, as will running at 4K, but I was shocked to find that sort of functionality in this small package.

Heading into the software I’m greeted with a simple and intuitive menu array. By swiping down on the screen, I can connect to my network for live streaming, place a shooting grid to line up your subjects, adjust my brightness,mute my sound entirely, and adjust the gimbal. Within the gimbal settings are adjustments to speed, overall sensitivity, and a toggle between basic, pan, follow, and “FPV”. FPV in this case means first person view, and this is what you’d use if you were to attach the Snap-G to a drone for a first-person flyby. It can be useful for when your action scenes get hectic, allowing the gimbal to adjust more quickly.

The whole point of having a gimbal is smooth shots, no matter what sort of shaking or movement is going on with the shooter. The Snap-G does a remarkable job at precisely that. I’ve aggressively moved the device up and down in what can only be described as “violence,” and as you’ll see in the footage I’ve captured, it’s nearly invisible.. I wouldn’t do this all the time, as that’s a lot of wear and tear on the servo motors, but it’s very impressive how well the Snap-G compensates for movements both big and small.

There are a handful of tracking options to help you make the most of the gimbal motion. Holding the trigger will attempt to “lock on” to the scene, keeping it in frame. Triple clicking this same trigger will spin around the camera to face you for a “selfie cam”. There is a hiccup with this, as the image flips left to right at the very end of that action. Thankfully, this is merely cosmetic, as it doesn’t happen in the final video file, but a firmware update should resolve it. Double-clicking the trigger will snap it back to center, regardless of which position it currently resides in.

While the face tracking works well, “AI targeting mode” was a bit of a mixed bag. If you give the device a very clear target, well differentiated from any objects near it, then it’s very likely that the Snap-G will lock onto it, displaying that object in a square on the screen. Objects that don’t have a high contrast difference to the surroundings are more hit and miss. Most of the time the camera will track, but “glance away” from its lock on the target, and then snap back onto it once again. Again, we are looking at software immaturity, so this is something that could improve.

The image coming out of the camera looks slightly like it has a fisheye perspective thanks to the 133.9 degree field of view. Rest assured, this is very easily fixed in post-production with a single click in Resolve so snaps it back to full frame.

There are a number of options for camera modes beyond normal point-and-shoot. You can set these modes with a few button presses to perform an A to B record, a timed record, and even a motion controlled path record. This allows you to set a point A and a point B, and then the camera will replay that motion while recording. This is useful for hands-free recording or panoramic shots, as well as time lapse photography like a day to night transition where you want to follow the sun.

Beyond these options lie a few more adjustments, including a 3X zoom, hyperlapse, motion lapse, exposure, white balance, shutter speed, and a bevy of sensitivities across the board. Given that it’s all screen-based, it’s good that the Snap-G seems to have enough processing power and memory to remain responsive and snappy.

To help with the utility of the Snap-G, there is a ¼” standard camera screw capable of mounting the device to a tripod or monopod. Better still, it can be locked onto a Gorilla Pod, and since it’s so lightweight, you can snap it onto a fixture, light pole, or whatever else to get the shot you need. When I’m doing more run-and-gun work, I hook up my Rode shotgun mic to the bottom, giving me a gimbal, professional level audio, and excellent 4K stabilized footage without the need to carry 15 pounds of camera.

The price envelope for smaller cameras like this seems to be in the $299 to $399 range, with competitors like the DJI Pocket 2 hitting at $349, the FeiyuTech Pocket 2 finally arriving at $359, and the Insta360 bumping the top of the range at $399. I’ve never heard of Moza, but they offer a Pocket Gimbal Camera at $299. Snap-G goes head to head with the DJI Pocket 2 at that same $349 price. Pound for pound, this camera can go toe-to-toe with every one of these other cameras, and it’s doing it at a price that frankly ends the conversation, as there’s simply not a better pocket gimbal camera anywhere near this price range – not by a long shot.

The Snap-G has a ton of obvious use cases, such as vloggers and sport enthusiasts, but I can see a use case for home inspectors, realtors, or even strapping it to your pooch to get those crazy zoomies videos. Hyperlapse means you can film amazing panoramas out at the lake, or get awesome front-seat footage of your favorite roller coaster. Being this lightweight and compact, the sky really is the limit.

Ultra compact and overstuffed with plenty of features, the Snap-G is an excellent combination 4K camera / gimbal solution. With a removable battery, and a very competitive price, it just puts every other pocket gimbal camera to shame.

Ron Burke is the Editor in Chief for Gaming Trend. Currently living in Fort Worth, Texas, Ron is an old-school gamer who enjoys CRPGs, action/adventure, platformers, music games, and has recently gotten into tabletop gaming. Ron is also a fourth degree black belt, with a Master's rank in Matsumura Seito Shōrin-ryū, Moo Duk Kwan Tang Soo Do, Universal Tang Soo Do Alliance, and International Tang Soo Do Federation. He also holds ranks in several other styles in his search to be a well-rounded fighter. Ron has been married to Gaming Trend Editor, Laura Burke, for 21 years. They have three dogs - Pazuzu (Irish Terrier), Atë, and Calliope (both Australian Kelpie/Pit Bull mixes).
Related Articles: Hardware, Snap-G Gimbal Camera
Share
Tweet
Share
Submit