Little Town Hero is one of the most adorable, vexing games I’ve ever encountered. It tells a coming-of-age story featuring Axe, a young man seeking adventure while trapped inside in a small town which no one is allowed to leave. The game is a perplexing dichotomy of adorable graphics and rather juvenile, almost under-developed storytelling combined with some of the most demanding, strategic, Hearthstone-esque combat I have ever encountered. It’s a strange union which leaves the game feeling disjointed, and after dozens of hours with the game, I keep saying that I hate it, but for some reason, I keep right on playing.

The concept behind the combat system in Little Town Hero, LTH for short, is nothing short of delightful. Instead of hitching its horse to the tried and true leaves-and-gear RPG formula, Game Freak decided to forge a new system in which ideas are the cornerstone of battles. Axe begins each battle with a handful of Izzits, or ideas, which he must then use action points to convert into Dazzits, which can be used in battle. Izzits and Dazzits come in three forms: red, yellow, and blue. Blues act as support spells, and don’t have to be used against an enemy’s Dazzit. Yellows are shields, and can be used again and again, so long as they don’t take enough damage to break. Reds are attack Dazzits, and are often the most valuable, as they allow you to activate Gimicks (yes, they’re actually called that) and allow you to attack during a Chance Turn in an All Break. 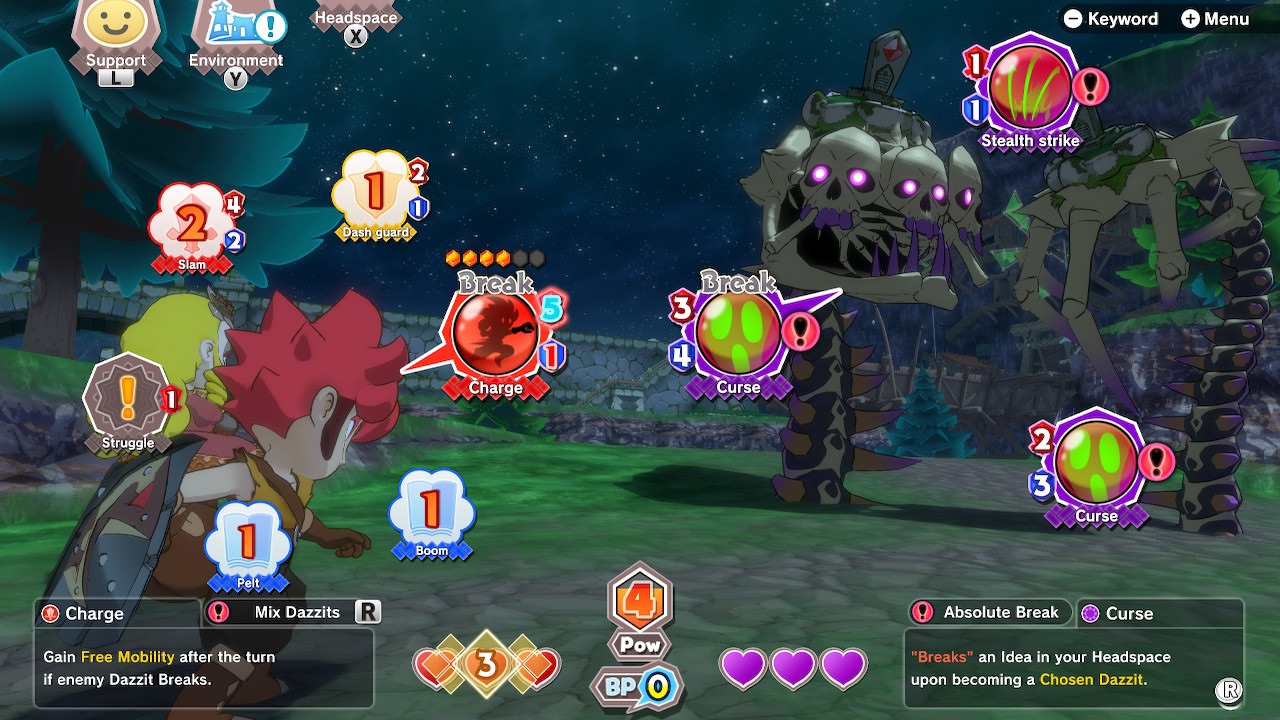 Confused? Well, buckle up, because we’re just getting started. Your goal in combat is to break all of your opponent’s Dazzits, which will trigger an All Break. During an All Break, you can then use a red Dazzit to attack their body, which will either do damage against their guts, a kind of shield which monsters have, or directly to their hearts. Wipe out all three hearts and you’ve won the battle. When you say it that way, it sounds simple. It’s not.

If you don’t have an activated red Dazzit to use during an All Break, you’ll instead be rewarded with a Battle Point, or BP. You can use BP to swap Izzits out of your Headspace, literally your brain, and into active use in battle, but most importantly, you can cash them in to restore your ideas. Keeping ideas in your Headspace is vital; your Izzits are limited, and you don’t naturally cycle through used ones, so you’ll need to either use your BP or take damage to one of your hearts, which will immediately refill your Headspace. Run out of Izzits and you won’t be able to do anything in battle except for Struggle, which will not shield you from your enemy’s attacks, and may or may not do a miniscule amount of damage to your opponents Dazzits. As even the early battles can drag on, reaching 18 or more rounds, it’s incredibly important to keep those Izzits flowing. 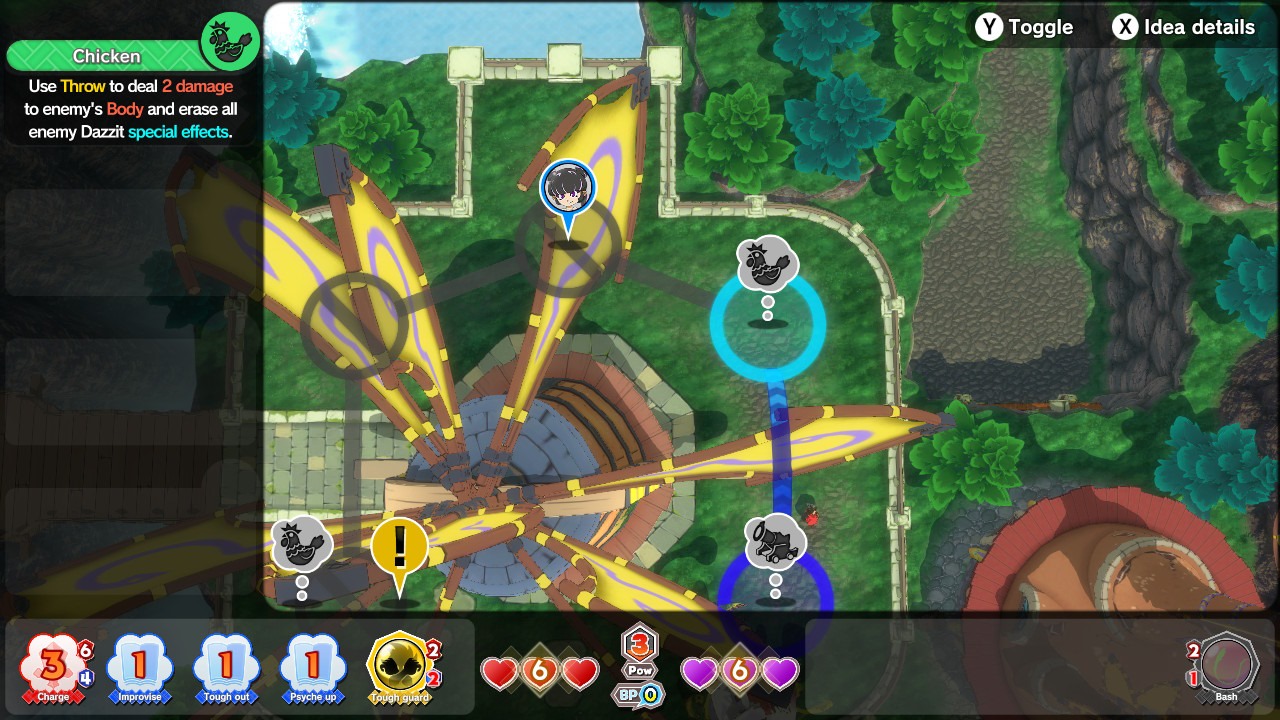 After you and your opponent have used up all of your Izzits, the round is over, and you’ll have to relocate. Each battle takes place on a map with several smaller places to fight, and unless you unlock a ‘free movement’ perk via a Dazzit’s special effect, you’ll be stuck waiting for a roulette wheel to decide how far you’ll be moving. This adds to the already drawn out pace of battle, but it does add some things of interest, as different spaces house characters and items which you can use, or can be used against you, in battle.

If you enter an area with an NPC, they can assist you with Support skills, providing a range of services including attacking or weakening enemy Dazzits, refilling your Headspace and Guts, boosting your Dazzits, or allowing you to convert an Izzit to a Dazzit at no cost. The items scattered across the map are called Gimicks, and include things like cannons, exploding barrels and… chickens. By using the correct red Dazzit, you can activate one of these Gimmicks, at the cost of not being able to use it during that turn. 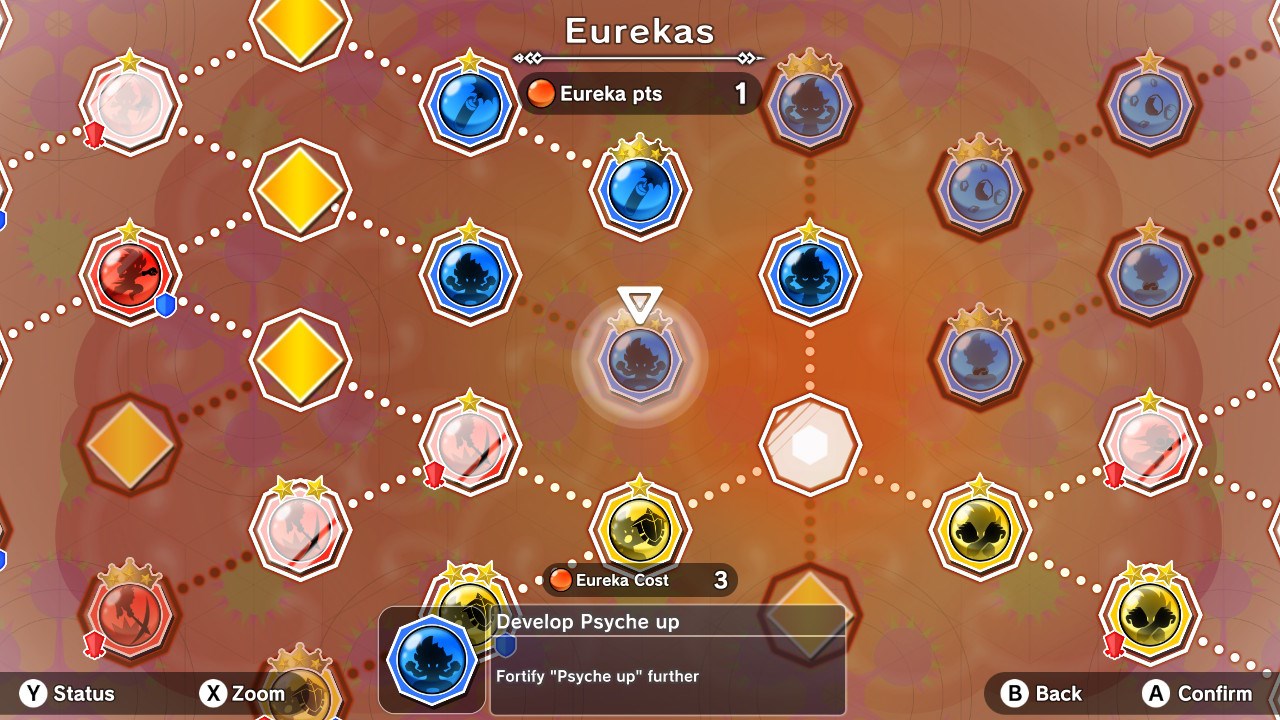 Sound like a lot? That doesn’t even cover every aspect of combat in LTH. You’ll be mixing Dazzets of the same colors, countering the effects of enemy Dazzits, taking out the support creatures which enemy monsters summon, and dealing with the unique ability of each monster. And I haven’t even gotten into Eureka points and the Final Fantasy/Dragon Quest-esque Izzit upgrading system there. This isn’t a game you can button mash your way through–you’re not likely to win a monster fight giving the game half of your attention. It’s quite the mental challenge, and will require you to think several steps ahead.

I hope it’s pretty clear by now that Little Town Hero is not for your average child. It’s honestly one of the most challenging, frustrating, chance-ridden combat systems I’ve ever encountered, and I have sunk hundreds of hours into tactical games such as Final Fantasy Tactics, Disgaea, and La Pucelle Tactics. This feels so different because it doesn’t play like your typical tactics game; despite being presented as a turn based RPG, the mechanics themselves feel very much like Hearthstone and other card games. Monster battles can easily take upwards of 30 minutes–and that’s if you don’t die after fifteen rounds and have to start the entire battle over again, which I have done. More than once. Against a sheep. A friggin’ sheep. 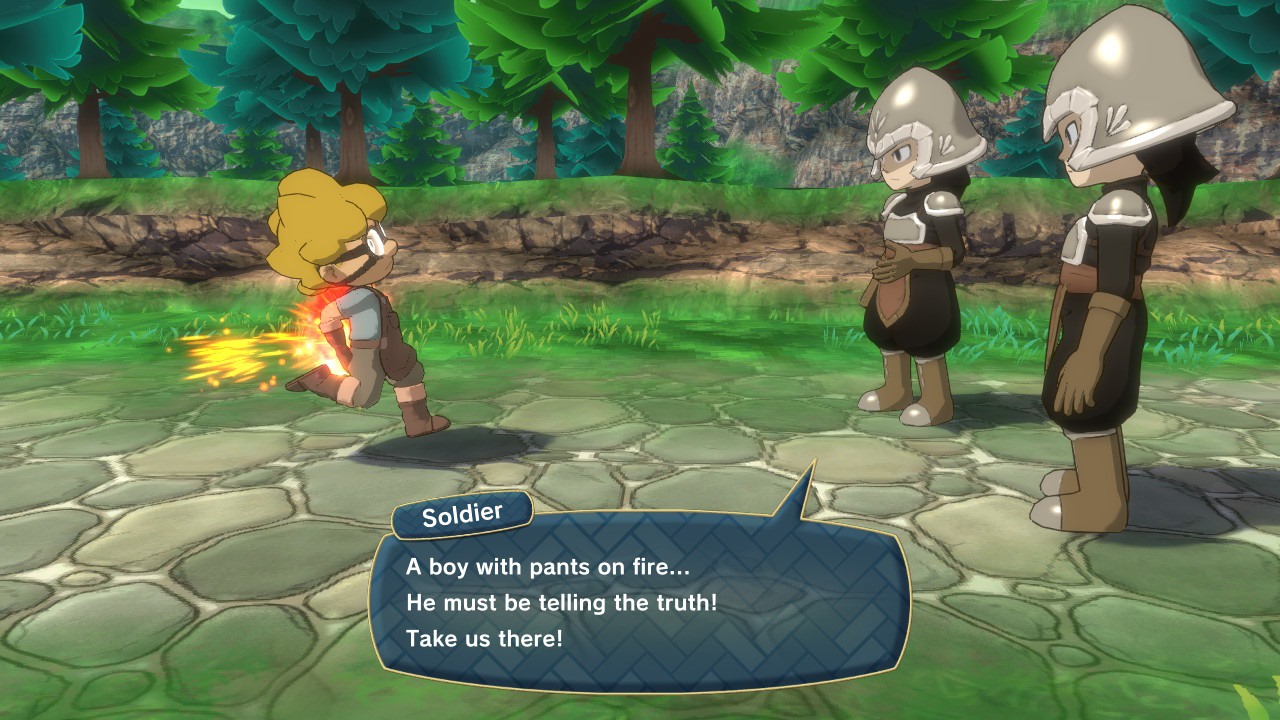 On the opposite end of the spectrum is the actual story and world of the game, which feels underdeveloped, almost like an afterthought, when compared with the games deep, intricate, thoughtful combat. Even for a coming-of-age story, the writing of Little Town Hero feels shallow, one-dimensional, and at times, downright juvenile. I might find it carefree and whimsical, if not for how grueling and mentally-demanding nature of battles. Most of the game involves Axe running to talk to one character or another in order to advance the plot, often using a glorified fetch quest mechanic in which Axe must speak to a number of people, collect a set of keywords, and then use those keywords in a guessing game where he must get the right words in the right order. He’s your typical, single-minded adolescent boy who pays little attention to anything outside of his circle of friends. Through him we learn about the town, the castle, their shared history, and even a bit about magic, monsters, and Axe’s long-lost father.

While Axe, his friends, and their families are entertaining, they are also pretty one-dimensional, and are severely limited in facial expressions. That said, the art style is beautiful, memorable, and the low-poly look of the town is very aesthetically pleasing. The town itself, unlike in Pokémon games, is quite large, making the fast travel option greatly appreciated. There is no town map, and despite this, the villagers all assume you know where things are, so I was left wandering the fields in search of the graveyard for longer than I would have liked. This also means that there are no indicators when new quests are available. Characters will have colored speech bubbles above their heads if they have a quest for you, but just to add insult to the no-map injury, these bubbles won’t become visible until you are pretty close to the character, meaning you have to spend a lot of time running back and forth across a decently sized, winding town if you want to do all there is to do. And sidequests are pretty important, unlocking things like additional Support characters, which can make or break a battle. 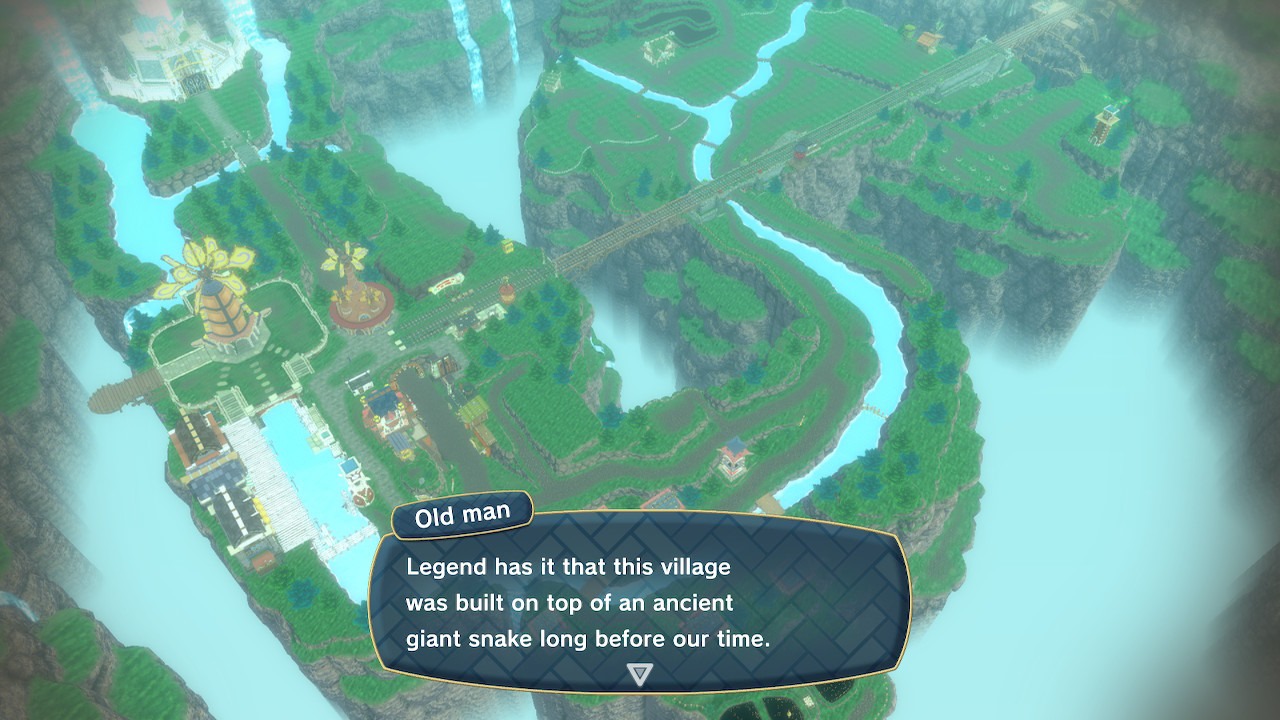 LTH does suffer some framerate problems, especially in handheld mode. The game likes to freeze up for a few moments before battles, when entering a new area, and before cutscenes. The animations are expressive, but also incredibly limited, and characters are prone to “moonwalking” due to unoptimized walk cycle animations. Each character only has one or two movements, and despite the very limited number of Izzits in the game, Axe do not have unique battle animations. With so much thought and care put into the Izzit/Dazzit system and a small map and cast of characters, it really would have been nice to see a little more thought, care, and personality injected into characters and battles.

It’s that very stock, underdeveloped nature of the town that strikes at the core of what bothers me most about the world of Little Town Hero. I come from a small town, I understand what it’s like to know everyone, to feel trapped, to want adventure and freedom, and that feeling could have been so easily magnified by simply creating a cast of semi-unique background characters and naming them. I’ve seen a dozen ‘Little Girl’ and lots of ‘Old Man’ characters; they are all visually exactly the same, and they are all lacking in a name. It doesn’t make this feel like a small town where you’ve lived your whole life; it makes the entire premise feel like an afterthought. If Game Freak had, instead, created a dozen slightly different little girl characters and named them things like “Miller’s Daughter,” “Len’s Sister,” and “Little Tomboy,” I’d be more inclined to believe that this is a small town, that everyone here knows and depends on everyone else. Instead I only see a few dozen, unidentified and unremarkable strangers running around. 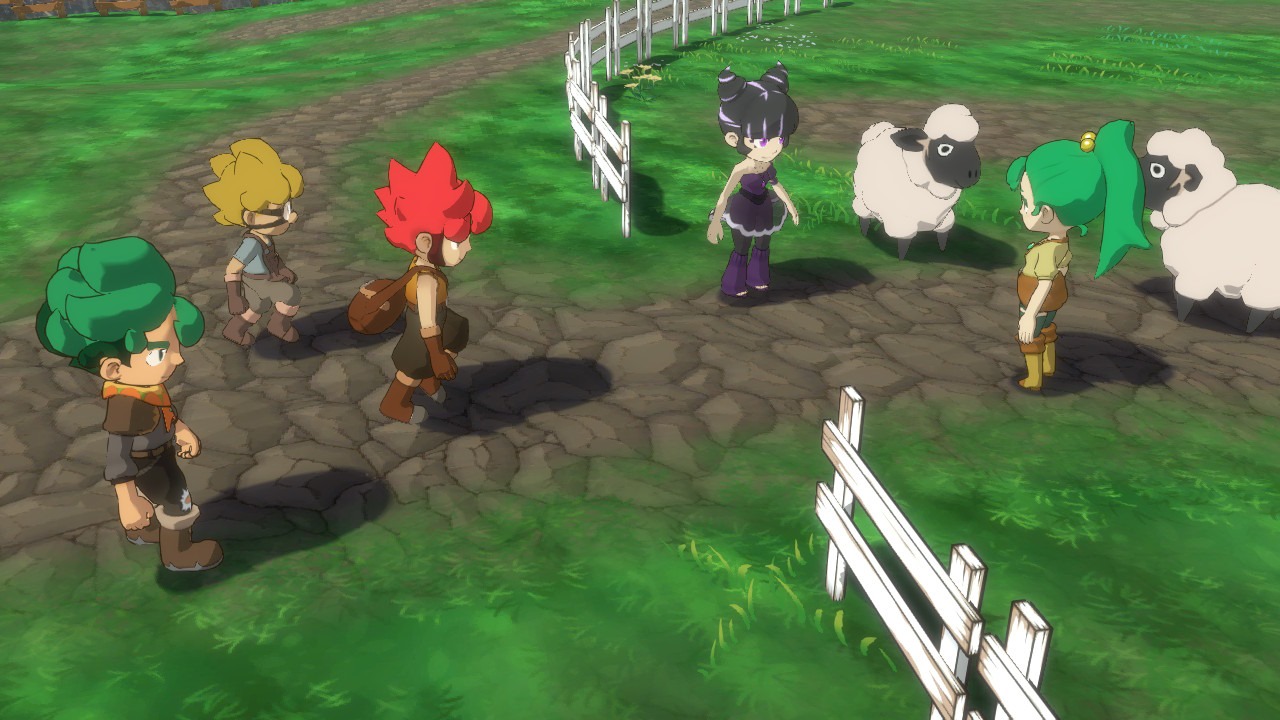 Despite all my complaints, I can’t deny that there are a lot of good qualities in Little Town Hero. It’s definitely a game for a niche audience. The story is charming and entertaining, if not more than a little shallow, and the combat is challenging, fresh, and while it is time consuming, it avoids feeling repetitive. The concept of the game delights me; that the mind is the greatest weapon, and that you really can have an adventure without having to leave behind everyone and everything you know and love. The music is great, it has great art style and amazing monster designs. It’s a fluffy, silly, happy story wrapped around an extremely challenging and very unique combat system. I really want to love Little Town Hero, but at the same time, a part of me hates playing it. That said, I find it strangely hard to put down, and I keep coming back to it, even though I complain every time I do.

Little Town Hero boasts a unique, strategic battle system that draws heavily on card game mechanics. Despite the fact that the story and art design seems to be aimed at a younger audience, combat is far too slow, strategic, and challenging to keep the attention of most kids. It’s an interesting combination of traditional RPG storytelling with Heartstone-like mechanics and difficulty that’s sure to captivate some, but will likely miss the mark for most.