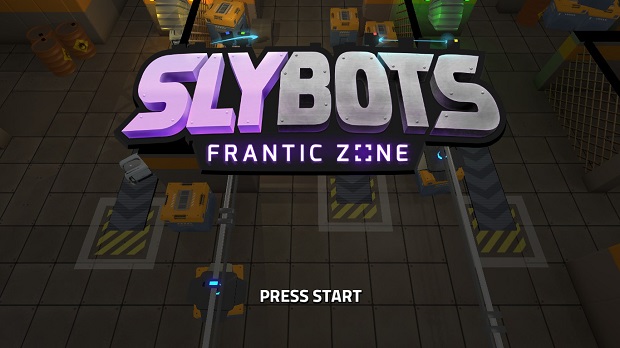 Slybots: Frantic Zone is a top-down shooter with robots by indie studio Team ERROR. It originally launched on Steam Early Access last summer under the name FATAL ERROR, connecting the developers to the community to find bugs and gather suggestions, and its official release was on January 18.

When you load up Slybots, you’ll see that there are three different game modes: Quick Match, Challenges, and Endless. I tried out Quick Match first, which offers two options: Deathmatch and Capture the Battery, a version of Capture the Flag that’s more suitable for robots. Each has four playable robots in primary colors, so you can have friends hop in or play against the AI at different difficulty settings.

I will say, Quick Matches are not enjoyable in single player. You need at least one other person to make you feel like playing more than one match. The matches are three minutes long, so while it can seem like they’re dragging when you’re flying solo, playing couch co-op really does make them feel a little frantic.

Hints and Goals pop up during Challenge stages to guide you through.

Next are the Challenges. Most of the stages listed under Challenges are not actually challenging at all; they’re mainly a bunch of tutorial stages. If I would have known that, I’d have played the Challenges first. I was initially under the impression that a Quick Match or two would be a trial by fire way to get acclimated to the game and then be prepared for the Challenges.

Regardless, the Challenges teach you the basics of the game, such as the controls for movement and your two weapons (a gun and a sword), what the different gun powerups do, and how to disguise yourself as a crate and surprise enemies. One thing they don’t teach you is that you can return to your spawn point to heal; I had to learn that one on my own.

A couple of the Challenge stages, a maze in the dark and a game of dodge the turrets, took me some time to figure out. I would have liked to see more stages like those that have puzzle qualities.

The last game mode, Endless, sends out waves of little spherical robots for you to take down. However, unlike most gameplay with waves of monsters, it isn’t about how long you can survive; it’s about keeping them from escaping through the exits on the map. Though this mode is purely single player, it’s engaging and genuinely difficult. Not only that, but the inclusion of a leaderboards feature gives you an incentive to keep playing in an effort to climb in the ranks.

Chasing down those pesky robots is harder than you might think.

Slybots can be played with a keyboard and mouse, and any players that want to join in have to use controllers. The gamepad controls are fine, but the computer controls seem less than ideal, particularly the decision to make the spacebar the way to make a selection. I don’t remember the last time I played a game where something other than left-clicking or hitting enter was required to select what you wanted, and I keep forgetting this game’s quirk.

As mentioned, the menu structure is slightly confusing. The Challenge stages should be labeled Tutorials on the main menu, instead of leaving you to discover that fact later through the submenus. Also, I understand not letting you exit multiplayer games while they’re in progress, but once you start a Challenge stage, you can’t exit that either. Only completing it will allow you to return to the menu.

All in all this isn’t a bad game, per se. The graphics are decent, the music is electronic and fits the game’s futuristic aesthetic, and I haven’t run into any bugs. On the surface it’s a solid game, but it’s had a hard time keeping my attention.

Capture the Battery really is a cute idea, but you’ll only want to play a couple of matches before moving on to something else.

Part of the reason is that it seems to be going through an identity crisis. Its advertising positions it as a great party game for you and a few friends, while some of its single player modes are what really draw your interest and present more of a challenge. I liked playing a few Quick Matches with my boyfriend, and it might be even better with more people, but my moments with those Challenge stages and the Endless mode felt more fulfilling.

Another strike that Slybots has against it is that it lacks variety. Currently, the Deathmatch mode has three maps, Capture the Battery has five maps, and Endless has two maps. Though there are four different colored robots, they all have the same stats and abilities. It’d be interesting to see more playable classes.

Even though this game has been fully released, the studio has still been busy in the background working on improvements. They’ve already put out their first update, adding some content and making changes to the UI. I would love for them to continue building onto this game, because adding more content can only help increase its replayability.

They’ve also promised to add online multiplayer within the next couple of months. That should also encourage players to spend more time with it and almost justify its $6.99 price tag.

Slybots: Frantic Zone has its redeeming aspects as both a single-player and multiplayer game, but without much variety in content or gameplay, the entertainment value wanes fairly quickly. If this game aims to have any sort of longevity, the team will need to continue pushing updates. In its current state, I am not overly impressed with Slybots.

Sarah Marchant is an office admin for a nerdy t-shirt company. She has a soft spot for indie games, a passion for story-driven titles, and a weakness for cooking games and anything with zombies.
Related Articles: Slybots: Frantic Zone
Share
Tweet
Share
Submit