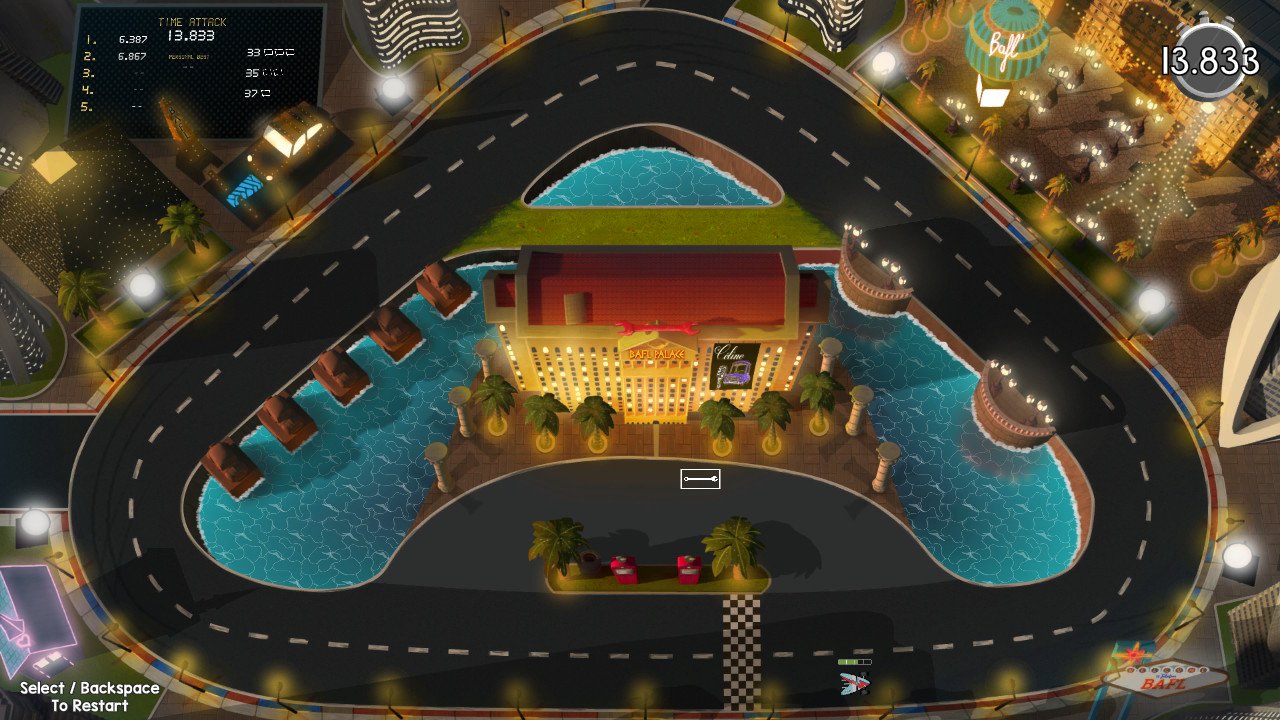 I’m surprised at the variety of racing games on the Switch these days. Other than the obvious reference to Mario Kart 8 Deluxe, we’ve got games from fellow Switch exclusive Gear.Club Unlimited to the surprisingly fun Cars 3 Driven to Win. Nothing quite beats simple, however, and Brakes are for Losers speeds onto the Switch with some frantic eight-player gameplay. Is it enough to grace the winner’s circle, or does it need to head to a pit stop?

The developers of Brakes are for Losers weren’t kidding when they didn’t want brakes. This is a racing game where you can only go forward; think the movie Speed but without Sandra Bullock. Up to eight cars race on a variety of tracks, with a button for a nitro boost that can be used up to three times before needing to recharge at pit stops which are placed on the track. You have the main championship mode, where you’ll go through a ten-track marathon racing to get the most laps in 60 second bursts, with brief intermissions in order to upgrade your car based on how you placed in the previous race. You can improve things like steering and boost power, and as a humorous in-joke, there’s an option to add brakes… the price of which is impossible to earn in a single championship run (and you can only save up within the championship itself, so no, you don’t get brakes). Bumping into walls will also put your car out of commission for a few seconds, so it’s important that you try your best to steer clear of that.

Humorous lack of slowing down aside, the game is a serviceable multiplayer title for when you want to utilize the eight-player functionality on the Switch. It’s relatively easy to play with up to eight players, and the distinct designs of the cars means you won’t get too lost with where your car might be. The single-screen top-down settings of the tracks also help with visibility, especially with a bunch of cars onscreen at a time.

In addition, it’s relatively easy to control with one Joy-Con, since all you’re doing is steering and boosting with the control stick and one face button respectively (with an optional horn button for fun). It feels a lot like moving a slot car, though you do have a certain degree of control overall. There are some customization options within the multiplayer modes that will cater to those that want to make the game a little crazier for gatherings, such as items that will impede progress of your foes or different rule sets like last car standing (which disables pit stops and is more of a test of endurance rather than speed). These little changes do make quite the difference when considering replay value.

On a technical standpoint, the game runs very well whether in handheld or docked mode, but if you have more than a few people playing, it’s best to view the game on a TV rather than on the Switch’s display. The graphics are simplistic but serviceable, and there were no frame rate drops in my experience with the title.

While it’s fun to try and maneuver your car across the tracks, the physics feel slippery and inaccurate, especially when trying to nail tricky turns. This isn’t too noticeable when playing with friends or easier computers, but the single-player content that has time trials and perfect runs (where you try to drive a set number of meters without bumping into the walls) can get excruciatingly unfair due to this. Brakes are for Losers has this simplicity that excels in a casual multiplayer setting, but falls short when trying to be a serious single-player experience.

It doesn’t help the fact that the single-player modes are the only ones where you can choose your own track, as championship and quick game modes will only allow you to select batches of tracks based on overall difficulty rather than specific tracks. This is exacerbated since the easier tracks are rather unremarkable, with not that many discernable differences between them. The sound department is rather unremarkable, since it’s the same handful of tracks over and over again. However, they convey the frantic and fast-paced feel of the game pretty nicely, so I can’t really dock any points off it, for what it’s worth.

BAFL - Brakes are for Losers

Brakes are for Losers is an adequately fun time with friends if you’ve got four to eight people ready to play, but it unfortunately crashes into a wall with single-player content.

Elisha Deogracias is an aspiring accountant by day, freelance writer by night. Before writing for Gaming Trend, he had a small gig on the now defunct Examiner. When not being a third wheel with his best friends on dates or yearning for some closure on Pushing Daisies, he's busy catching up on shonen manga and wacky rhythm games. Mains R.O.B. in Smash. Still doesn't know if he's a kid or a squid.
Related Articles: BAFL - Brakes are for Losers, Indies
Share
Tweet
Share
Submit