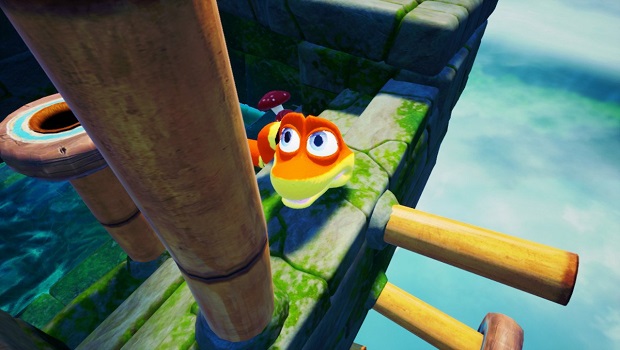 While we’ve still got a ways to go before Mario Kart 8 Deluxe races onto the Switch as the next major retail release, we’ve been treated to a slew of different Nindies in the meantime. While some have been a tad disappointing (New Frontier Days: Founding Pioneers), others have been excellent (Blaster Master Zero, Shovel Knight: Specter of Torment). Sumo Digital’s Snake Pass arrived on the console recently, and it plans to scratch the collectathon platformer itch that Yooka-Laylee seems to have started.

Snake Pass takes place in the land of Haven Tor, where a mysterious evil force threatens the animals living there. The story, for the most part, is nonexistent save for a smattering of cutscenes here and there. It’s not the game’s strongest point (even the villain isn’t alluded to until the very end), but that gets pushed aside in favor of the unique gameplay mechanics.
You control Noodle the snake as he and his pal Doodle the bird traverse fifteen different stages across four unique worlds. What’s different from most other platformers is the fact that you are a snake. As a snake, you don’t really have any limbs, so instead of running and jumping, you’re going to have to slither around in order to overcome obstacles. However, this is easier said than done, especially since the physics of slithering can take some time to be acclimated. By manipulating advance and grip buttons, you can hang onto wooden poles and other contraptions, while you can also call up Doodle to lift you up, thus making you a little lighter in case you miss a grab.

I don’t need your help, Doodle!

The brilliance of Snake Pass lies in its control scheme. On paper, it seems like an easy task, but in practice, it can get complex fast. There is dexterity required if you want to get used to the mechanics. I was struggling with my first couple of levels due to not grasping the control scheme, and kept slipping up entirely. However, once you get into the swing of things, being a snake becomes second nature. The control scheme is initially unwieldy and slippery, but ends up being one of the most entertaining in recent memory once you nail it down. By the time I finished the first world, I felt all set to tackle the rest of the game.

This is such an essential control mechanic. Take some time to get used to it.

…Of course, the game is always willing to throw a challenge your way. While there aren’t any enemies in the levels, the game includes three objects to collect: gatekeeper keys (all three of which are required to complete the level), wisps, and coins (which are optional). While keys and wisps are logically placed in easy footholds and placements, the coins are present in some diabolical locations. As such, the game can be as long or short as you want it to be; finishing the main game can take a few hours, but you can easily extend that playtime by looking in every nook and cranny for more things to collect.
While most of the challenge lies in contorting yourself in some odd positions (as a snake, not a real person, mind you), there are elements of unfairness within the harder segments. If you do end up dying (through falling into the endless abyss or burning up), you’ll have to restart from the last checkpoint you touched. However, all progress up to that point is lost, and the checkpoints are scattered far enough where it does feel like an inconvenience either risking your hard-earned coins and wisps or going back to the last checkpoint to save progress. It also doesn’t help that coins are usually in places where death is all but imminent the first couple of times.

Trying to slither away from a sticky situation, eh, Noodle?

The camera and HD rumble are also a bit lacking in Snake Pass. The former, for the most part, does its job well enough, but trying to grab some hidden coins may cause the camera to become overly finicky and unreliable. There were a couple of times I had a leap (or grip) of faith in order to reach a coin, only to plummet to my death because I was unaware that there wasn’t a pole to grab. The HD rumble, on the other hand, does feel tacked on, especially since it feels unnecessary at times. While an update rectifies the rumble a bit, it still feels a bit obnoxious, and the sound of the Joy Cons whirring is a bit of an annoyance.

Trust me, the third world may have you tearing your hair out.

However, these issues are lessened due to the game’s charming presentation and atmosphere. The game is a slow burn at times (compared to faster-paced 3D platformers), and relies more on methodical movements and logical thinking rather than twitching reflexes and breakneck speeds. This contributes to the calming and smooth nature of the graphics. While the framerate can dip at times, for the most part it’s stable docked or on handheld. The worlds are lush and peaceful, and since there are no enemies, you don’t have to worry about losing focus due to a surprise attack or pesky foes. A big plus in the presentation also has to be the wonderful score of David Wise, which highlights the bouncy yet understated demeanor of gameplay. Each world has a distinct theme that plays in the background but accents each world beautifully.
One final thing that I really loved about Snake Pass was the snake in question. While Doodle the bird ends up being the one spouting exposition, Noodle is a wonderfully animated silent protagonist with a wide array of facial animations. You can even command these animations at will through the d-pad à la LittleBigPlanet, and they’re a super cute touch. Noodle’s fun outlook on the whole situation (while being wordless through it all) contributes to the fun nature of the title, and even when he was dying, I couldn’t help but be delighted by the character.

“We can’t go on together, with suspicious minds.”

Snake Pass is a weird, wacky, and wonderful platformer with rewarding controls and great atmosphere. While there are a few minor issues holding it back, the game is a great throwback to the 3D platformers of the 90s, and a great indie title for the Switch.

Elisha Deogracias is an aspiring accountant by day, freelance writer by night. Before writing for Gaming Trend, he had a small gig on the now defunct Examiner. When not being a third wheel with his best friends on dates or yearning for some closure on Pushing Daisies, he's busy catching up on shonen manga and wacky rhythm games. Mains R.O.B. in Smash. Still doesn't know if he's a kid or a squid.
Related Articles: Snake Pass
Share
Tweet
Share
Submit