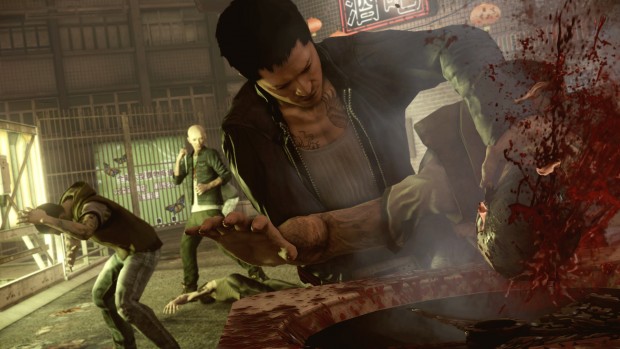 Oh, Sleeping Dogs: Definitive Edition, you disappoint me so much.

Two years ago, you came out for PC and consoles, and no one really knew what to make of you. You were an open world game set in a city rarely emulated in video games: Hong Kong. You let players fight in battles reminiscent of kung fu movies, with more than a hint of Batman thrown in for good measure. You looked fine on consoles, a lot better on PC, but your animations were kind of janky. Sure, you were rough around the edges, but you had charm for days, so we overlooked a lot of that. Heck, you let us play a karaoke minigame with actual licensed music.

So when I heard you were going to show up on next-gen consoles in a remastered edition, I was understandably excited. Finally, a chance to show the true potential of this unique, bizarre, flawed little gem, to pretty it up and give a whole new audience a chance to step into the shoes of undercover cop Wei Shen.

And yet, here we are––with a “remastered” Definitive Edition that looks about as good as it did on PC two years ago, and a terrible framerate to boot.

Square Enix came off of the Definitive Edition of Tomb Raider looking like a bed of roses. Yeah, it was $60 for a game that had been under $20 on PC for months by then, but the framerate was damn near solid around 60 (on the PS4, anyway), and tons of neat lighting effects, shadows, and texture improvements were added to make the game look better than ever––dare I say, even better than the PC version. It was a worthy port whose only real problem was that it cost too much.

If only Sleeping Dogs were that lucky.

The gameplay and narrative is all intact, so that’s at least a plus. You play as Wei Shen, a Hong Kong native who just moved back after a long stint in America. He’s an undercover cop and an extremely loose cannon who’s trying to infiltrate the Chinese gang underworld and bring it down from the inside. It’s fairly typical Hong Kong cop drama stuff, but the best part of Sleeping Dogs is how it sells its world. Stalls on street corners sell food that gives you various stat buffs. Neon lights reflect off of pools of rain. Everyone drives on the left side of the road––a minor detail that actually gave me culture shock the first time I played it.

Heck, even guns are incredibly hard to come by, instead forcing you to rely on your fists and your surroundings. Combat is more or less ripped from the Batman: Arkham series, as you perform a ballet of attacks and counters on your surrounding foes. You can also grab and throw your enemies into phone booths, sliding gates, meat hooks, garbage cans, and more. It’s not original by any means, but it’s certainly a ton of fun as you look at each fight like a mini-puzzle, sussing out how best to beat on the variety of foes you encounter.

Other open-world stuff doesn’t fare so well. Driving feels weird and stiff no matter what you’re driving. Most side missions are either simple combat encounters or fetch quests. And the various dates you go on seem like an interesting idea, until you find that they’re essentially one-and-done missions––you’ll never speak to Emma Stone again once you finish it. But all of it mixes together into this weird stew that tastes great, even spite of its own flaws. Heck, our own Ron Burke said as much in his review.

Even as strangely entertaining as the game is, the technical shortcomings in the Definitive Edition are inexcusable. The game just doesn’t look all that great to begin with, at least compared to other next-gen games (or even the Tomb Raider remaster). At a distance, things look fine, but environmental details look blurry and washed out when looking up close. To make everything worse, though, the frame rate skips constantly throughout. Whether you’re in a cutscene, or merely driving to your next destination, the game stutters like it’s under considerable strain. It’s not unplayable, but for a $60 “remaster” of a two-year-old game, these sorts of technical hiccups shouldn’t exist.

Along with the main game, you also get all of the included DLC, which includes outfits, costumes and additional story content. The Year of The Snake forms a brief coda to the end of Wei’s cop exploits in the main game, while Nightmare in North Point essentially drops all pretense and throws you into a Chinese horror film. These additions are fine, but they do little to soften the one-two punch of the game’s price and technical issues.

Ultimately, that’s what makes Sleeping Dogs: Definitive Edition so disappointing. The supposed improvements made to bring it to next-gen consoles feel non-existent, especially when the PC version did all of this and did it better two whole years ago. Make no mistake, even with its flaws, Sleeping Dogs is absolutely a game worth checking out––but perhaps it’s best to temper your expectations considerably if you plan on playing it on the Xbox One.

While the core Sleeping Dogs experience is still worth playing, the Definitive Edition is loaded with graphical issues and costs way too much for a game that plays worse than the PC version released two years ago.