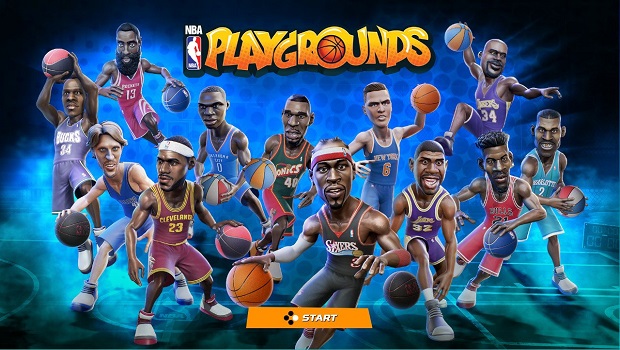 I feel like there are two types of sports games out in the market today: those that aim for the most realism in mechanics (like the Forza series), and those that focus on goofy fun. NBA Jam was one such title, bringing over-the-top basketball gameplay to arcades, with realistic physics totally out the wayside. Saber Interactive hopes to bring that arcade-style charm to NBA Playgrounds, a spiritual successor to the Jam family. However, is it a slam dunk or will you call foul?

NBA Playgrounds is a two-on-two basketball title, in which up to four players can select different athletes from thirty real-life teams. It’s a good thing that Saber got the NBA license, and the teams are a well-rounded bunch, from the Golden State Warriors to the Miami Heat. Additionally, there are legends you can unlock like Allen Iverson and Larry Johnson, so basketball fans old and new will recognize some of their favorites. You’ll unlock different players by winning exhibitions and tournaments through player card packs, and you’ll also grab some XP to level up your players.

While NBA Playgrounds adheres to the basic tenets of other basketball simulations, it does employ a cartoony bobblehead/chibi style, as well as a lottery pick system: by stealing the ball from opponents or making baskets, you’ll gain some gauge that will go towards a special powerup; once it fills up, you can unleash different types of skills, from increased movement to reducing your opponent’s shot clock for a set amount of time. You can also coordinate alley-oops and slam dunks with your partner (either through AI or with another player), and these animations are exaggerated and entertaining. The presentation doesn’t take itself seriously, with the opening song of the game being a tongue-in-cheek tribute to the 90s. These style changes separate NBA Playgrounds from the other basketball games out there, and create a fun, lighthearted romp that’s sure to please those who grew up with NBA Jam.

…That is, if you can stomach the myriad of problems included. The game does run smoothly on the Switch, but the graphics and sound design don’t pack much of a punch. The announcers who do play-by-play commentary are humorous at times, but can end up grating and annoying after a couple of hours. Additionally, there’s only two real modes, an exhibition and tournament mode, and while they’re functional, if you’re looking for a fleshed-out career mode here, you’re out of luck. You can unlock more players and venues through tournament mode, but it doesn’t feel like you’re progressing in-game. In addition, the lack of a tutorial mode is very egregious, since the game only introduces mechanics during your first exhibition game. You’re on your own after this; would it have been too much to ask to keep these controls up for future exhibition matches? It took me a good hour or so to even get the mechanics down, much less win on easier difficulties. I wish there was a tutorial that you could revisit, but until then, I guess looking aimlessly at the control screen will do.

Prepare to refer to this screen A LOT if you haven’t picked up the basics.

Unfortunately, the Switch version of the game exacerbates these problems even more with the exclusion of some fundamental features. At the time of writing, Saber announced patches for the game (which have been implemented on other platforms) that would include online play as well as an increased roster of characters. While they have promised this a couple of weeks after the game’s release, they still haven’t updated the game yet (though you can still score a copy of Shaq Fu: A Legend Reborn if you purchase this now, so there’s an incentive). The added content would have been great, especially since this game is better with friends, so it seems local multiplayer is the only option on the Switch for now. It feels like this version is the one that got the short end of the stick, and while portability is always a plus, it’s definitively the worst version of this game.

The Nintendo Switch version of NBA Playgrounds is probably the most inferior. While an entertaining romp with fun mechanics, a lack of content and fundamental patches keep this from being a slam dunk.

Elisha Deogracias is an aspiring accountant by day, freelance writer by night. Before writing for Gaming Trend, he had a small gig on the now defunct Examiner. When not being a third wheel with his best friends on dates or yearning for some closure on Pushing Daisies, he's busy catching up on shonen manga and wacky rhythm games. Mains R.O.B. in Smash. Still doesn't know if he's a kid or a squid.
Related Articles: NBA Playgrounds
Share
Tweet
Share
Submit