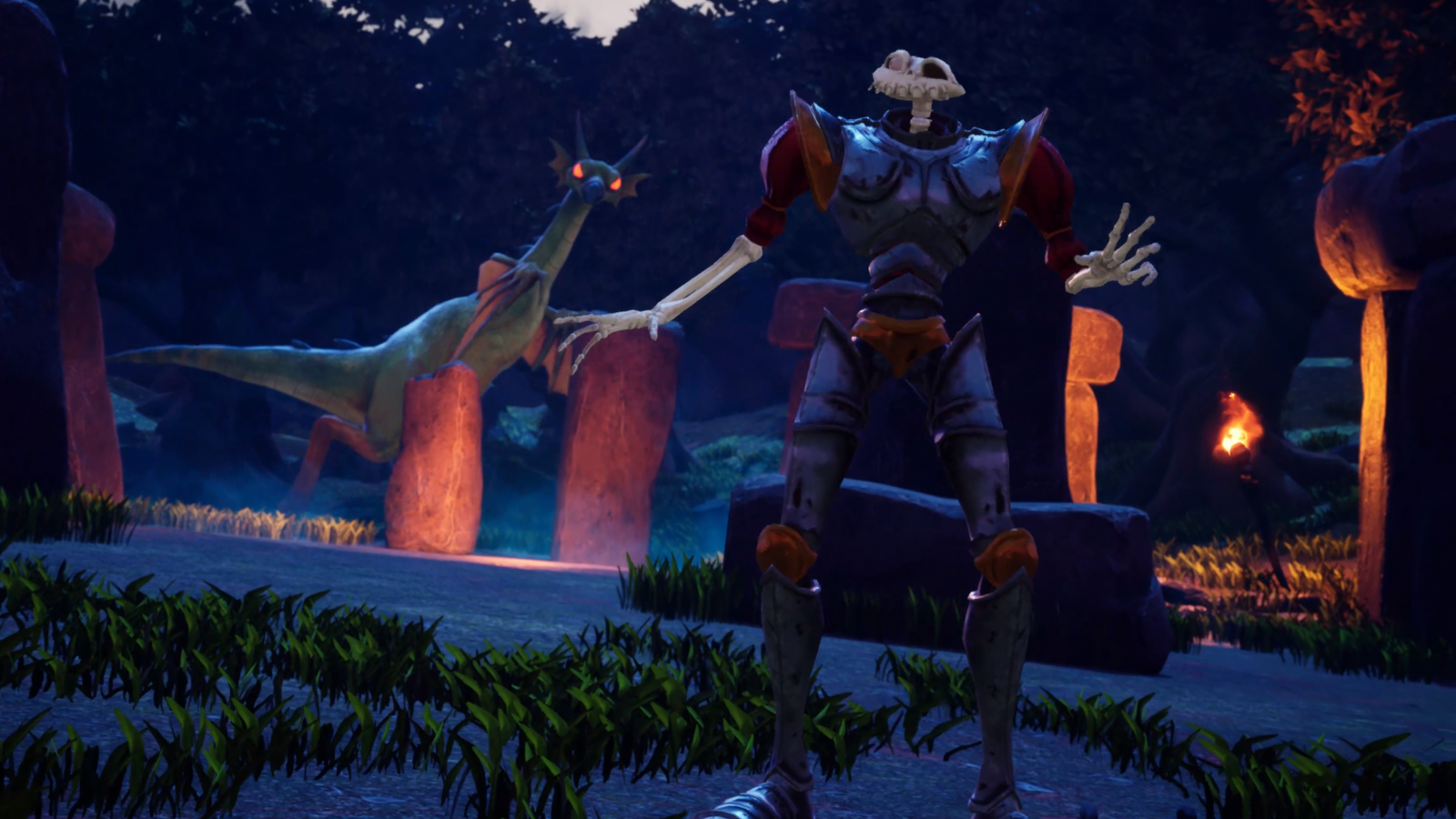 I played the original MediEvil exactly once when I was a kid. My mom’s friend’s daughter (try saying that three times fast) brought over a PlayStation demo disc and wanted to show us her favorite game on it: MediEvil. Being a lifelong coward, I was terrified of pretty much everything on screen and went back to playing Tomba! 2. Now, as an adult, I can see that there’s absolutely nothing to be scared of in MediEvil, in fact it’s actually quite a charming game.

Sir Daniel Fortesque is regarded as a hero in the kingdom of Gallowmere: the knight who killed the evil sorcerer Zarok 100 years ago. In reality, he’s no hero at all. He died in the first volley of arrows in the charge on Zarok’s castle. But now’s his chance at redemption! Zarok is back and unleashing chaos on the kingdom, and it’s up to Dan to overcome his cowardice and rise from his grave to stop the sorcerer. That’s pretty much all there is to the plot, though. You do get a lot of funny narrations from books scattered about the realm and talking statues. The humor is plentiful, and all of it is amusing or at least charming — it’s probably the best part of the game. The game is constantly poking fun at every character, mostly Dan, and that motivated me to explore every inch of the levels so I wouldn’t miss any jokes. 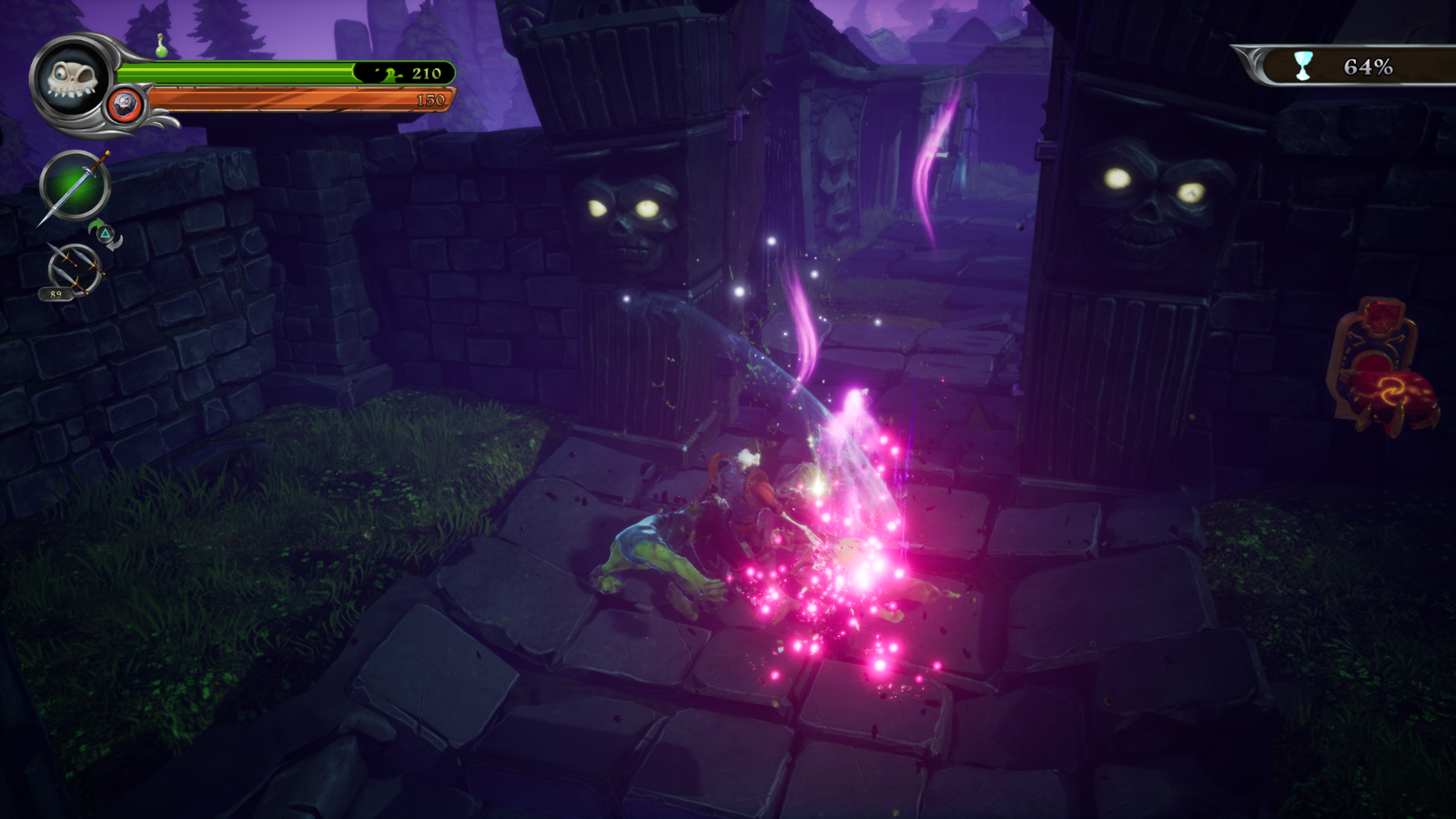 Sir Dan explores each level by platforming, solving puzzles, and defeating undead foes. Combat feels appropriately loose, considering you’re playing as a skeleton. Dan swings weapons about wildly and can’t take too many hits, thankfully he’ll acquire a massive arsenal throughout his journey and will automatically use life potions when he reaches 0 HP. Lacking any muscles, however, he can’t jump very high or far, making platforming frustrating, especially later on. Puzzles are fairly standard, mostly just a “find the key” affair. Individually, each of these would make an average game, but together somehow MediEvil manages to keep each of them engaging throughout its 20 or so short levels. The platforming is still rough, this is a PS1 game after all, but it’s tolerable when held up by the combat and puzzles. You’re encouraged to explore and platform through the optional chalices, which you can pick up after killing a certain amount of enemies in a level and subsequently grant you new and powerful weapons upon placing them in the Hall of Heroes. Weapons like the boomerang-ing axe (We know where Kratos got it from) and the enchanted swords can be fun to use, but unfortunately many become obsolete very quickly. I enjoyed the club and hammer’s wide area of effect and ability to destroy certain objects, but about halfway through the game they stop being useful in both combat and exploration.

After finishing some levels, the game opens up and lets you tackle levels in any order you wish. I really enjoyed having this freedom, but it also disappears about halfway through the game. It’s not too big of an issue, though: each level is short enough to not get sick of your surroundings, and the second half provides a more steady difficulty curve. Each level is nice to look at, not the prettiest visuals the PS4 has to offer or even out of the recent remakes from it’s PS1 contemporaries, but they all have a halloween charm to them. Character animations are very expressive, Dan is constantly fidgeting around, which gives the inhabitants of every area a nice character. The way you view these environments and characters can leave a lot to be desired at times. The controllable camera works great when you can use it, but in a few of the fixed camera sections it frames the action very poorly, causing you to walk into more than your fair share of pits. Whenever the camera has to cut between the two styles, it quickly fades out and back in, this caused me a lot of disorientation throughout the game, especially when trying to use the close up “Dan Cam.” All in all, MediEvil is short but fun, and carries over all its charm, humor, and frustrations from the PS1 era.

MediEvil is, for better and worse, an original PlayStation game with a new coat of paint. It’s a fun romp through imaginative levels with classical gameplay styles, and charmed my pants off with its humor while I struggled with the platforming and fixed camera angles.

David is the kind of person to wear his heart on his sleeve. He can find positives in anything, like this is a person who loved Star Fox Zero to death. You’ll see him playing all kinds of games: AAAs, Indies, game jam games, games of all genres, and writing about them! Here. On this website. When not writing or playing games, you can find David making music, games, or enjoying a good book. David’s favorite games include NieR: Automata, Mother 3, and Gravity Rush.
Related Articles: MediEvil
Share
Tweet
Share
Submit