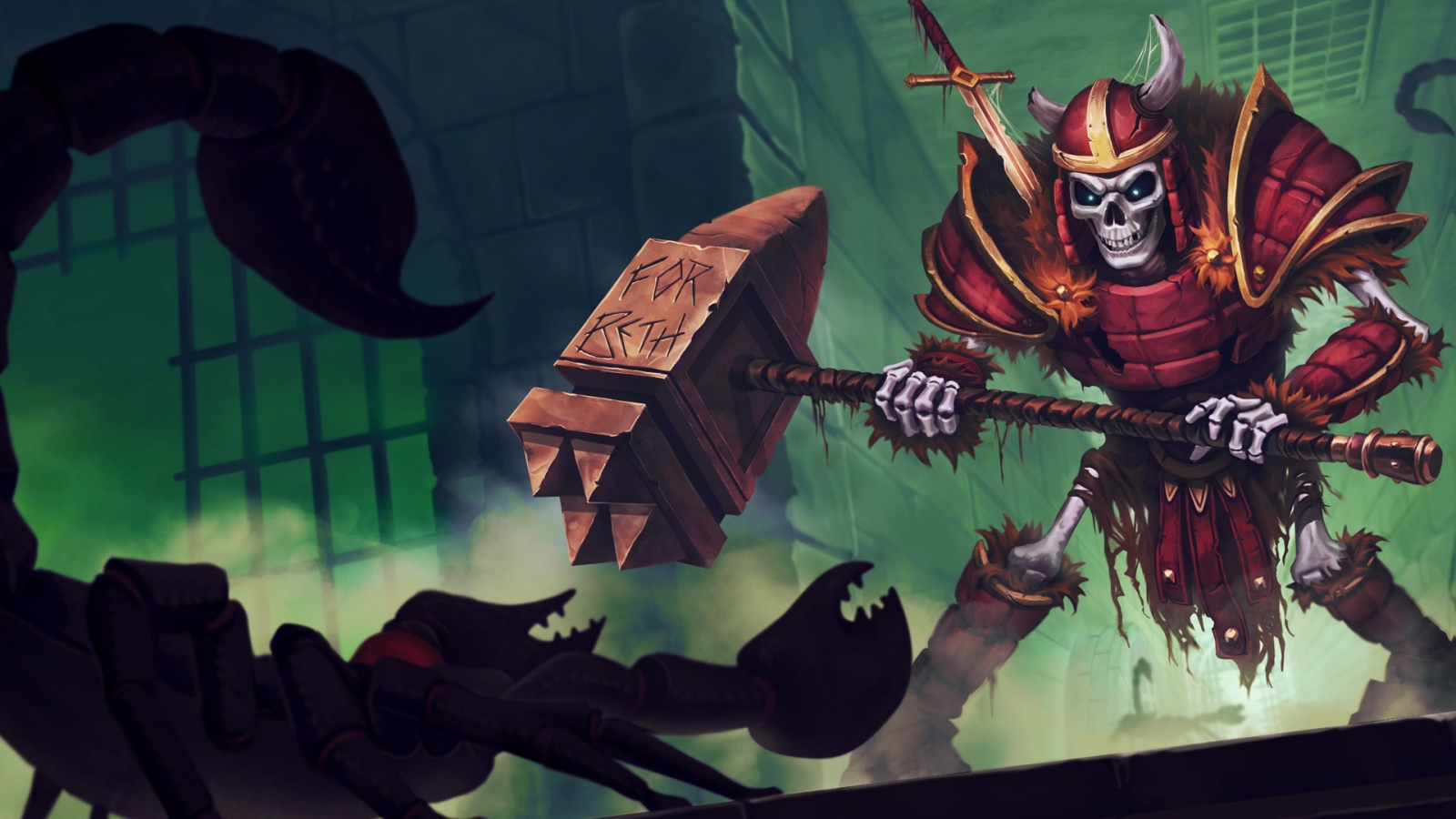 At first glance, Skeletal Avenger looks extremely similar to other rogue-likes. While its gameplay elements share many similarities with other games in the genre – Hades, specifically – the way it handles progression is actually quite unique, almost to the point where I would not necessarily call it a rogue-like, but rather a blend between a rogue-like and a straight up RPG. It’s also an incredibly fun title, and its gameplay is so strong that it almost manages to carry the other, weaker elements pretty much by itself.

In Skeletal Avenger, you play as – yep – a skeleton raised from the dead by a mysterious wizard. Your task is simple: gain power so you can hunt down the ones responsible for your death and exact revenge. After raising us from the grave, the wizard sends us out into the world to gather bloodstones – items that allow him to scout out our targets – and ultimately reveal the one who was responsible for our death.

We don’t know anything about our skeletal friend’s former life, but thankfully he’s more than capable of wielding a sword, daggers, hammer, and a number of other weapons to get the job done. Each weapon type has its own strengths and weaknesses that are dictated by their speed as well as primary and secondary attacks. Daggers, for example, don’t hit particularly hard but are wickedly fast, allowing for a rapid flurry of attacks in the same time it would take to make one blow with the huge, high-damage hammer. Perform a secondary attack with your daggers and you’ll release a fan of blades to strike foes around you, whereas the hammer’s secondary is medium-ranged frontal cone attack. While my personal favourite weapon was the daggers, all weapons are well-balanced and unique, and they’re all a blast to use. 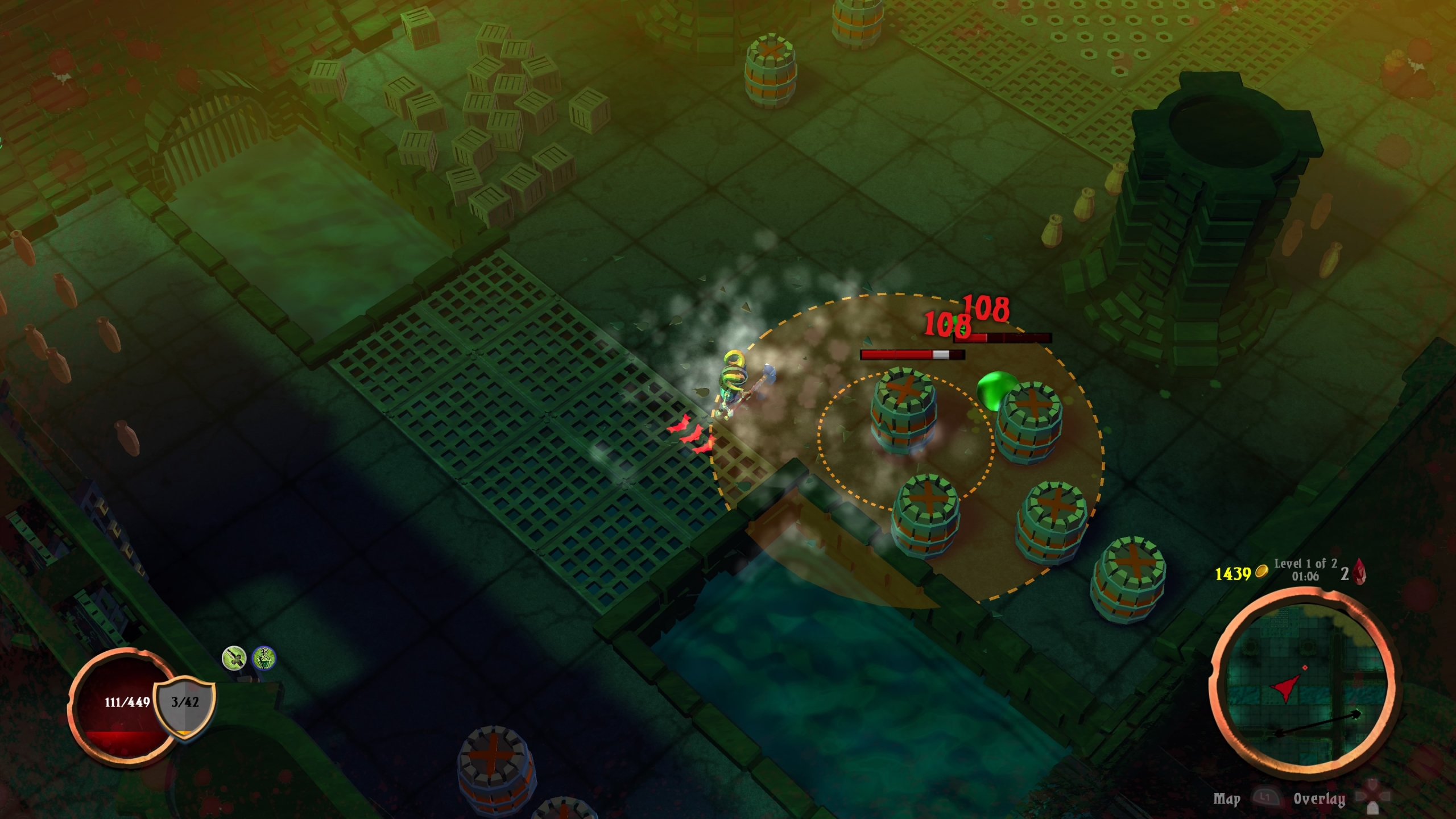 Conventional weapons aren’t the only tools our bony friend has in his arsenal. He’s also equipped with a short-ranged dash that holds three charges. Each charge replenishes after a few seconds, allowing for clutch dodges and traversal through environmental hazards. He’s also got a secret weapon in the form of his head; a projectile that can be thrown at enemies to deal a good chunk of damage. Each time you hurl your skull at an enemy, you need to pick it up before using it again, or it can be recalled after a lengthy cast time. I wouldn’t recommend doing this, however, as it takes far too long to recall and you cannot move or attack while recalling it. While there are ways to temporarily reduce the cast time (we’ll come to perks later), I do think the flow of combat as a whole would be improved if it was lower by default. Although retrievable projectiles certainly aren’t new in these types of games, the idea of pulling off your head and launching it at your foes is hilariously goofy, and definitely on theme. Due to this mechanic, helmets actually have a damage value rather than a defensive benefit, which makes finding new helmets more exciting to pick up.

Speaking of armour, there are four slots in addition to your weapon slots that allow for a helmet, body, boots, and trinket. While there are not a ton of different armour types, the same type of armour can have a different effect. For example, you might find two lots of leather armor and find one has a higher armour value, whereas the other increases a particular type of damage output. It’s a fair compromise; there’s still a decent variety of effects but the developers didn’t have to spend as much time creating armour assets, as we can actually see the armour on our skeleton once it’s been equipped. Trinkets are a slightly different beast; there are only eight of them in the game but they stay with you and can be freely swapped between runs (same for weapons and armour, but there’s a caveat there), but they offer significant gameplay advantages. My personal favourite was one that increased the effectiveness of healing pickups by 50%, but another top contender was one that, upon death, would bring you back to life with 35% health once per run. There were some offensive ones too, but I was good at getting hit so the defensive ones suited me better. There were also a couple of useless ones that could probably have been improved or cut for something else entirely. 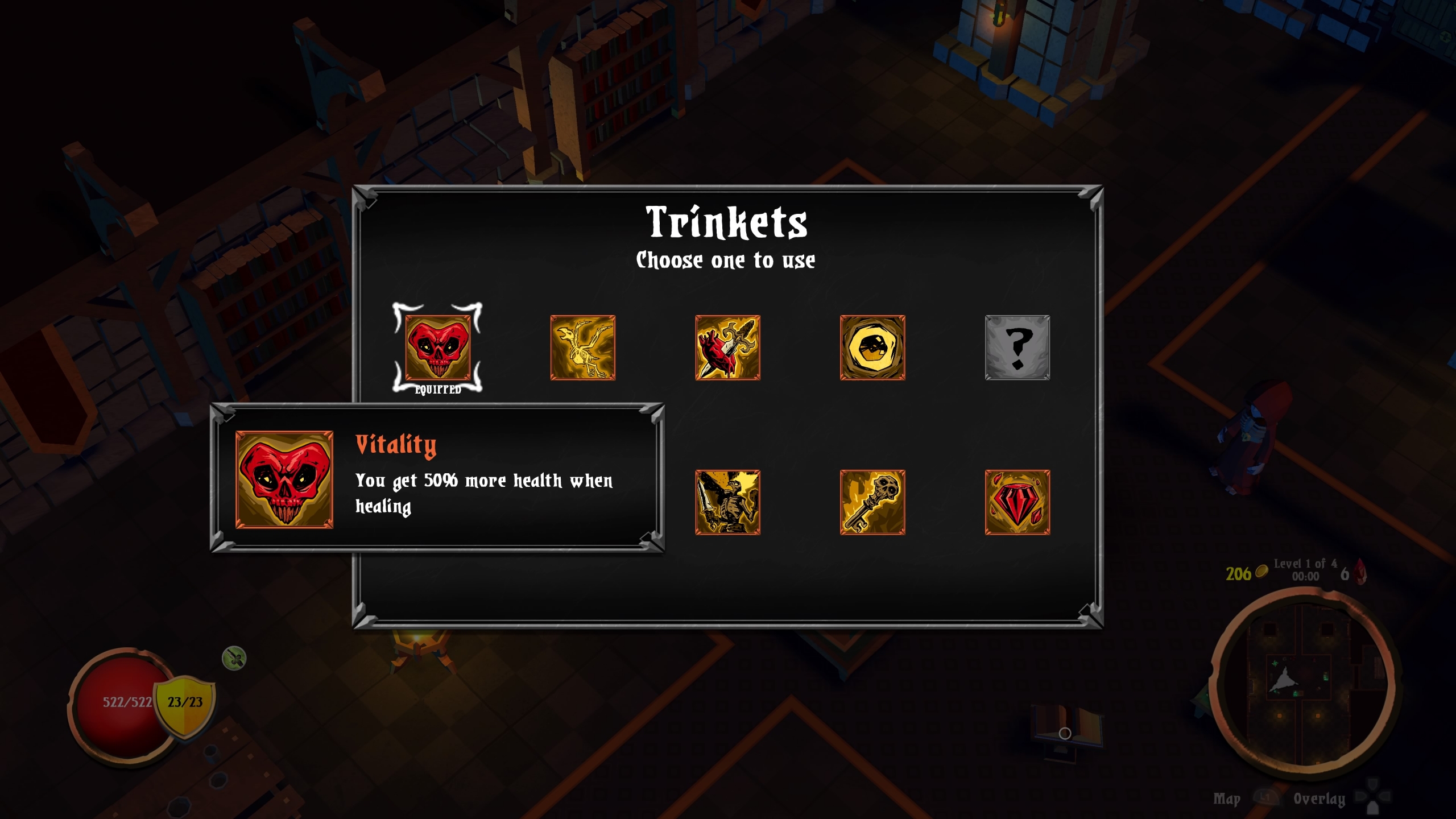 Tying all of this together, the combat in Skeletal Avenger is a blast. It’s fast paced, flexible, responsive, and challenging (but never unfairly so). Enemy design is also great; there’s a good variety of enemies that ramp up in difficulty the further in the game you get. Most enemy attacks are telegraphed, so you’ll be dodging large area-of-effect attacks, frontal cones, dashes, and more. There’s also projectile based enemies that you’ll want to take out first to make your life easier. Some enemy combinations can be frustrating, but there are enough tools in your belt to outplay your foes and thus combat never feels insurmountable. The weakest aspect of encounter design for me was the bosses. At the end of each run there is a mini-boss of sorts, but for the most part these are just stronger versions of enemies we’ve killed dozens of times before. There are 4 ‘major’ bosses that have one or two unique mechanics, but these were laughably easy; a shame because the regular fodder provides a good challenge.

On the gameplay side of things, then, Skeletal Avenger is – for the most part – a resounding success. The fact that you can team up with up to three friends in local co-op makes it even more exciting and chaotic. Other aspects of the game are a bit of a mixed bag, however, so let’s take a closer look at these.

Progressing through the game is fairly straightforward. There are four regions in the game, and to complete one you must collect enough bloodstones in that region for the wizard to reveal the boss. You can’t move into the next region before you’ve killed the boss of your current region. To collect bloodstones you must go on quests (or to use a genre-specific keyword, ‘runs’) that are accessed via a world-map in your base. There’s always a few quests open at one time, and each quest will reward a different number of bloodstones based on difficulty and length. To claim the bloodstones in a quest, you must fight through a set number of stages and defeat a miniboss at the end. Virtually everything you collect during each quest – whether that be weapons, armour, or gold – will be kept between quests, even when you die. Weapons and armour you find but don’t equip will be automatically placed in your Stash. Your Stash can be accessed from your base between runs, where you can either choose to equip collected gear or sell it for gold. Gold can be spent on permanent upgrades to your character’s damage and health, as well as some other useful utilities.

The only things that don’t carry through between runs are bloodstones and perks. Remember that bloodstones are the key items you need to progress through the game, and can only be exchanged for boss access once you’ve acquired enough of them. For example, the first boss requires 50 bloodstones, but if you die after only acquiring 45, you’ll lose half of them and have to recollect them. Luckily, I only ever died when I had a low number of bloodstones on me, but I could imagine this mechanic being extremely frustrating if you lost dozens of them in one run.

Perks do not persist after death either.. Perks are collected by exploring each stage, and with around 50 or so currently in the game, there’s a fairly good variety to make for some interesting builds. In addition to physical damage, there’s also aspect-based damage such as lightning and poison, and most of the perks build on this in some way. For example, one perk might have you leave a puddle of necrotic goo behind each time you dash, whereas another might imbue your primary attacks with fire. It’s fairly standard stuff, but there’s enough flexibility to carve out many different playstyles between quests. 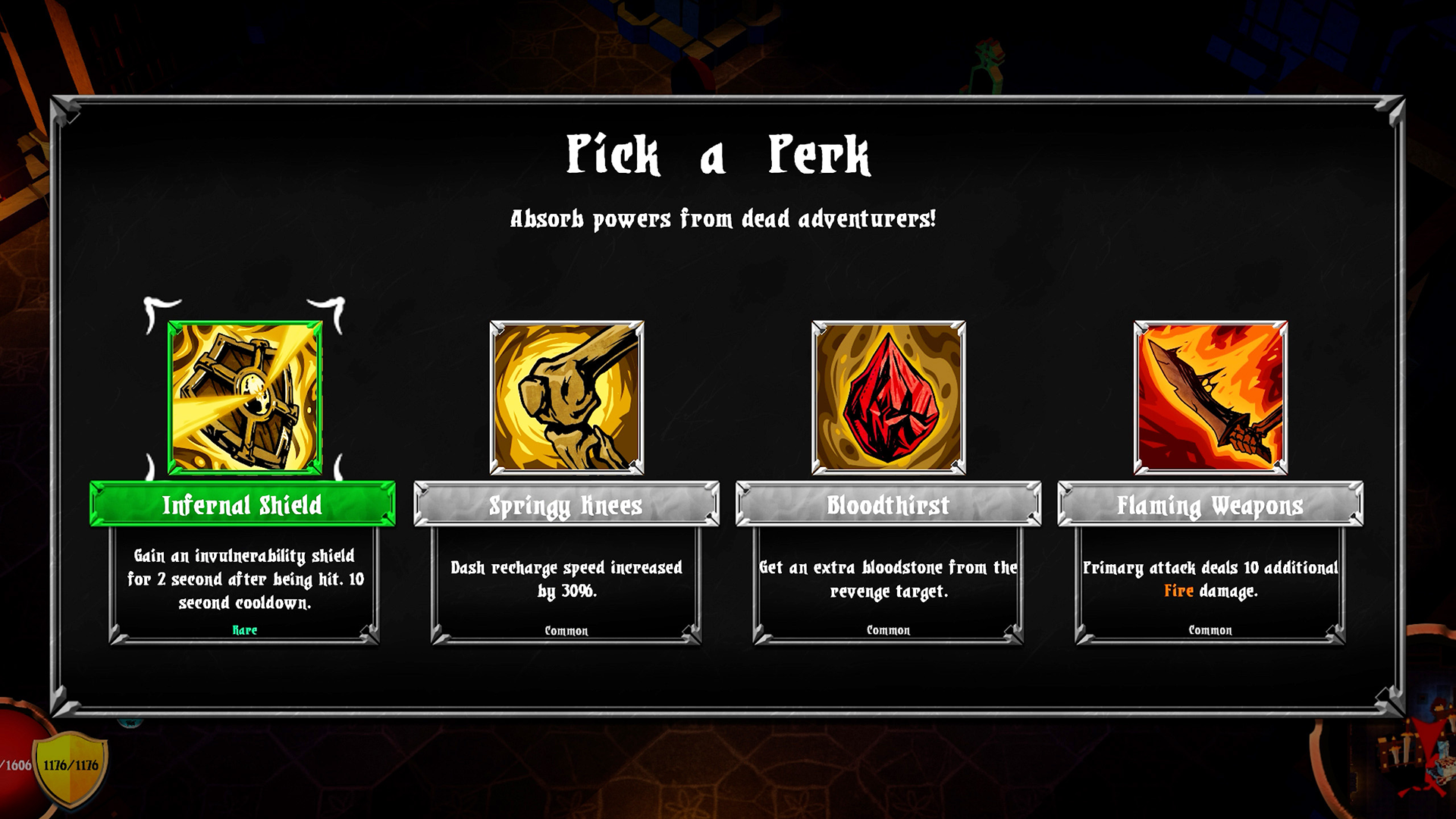 My major issue with perks is that runs generally don’t last long enough for you to create any truly powerful builds. Quests will last anywhere from 5-25 minutes, and even in longer quests there’s not always enough perk pickups to create any kind of truly powerful builds. It can happen if you get lucky in the early stages, but these instances are unfortunately few and far between. I understand there to be an ‘endless mode’ in the post-game that could alleviate this issue, but players should not need to wait until they’ve finished the core game to unlock the funnest builds.

Lastly I want to discuss the environments of Skeletal Avenger. There are four of them, and while they’re different enough in aesthetic, they’re not particularly detailed or interesting (the game is planned for mobile release after all). It’s the enemies that really bring these places to life, rather than the space itself. There are some themed environmental hazards, such as poison pools in the sewers and spike traps in the dungeons, but they don’t really feel all that different from each other when it comes to moving through them.

Overall, Skeletal Avenger is an incredibly fun game, but it is not without issues. I can overlook the lack of detail and flair in the environments, but the short runs unfortunately don’t allow for builds to truly take off. That being said, good progression and top-tier combat really do carry this game, even if it isn’t quite enough to elevate it to the heights of similar games in the genre.

Whether you want to call it a rogue-like or an RPG, Skeletal Avenger is held up by top-tier combat that is challenging but never feels unfair. Unfortunately, runs in the core game don’t last long enough for builds to really ‘take off’, and bland bosses and environments hold the game back from reaching the highs of similar games in the genre.

Kristian (or Kris for short) is a copywriter by day, button presser by night. Based in the UK, Kris loves any game that allows him to swing a sword, fire an arrow, or sling a ball of fire, but ultimately he's not too fussy. On the rare occasion Kris isn't writing or gaming, you'll probably find him in the bath with a good book.
Related Articles: Indies, Skeletal Avenger
Share
Tweet
Share
Submit