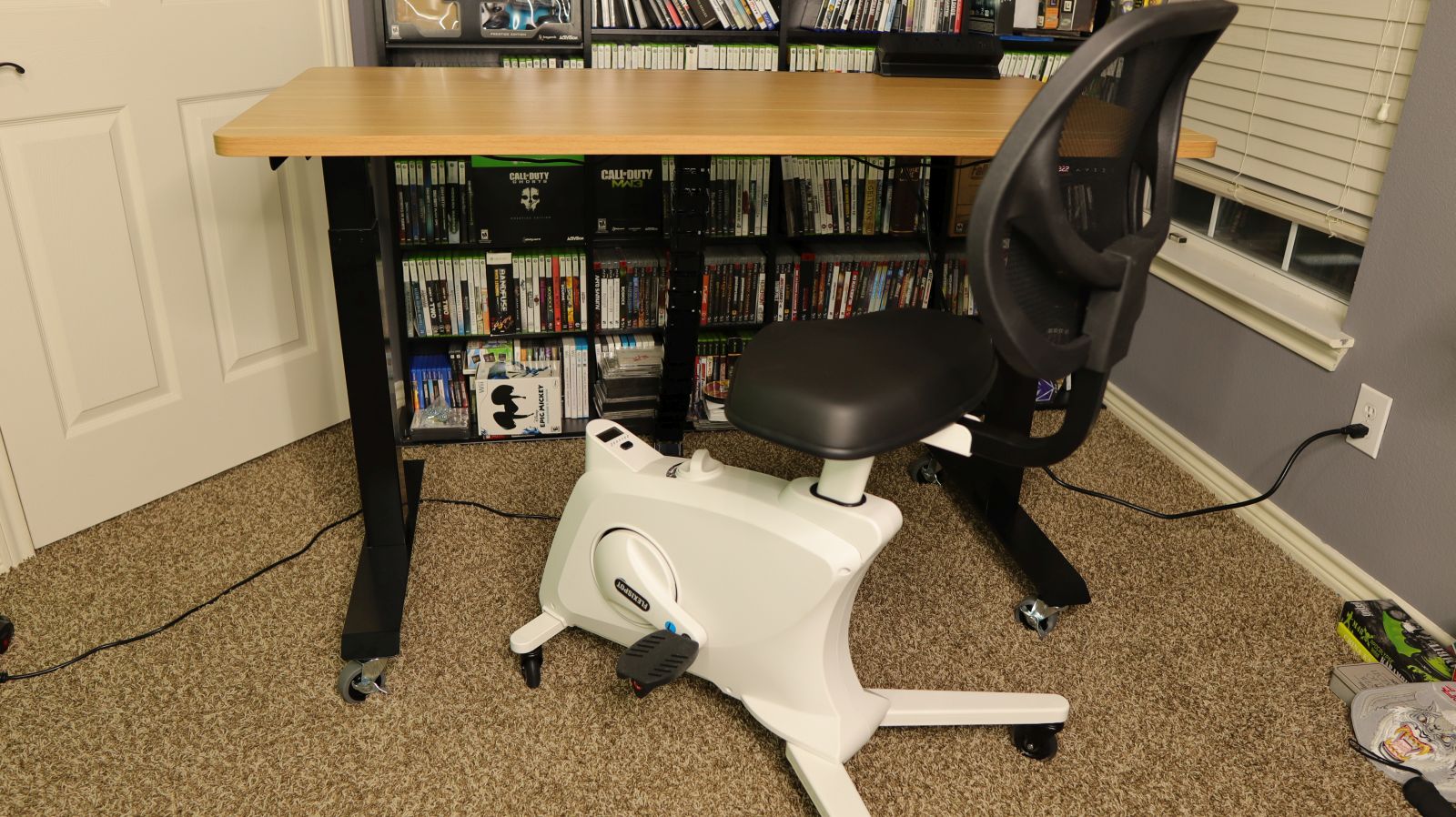 As we continue to work from home, more employers are starting to embrace remote work as the new normal. Finding ourselves needing to transform our workspace and trying to balance work, our health, and our free time, new tools are needed. Recently we took a look at a home solution for something many of us had at work — a standing desk. In that review, we cited the benefits of the Flexispot standing desk, including better posture, reduced pressure on our hips, and less stress on our backs. Recent studies have shown these benefits to be accurate, but there might be less truth to the supposition that you’ll burn a ton more calories simply by standing. As I began to look into better ways to improve my heart health and overall weight loss journey, I began to research both treadmill desks as well as under-desk bikes. In this review I aim to answer the question about calories burned sitting, standing, and finally pedaling on a Flexispot Sit2Go 2-in-1 Fitness Chair to see if there’s any truth to these claims.

First things first, let’s take a closer look at the Sit2Go 2-in-1 Fitness Chair. There are a lot of options when it comes to under desk pedal machines, and certainly cheaper ones, so what does the Sit2Go bring to the table?

Unboxing the chair, you can see that it’s almost entirely assembled from the factory. The pedals, seatback, and seat cushion are really the only parts you’ll need to bolt on — even the castors (which we will discuss later) are already attached to the bottom of the chair.

The pedals are keyed left and right, with a directional arrow indicating which way they thread on. An included wrench makes tightening them into place a snap. Similarly, attaching the seat cushion and seatback is accomplished with a handful of bolts and some washers to keep them in place. Assembly on the Sit2Go is about as simple as it can be.

I have medium pile carpeting in my recording studio. It helps with acoustic bounce, and it feels nice when barefoot. Well, unfortunately it also reveals a problem with the casters that most manufacturers employ on their gaming chairs, rolling desks, and anything else you can relocate — plastic and low profile casters. The dual plastic wheels have a rubberized feel on them, and they will likely work well on any solid surface like wood or concrete, but as you can see in the video above, one snapped almost the moment I put weight on it. I’m not tipping the scales by any stretch, but the central post folded over, nearly dumping me off the bike. Perhaps it’s a defect in the individual caster itself, but I’ve personally taken to automatically purchasing a more heavy duty steel caster with a solid single rubber wheel. These adorn all of my gaming chairs, and now this fitness chair as well — you can nab em for yourself right here. 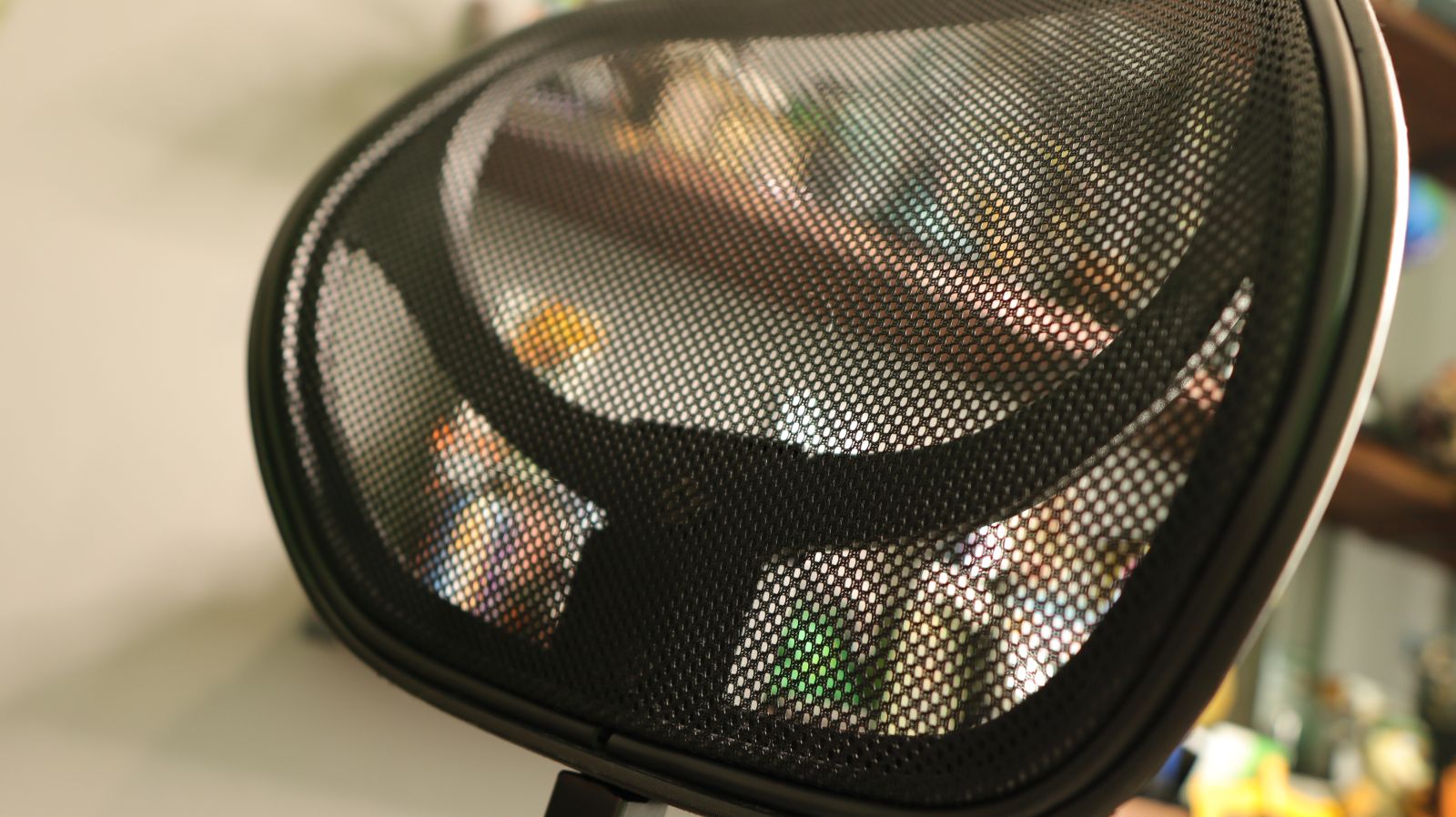 The backrest is thankfully a mesh style, allowing your body to breathe as you warm up. It’s firm enough to be stable, but not so solid that it’s in any way uncomfortable.

With the casters swapped and the parts all assembled, it was time to throw some batteries into the device and start pedaling. Putting on a MyZone MZ-1 chest strap heart and calorie burn monitor I use for my workouts, I aimed to test all three scenarios — sitting, standing, and pedaling. A small caveat — the MZ-1 doesn’t track calorie burn lower than 50% of my target heart rate, so I relied on the readings from the bike itself instead. 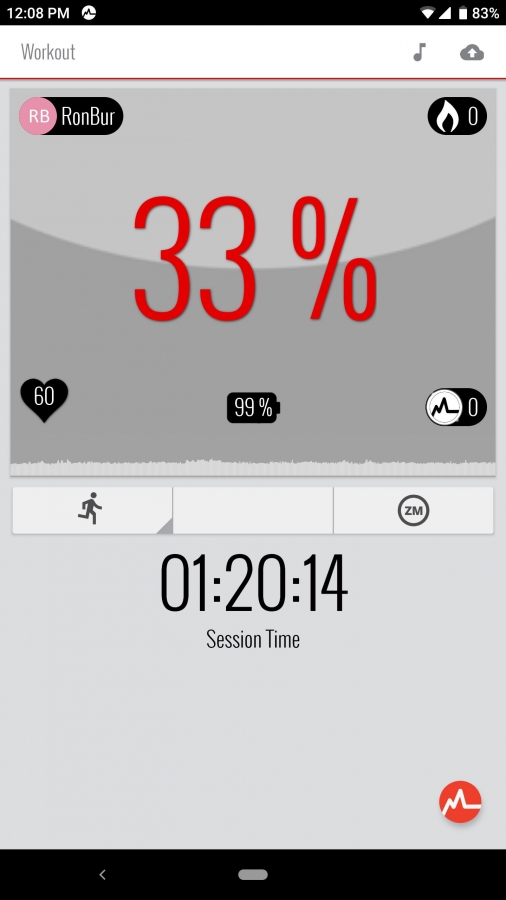 Sitting relies entirely on passively burning calories by simply existing in the space. I’m very happy to report my resting heart rate is just 60, putting me squarely in the “Excellent” range for a 21 year old — I’m 43, so suck it young people! Sitting at my desk burns about 60 calories an hour, according to most medical journals. For a frame of reference, a Light and Fit yogurt is roughly 80 calories. 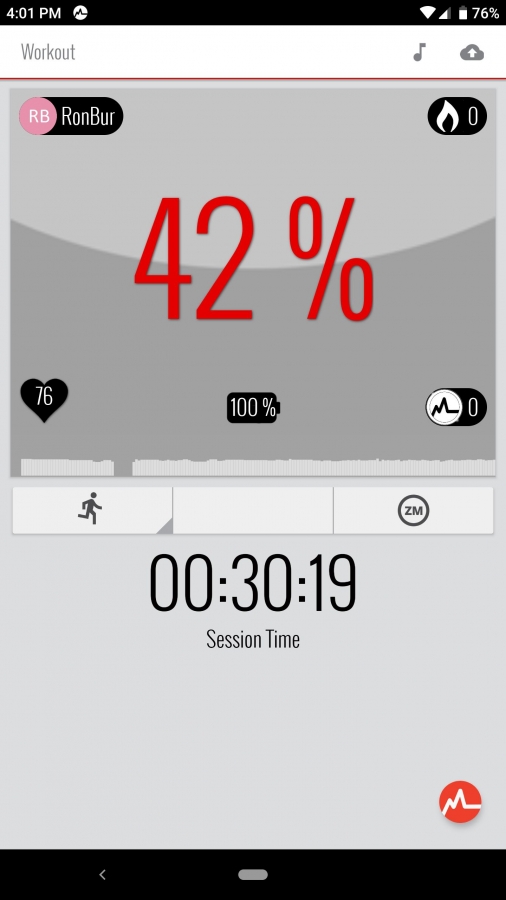 Getting my butt out of a seat presents a whole host of improvements. I no longer sit on my hip like I’m pretzel shaped, and it helps with my overall fatigue and lethargy during the day. I also see my heart rate increase up to between 76 and 80 beats per minute, with a small improvement to overall calorie burn — roughly 75 total calories per hour in total. 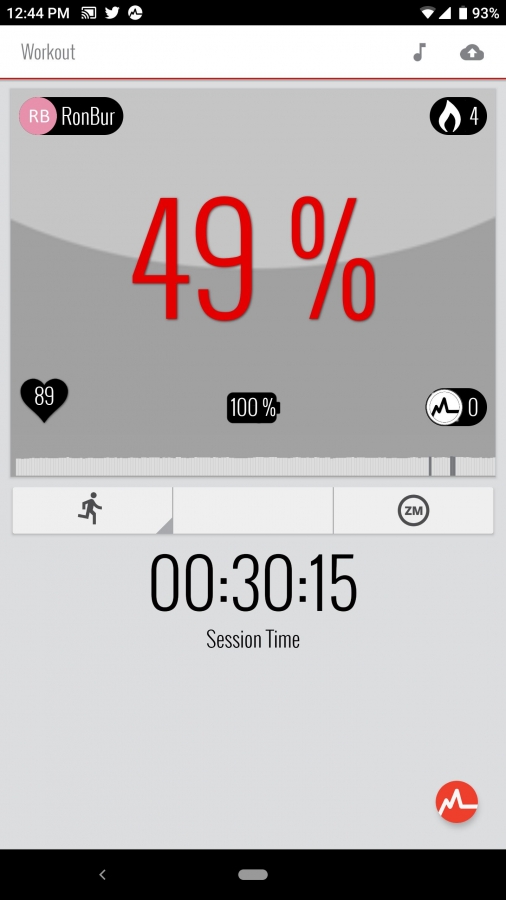 There are eight levels of resistance on the Sit2Go, and the first setting is almost zero resistance. It gets your feet pedaling and gets your heart rate climbing up just a little bit to roughly 80-85 bpm. Calories burned however climbs to around 135 bpm, yielding around that same number of calories burned — a 60 calorie improvement per hour. 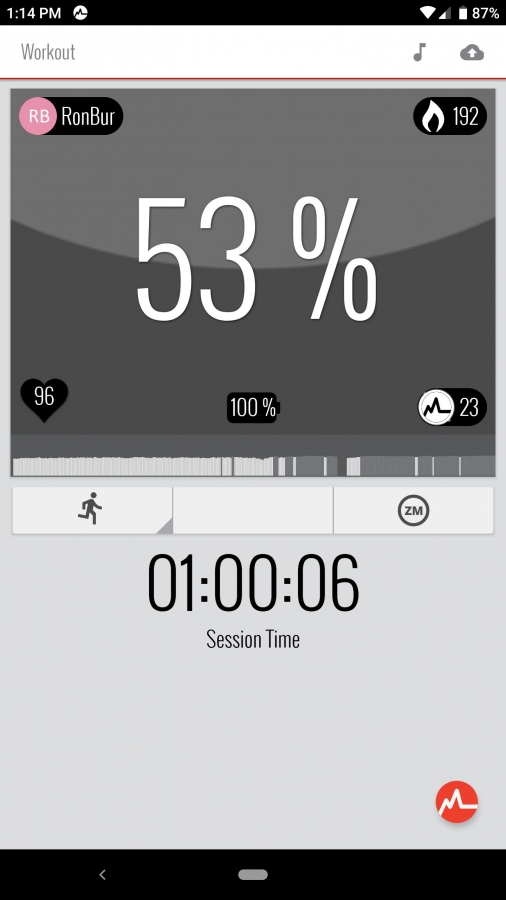 Bike level 3 will give you a good bit of resistance. It’s not impossible, but it’d be tough to sustain more than an hour without rest. It’s a good workout, and any more than this you’ll likely be huffing and puffing on your conference call. Finally driving my heart rate into the optimum workout range and hitting between 96 and 100bpm. At that rate I was able to burn roughly 380 calories in an hour (the video shows a different number as I chained level 1 and 3 together). That’s a huge improvement! For frame of reference, I would burn roughly 630 calories for a HIIT training session in the parking lot at 100 degrees of Texas weather fun. 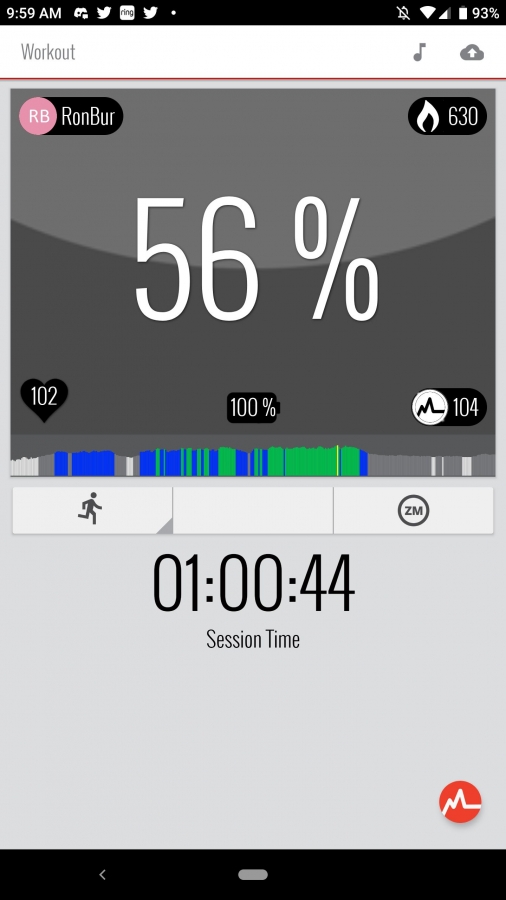 Here’s the thing…I don’t buy the numbers coming from the MZ-1, nor do I fully trust the numbers on the bike itself. Ultimately, it doesn’t really matter. Pushing your heart has proven and well-understood improvements to overall health, weight, and mental well being. There is clearly a difference, and a fairly large one. Even at lower levels it’s roughly double the calorie burn of standing. That being said, the numbers aren’t nearly as important as consistently doing the work and getting your body moving.

One of the things I liked the most about the Sit2Go is that it is nearly silent. I’ve never had anyone mention the sound, and the microphone on my laptop is good enough to detect even the smallest sound like lightly typing. It’s far more likely that somebody will hear you huffing and puffing long before they hear the whir of your pedals. 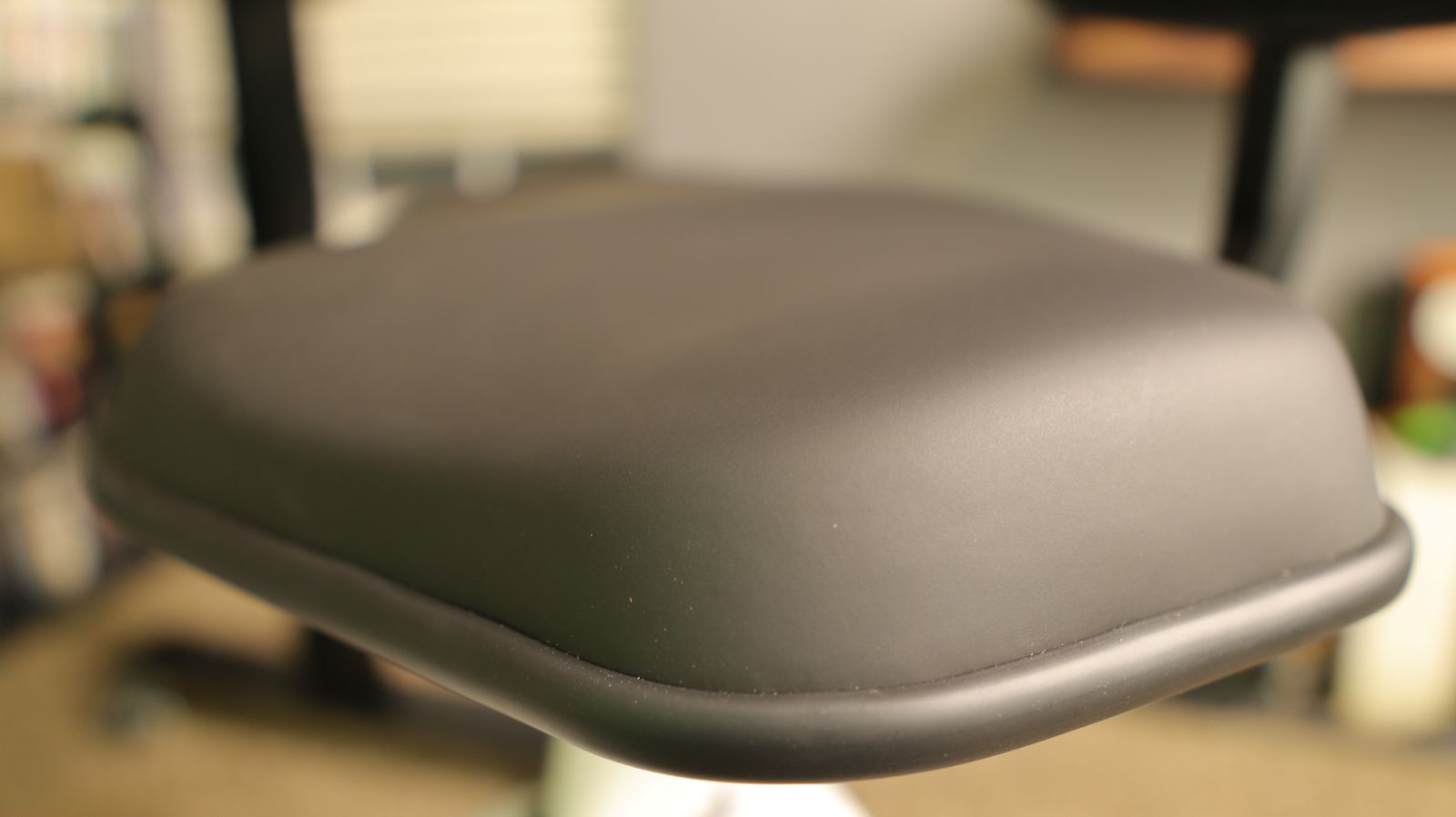 There are a handful of things that could be improved in the next version of this fitness chair. I found the seat uncomfortable for any extended period of time. The material is sturdy, wipes clean easily, and will likely last a very long time, but it’s simply not that comfortable. I ended up putting this cushion on the seat to help it stay comfortable on my tailbone over a longer session. That said, it’s a fairly standard bolt configuration, so it’s like you can find a different seat to your liking if you put in the effort. I also wish the seat was more adjustable. Yes, you can get underneath with an Allen wrench and slide the whole seat forward and backwards a little bit, but frankly that could have been a simple adjustment lever. 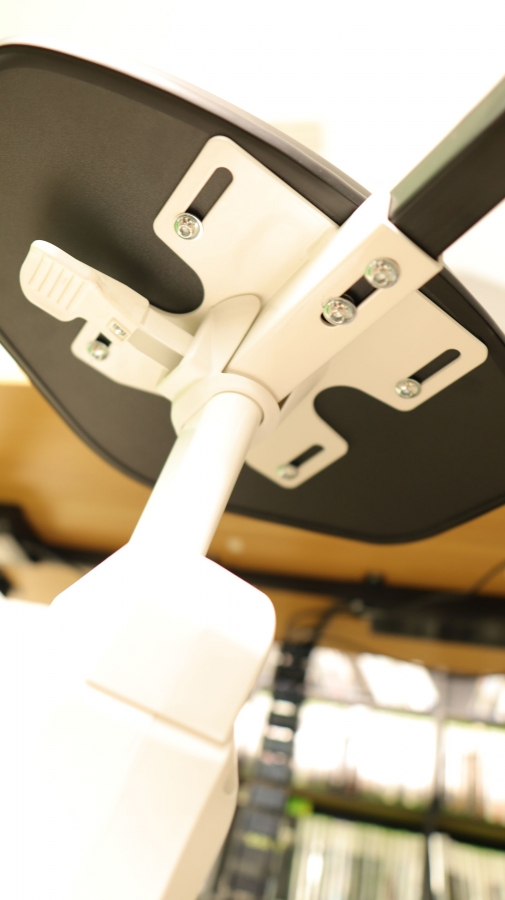 There is a single lever under the side of the seat that raises it significantly. This is helpful for people who are taller and might need some more distance for their legs to travel before bottoming out. The post angles back slightly, ensuring that the angle for your pedaling remains comfortable.

As it stands, the Sit2Go will set you back $279 at the time of writing (Amazon link). Given that there is an attachment to put a desk on it, you might find that’s worth the extra scratch if you don’t have a standing desk to put it under. Just like that desk, there’s a very good chance that a simple recommendation from your doctor would have some or all of the cost covered by your insurance.

I think we proved what we aimed to prove with our unscientific testing. We can definitively show that there is a marked difference between sitting, standing, and pedaling, with the latter delivering a fairly significant improvement. While it’s unlikely you’ll be pedaling on the Sit2Go Fitness Chair for 8 hours at a time, nor will the seat be comfortable enough to do so, but giving yourself a good 10-15 minutes every hour will keep you awake, alert, and if you eat well, thinner in no time.

Ron Burke is the Editor in Chief for Gaming Trend. Currently living in Fort Worth, Texas, Ron is an old-school gamer who enjoys CRPGs, action/adventure, platformers, music games, and has recently gotten into tabletop gaming. Ron is also a fourth degree black belt, with a Master's rank in Matsumura Seito Shōrin-ryū, Moo Duk Kwan Tang Soo Do, Universal Tang Soo Do Alliance, and International Tang Soo Do Federation. He also holds ranks in several other styles in his search to be a well-rounded fighter. Ron has been married to Gaming Trend Editor, Laura Burke, for 21 years. They have three dogs - Pazuzu (Irish Terrier), Atë, and Calliope (both Australian Kelpie/Pit Bull mixes).
Related Articles: Hardware, Sit2Go 2-in-1 Fitness Chair
Share
Tweet
Share
Submit