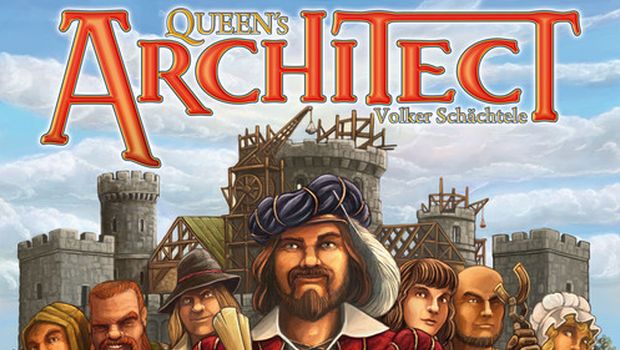 There are a lot of great family board games on the market today with simple yet engaging mechanisms and themes. What I honestly haven’t seen a lot of is a second stage family game, something a bit more advanced than your basic family games, where the mechanisms are straightforward and the appeal is broad enough, but clearly made for families who’ve played their share of Ticket to Ride and Carcassonne. What’s so pleasing about playing Queens Architect is knowing that very type of game is here in living color. A good amount of deep strategy and planning goes into Queen’s Architect, yet the game remains refreshingly good-natured and charming throughout.

Queen’s Architect pits players in a race to become the most favored architect (actually more like general contractor but let’s roll with it) in the realm. Players do this by traveling around the countryside, hiring and firing workers, building impressive structures and exchanging their bonds with the moneychanger. As soon as you’ve achieved enough fame to get you to the top of the track, you high-tail it back to the Queen’s castle in the center of the board for your final build.

Behold the domain of the architects

Players have a personal rondelle around which they will place their worker tiles and a personal tavern board where they give those same workers much-needed victuals from time to time. The common main board depicts a castle in the center surrounded by a handful of towns and villages of varying sizes. Players advance on a track of randomized numbers when they score points, mainly by building something in one of these towns. Each town has different demands for would-be builders, indicated by a small ribbon showing two to four worker types. Players move their little trolley to the town they’d like to build in, and as long as they have at least one of all the workers demanded by the town, they are able to construct a building. Players determine the building score by tallying up the inner numbers for all the workers around your rondelle (not just the ones demanded by the town). So if you score fifteen points, you can move above a five step and a six step, but if the next step is a seven, you’d have to stop because you only have four left over. But all is not lost – if you can’t make a step because you don’t have enough remaining points, you take that many bonds from the bank.

The hex-shaped workers come in six types. Each point of the hexagon shows a point value. Whatever point value is pointing inward on your personal rondelle board is the value of the worker for any build action you would take. Workers rotate clockwise after taking a build action. When the workers reach their sixth corner, then they are retired to the game box. This mechanism is the heart of the game and really feels thematic. I might be overlooking something from the vast miasma of games out there, but I can’t recall seeing a mechanism like this. How many turns you get out of a worker is directly related to how much you paid for the hire. Makes sense – people only work as long as they’re paid! The game gets a bit mathy as players try to puzzle out what next turns score might be, but it’s an enjoyable puzzle if you like that sort of thing. Turning the tiles is strangely satisfying as you expend of a collective effort of your workforce.

Six types of workers in the game

Your actions are directed by moving one to three spaces along a rondelle, taking one of the available actions, which are thankfully simple, straightforward and well-organized. The first action on the rondelle is a simple “get money” action, as you can have your workers act as day laborers and get paid a small pittance for their efforts. Some workers are better at this than others so you can spin them down to get extra cash.

Next action on the list is “hire a worker” where you spend money to place one of said workers in your employ. As workers move up in the offer they become more expensive. But since you always start the worker off on the point next to the hammer icon, as the workers move up in the offer, they also come with more overall uses before they head to retirement. I cannot tell you how much I adored this “get what you pay for” type mechanism.

The third action involves the money lender. You start off not very creditworthy – probably because no one has heard of you and you just arrived in a primary-colored wooden wagon. Players can go from one bond to four bonds per action. The ability to redeem four bonds for eight gold late in the game is very powerful. Using this very simple mechanism, the game draws the subtle distinction of cash wages vs. credit very well and creates some interesting pressures.

The fourth action is move your trolley. Not surprisingly, the game rewards good planning of your itinerary. Big moves are progressively more expensive such that inefficient and haphazard leaps around the board are punitively expensive and wasteful. But, if you have the funds, and you really need to go somewhere, any space on the board is reachable. Yet again smart mechanisms effortlessly handle optionality, reward planning and establish the station-to-station, travelling-circus-of-architecture context of the game.

Glassworker boozing, while mason, blacksmith and stonecarver sleep it off

Action five is the tavern, where you can go to reward your hard-charging workers with a well-deserved pint of beer and a long nap. You pay $1 to rewind one of your workers (indicated by the matching chit) one time, thus giving them an additional turn. I thought it was a fun and thematic touch that some workers values were fairly consistent from point to point, meaning feel free to give the fella a beer and a nap, but good luck seeing any increased performance from the ungrateful lout. Whereas other workers have bigger point swings per rotation, which means you can get a big boost of value for your money. After your workers get a beer, they have to go to the dormitory to sleep it off. Such a simple mechanism, but it’s simultaneously charming and supports game flow (you can’t rewind the same worker twice in a row – because they are asleep!).

At the top of the rondelle is the build action, where you employ your workers to either build or make repairs. Making repairs is another way to get points that is far less restrictive than building. You just spin down up to three workers of different colors and score the points printed on the scroll icon (anywhere from zero to three). I liked how the repairs mechanism put a premium on the workers with three-point scrolls, which added another layer of value to the workers on offer, and gave you another option if you didn’t have an in-demand worker type.

The artwork and overall look of the game is top notch, which is not a surprise coming from Queen Games. And I really must commend Queen on another A+ rulebook. Other game publishers should take a close look at the layouts and conventions Queen Games uses in the rulebooks because they are truly at the top of the industry in this regard. I was a bit disappointed in the all-too-typical all-white-dude cast of characters, with the notable exception of the seamstress who is of course a woman (cause bros can’t sew, I guess). As a white dude, I see myself in games everywhere I look and I wouldn’t mind seeing a bit more variety.

Queen’s Architect is a charming game perfect for families with a bit of experience in gaming. A bit more complex than your typical family-style game, yet laid back enough to be appealing to a wide audience. The game plays reliably in an hour and scales very well with all player counts. Turns happen quickly and the action is compelling and clear. Great artwork, excellent graphic design and a fantastic rule book makes this a clear recommend.