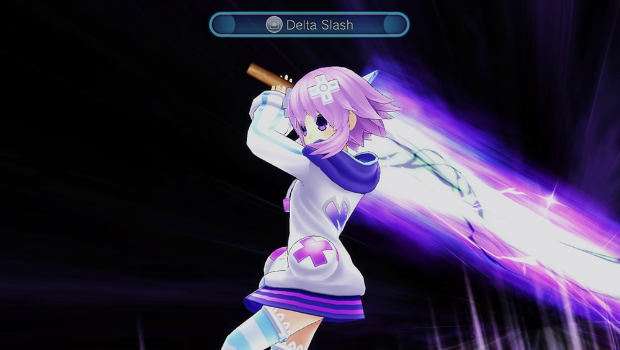 Neptune. Neptune never changes. Be it a tasty treat, a lunch time fancy, some gaming with her fellow CPUs, or beating the living hell out of some sort of browser pop-up demon in an alternate dimension, Neptune and her younger sister Nepgear retain that same bubble charm and naive spirit, scantily cladding their way from adventure to adventure.

Reliability is a nice way to spin monotony, so we’ll go ahead and say Megadimension Neptunia VII (pronounced Vee-Two) is a reliable RPG that draws heavily from past versions. The game feels almost like a sports title in that way, because this could be any other Neptunia title easily just with swapped characters and story. This drags the overall quality benchmark down for the game, but Neptunia VII is still a very fun game that does make improvements on the past in small ways.

The Neptunia series is known most for it’s quirky game-within-a-game concept, where all of the world names, items, events, storylines, and enemies are based on gaming cliches, concepts, and history. Many of the jokes and story events are inside jokes to the game industry itself, and the lighthearted nature and self-reflection is evident in almost all other aspects of the game.

Taking things one step further, Neptunia VII starts with Neptune, our main hero and the CPU for Planeptune, a bustling metropolitan center in the nation of Gameindustri. As a CPU, Neptune is a protector and celebrity at the center of her town, but the game starts with her just doing a bit of unwinding in a dank alleyway, where she comes across a gaming console that warps her and her sister to an alternate dimension. This triggers a second “title screen” for the game that is playing inside the gaming console they find, and starts the action.

Neptunia VII is structured with very little difference from previous games. Cutscenes are usually still images with sprites overlaid during dialogue. This is the dominant happening in this game, and this design for cutscenes is really bland and repetitive, and just plain lazy. Unless you’re really into reading dialogue, most of this can be skipped. If you don’t choose to skip, you’ll spend a lot of time in cutscenes, so have your reading glasses ready.

Outside of dialogue and cutscenes, you’re traveling and battling. Traveling is done in two main forms. Outside of dungeons the party moves from space to space very much like a game board.  A random battle can be triggered each time the party moves a “space.” Inside dungeons you are free to explore, but there are not a lot of available exploration options. Dungeons are largely linear, so it is easy to navigate. There are some added dynamic features in these dungeons, such as zones for climbing, and some areas that can only be reached once certain parameters are met.

Battles are also very similar to other titles in this franchise, but it works really nicely so there isn’t much tweaking needed. Characters are placed on a grid and can move freely in all directions, and they have an area of effect for special moves, as well as for the standard weapon attacks. Different weapons have different shapes and sizes for the area of effect, making upgrading weapons a little more interesting. Turn based and featuring a prominent combo system, battles move fluidly and take little time, meaning grinding and progressing is a simple but fun task. The game has a pretty nice design, with  easy to navigate menus and simple layouts. The graphics are cartoony but high quality, and the detail in the enemies and player models is of high quality within the constraints of a anime-esque format. The dungeons aren’t the best, with some bland copy and paste in some areas, and a ton of frustrating invisible walls.

The enemy design and concepts are among the best in gaming, with a total lack of rhyme or reason applied to what and how an enemy is created. Large robots, roaming plumbing pipes, flying paper planes with noodle men pilots, and squirrel-cat amalgams are a few of the enemies all roaming in the same forest zone, just a small example of the kind of madness and idiosyncrasy in the enemy creation, as well as the overall tone of the game.

Megadimension Neptunia VII is a story about a girl in a very strange world, but that world happens to be a apocalyptic bizarro dimension inside of a video game console. The game manages to be fun with only a limited amount of improvement. Continuing with its signature game within a game concept, Megadimension Neptunia VII is going to please fans and not do much to change the minds of detractors. Very similar to the past titles in the series, this game is tried and true because Neptune never changes.

Patrick Rost has been with Gaming Trend since 2013. At first focused on sports coverage, Patrick has gone on to cover a wide range of games and other products for the website. Outside of Gaming Trend, Patrick writes and records music, grinds perpetually in Elder Scrolls Online (PS4), and lives day to day with his two dogs, Bob and Stella.
Related Articles: Megadimension Neptunia VII
Share
Tweet
Share
Submit