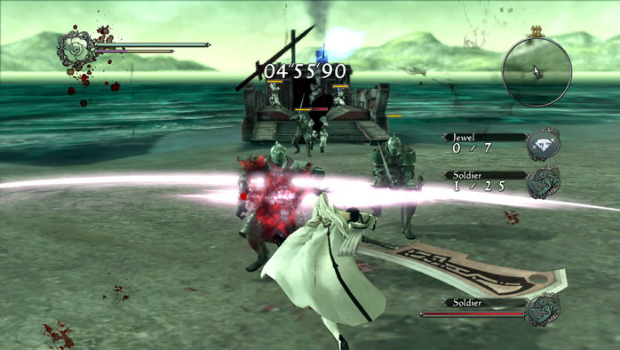 Unless you’re an only child, to which I say “hurrah”, you most likely understand the concept of sibling rivalry.  Sisters and brothers vying for attention, respect, space, and comfort in an ever shrinking space filled with raging hormones and total bummer parents inevitably leads to a few bruises and tears.  But murder?  Perhaps not in your family, or mine, but if you and your sisters are interstellar harmonic goddesses known as Intoners, things may be a little more tense at family reunions. Drakengard 3 tells the story of the goddesses known as the Intoners, and how they brought peace to the Earth in a time of great warring and turmoil.

In Square Enix’s latest hack-and-slash game Drakengard 3, players get a taste of what it’s like to be a psychotic murdering nightmare (with a perfect figure) named Zero as she hunts her powerful sisters one by one.  Unfortunately, the game suffers from monotony and repetition issues that take away from an otherwise interesting and unique gaming experience.

Each of the sisters is in control of a region of the world, with rather uninspired names like “the Land of Mountains.”  The black heroine Zero is the eldest and seemingly most powerful sister, accompanied by a mighty dragon named Michael.  Zero has a simple mission in mind: sororicide.  In the “tutorial” opening act, Zero confronts all five of her sisters at once in battle.  After a dirty turn of events, Zero’s arm is removed and her dragon Michael is mortally wounded.  The game proper begins with Zero reattaching her arm and an introduction to Mikhail, a prepubescent dragon reincarnated from Zero’s former companion.  Thus begins the trails of murder that lead to each of Zero’s marked sisters.

The gameplay of Drakengard 3 is a mixed bag of very nice moments and very lame ones.  Zero attacks with two standard actions, one a basic attack and a “power attack” that does extra damage at the cost of stamina.  Both can be done in combination as well with the jump button.  The combos work fluidly and add a little spice to the action, but it tends to drag along from fight sequence to fight sequence, with little variance in enemies and their tactics.  The map layouts are very linear with little-to-no deviating paths.  Boss battles also suffer from predictability, as most attacks are easily dodged and the obvious tactic of attacking from behind works 99% of the time.  Though Zero gains gold and experience after each battle, it appears to have little noticeable effect on the gameplay.

You’re given a choice of four weapons, and each weapon has different advantages with range, power, and the like.  Many of the large battles require smart switching of weapons to maximize your effectiveness, but there is little consequence for not making the correct choices.  During the larger battles, a circle will appear that calls your dragon to aid you.  You only need activate it once, and it only takes a second or two.  The dragon will soon arrive and start completely wiping out the enemy forces.  While it is neat to have the option, it often further simplifies a battle already is very easy to win on your own.

There are certain sequences that sees Zero and Mikhail attack from the air, with you controlling Mikhail’s attacks and flight.  This form of battling is the most difficult and rewarding, and is reminiscent of boss battles from the 64-bit era with modern flair.  The dragon Mikhail can attack with fireballs and can perform a devastating slam attack that takes stamina.  The player must keep mind of his dragon’s elevation and use the X button to stay aloft by flapping his wings.

While all of that negative would seem to suggest that Drakengard 3 is a bad game, the truth is that the bare skeleton of a great game can be seen in moments within the action.  Many of the combos result in very satisfying attacks, both visually and effectively.  A special “Intoner Mode” that you earn through kills briefly boosts your speed and power, and the spectacle and usefulness of this mode cannot be denied.  Drakengard 3 is far from broken or unplayable, and actually can boast some very impressive recognition of space, distance, and physics in relation to the action coming from the player.  All of that can be easily lost, however, in the litany of aforementioned gameplay issues.

The game’s AI is a mess, with your companions often marching into invisible barriers and becoming stuck.  The enemy forces fare no better, where they simply follow the predetermined path, even if they end up walking right past you in the process.  They will turn around and come back to fight, but it’s silly to see a troop of soldiers marching past you every few minutes like you don’t exist.  The soldier design is straight out of the “Enemy soldiers in a Video Game” handbook, and the level design is also bland and slopped together.  Drakengard 3 has gone through great pains to make their animations and on-screen information look beautiful, but foolishly banked on the gaming public to embrace 30 different shades of gray as the color palette for the world you’re playing in.

The game’s levels are divided up into chapters and “verses.”  Zero can also take part in item gathering missions for a mail-order shop.  These missions take place in sections of previous maps and while they don’t bring any variance to the game, they do serve as quick warm-ups for battle and “farming” levels for gold and experience.  Weapons and items can be bought in the pre-battle menus, and weapons can be upgraded with gold and “base materials” that you earn in the battles themselves.  Weapon upgrading changes the stats and visual aspects of the weapons used, and is one of the best features of  the game.  Zero can also be accompanied by disciple-like companions that do relatively nothing to help.

While the world’s design is pretty lackluster while in game, the cutscenes are marvelous in terms of animation, and done in a fast-paced action movie style that fits the tone of the game fantastically.  The accompanying music, composed by Keiichi Okabe, is absolutely beautiful.  The music goes with the action perfectly, and is very diverse and imaginative.

Drakengard 3 is a disastrous mix of high potential and very low execution. The game suffers from monotonous action and flavorless textures throughout each and every level. While the gameplay is fun at times, it will never be a long-term interest for most gamers. The cutscenes and music are both marvelous, however. It’s a shame that such a interesting story idea and so many fun gameplay functions, like the Intoner Mode, are lost in a lackluster game. The conjoining of the monotonous fighting with the linear maps creates a very predictable experience that just gets old very quickly. Drakengard 3 does have value for those who can look past its flaws. A great game for PlayStation 3 clingers-on and those who appreciate any old fashioned scantily-clad female lead death gauntlets.