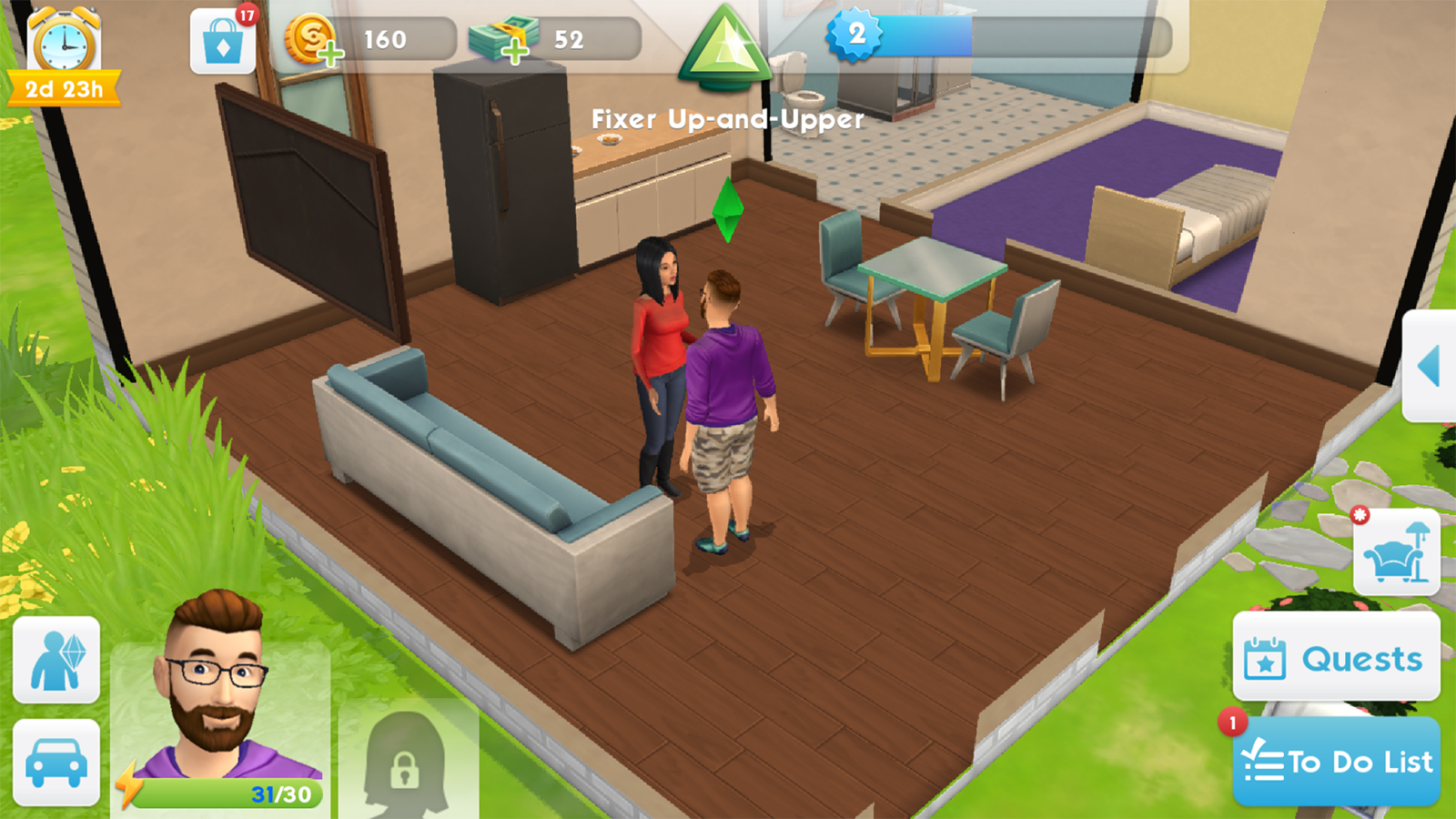 The Sims franchise has always held a special place in my heart, and I try to review every game and DLC I can. So when EA announced The Sims Mobile game for iOS and Android, I was both excited and very skeptical. The idea of taking the Sims with me was a dream I have had since phone games started evolving, but with freemium games becoming the norm I did not have the highest expectations for The Sims Mobile, luckily I was wrong.

The Sims Mobile starts off with the Create-A-Sim mode for your first Sim. I had no idea they could create such a robust character creator on a phone. I was able to create and fine tune my Sim to my liking. Although the selection amount was nowhere near the options as The Sims 4, the mobile creator was beyond anything I have seen on a phone or tablet and really set the bar for what was to come. Many accessories, clothes, and makeup options are locked in the beginning, but the entirety of face and body options using presets are available. You may not have the pieces to create the perfect Sim, but you can build the foundation for unlocking things as you play. The only thing I would say I was disappointed in was that it was hard to make an older or more mature looking Sim, as any Sim I made ended up looking pretty young.

After a short tutorial on how to play and what to do, I was able to really start enjoying the game. There are to-do lists everyday in real-time to give you things to do for rewards and quests to work on. For the most part both the quests and to-do lists work together or off of each other so you always feel like you are making progress. I quickly found myself doing my to-do list when I woke up each morning and slowly working on quests throughout the day. That is where The Sims Mobile really shines, as you can play as little or as much as you want and still progress.

There are many things to do in The Sims mobile and the beautiful thing is you can be as hands-on or hands-off as you want. There are jobs to make money (and new ones unlock as you play), parties, hobbies, and social events. Doing all of these have important rewards which make them feel like they are worth putting in the effort. The more you do your job, the more money you can make. Friendships and relationships happen through social events, and hobbies allow you to level up things like cooking and playing guitar. As you do these things, you can click different interactions and objects to quickly finish the event, or you can just let your Sim do it on their own in a set amount of time. One complaint is how long it takes your Sim to do anything on their own compared to helping them. I was able to complete most events within a couple minutes, but if i just told them to do it and turned off the app it might take one to multiple hours for them to finish. Although I feel like there should be a little less time when they do it on their own, I also found that I appreciated this system. It allowed me to do any events in the game and shut the app off to do things in the real world while still making progress. I found myself logging in when I had a chance, playing for a bit and than sending my Sim to work to make money while I turned off the app and did something else.

The game stays true to the formula of The Sims franchise while making some smart decisions that work well on the phone format. The Sims Mobile is a much more linear feeling game and less of a sandbox than the full games. You level up to unlock new events, clothes, jobs, and many other aspects of the game. Some of these include unlocking marriage, being able to have kids, and unlocking items for both your work and home. Having to do things and finish quests to be able to continue progressing felt a little weird at first, but after a few sessions I couldn’t imagine it working any other way. I felt a greater sense of accomplishment than I did in The Sims 4 base game because I was able to slowly work on things and when I completed them there was always something new to unlock or do. I never really felt like I had nowhere to go and i was able to tell my Sims what to do whether I had time to actually play or not. Everyday whether I played hours or just a few minutes here and there I always felt i was making progress and unlocking new things. Although I would never want a full-fledged Sims game to be like this, it works perfectly on the iOS and Android format.

There is also a self-guided story to the game which I am enjoying. You start with a basic home and from there you choose how to build it. You can build new rooms, change and upgrade the furniture, and even throw parties. The house is a perfect way to show how you’ve built it up and it is a status symbol. As you grow your house, you can throw parties that other real people can come to. As you play, you also can unlock more Sims to add to your household, have a baby, grow in your career and make new friends. It really shines and allows you to choose what to focus on while still progressing you on set paths. I focused my first few days on just having my Sims work all the time to start making money as fast as possible and then started having more fun unlocking and playing events after I had some savings. Whenever I put my phone down for a while, I would send them to work so they were making money as I was doing things in real life. Although the game is more linear, I was still able to pick and choose what I wanted to focus on while still making progress. After playing as your Sims you also have the ability to “retire” them which gives an heirloom to pass down to a new Sim. These heirlooms gives boosts to your next Sim.

My major concern with The Sims Mobile was the free part, and what usually comes with that model on mobile devices. Although I knew coming into the game there would be ads and the option to use real money, I wanted to play the game without spending a dime to see how well it held up, and I have to say I am pleasantly surprised. There are ads that will give you bonuses like more money or tickets for building your house, but you can choose not to see the ad at all and just miss the bonus. At first I skipped them, but then I realized the bonuses were no bad for a 30 second or so ad. Regarding spending real money, I personally never saw the point unless I wanted to unlock stuff right away. Through playing, you can earn real money in the game, although very slowly, so if you don’t mind a bit of a grind you don’t need to pay real money to progress. I was able to play just doing my career and social events and never had the need to put down real money just to speed something up or unlock a piece of clothes. The Sims Mobile really makes the game feel fulfilling whether you want to spend money or not, which is something special in today’s freemium game market.

The Sims Mobile also works very well from a technical aspect. The game runs smoothly and I did not have any framerate issues and slowdowns. The loading screens are fast and overall it runs smooth. My colleague, Kay Purcell, did run into a couple issues on her Android device however. She had her screen break out in error stripes and it made a shrieking noise that required a hard reset to fix. With that said, it only happened a couple times and has been working fine other than that. I have been playing on iOS and have not had any problems other than the fact that prolonged play will kill your battery faster than a lot of other games.

The Sims Mobile is an addictive and fun game that you can play as much or as little as you want while still making money and progress. Whether I had half an hour or a couple minutes, I was always able to send my Sim to do something productive, which allowed me to make great progress throughout the day. The game runs fantastic and I have very few complaints about this great entry in The Sims franchise.

Growing up in a small Colorado town, Bryan has always had plenty of time to play games. PC is his first choice of tech followed by the PS4. Graduating at 16 Bryan knew he wanted to be a writer and wanted to combine his love of games into that and found Gaming Trend in 2012 where he quickly became a member and started writing for them as soon as he could. He is still at Gaming Trend, but now has 2 kids, a puppy, and a lot less time to play the games he loves, but he always finds a way to get back into gaming.
Related Articles: The Sims Mobile
Share
Tweet
Share
Submit