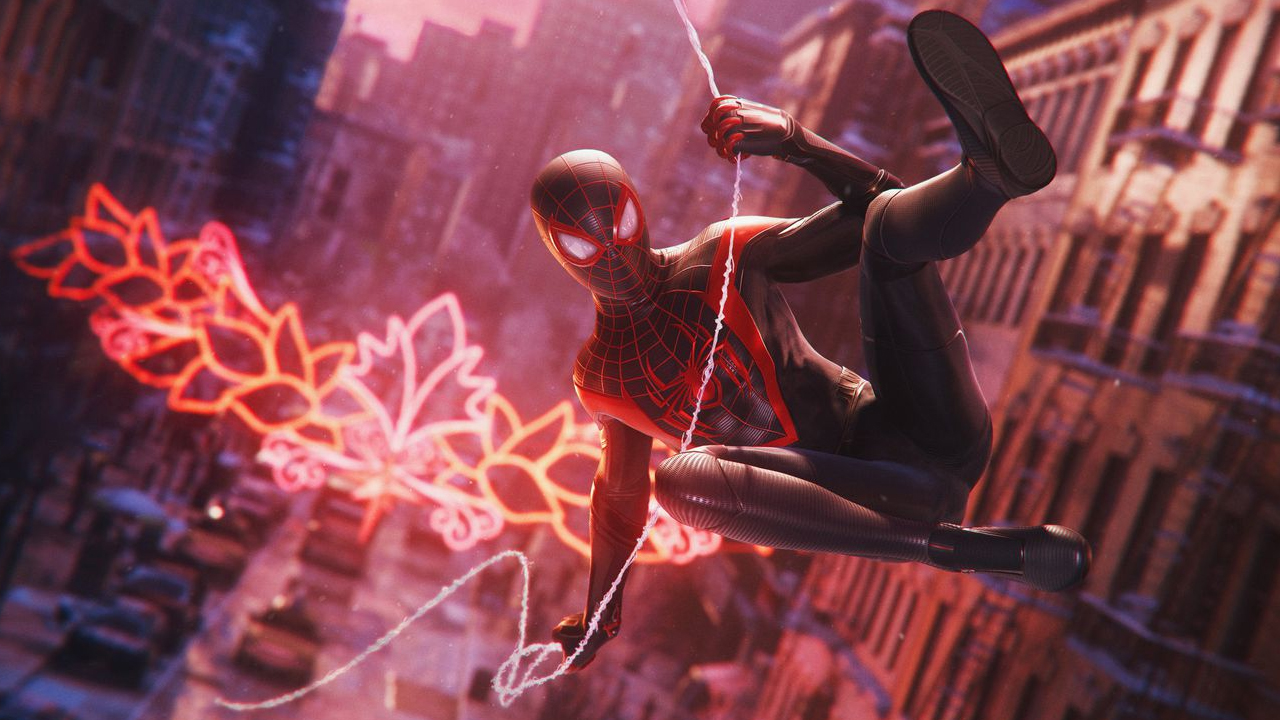 How does Peter Parker go on vacation? Well, when he was on his own he couldn’t, but that was before he met Miles Morales. Miles, also bitten by a radioactive spider (how many of these things are running around New York?!), is now Peter’s prodigy, giving the original webhead a bit of breathing room. Left to his own devices, can Miles step up and wear the mantle? Does New York need another Spider-Man?

Well, in point of fact, Miles Morals isn’t Spider-Man, or at the very least he’s not Peter Parker. This story is about Miles and his discovery of just who he is, what his powers can do, and the consequences of a life in service of others as an aspiring hero in his own right. In the end, it’s not about being Spider-Man — it’s about being your whole authentic self.

I don’t want to give away the story. In fact, I’m going to touch on it briefly, lightly, and only this once. The central thrust of the story is about a revolutionary new fuel source with the power to light up all of Manhattan. When has that ever gone well in the Marvel Universe? While that could easily be paint-by-numbers simple, the storyline is actually pretty nuanced and feels like it should be a part of a major motion picture — it’s that well-written. The rest you’ll have to discover for yourself, so get to it, ya menace. 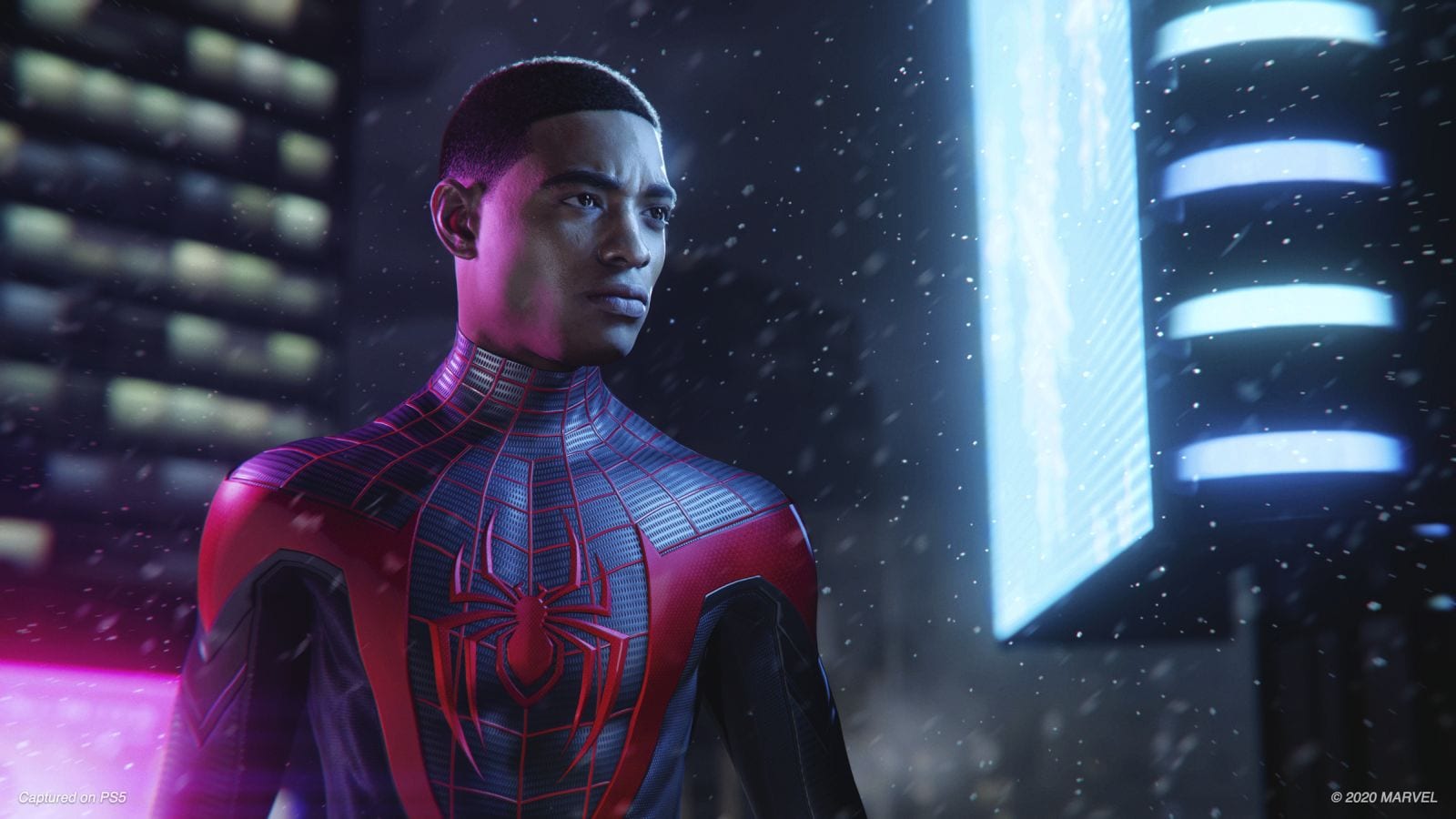 I want to address the elephant in the room — while this game is available on the PlayStation 4, you absolutely need to see this on the PlayStation 5. Marvel’s Spider-Man was absolutely gorgeous on that platform, as you can see in our review from 2018, but this game is on a whole different level. Lighting, reflections, and overall fidelity of every single aspect of this game screams next-generation, and it does it while maintaining an absolutely rock solid framerate. Marvel’s Spider-Man: Miles Morales is the game you use to showcase your new PlayStation 5.

As has been the case for recent first party titles, Marvel’s Spider-Man: Miles Morales sports two options for visuals — a Fidelity mode, and a Performance mode. Fidelity turns on every bell and whistle available, activating the realtime lighting, reflections, and far more subtle effects. During one scene Miles celebrates Christmas with his family and friends, and it’s hard to overstate just how phenomenal this scene really is. High dynamic range lighting bathes everything in color-corrected natural light. The neon glow from a sign outside reflects off of the glasses on the table, bending and distorting in a phenomenal way we’ve not seen in games to date. Subtle shadows that flow through hair, subsurface scattering of light through the skin on their ears, and even the reflection inside a dish being cleaned in the sink bring the entire scene to life in a way that sucks you into the world Insomniac has created.

It’s not just inside of buildings that all of this amazing work happens. If you use the photo mode you can zoom in and see the reflection of the nearby window on Miles’ costume, but you can also see the slight light bleed from the purple light in the window across the street. Seeing the distorted and rounded reflection of other things in the room coming off of people’s glasses is just barely scratching the surface of the level of detail in this game. Over the last few weeks I’ve seen a LOT of realtime lighting-powered games, but Marvel’s Spider-Man: Miles Morales is the cream of the crop. This game is a system seller, and you’ll want to experience it on the PlayStation 5.

If the PlayStation 5 has a superpower, it’s these amazing DualSense controllers. Vibration in controllers is one thing, but what’s going on here is a whole different level. You’ll feel individual keys tapping as Miles types away on a keyboard, small nudges when a door or window closes, the clink of a glass. You can even feel the small ridges on a curtain rod as the curtains are closed. Combat is visceral with the impact of punches landing heavily, and the thwip of webbing as you plaster somebody to a wall. Far more than just a buzz that numbs your hands, this feels like real interaction with the world, and I can’t overstate how much immersion it really brings.

As a fledgling superhero, Miles needs a bit of training to get up to speed. Thankfully, Peter is a dutiful mentor, leaving augmented reality training modules for Miles to learn new skills. Combat, Traversal, and Stealth challenges let you try out your new powers under the pressure of a timer, with three levels of success possible . These skills are useful, but they are the extent of what Peter can give him. While Miles may have been bitten by a radioactive spider, his powers are altogether different than that of his mentor. 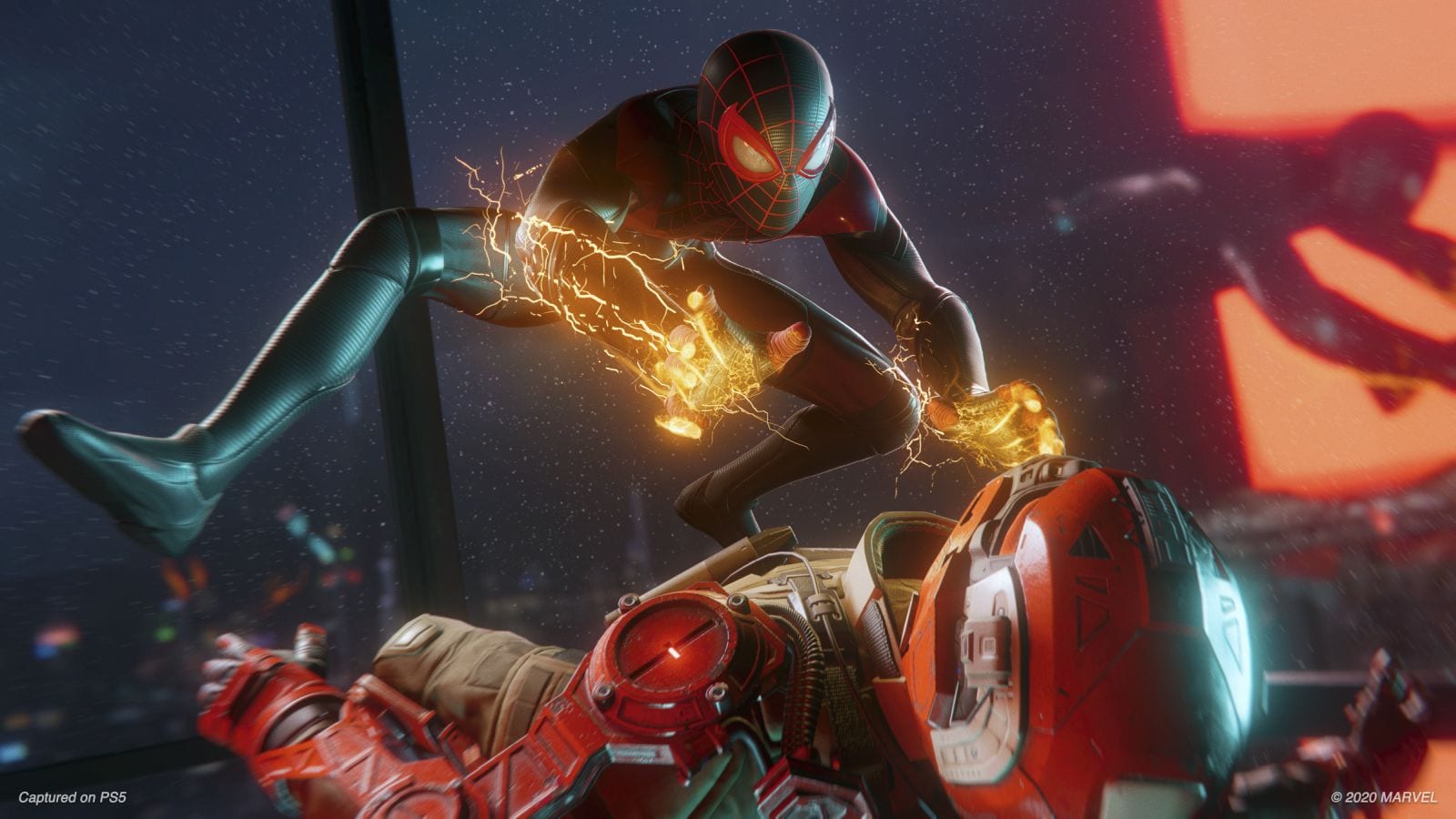 I don’t want to ruin the surprise regarding gameplay mechanics; Miles may be able to stick to walls, but his powers are a little bit different than the ones Peter Parker has in his arsenal. These introduce some entirely new stealth gameplay, as well as a way to take down even the toughest of foes. These are used throughout the game as a way to navigate and solve puzzles, and it makes the whole thing feel fresh. Miles is his own hero, so it’s only right that he’s not just Peter Parker in a different suit.

It’s not just powers that makes Miles feel different, but how he moves in general. He has a certain amateurish movement in the beginning as he grows into his powers, and it’s only after you’ve gotten used to the way he moves that he starts to look like he truly is a proper webslinger. I don’t know how much time and effort Insomniac spent on the animations in this game, but it was time well spent. Since Sony saw fit to reveal it themselves, there’s also a cool added surprise for fans of Into the Spider-Verse. In that movie, Miles is animated at twelve frames per second, making him look somewhat jittery. As the movie progresses and Miles grows into his powers, he is then animated at 24 frames per second. When you’ve unlocked it, you’ll get that same low framerate animation style, accompanied by “pow!” and “thwip!” type call-outs. It’s an awesome nod to a fantastic movie, and it’s just the beginning. There are quite a few suits to unlock throughout the game, and even some powers and suits that are locked behind new game plus. Just like it was in Marvel’s Spider-Man, it’s worth collecting every one.

One of the things I genuinely enjoy about the storyline of Miles Morales is that this story is authentic. Miles genuinely wants to help people, and his heart is in the right place, but his inexperience gets him and the people around him into trouble time and time again. His growth feels real. His world is complicated and his secret identity only makes it more difficult to live a normal life. Over the course of about 10 hours we get our first taste of Miles as a protagonist in his own right, and it somehow feels self-contained and altogether too short. You know it’s a good game when all you want is more.

Miles isn’t on his own with his crime-fighting adventures — his friend Genke Lee is his “man in the chair” for this adventure. To help get the word out that you are here to help, he designs an app for the regular citizens of New York to request the assistance of their friendly neighborhood Spider-Man. As before, the city of New York is broken down into its various boroughs, with tech caches, activities, side missions and more to find and complete, but the app provides a way for some additional story elements to unfold.

I really only ran into one hiccup during my entire time with this game — during two early cutscenes the audio cut out entirely. Once the cutscene was over, everything went back to normal and I was on my way. No crashes, no animation glitches, no strange framerate hitches, and all on brand new hardware — that’s a feat in and of itself.

I’m always hesitant to hand out a perfect score on a game, especially in the beginning of a new console generation, but this game more than earns it. Marvel’s Spider-Man: Miles Morales shows us not only what’s possible on the PlayStation 5, but how immersive near-instant load times, mind-blowing haptic feedback, and realtime lighting given an extra bit of care can be. I had high hopes for Marvel’s Spider-Man: Miles Morales, but this exceeded my every expectation. This is one you won’t want to miss — it’s flawless.

With flawless lighting, excellent gameplay, innovative immersion, and a fresh new story, Marvel’s Spider-Man: Miles Morales is the sort of game that we’ll be talking about for the rest of the console generation. This is how you start a new generation of gaming.

Ron Burke is the Editor in Chief for Gaming Trend. Currently living in Fort Worth, Texas, Ron is an old-school gamer who enjoys CRPGs, action/adventure, platformers, music games, and has recently gotten into tabletop gaming. Ron is also a fourth degree black belt, with a Master's rank in Matsumura Seito Shōrin-ryū, Moo Duk Kwan Tang Soo Do, Universal Tang Soo Do Alliance, and International Tang Soo Do Federation. He also holds ranks in several other styles in his search to be a well-rounded fighter. Ron has been married to Gaming Trend Editor, Laura Burke, for 21 years. They have three dogs - Pazuzu (Irish Terrier), Atë, and Calliope (both Australian Kelpie/Pit Bull mixes).
Related Articles: Let's Play, Marvel's Spider-Man: Miles Morales
Share
Tweet
Share
Submit