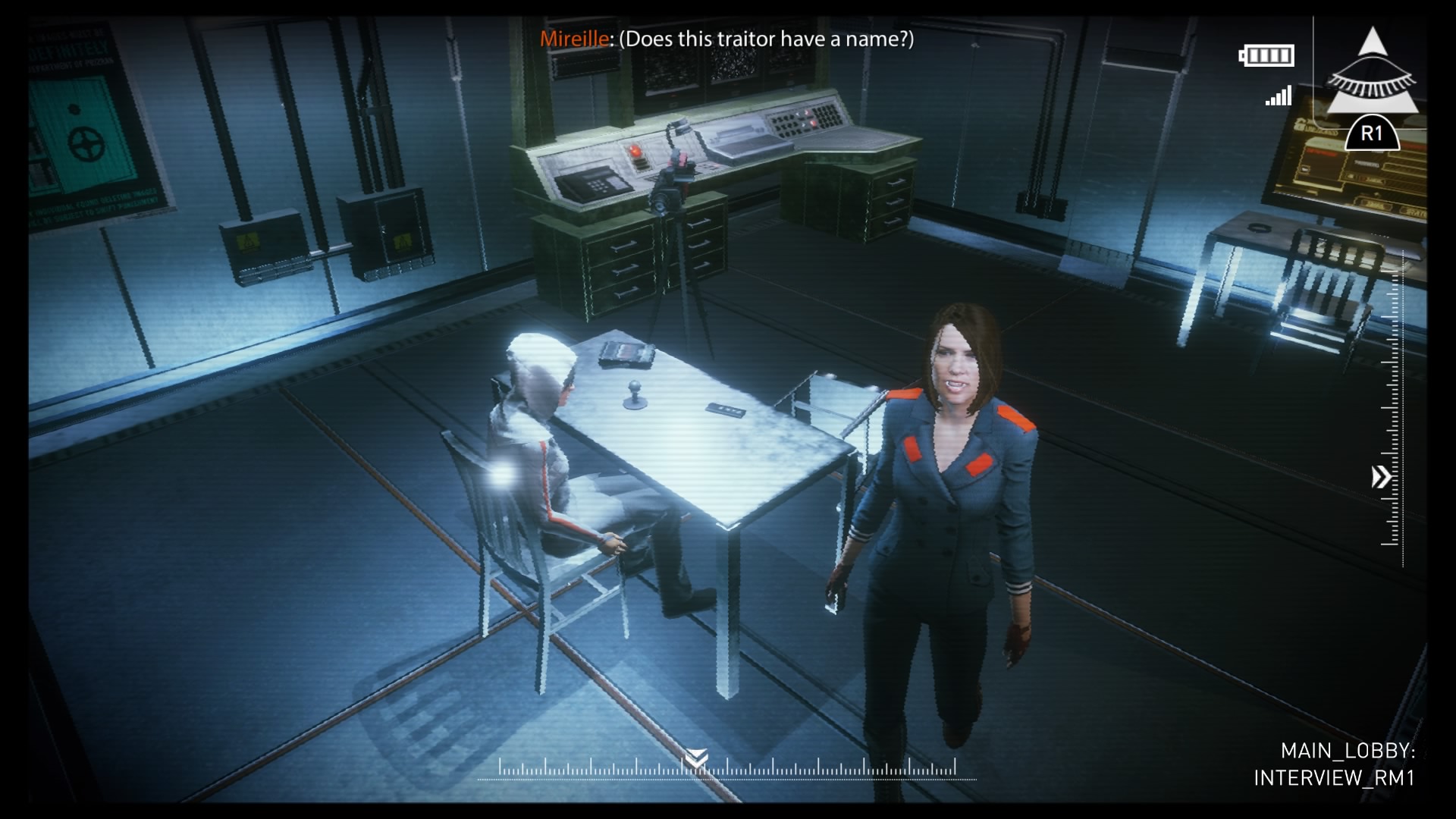 The story is about a young girl named Hope — a prisoner of a totalitarian state-run facility called Metamorphosis trying to escape to the outside world. This facility is run by a man named K. Treglasov, who prides himself on being called the Headmaster and created Metamorphosis with the idea of breeding children (or Pre-Cals) to his personal tastes of how the world should be shaped. He created this state and facility to separate himself, and his followers, from the outside world and — in his eyes — all of its disgusting, deplorable, and dangerous aspects that could potentially infect the minds of his Pre-Cals.

The initial conflict in the story comes from the Headmaster’s strict policy on the information allowed within the confines of Metamorphosis. The state’s own newspaper, The Morning Bell, spews biased slander against all who oppose the Headmaster, while Treglasov and his right-hand flunky, Head of Security Quinn Derringer, crack down on the allowed literature by burning books they deem unfit for the Pre-Cals. Naturally, as with any totalitarian regime and their aggressive acts of control, there is an uprising, and a few key characters infiltrate Metamorphosis to attempt to take down the Headmaster before he can complete his dastardly scheme. It’s a story that’s been told countless times, but the excellent writing, smooth pacing, and richly-detailed back stories make it feel fresh and interesting.

There is a colorful cast of characters on all sides of the fence, and some that will surprise you with who they are and where they truly stand. The majority of the characters are well-acted and the performances make their interactions seem natural and engaging. What takes away from the potentially intense scenes is the subpar graphical fidelity and character animations. The game looks like a slightly touched-up version of a mobile game (because that’s where it’s roots lay) and it’s a shame that it has a detrimental effect on the impact of the game’s otherwise excellent story delivery.

You play a major role in the story as well, as Hope and other characters speak and refer to you directly. The relationship between you and Hope develops over the course of the series, and strengthens as you work together to keep Hope safe and help her escape. Getting the player involved can be difficult to pull off, but Republique manages to suck you into the world and make you not only a part of it, but feel that you have a deep impact on how events will play out.

One of the most prominent ways you can engage with the story is by doing what adventure gamers do best — exploring and discovering stuff to read and listen to. Metamorphosis is littered with books, cassette tapes, television sets, recorders, computers, signs, letters, notes, and more you can interact with and consume to fully flesh out the world of Republique.

You help Hope by hacking into Metamorphosis’ security system OMNI, where you can control computers and other electronic devices, like security doors and cameras. Cameras are how you observe the game world and directly communicate with Hope. Each episode begins with Hope speaking to you through her phone. She asks you for help, and you oblige by jumping into the nearest camera. From here, you have an isometric view of the world reminiscent of the earlier titles in the Metal Gear Solid series. Here you can freeze time and gain visual access to all of the hacking options available to you. Let’s say you’re in a room with three cameras, a computer, two doors, and a phone. Once in this frozen view, each item will be labeled with a button mapped on the controller; by pressing and holding the desired button you can access that item, whether it’s eavesdropping on a phone call, jumping from camera to camera, or mapping out guard paths.

The Prizraks, the security guards of the Metamorphosis facility, have paths (some set and some not) that Hope must navigate around. She has three stances: crouching, walking and running. Crouching is for when Hope wants to be as quiet and stealthy as possible. Walking is for when she wants to look cool I guess, I never found a use for walking. Running is for when the alarm goes off and you need to double-time it. If noticed, she has two options: run and hide, or defend herself. Guards are always as fast or faster, so Hope can run, but she more than likely needs to find a locker, bush, or vent to hide in. After the guards lose her, they will give up their pursuit and go back to their paths.

If Hope can’t escape she must defend herself, but she can only do so with the help of certain items like pepper spray, tasers, and sleep mines. She can find these in lockers and locked boxes that you can hack into throughout the map. Without these items, Hope is defenseless and will be captured and thrown back into a cell. These cells, or detainment rooms, also act as a safe house where Hope can charge the OMNI battery used for various abilities and hacking into doors and lock boxes. Here you can also sell data points collected from interacting with items in the world, which can then be used to buy abilities. These range from passive skills like Ping, which allows the player to see guard icons on the map, and X-ray, which makes guards visible through walls to more active skills like Distract, which lets the player set off a noise-maker luring guards to it so a path can be cleared for Hope.

The passive abilities like X-ray and Ping were very helpful, but active abilities like Distract and Predict were less useful, and I found myself neglecting to use them as time went on. It was disappointing that none of the abilities were compelling enough to warrant their usage.

The tedium of Hope’s clunky maneuverability (even while running) was amplified with the added layer of camera controls. When you jump from frozen into regular viewing mode, NPC, guard, and Hope’s movements resume. This is where the controls lack in comparison to the PC and mobile versions. In those versions, Hope moves to a fixed point with a click or a tap, which makes scouting rooms ahead through the camera system, and having Hope follow the most direct path, simple and streamlined. On the PS4, you control the camera and Hope intermittently; this leads to some awkward back-and-forth that got to be pretty tedious.

The camera auto-switch functionality also created a lot of problems when navigating the world. If you scout ahead, have the camera set up in the next room for optimal viewing of the guards, and then switch to Hope to move her, the camera will often auto-switch back to the camera nearest Hope, completely disorienting you and losing the ideal viewing spot from before. Also, when transitioning from room to room the cameras auto-switch, and if they are at opposing angles and the player is moving Hope continuously, she will often go right back through the same door when the viewing angle flips. This is made even worse when there is a two or three second load time in between rooms. A lot of game time was unnecessarily spent just trying to get Hope to move where she needed to.

Being an adventure game there are, of course, puzzles. In Episode 3 you’re tasked with collecting information to write a falsified article on some of the Prizrak. To do this you have to explore a room for five items. You then match a picture of one of these items to a flashy headline from a coinciding recording, but instead of the matching process being more intuitive, it devolves into randomly combining a headline with a picture until there’s a match. The puzzles are easy, and most of them involve doing what you have been doing already: clicking things for information. Whether it’s scraping up dirt to write a slanderous news article about someone or perusing artifacts in a museum to gain information for a quiz to access a locked computer terminal, they are simple and didn’t involve much contemplation. If you’re looking for puzzle complexity, you will not find it here. All in all, there were only a handful of puzzles, so they were a very small part of the overall experience.

Republique’s gameplay is slow and surface-level, and navigating Hope and the OMNI system are convoluted enough to take some getting used to. There’s a balance between depth and simplicity that is trying to accommodate all players, but ends up alienating both. Republique falters at being extraordinary in any gameplay regard.

On the other hand, as the series progresses, the story script starts to look like the scribblings of a raving madman, while still managing to keep everything meaningful and enticing. I won’t spoil it for you, but Episode 4 takes this script, wads it up, throws it into the trash and starts writing on the walls like a deranged five-year-old. Episode 4 is, well, something else entirely. In fact, I can’t fully explain how Episode 4 fits into the rest of the series. The game mechanics are the same, but everything else changes drastically with almost no explanation, and could honestly be removed completely and no one would know the difference. That’s not to say I would want it to be removed, because it is a refreshing divergence from the rest of the cold, pressing, steel-like world of Republique; but it’s just a very odd section of the game that, if anything, I’m intrigued to find out why it was included.

With Episode 4 being the pinnacle, Republique is full of great story, fun characters, and a few twists and turns along the way. It’s an engaging episodic adventure that suffers from mediocre gameplay mechanics and a camera system that is unique, but at times feels finicky and unpolished.

On December 5, 1986, Josh was born into this world pink-faced and squalling. His only thoughts were, "WHAT IS GOING ON? WHO ARE ALL OF THESE PEOPLE? AND WHY THE HELL AM I NAKED?" 19 years later he bought an Xbox 360 and now plays and writes about video games. Life is funny that way.
Related Articles: Republique
Share
Tweet
Share
Submit