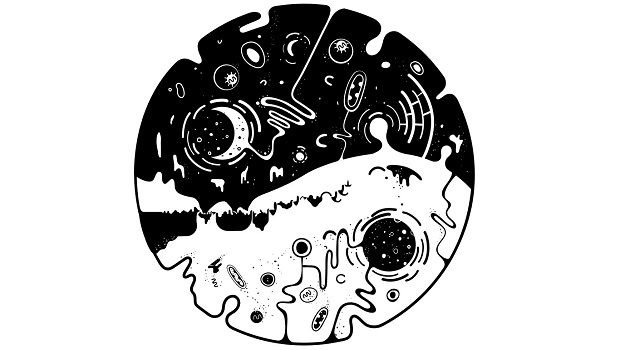 With triple-A games these days showing off how much they can achieve graphically, sometimes it’s great to just chill out with something simple. Ovivo is a great example of a game where less is more, as it depends on a singular mechanic to traverse its wonderful minimalist world. While it does have its hiccups here and there, Ovivo is a wonderfully charming game that relaxes you with unique stylized graphics and a mellow soundtrack.

So you think this’ll be an easy review? That’s where you’re wrong, kiddo.

In Ovivo, you play as a little blob named Ovo, who lives in a world that is literally black and white. By using its gravity shift move, you control Ovo through an assortment of levels, flipping up and down using the spacebar. For the most part, white backgrounds move you downwards while black ones move you upwards. You’ll have to plan your moves ahead of time in order to avoid falling to your doom or traps like spikes. Like Portal, your force will be dependent on the height from which you fall, so you’ll have to get creative on when and where you shift since you don’t have a jump button.

The first thing you’ll notice about Ovivo is that the graphics look cleanly simplistic. The black and white aesthetic shows across the whole world, and every creature and structure adheres to the monochrome color scheme. However, while the colors are limited to a binary palette, the world, looks remarkably crisp and detailed. It feels like I’m in a mandala-coloring page, which is both mesmerizing and relaxing. Everything from leaves and thorns to dragons and wolves are rendered as beautiful lineart style, which contrasts well in a black and white setting. The soundtrack is equally mellow, offering some chill electronic beats which just blend into the game’s visuals. It’s something that might not stand out on its own, but works as a great complement to the minimalist graphics on display.

The final views are equal parts beautiful and terrific.

Alternatively, the more active threats are shown to be whimsical, while creatures that can destroy you are lively and terrifying.  It feels like a mashup of the flash game Shift mixed with some of the drearier parts of Limbo, and both of those games shine in graphic simplicity. Once you finish a level, the game zooms out and shows you what you’ve been traversing all this time. These moments are pretty exhilarating; it was a marvel to see how far I actually traveled and the beauty of the screen itself amazed me. It felt like the equivalent of scaling a beast in Shadow of the Colossus and seeing the end product when you finally destroy it.
Just because the world and mechanics look simple doesn’t mean it’s a cakewalk. While the first few levels will ease you into the gravity-shifting gameplay, mid and late-game stages will test your patience numerous times. The game offers infinite retries (and if you do die, you’ll just end up at a previous spot not too far from where you perished), so it’s more of a task of persistence than anything else. For a game that’s essentially a one-trick pony, it relishes in that trick well, and it doesn’t overstay its welcome (lasting around a few hours at most). The game gets tricky later on since new concepts stretch the gravity shift mechanic in new ways (like a little flower vehicle that you can control as well as dragons that want to eat you). It’s actually quite an accomplishment to see how much the game gets done with one button and arrow keys. (There is an option for controller support, but the keyboard method is accessible and simple enough that this isn’t needed.)

While most of the game follows a linear structure (where you keep strolling along until you reach a huge orb that ends the level), there are times when you can go to the off-beaten path and try to grab little orbs as well as three bigger ones (none of which are required to complete a level). Grabbing the latter also grants a Steam achievement, which also displays a line of text (more on that later). While you’ll most likely grab these on the way in the beginning, later levels will go out of their way to provide you with a challenge. I spent a good 10 minutes trying to get a tricky orb stuck between a wheel of spikes, and it felt great to finally collect it. Oddly enough, it isn’t the difficult sections that I had a problem with, but rather the ones that were more action-based and relied on constant movement to advance. These segments turn Ovivo into an action-platformer rather than a puzzle-platformer, which is a bit unsettling when, for the most part, it aims to be a relaxing experience. They undeniably look great, but are a tad distracting in the short-run. However, these segments aren’t too prevalent, and because of the infinite retries, the pain is mitigated to just be a minor annoyance rather than a deal-breaker.

While the graphics and core gameplay is rock solid, the presentation is a bit off. The game is presented with no text; the only reason I know that Ovo is called what it is was because the Steam page offered some backstory to the little blob’s world. This also bleeds into menus unfortunately, and it’s a bit of a problem when you spend a minute or two trying to orient yourself with the main menu. Early on I wanted to replay a level, but ended up stuck for a bit since navigation was difficult with the text-less screens. I get the design choice here, but it’s frustrating to say the least. Additionally, while the game’s story is presented with symbolic imagery, it’s incomprehensible; I didn’t get the story at all, and even through glancing at the text from Steam achievements, still scratched my head at everything. It’s best to just skip the “story” and get to the gravity-defying bliss that Ovivo offers.

Filled with a relaxing soundtrack and delightful minimalist visuals, Ovivo is a mellow game that has a feeling of whimsy across its world. While the presentation may be a bit lacking, this game is a unique treat in the platformer genre.

Elisha Deogracias is an aspiring accountant by day, freelance writer by night. Before writing for Gaming Trend, he had a small gig on the now defunct Examiner. When not being a third wheel with his best friends on dates or yearning for some closure on Pushing Daisies, he's busy catching up on shonen manga and wacky rhythm games. Mains R.O.B. in Smash. Still doesn't know if he's a kid or a squid.
Related Articles: Ovivo
Share
Tweet
Share
Submit