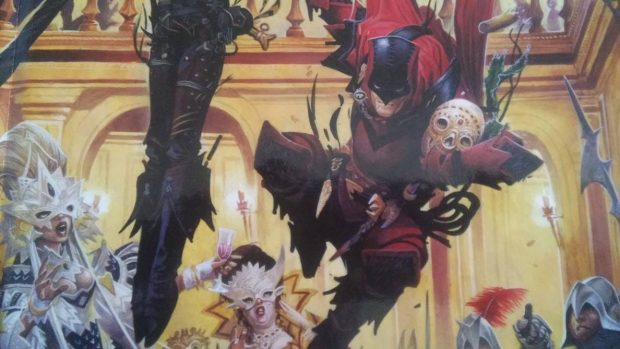 To my dearest Lord Dumas,

I write to render a report on Ultimate Intrigue,  the most recent in the line of supplements from the esteemed Pathfinder system, which outlines rules for deeds of daring heists, societal mystery, and political strife. I admit myself immediately intrigued by this outing, which promises to add a layer of depth heretofore unseen in this game of high action exploits. It burdens my heart to report that this layer is all laid overtop the existing system, adding complexity by means of extra rules that do not deign to integrate themselves with the existing structure of Pathfinder. Paizo has long been plagued by their own successes, requiring a constant stream of novelty in terms of new classes and options that serve to clutter the elegant system they have created. Herein is found no exception.

and mental daring. The art mostly consists of portaiture depicting the many characters which might inhabit such a cerebral campaign. In this sense it lacks for diversity, but inspecting these selfsame people we find a rare attention to detail. The slight references to past cultures hint at a deeply researched understanding of the genre. Over time I saw not only operatic phantoms but suggestions of Monte Cristo, Jekyll and his despicable Hyde, as well as many others that properly displayed the work’s influences and themes.

The mechanical underpinnings left me at times pleased and at others disappointed. The designers displayed much wisdom in adding only a single class to the game, utilizing new archetypes for existing classes to help you fill out your game. Instead of adding to the bloat of options Pathfinder has found itself afflicted with you can organically alter existing classes to fit the setting. Every one of these fits in logically with both the genre and the classes. I found myself stunned with the possibilities and instantly created new character concepts in my head. The only new class, the Vigilante, is an appropriate addition consisting of a character with dual identities (much like the famed Zorro who has been causing such trouble in the cities). You have received some news of this already from its creator, but it would do well to recount it here. One identity is a mundane socialite whose abilities center around manipulating those around him. The vigilante identity, which takes a minute to change into, is the combat powerhouse who must use stealth and trickery to survive. The class burdens its player with too many details and separate abilities, many of which are too specific to be fit for general application, but overall serves as a stupendous focal point for plots and roleplay.

The feats and spells are less inspired. Pathfinder’s feat economy has always been a subject of some trepidation, and never more so here, where so many are too specialized to be of any serious use. How often would an adventurer realistically make use of the disguise skill to fool a magic item? Some are perfectly serviceable but the majority do not make a firm enough mark on the game to be worthy of much consideration.

The book’s section on Mastering Intrigue which purports to assist a neonate with creating such an adventure is a quizzical mixture of helpful and unnecessary. It lays out the fundaments of an intrigue game expertly, but whilst reading I could not shake the feeling that these elements should be obvious to most participants. Do we not all expect that such a game would be based around social maneuvering, concealed plots, and duplicitous power plays? The section on heists is laid out as if it were a rules explanation but in reality only offers prototypical suggestions on how to create one. While I am certain many will find these step by step introductions helpful they do not have enough substance to require a purchase.

An example diagram for a heist. This tool could just as well be kept in one’s head, but I cannot fault them for providing a means of organization

The social combat system is the most disappointing of all. It begins with another mundane rundown of basic social scenarios and itself is only the most simplistic framework on which to form a social duel. Characters have social initiative and must choose from a number of tactics (from a dedicated list that will see extensive referencing because it is too intricate to memorize). I am pleased that it incorporates elements of bias and the enemy’s proclivities that require a player to pay attention and think strategically, but the ultimate gambit is a series of skill checks based off of a list of abilities. Worse of all is the fact that the social combat feels layered on over top of the Pathfinder rules rather than integrating with them organically, creating a homunculus of a system with separate parts grafted on for some fell purpose.

Of course, every hero must have a nemesis, and Paizo deemed it fit to grant them their own dastardly section outlining their abilities and suggested plots. Ultimate Intrigue provides a list of their plans, divided by type and intensity, that give the players experience upon foiling. What we have here is essentially a list of quest hooks masquerading as a new system, but I cannot fault them for at least providing game masters with tools to fill out their games.

This plot thread is not meaningless, but are we to be believed game runners cannot envision such things effortlessly on their own?

Lastly I find myself recollecting the spells and equipment section, which almost requires no recounting. Each is exactly as you might suspect: a list of objects or abilities that fit with the theme but there are none that truly excite. Mark me not incorrectly, these sections provide you with exactly what you need and there is no fault to find in them; those seeing fit to run an intrigue game will find themselves endowed with the tools they need to do the job, but they will never feel inspired. Here I find myself coming to the crux of the matter: Ultimate Intrigue works. It serves its function and feels no impetus to go further. The tool is a useful one but also extraneous, even for those certain they want to delve into the depths of the genre. I myself would pick a few choice sections from it and largely pass by the rest in favor of my own creations.

Ever yours,
John of the House of Farrell

Ultimate Intrigue gives its players a bevy of tools to set their game in a world of fantastical plots and daring. Many of these tools are best left aside, however, and some others are unnecessary, begging the question of whether anyone needs to make the purchase.

John Farrell is a legal aid attorney specializing in domestic violence, living in West Chester Pennsylvania. You can listen to him travel the weird west as Carrie A. Nation in the Joker's Wild podcast at: https://jokerswildpodcast.weebly.com/
Related Articles: Pathfinder Ultimate Intrigue, Tabletop
Share
Tweet
Share
Submit