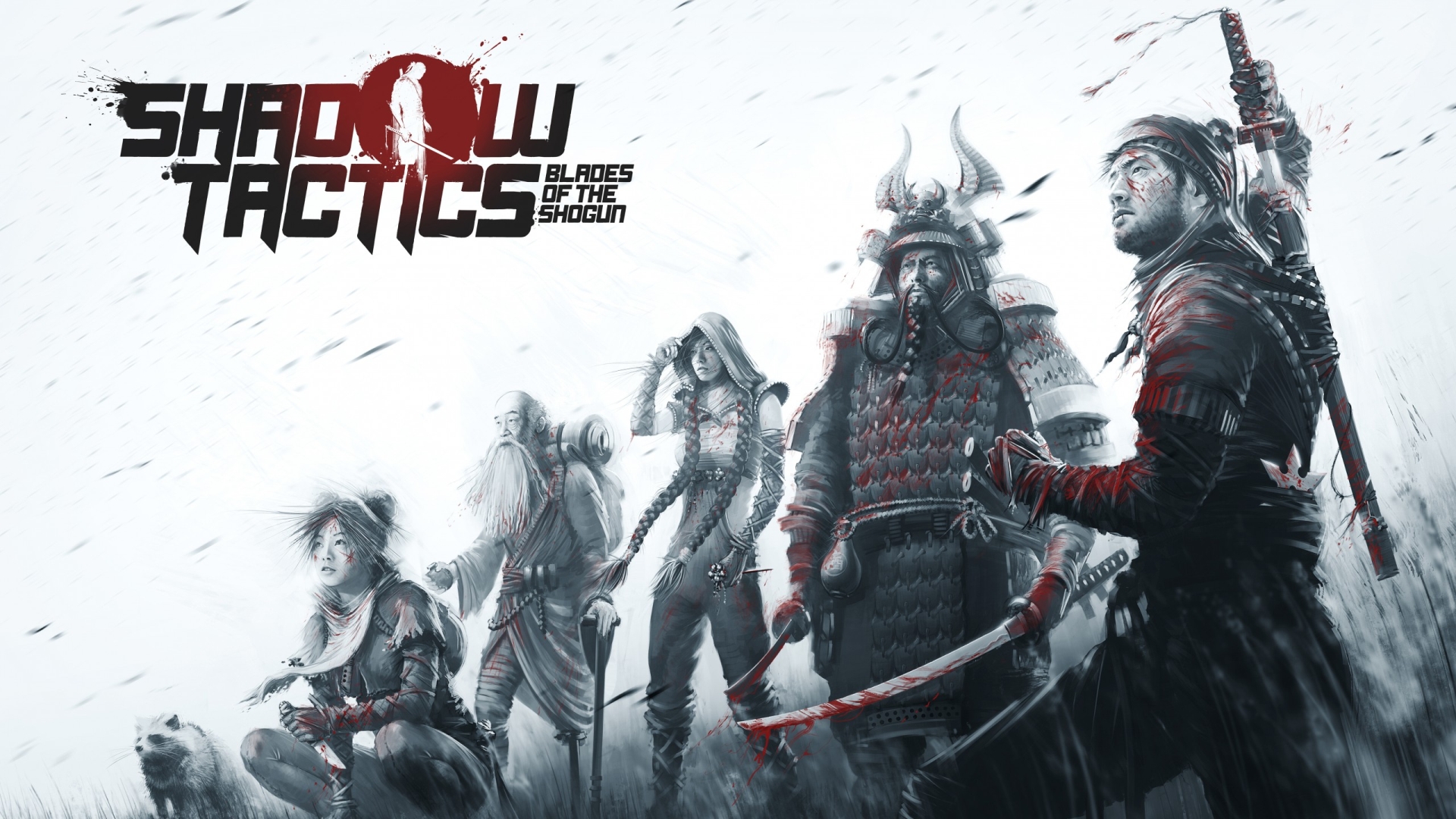 Peer pressure is a hell of a drug, and this new addiction is the fault of Brad Galloway, Managing Editor of GameCritics.com — he did this to me. After he mentioned it fairly relentlessly, as did several others, I realized that I was completely unfamiliar with the game. But I’m busy – I don’t have time for things off the beaten path. Here I am, days later, having put all of those games aside — I’m hooked on Shadow Tactics: Blades of the Shogun.

If I were to describe Shadow Tactics: Blades of the Shogun, I’d have to wonder if developer Mimimi Productions was perusing my favorite games list, because it feels like a blend of Commandos and some tactical version of Tenchu. Taking place in the Tokugawa (or Edo) era of feudal Japan, the Shogun of the country has stabilized the country, but that peace is now threatened by a shadowy warlord named Kage-sama (I love that the Japanese even refer to their enemies in the formal and respectful nomenclature – sama is reserved for positions of high respect). Four skilled assassins (led by a samurai) are recruited to crush the rebel warlord, but this is Japan — nothing is ever quite what it seems.

In this review you’ll find a lot of comparisons to the Eidos / Pyro Studios title, Commandos: Behind Enemy Lines from 1998. In truth, there’s a lot the two games have in common, both in terms of presentation, and gameplay. While Commandos had players battling Nazis, Shadow Tactics has a far more nuanced storyline.

The five soldiers you’ll command in Shadow Tactics: Blades of the Shogun are a spy, sniper, thief, ninja, and samurai – not exactly the honorable and noble group you might put in charge of a secret mission for the soul of the nation. Each a specialist in their trade, the balance between them, and how you use their special skills makes the difference between success and failure. Yuki, a self-taught kunoichi (female ninja) is able to set a spring-loaded mine called the Little Trap, which will instantly kill anyone but the heavily armored samurai. She can also use a bird whistle to distract foes, attracting those guards to their untimely death. Hayato, the ninja, can distract enemies with pebbles, take down an enemy with shuriken (that he’ll have to retrieve to use again), and can scale to the rooftops using his grappling hook. Mugen, the samurai, can use his Sword Wind ability to kill any non-samurai around him with a single strike, lift heavy objects, and lure foes by lobbing a bottle of sake in their path. He is also able to not only run while carrying a body, but can carry them two at a time. As samurai are extremely dangerous, Mugen is the only one of the five capable of taking them head-on.

The final two soldiers, Aiko and Takuma, are unique among the crew. Aiko can wear a geisha or priestess disguise, distracting most enemies, as well as temporarily blind guards using sneezing powder. Samurai can see right through her disguise, and she has no capacity to kill anyone, so she must tread carefully. Takuma, the sniper, also has grenades, can distract foes with dancing and chirping, and in a nod to popular Japanese culture, has a pet “tanuki” – a raccoon-like creature named Kuma who can lure enemies into traps. Because Takuma is an older gentlemen with a peg leg (which is what converts to the sniper rifle, by the by), he’s not able to engage foes directly, or move bodies of slain foes. All of this seems somehow familiar…

The Straw Hats are very difficult to distract from their guard work.

It is easy to see the Commandos blueprint underneath Blades of the Shogun. Tiny, Duke, Fireman, Frenchy, and Lupin all align to their obvious analogs here, though how they are used is still challenging and different – being good at Commandos will not automatically make you good at Shogun.

Commandos, a completely hand-drawn 2D game, was an absolute triumph, but it was also a product of its time, its immovable camera carrying all of the baggage that implies. Blades of the Shogun, on the other hand, is fully 3D, equally as gorgeous, but the camera rotates a full 360 degrees. This takes a little bit of practice to get the hang of where to place it, but given the forced-patient nature of the game, you should acclimate quickly.

Breaching a palace is even more difficult than it sounds on the surface.

One of the things I love in Blades of the Shogun is that, while you do feel powerful, you never quite reach unstoppable. Often, enemies outnumber you by a 10:1 ratio, and one misstep can leave a character exposed to fire, ending your mission quickly. Having Takuma in an elevated position is absolutely devastating to the enemy…until he runs out of ammunition. Similarly, Mugen has more health and can dish more damage, but he uses a Katana and Wakizashi, which are both reliant on melee range against foes who carry muskets. That isn’t to say you have to play perfectly at all times, but over-reliance on an individual character trait can greatly hamper your success if you can’t change tactics in a pinch.

While simply murdering everyone and dragging off their bodies into the bushes is a valid tactic, much like the game Hitman, a perfect accident is a cleaner solution that is less likely to raise the alarms. Throwing a rock that would otherwise distract a foe onto the head of a nearby ox instead will cause said ox to get pissed off and kick backwards. With proper placement, this could be a fatal accident for an unwitting guard. Similarly, yanking the blocks on a propped and parked supply cart can cause it to race down the hill, crushing scores of foes in its path. These things happen…and with a little help, you can help them happen more frequently.

If you are the type that wants to play a mission perfectly, there are a few interesting “badges” you can earn on each mission. The tutorial, for an example, has nine extra optional tasks including completing it without touching any bushes, not killing anyone but mission targets, not raising any alarms, or even speed running it in under a certain time limit. Considering my careful run of the second mission took me an hour and five minutes, and the speed run badge asks that I do it inside of five minutes and 30 seconds, I’ll need some more practice to earn that one.

In point of fact, if you aren’t using stealth in Shadow Tactics: Blades of the Shogun, you’d better be making very good use of the three quicksave slots, as you are going to have a very tough time. This game really isn’t built for an all-out blitz, and just trying to rush foes and take them out is going to lead to a lot of frustration. Learning the powers of each one of your team members, and using them to the best of their ability, is the key to success. Patience, observation, learning guard patterns, and striking (or avoiding) at just the right moment is the key.

To help in this, there is a Shadow Mode that allows you to queue up a single action for each character, which will be executed simultaneously when you press enter. It’s crucial in later missions, when it becomes necessary to take out several guards with overlapping view patterns at the same time, lest one of them sound the alarm. While this mode is entirely optional, I cannot imagine completing some sections without it.

One of my favorite things about Shadow Tactics is that the team included Japanese voiceover options. It’s the sort of thing that could have been easily left on the drawing board, but it adds a real air of authenticity to a game set in Japan. While I appreciated the voiceover work in English, I appreciated the native language option even more.

Shadow Tactics: Blades of the Shogun takes place across 13 missions, taking easily two dozen hours to complete. Better still, there is no ‘right’ way to complete those missions, meaning completing them again under new tactics keeps the game fresh. There’s nothing quite like executing the entire opposing force, or silently completing a clandestine mission, leaving a wave of corpses or everyone alive as you see fit.

Hiding the bodies in the foliage will keep the alarms at a minimum.

The best part about Shadow Tactics: Blades of the Shogun is that you don’t have to take any of what you just read as truth – you can try it for yourself. In a final nod to a previous generation of games, there’s a demo on Good Old Games for you to download and experience a new take on the best examples of a game genre we thought lost to time.

Shadow Tactics: Blades of the Shogun

An excellent and challenging update to a familiar formula, Shadow Tactics: Blades of the Shogun is one of those games that makes you cheer at your well-planned success when everything goes off without a hitch, and groan at your own poor planning when it doesn’t. It gets so much right, that the relentless difficulty, and slightly less gorgeous console port can’t mar its beauty. This one snuck up on me, and I couldn’t be more glad that it did.

Ron Burke is the Editor in Chief for Gaming Trend. Currently living in Fort Worth, Texas, Ron is an old-school gamer who enjoys CRPGs, action/adventure, platformers, music games, and has recently gotten into tabletop gaming. Ron is also a fourth degree black belt, with a Master's rank in Matsumura Seito Shōrin-ryū, Moo Duk Kwan Tang Soo Do, Universal Tang Soo Do Alliance, and International Tang Soo Do Federation. He also holds ranks in several other styles in his search to be a well-rounded fighter. Ron has been married to Gaming Trend Editor, Laura Burke, for 21 years. They have three dogs - Pazuzu (Irish Terrier), Atë, and Calliope (both Australian Kelpie/Pit Bull mixes).
Related Articles: Let's Play, Shadow Tactics: Blades of the Shogun
Share
Tweet
Share
Submit