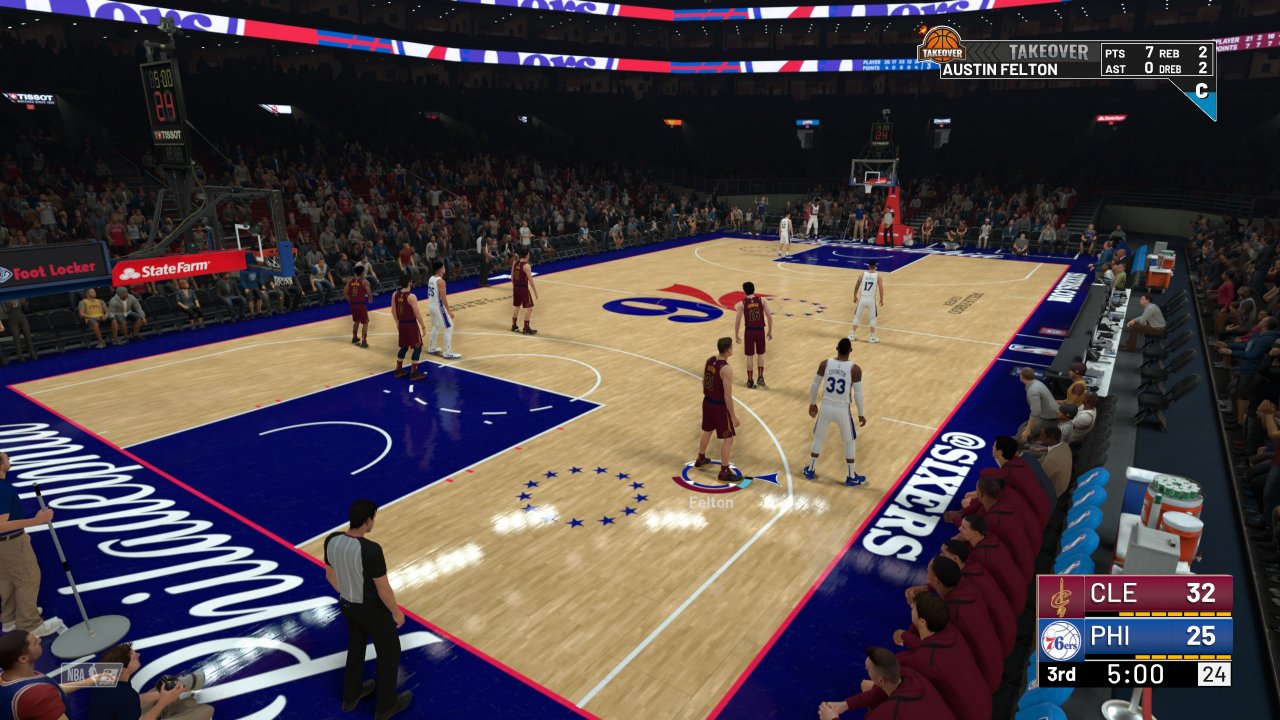 NBA 2K19 is at its best when you are shredding the defense to attack the basket for a dunk or layup. The animations are fluid, the players are lifelike, and everything just feels so smooth. In terms of gameplay, this is definitely the best NBA 2K has ever been. Unfortunately, in terms of progression, this is the worst NBA 2K has ever been. The microtransactions have wrecked the progression system to the point where grinding levels just isn’t fun. This is a true shame because this could have easily been the best basketball game of all time.

Before we dig too deep into the game, it is important to note just how good, and bad, this game looks. While the characters look as good as always, what separates this game is how good they all look in motion. Characters now effortlessly combine dribble moves, compared to past entries where they looked a little choppy. Players attack and absorb contact in realistic ways that all adds up to a fantastic presentation.

The shootaround returns and is unchanged. It is still a good way to get a feel for your shot.

As soon as the game leaves the court, the experience becomes horrendously unpolished. Players just fade through everything; chairs, coaches, other players, it doesn’t matter. Nothing can hold back these ghostly players. This isn’t a rare occurrence either, this happens just about every time the game cuts from the action on the court, such as during a time-out. For how good this game looks on on the court, these glitches are glaring. Thankfully, these don’t seem to impact the half-time and pre-game shows with Shaq, Kenny, and Ernie. These shows remain entertaining as the three play off each other well to create interesting discussions.

2K is nothing if not consistent as the gameplay is just like the presentation. It’s fantastic when you are on the court playing ball. Everything else? Boring, dull, and pointless. In my career, you can go to gym to try and earn badges but progression is so slow and there is no easy way to work on certain badges. Outside of free throws, most badges don’t have any set way to level up making the gym useless. Once you level up stamina even a little bit, the Gatorade station becomes useless. In fact, don’t even go in the Gatorade building. The game has a bad tendency of getting stuck in animations there forcing a restart. I also hate how whenever you do a promotional event for VC, you are forced to go to your agent’s office and watch a cutscene before getting the check. This is a pointless step that takes me out of what the game does best, basketball. However, I do like how the events are now generally automatic. In 2K18 you had to waste a lot of time doing boring events like running around the neighborhood in a shirt for a pathetic amount of VC. The amount of VC you get is still pathetic, but at least now you it doesn’t take any time. I’ve yet to be sold on the whole neighborhood idea. It just pads out the time it takes to get into a match, or get a haircut or tattoo.

Shaq, Kenny, and Ernie return and are as entertaining as ever.

Of course, with MyCareer comes the obligatory stupid story that follows your character. Every game now is like a performer shooting themselves in the foot before successfully walking across a wire 200 feet in the air. Yeah it was cool, but why did you shoot yourself in the foot exactly? The story mode has bad voice acting, bad writing, and is just overall bad. I highly recommend skipping it. You might miss out some iconic characters like Jackson Ellis and ATM, but skipping it is worth it. Of course, by iconic I mean completely forgettable and I have no idea why 2K thinks they have something with these recurring characters. 2K is way better off ditching these incredibly scripted storylines and focusing more on having us build a brand up through our play on the court. After all, it is called MyCareer for a reason; we want to make it our own.
The other game modes are entertaining, but less fleshed out. MyTeam is the next largest and is fun enough but is also dragged down by a terrible progression system. The biggest issue is that it also uses VC. This means you can either upgrade your character for MyCareer and online play or get packs for MyTeam. This is stupid. It means after the basic tutorial stuff that gifts you with some packs, it takes a lot of time to really a great team. While they do have a secondary currency for MyTeam, it takes a lot to buy packs and it can’t be used to purchase all the different packs that VC can be used for. While I love the idea of getting packs to build a team, the progression is so slow and drains resources from other areas of the game so I just don’t want to do it. MyGM aslo returns and is by far my least favorite. I like the idea, but it is just as bizarre as always. The biggest issue is the NPC is terrible at trades. Not much to say on this one. It is entertaining enough, but lacks the depth required to truly make it stand out.

Online play is as fun, but personally not for me. My biggest issue is that the people who pay for VC immediately have a huge advantage over those who didn’t. It is pay-to-win. I don’t want to be punished because I didn’t give 2K more money. My next issue is far more personal; I don’t like luck in my competition. At the end of the day, basketball video games have luck involved and it irks me. I want to win and lose based on my own skill; not because of a lucky shot. While skill is still paramount and trumps luck, the luck aspect will always be there and it will always annoy me.

Purchasable VC really is what drags the game down. NBA 2K19 was clearly designed with an emphasis on purchasing VC rather than earning it in the game.

Now we get to the heart of the problem: NBA 2K19 wasn’t designed to be a great basketball game, it was designed to be a great way to get players to cough up more money. That’s why progression is so slow and why MyTeam and MyCareer share a currency. The game is obviously designed to be boring to level up so buying VC becomes a more enticing option. That is bad game design. It may be a good business decision, but I don’t review business decisions; I review video games. Microtransactions in NBA 2K19 ruin what could otherwise have easily been the best basketball game ever made and that is a true shame.

NBA 2K19 is a fun basketball game held back by unnecessary bells and whistles alongside intrusive microtransactions. The basketball is second-to-none and the players feel and look incredible. It is a true shame the game is shackled by microtransactions which make progression a grind both for MyTeam and your player.

NBA 2K19 is a fun basketball game held back by unnecessary bells and whistles alongside intrusive microtransactions. The basketball is second-to-none and the players feel and look incredible. It is a true shame the game is shackled by microtransactions which make progression a grind both for MyTeam and your player.

Austin Fern has been playing video games his entire life. The first console he truly fell in love with is the PlayStation 2 with Sly Cooper, God of War, and many others really leaving an impression. He enjoys all genres of games from FarCry 5 to Danganronpa and everything in between.
Related Articles: NBA 2K19
Share
Tweet
Share
Submit