Oh hey, another shoot-em-up! It seems we’ve been getting a ton of quick-paced shooting games, and they’ve been solid on the Switch. The recently released Rigid Force Redux takes the 2018 side-scrolling shooter and improves the experience on the go, with great performance and a charming take on its shooting mechanics. 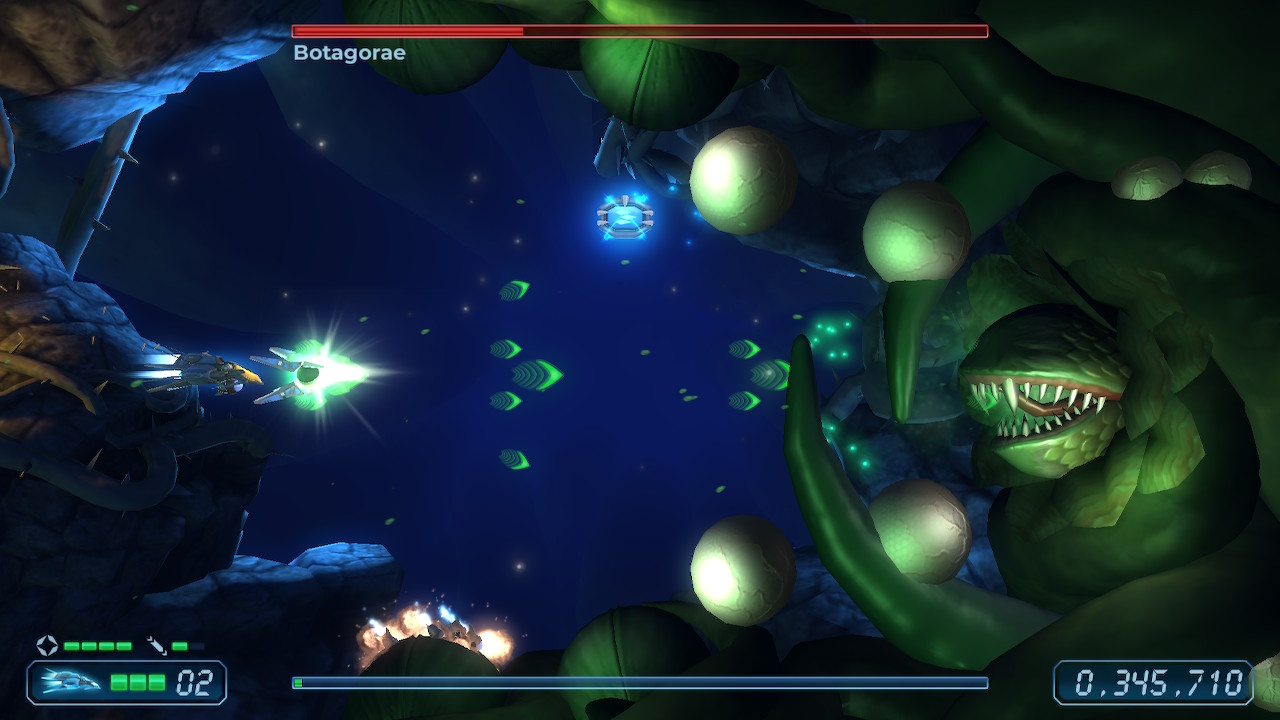 Rigid Force Redux puts you in the role of piloting a new ship created by the United Planet Freedom Forces, who is trying to save everyone from intergalactic threats. Armed with the AI Psye, you’ll travel across six side-scrolling stages, avoiding enemies and hazards with limited hits and continues; it’s not the most advanced story, but this isn’t a genre that normally relies on it.

The thing that I really loved about Rigid Force Redux is its upgrade system and versatility with shot types. You can collect primary and secondary attacks; the primary attack can only be changed, while the secondary attack can be upgraded if you collect the same type. In addition to this, you also have energy that you can use by destroying enemies, which can either give you a powerful shot or an energy sword that can nullify nearby bullets. You also have Force Shards, which are little drones that you can recruit in order to help shoot with you. These drones are probably the most unique thing about Rigid Force Redux, as they act as a way to shoot behind as well as focus your energy on a shot. Since you can position them one of four ways (either all the way behind or front, or a balanced middle left or right), they’re perfect for defending yourself from the backside. This is extremely helpful and means you can have things flying left and right while still feeling fair since you can potentially attack everything. 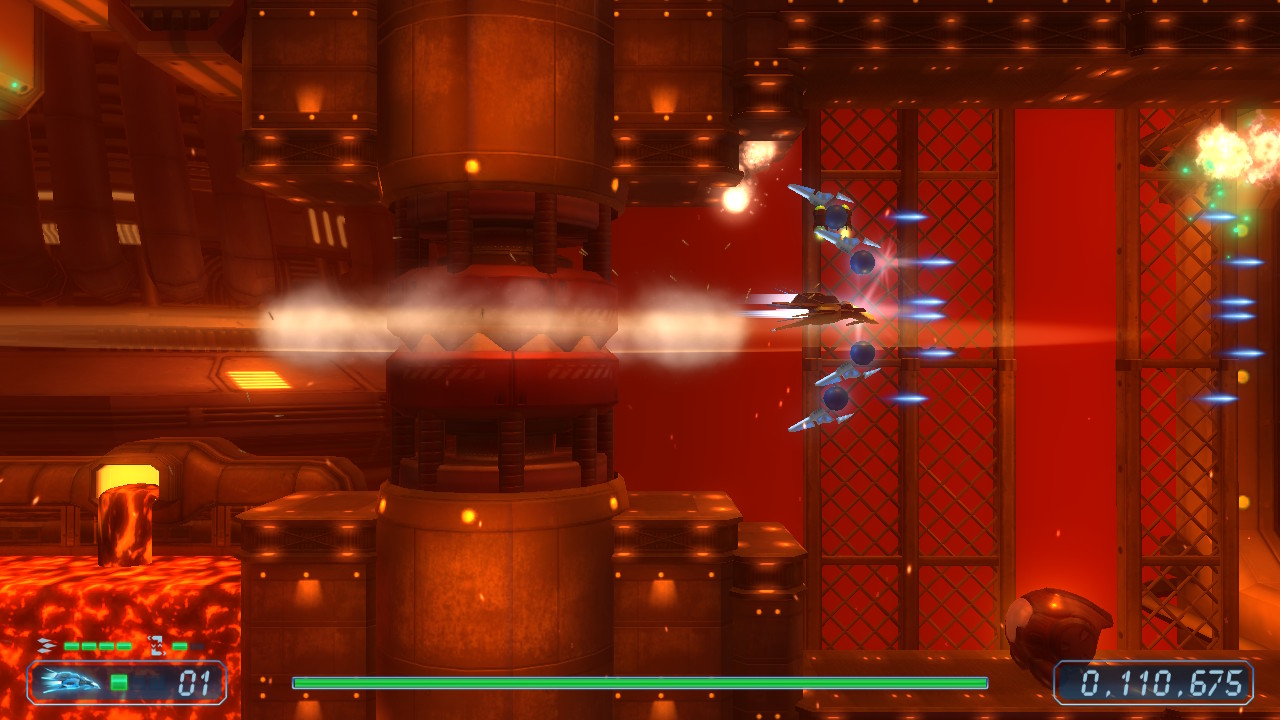 While the learning curve to control everything to its maximum capacity is steep, once you get the hang of all the mechanics, it becomes a deep, satisfying experience to master. I certainly enjoyed the variety of attacks given to me, and while I preferred some upgrades more than others (especially the laser), they’re all viable with the right skill level. If there was an issue I had with these mechanics, it’s that it’s difficult to see which powerup I’m getting; if I picked up a secondary weapon and didn’t want it, I had to reset my current power loadout and live with it until I picked up the same powerup (which is a bit hard to see in the heat of battle). Also, there’s no indicator that I have enough energy stockpiled for my energy sword, which caused some unfair deaths because I thought I had enough to use the technique but didn’t have it by just a hair. They’re minor frustrations, but frustrations nonetheless. 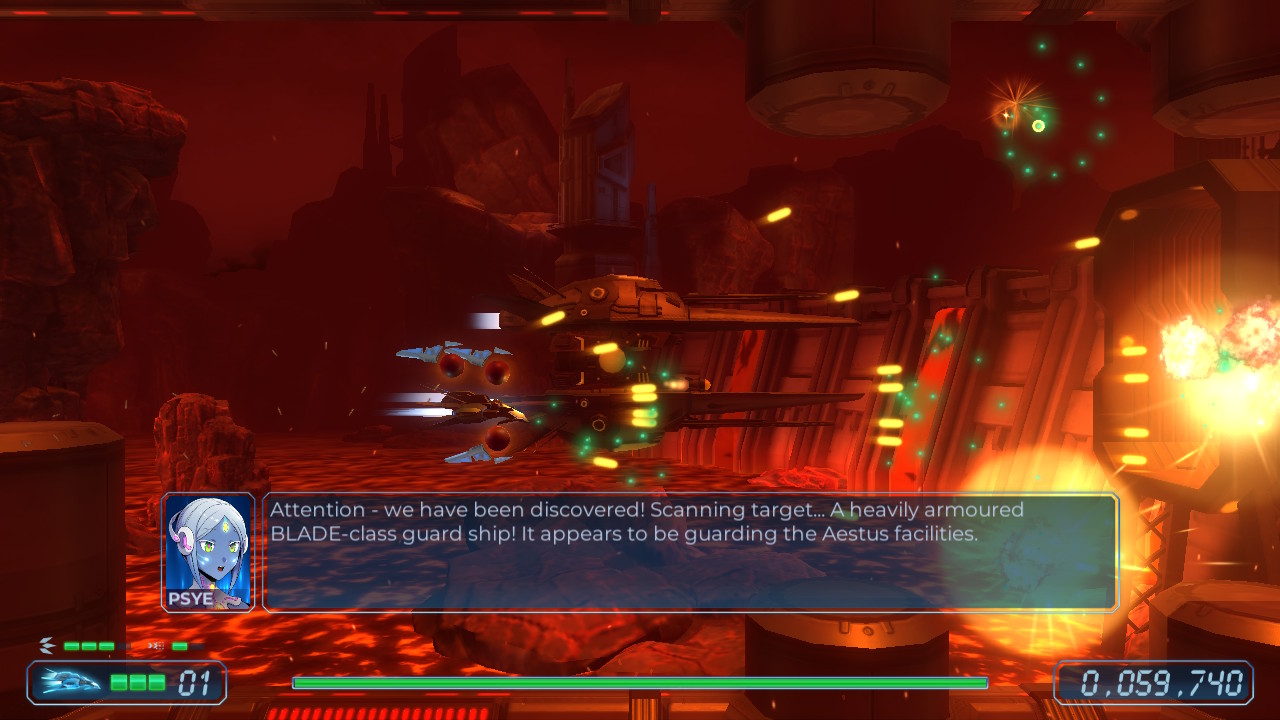 Speaking of difficulty, this is one of the harder shoot-em-ups to play, but because of its accessibility, I would recommend it to even casual players of the genre. Even easy mode is pretty challenging, but due to the innovative mechanics and interesting bosses, there’s a lot to love for fans and newbies alike. Sure, you have your regular story mode, but there are also arcade and boss rush modes for those that just want to get straight into the action and dominate the leaderboards; in addition, there are 40 in-game achievements that will definitely get seasoned players in the mood to replay this over and over again. It takes around an hour to do a whole runthrough of the game, but considering the amount of content in this package, I think it’s a perfect length.

In terms of performance, Rigid Force Redux shines with its near constant 60 FPS framerate in portable or docked mode. This is fairly crucial in a genre that relies on lightning-fast reflexes, and it makes the game stand out from its competition because of how silky smooth it looks. While the settings feel remarkably similar to games like R-Type or Sine Mora EX, there’s enough in the mechanics that make the game worth playing. You can check out the first bit of gameplay in the video above, and I was impressed with the results.

Rigid Force Redux is a charming little side-scrolling shoot-em-up that separates itself from the pack with a wide array of abilities and attacks. The smooth performance and abundance of achievements are a wonderful package that you should definitely play if you love the genre.

Elisha Deogracias is an aspiring accountant by day, freelance writer by night. Before writing for Gaming Trend, he had a small gig on the now defunct Examiner. When not being a third wheel with his best friends on dates or yearning for some closure on Pushing Daisies, he's busy catching up on shonen manga and wacky rhythm games. Mains R.O.B. in Smash. Still doesn't know if he's a kid or a squid.
Related Articles: Indies, Rigid Force Redux
Share
Tweet
Share
Submit