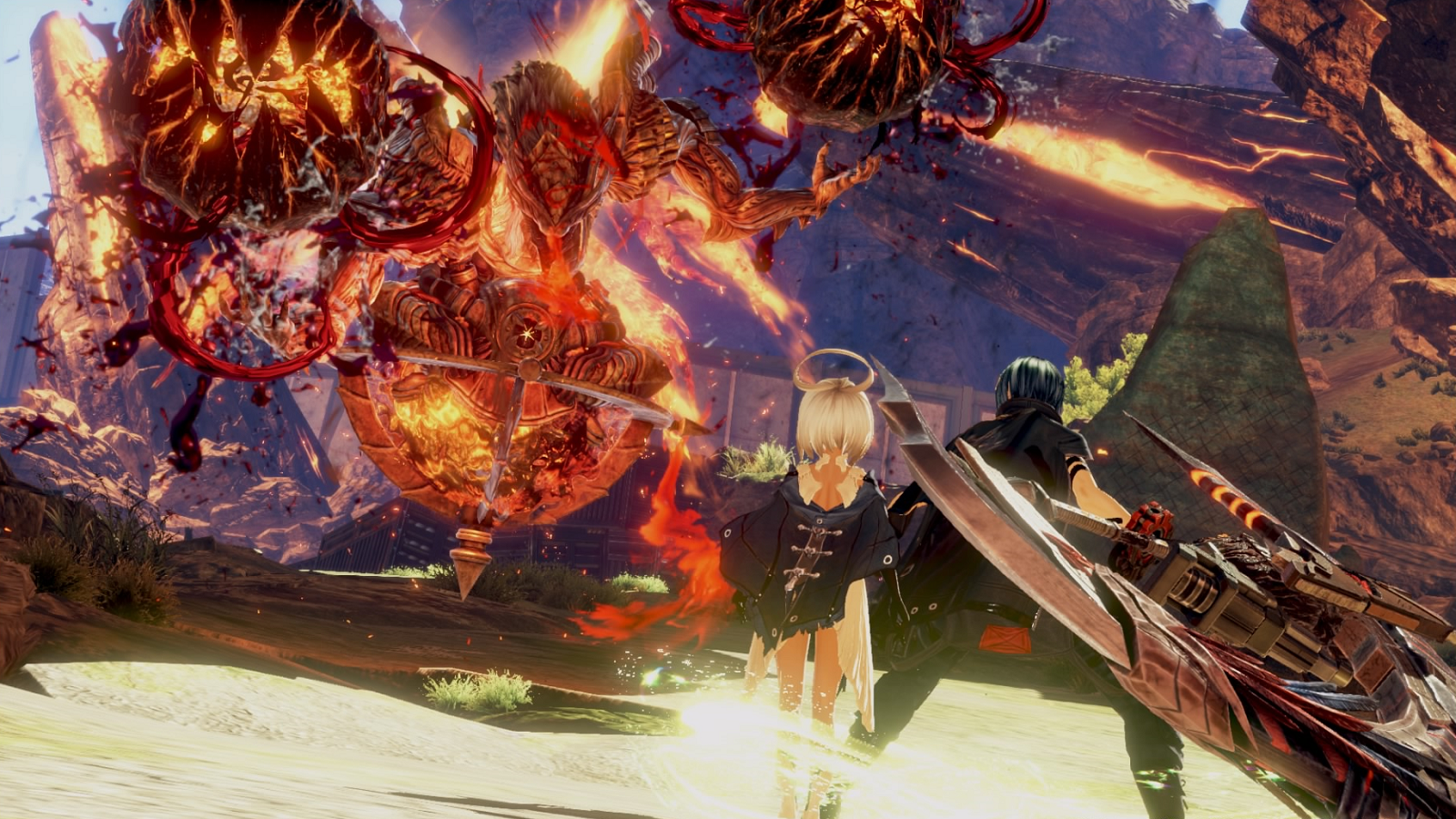 New Aragami, but the same old tricks it seems. God Eater 3 continues the series tradition of blending together lackluster progression, melodramatic storytelling, outdated visuals, and one-note combat to create tepid Monster Hunter clones. The game takes the lessons learned from its predecessors and proceeds to do absolutely nothing with them.

From the ever-growing Ashlands comes a new breed of Aragami known as the Ashborn—monstrously strong beings that thrive in the Ashlands’ toxic environments. In response to the rising threat of the Ashlands, humanity creates their own weapons in the form of special Adaptive God Eaters. On top of being stronger than your average God eater, AGE units are resistant to the Ashlands’ toxicity, nullifying the threat of the Ashlands completely. That’s a win for humanity, but a substantial blow for any potential gameplay developments.

The narrative of God Eater 3 plays out like any other in the series, this time featuring a new cast of two-dimensional archetypes eager to step into the shallow shoes of their predecessors. Between hunts, players can expect a big helping of exposure dialogue with a side of filler text to read. These rewards don’t come easy, however. After a hunt, the mission assignment desk will remind players that various NPCs need your attention, marking the start of a short, but rather inconvenient game of hide-and-go-seek as you search the three floors of your Caravan ship for correct NPC to talk to. In such an exposure-heavy game, the lack of context for hunts is surprising. Out in the field, players face down what feels like twice as many Aragami as necessary in a lazy attempt to spread out the story beats. The story sells itself as a character-driven epic, but is without any strong characters. Every step of the way, God Eater 3 flaunts its shallow exploration of “serious” themes regarding discrimination and free-will, but uses said themes for nothing other than as a light garnish to hide the story’s glaring flaws.

A forgettable cast of characters

Players will spend the most time out in the field, exploring a couple of linear maps that are near-identical in how they’re navigated. Each map is a series of narrow paths punctuated by the odd open space. The maps lack verticality and obstacles, or anything that may be exploited when fighting Aragami. Reducing the play space to a flat arena would only improve gameplay by trimming out the chore-like traversal. Each map comes with a few options for temporal or weather conditions, but maintain the same dull, monotonous color palettes regardless. There are no captivating sights or unique colors to differentiate any area of the map from the rest. I found my eyes glued to the minimap, chasing down the red icon that denotes the Aragami, instead of at the dreadful-looking maps. Perhaps the purpose was to highlight the action in the foreground, but even then the game fails. Tall, thin, white waterfalls can often be confused for items, which are shrouded in thin, tall, white beams of light. Cold areas feature white snow and ice can make pickups equally hard to spot. Plenty of platforms that appear to be reachable are blocked by invisible walls—the maps are littered with offenses. In the Caravan, the player’s hub area, it’s the same story. Grey, metal walls surround the player and impose upon them an inescapable aura of mundanity. The symmetrical layout and reusing of assets doesn’t help exploration, nor does the absence of unique features that could have given meaning to each room.

Character creation has been overhauled, giving players the most freedom they’ve ever had. It’s still no cutting-edge system, but outfits, hair, colors, accessories, and more are available for the players’ customizing pleasure. Every God eater needs a weapon, a shield, and a gun, but while it’s a nice change of pace to be able to juggle all three, combat amounts to spamming the primary attack and taking a few ranged shot every now and again. Weapons, of which there are a wealth of types, can be equipped with three additional modifiers, with a separate modifier, called a Burst Art, for each of those three. Guns have access to a handful of element and projectile types, and a fairly robust bullet crafting system. The litany of upgrades and enhancing systems are borderline excessive, yet gameplay hardly changes at all. The deciding factor is weapon choice, but while each performs differently against Aragami, the majority of their limited movesets proves to be useless in comparison to spamming the primary attack. God Eater 3 prides itself on its nuanced progression system but forget that combat, where those tools are put to use, needs to be up to par as well. Given the speed of Aragami attacks and recovery time between each, the primary attack combo reigns supreme. In fact, each weapon has moves that go underused simply because there was never any reason to use them. It’s as if the step attacks, special transformations, and special attack were added just to be gimmicks. The Aragami’s elemental weaknesses make the attempt to encourage new builds and weapon tree exploration, but the spam-until-win strategy prevents that plan from coming into fruition. God Eater 3 has an unhealthy obsession with loading itself with more and more options, without refining what already exists.

Lots of add-ons to tweak

Once the player is satisfied with their build, they can embark on a mission to hunt down Aragami, usually one or two at a time. The time limit, another feature of little import, is overly generous, starting players off at 40 minutes, and later dropping to 20-25. Odd, given that there’s nothing to do outside of hunting the Aragami. I found the limit to be redundant since I’ve never been anywhere close to failing, even when I was performing poorly. The only mode in which time limit plays a heavy role are Assault Missions, 8-player, 5-minute raids that call for careful coordination and high damage output to down an Adaptive Aragami, the strongest of the Ashborn.  In a standard mission, squads of up to 4 players (or one player and three AI companions), spawn in, check the map, and follow the red marker until they engage the Aragami. Learning their movesets is no issue at all—each Aragami has variations of the same moves. There’s a flurry attack, dash attack, circular AoE, and projectiles. Because these similarities, it often felt like I was going up against the same few Aragami time and time again, especially given the limited number of Aragami types. It’s not uncommon to find reskins of the same Aragami, something that’s especially disappointing during Ashborn encounters. These powerhouses can devour players, just as they can devour Aragami for boosts and loot, only Ashborn will develop a more lethal version of their existing moves. The same is true for Adaptive Aragami in Assault Missions, which are normally recolors of existing Ashborn. The goal is to break as many parts (called bonds) off the Aragami as possible to reveal weak spots and obtain additional loot. Once they take too big of a beating, they’ll run off to a healing geyser somewhere on the game, but their red marker on the minimap never disappears, nor do they move particularly fast. Players will end up trailing the monster at a distance of three steps, waiting for it to reach its destination before delivering the rest of the hurt. The Aragami goes down, rinse and repeat.

Players that play with each other often will level up their bonds and unlock new Link Skills, abilities that trigger when players fight in the other’s vicinity. Each Link Skill grants a skill-specific buff, beef up the AGE unit for a short while, and give them the ability to double jump—useful for chaining together primary combos in mid-air. The ability is activated by pressing both trigger buttons, one of the more sensible examples of button mapping in God Eater 3. Other key moves are all over the place. The right bumper is associated with alternate weapons and abilities, but is also used to sprint. Interactions in the hub area are performed with X, but out in the field, the button changes to circle. Additionally, circle is also used to dodge, which makes picking up items a huge hassle. Right trigger and X execute a dash maneuver, which makes no sense at all given how other movement abilities are mapped.

There is nothing God Eater 3 does that its contemporaries don’t already do far better. Every aspect of the game is outdated, from the visuals, to the writing, to the gameplay, the game is steeped in mediocrity. On a surface level, God Eater 3 has all the trappings of a competent ARPG: a busload of features, deep customization, and flashy, skill-based combat. But underneath all that, well, there’s nothing. God Eater 3 is a shallow, 20+ hour kill quest that is the same in its first hour as it is in its last.

God Eater 3 bears a superficial resemblance to Monster Hunter, boasting many of its features, but none of its depth. It offers nothing but diluted versions of what it has tried to poach from better games.

A self-deprecating, overly sarcastic pair of glasses that occasionally possesses a human host in order to partake in the delightful process of playing video games, then immediately complaining about them. When he is not playing games (a rare occurrence), he can be found either writing about things that no one cares about, or haunting the quiet streets of his Canadian suburb.
Related Articles: God Eater 3
Share
Tweet
Share
Submit