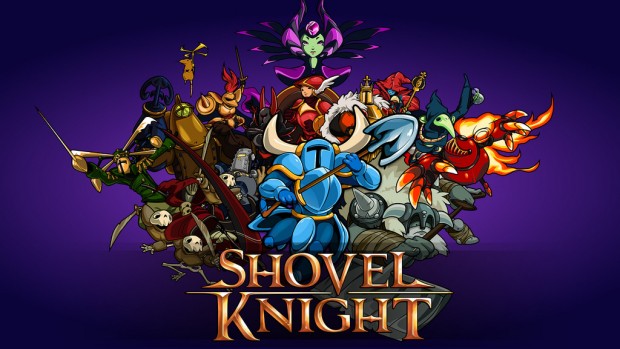 What made the games of our childhood so special to us? Was it the straightforward nature mixed with brutal difficulty? Or perhaps it was the simplistic 8-bit visuals that allowed a game’s story to play out in our imaginations? Whatever that magic formula was, 2014’s Shovel Knight nailed it, expertly revisiting some of the greatest gaming experiences of the late ‘80s and early ‘90s. Yacht Club Games managed to craft an excellent adventure that not only paid homage to the games of our past, but was still strong enough to go toe-to-toe with some of today’s best titles.

Nearly a year later, PlayStation platforms have finally been blessed with this retro revival and Sony fans can rest assured that the experience is just as fantastic this time around. Featuring the entire original game playable on PS3, PS4 and Vita along with cross-buy and cross-save support, as well as some PlayStation-exclusive content, Shovel Knight feels right at home on Sony’s platforms. It may be largely the same as the first go-around, but anyone who missed it last year owes it to themselves to play through this gem. Shovel Knight is truly special.

I won’t go into extensive detail – we’ve sung the game’s praises for the last year, even awarding it a spot on our Top 10 Games of 2014. Rather, let’s focus on what works (and occasionally doesn’t) in the transition to PlayStation.

Shovel Knight’s adventure on Sony’s platforms features an exclusive new boss fight in the form of God of War’s Kratos. After finding an extremely well-hidden secret in one of the game’s levels, players will soon find the PlayStation mascot in the form of a Wandering Traveler on the game’s world map. Finding this unlockable secret is far from easy and is unlikely to be something that is stumbled upon through natural play. Not unlike gaming’s pre-internet days, this style of hidden room is the kind of secret that would have needed to be shared on the school playground by gossiping children in the ‘90s; kudos to Yacht Club for once again going above and beyond when it comes to maintaining that retro vibe.

The fight itself, while completely optional, is quite entertaining. Much like in the God of War series, Kratos wields his Blades of Chaos and even uses a moveset reminiscent of his God-killing solo adventures. Players will dodge Kratos’ cyclone spins and grappling capabilities through three boss fight segments. The final segment, which sees Shovel Knight and Kratos battling it out on platforms that are falling from the sky, is especially fun, if only a tad easier than the first two brawls. The Kratos fight may be a one-and-done bonus fight, but it’s a fun extra nonetheless that successfully fuses the elements of both games.

Beating Kratos will also award players with the ability to forge the Armor of Chaos from the game’s armorer. When equipped, this armor set provides Shovel Knight with a slightly modified play style that feels more in line with God of War. Aside from the red and gray aesthetic, this armor gives Shovel Knight a 3-hit combo move much like Kratos himself. It also allows you to collect Chaos Orbs, which fall from defeated enemies and allow the player to store energy that can then be fired out as a powerful projectile. This armor set won’t drastically change the way that the game is played, but it’s another fun little nod to Sony’s beloved action franchise.

While most of my playtime was focused on the PlayStation 4 version of the game, players can quickly and easily migrate their game progress from one platform to another. Shovel Knight’s cross-save functionality is incredibly easy, providing players with a quick upload or download option from the cross-save menu found on the title screen. While I would play on my home console in the evenings, I would finish up each play session with a save upload, only to continue my progress on my Vita during lunch breaks, with only a few seconds of save migration each time. The process is so easy and makes switching platforms nearly seamless. This is how cross-save should always be done.

The game plays well too, no matter which PlayStation platform is your preferred choice. The game ran smoothly on both console and handheld and was a nearly flawless experience from a performance perspective. I say nearly because there were two instances that, while minor, were noticeable annoyances. The first, and least important, was a bug I ran into where prices failed to display when visiting the game’s smithy. While this is more of a nitpick, it did happen on a few separate occasions and made upgrading my equipment a tad more confusing during these times. The second involved a bizarre glitch which, when Shovel Knight fell in battle, would restart me at a checkpoint where the hero would fall right through the level, causing a loop of death and respawning. I was eventually able to break from this loop by jumping right when the game reloads, but I died several times, losing precious gold with each iteration.

These few small annoyances are nothing in the grand scheme of things though, as Shovel Knight remains one of the best action platformers in years. The retro feel is both nostalgic and charming, and the visuals are a throwback to a simpler age of gaming. The 8-bit soundtrack is chock full of awesome tunes too, and players will find themselves humming along to the game’s themes hours after shutting off their consoles. The PlayStation-specific content might be just a minor addition, and it’s hard to recommend purchasing the game again solely because of it, but the game is so good to begin with that it’s really just icing on an already delicious cake. Shovel Knight is fantastic all-around and is not a game to be missed.

Shovel Knight on PlayStation is just as spectacular as it was last year and the extra content, while minor, is a welcome addition to an already awesome game.

Gaming Trend's resident amiibo collector, Matt's a lifelong gamer with a soft spot for Nintendo. As a new father, Matt often struggles to stay as involved as he has been in years past but can always be counted on to come back for some engaging geeky conversations. A resident of Philadelphia, he is currently working on building up his Man Cave with all things Marvel, Star Wars, and Video Games. As an old-school gamer, Matt firmly stands by his belief that gameplay will always be more appealing than story.
Related Articles: Shovel Knight
Share
Tweet
Share
Submit