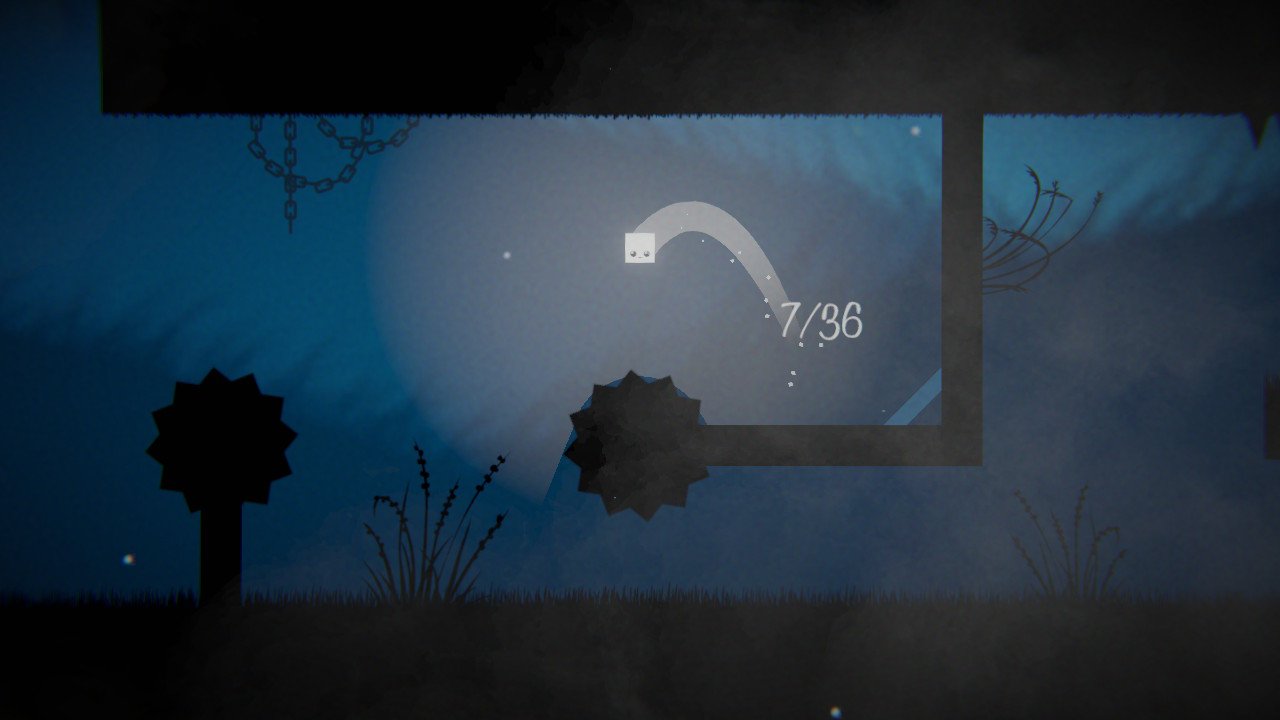 You could probably finish this game before you read the whole review!

Pop quiz: What’s the cheapest game on the Switch eShop right now? If you guessed a game that’s $4.99, you’d be wrong! 36 Fragments of Midnight retails at $2.99, and while you might be tempted to buy it due to the price alone, I would advise to skip it unless you have some leftover eShop credit burning a hole in your virtual wallet. A fully functional platformer with a couple cool ideas, 36 Fragments of Midnight unfortunately falters due to a generic presentation, some gameplay issues, and dreadfully short length.

Right off the bat, 36 Fragments of Midnight plops you into a shadowy world, where a disembodied voice implores you, a white block known as Midnight, to collect the titular 36 fragments in this place. In order to do this, you have to traverse the environment, watching out for gears and lasers; one hit from any of these things, and it’s back to the start with you. Get all 36 in one run, come back, and win. The only things you can do are move around and double jump, which are more than enough and enjoyable for this game.

If you’re thinking that’s a terse description, that’s because it is: the game is literally that short. I downloaded the game at 6:30 PM on a Saturday night, thinking I could at least play this for the weekend, and got to the end thirty minutes later. The main issue with this is that the whole game feels like a demo for something bigger: There are no menus, continues, or even background music (save for an ominous wind sound). This is a shame, since the graphics combine the creepiness of Inside with the aesthetic of Super Meat Boy. It was a pretty neat idea, but unfortunately is botched due to execution. With just one stage and background, you’ll blow through all of this in less than six minutes.

A little bit on the nose there…

Well, you theoretically could, but the way the game works is that Midnight is a one hit wonder; any collision from obstacles, be it spikes or the aforementioned gears and lasers, will cause you to get a game over screen and start back from the beginning. The game boasts a procedurally generated world that changes every time you boot it up, but it only changes the locations of the obstacles rather than the obstacles themselves. That means, once you tackle the limited variations of things in your way, you’ve experienced everything 36 Fragments of Midnight has to offer. That’s not to say that the game is broken. It’s fully functional, and had it been fleshed out, the procedural generation could have been a pretty interesting mechanic. My first few runs were met with some stupid deaths on my end, but they were more of an issue with my incompetence than the game itself. I enjoyed stepping up to the challenges that were presented, and felt accomplished after getting all the fragments and returning to the beginning.

I can imagine the speedrunning material though!

Of course, that sense of pride is washed away after I realized there’s nothing left to experience. I could’ve used another mode, another few obstacles, another… well, anything. At its current state, it feels like a demo for a platform game that could really be stellar, but right now, is barren as a plot of land after an apocalypse. There are scant few sound effects, and the lack of music makes me feel like the developers were trying to cut corners to make the price affordable. Look, I like ominous silence when it fills me with anxiousness, and I love short games when they’re fulfilling, but this does neither. When your game has less content than the Rayman Legends Definitive Edition demo (and that’s free, by the way), I start to get worried.

There’s a lot of potential with 36 Fragments of Midnight, but it’s all wasted. The procedural generation of obstacles are cool the first couple of times you play the game, but the fact that it feels empty everywhere with no replay value makes this feel like a glorified demo of something that could be greater.

Elisha Deogracias is an aspiring accountant by day, freelance writer by night. Before writing for Gaming Trend, he had a small gig on the now defunct Examiner. When not being a third wheel with his best friends on dates or yearning for some closure on Pushing Daisies, he's busy catching up on shonen manga and wacky rhythm games. Mains R.O.B. in Smash. Still doesn't know if he's a kid or a squid.
Related Articles: 36 Fragments of Midnight, Indies
Share
Tweet
Share
Submit