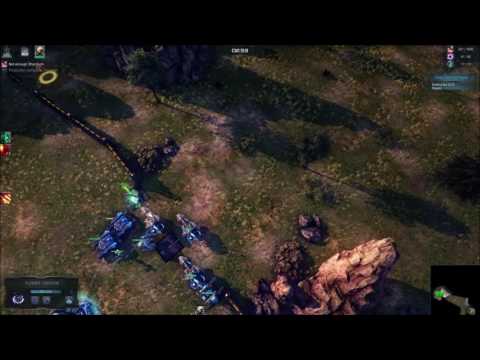 A game designed and developed entirely by one person is impressive. Considering the low price tag of $15 for Meridian: Squad 22, it does boast some fantastic visuals and sound. Maps, units, and terrain look unique and are bursting with vibrant colors. The cutscenes look incredible and the audio team that lone developer Ede Tarsoly partnered with, Hexany Audio, did a fantastic job. While the exterior may look shiny and new, the guts and mechanics aren’t anything to write home about.

The year is 3023 and Earth is in dire straits. Critically low on resources, with regular food and water shortages, it can no longer sustain the 50 billion people inhabiting it. Faced with no other option, the United Earth Council decides to colonize the distant world known as Meridian. Unfortunately for humanity, all contact with the colonists sent there has been lost. That’s where you, as the leader of an elite team known only as Squad 22, come in. You have been sent by Earth’s government to find out what happened on Meridian.

The campaign is short, with a total of nine missions, each one revealing slightly more of the sinister plot unfolding around Squad 22 and the planet Meridian. With unimpressive dialog, flat characters, and an unoriginal plot, I never felt invested in the story, which ultimately adds very little to this game. Squad missions and conquest, the two modes besides the main campaign, while adding content, don’t actually add anything to the experience, nor do they provide a reprieve from this game’s failings.

Despite being a strategy game, there is surprisingly little of it in Meridian: Squad 22. With only a handful of land, sea, and air units there’s not much room for tactical creativity. Land units can only fire linearly, making the terrain nothing more than an annoyance to be maneuvered around. Sure, air units can fly over said terrain, but they’re awfully squishy and quite expensive. To make matters worse, there’s not enough water on any of the maps to make the included naval units relevant or impactful. And, with no repair function, save your commander’s quasi-magical healing spell, everything feels even more expendable than it already is.

The tech-tree is divided into three categories: combat, economy, and defense. Upgrades can be purchased by gathering the corresponding orbs that are placed throughout maps, but the progression from one upgrade or power to another seems nonsensical.

The total number of units you can field is limited by food. The amount of food you’ve got is determined entirely by how many Shardium Mines (a fancy term for HQ) you have, which can be built only in certain places on each map near Shardium deposits. This means that constructing secondary bases allows you to train a larger force and to have greater resource generation. Matches are not won by exploiting your opponent’s weaknesses or by being a skilled tactician, but simply by whomever can throw more meat, more quickly, into the grinder. And that is where the boredom kicks in.

Unit AI is useless, further increasing the “throw everything you’ve got straight up the middle” feel of this RTS. Pathfinding has issues. Units would get stuck on obstacles or terrain. Frequently they’d block one another and then refuse to move out of the way, which becomes very frustrating in many of the game’s narrow passages, especially when under fire. The lack of any basic unit behavior functions or stances like hold fire, return fire, guard/escort, and so on is frequently annoying as well.

An admirable effort and some good looks aren’t enough to have me coming back for more. With too many problems, not enough tactical flexibility, and nothing of substance to distract from its own issues, Meridian: Squad 22 misses the mark.

Polished and pretty, the dazzling visuals and crisp sound aren’t enough to overlook Meridian: Squad 22’s many issues. This RTS is every bit as unremarkable as its story. Even at $15, this is one to skip.