In 1694, Dandara was an Afro-Brazilian warrior who fought against slavery in Palmares. Not much is known about her life, but she is described as a hero and committed suicide after being arrested. In 2020, Dandara: Trials of Fear Edition is a game inspired by her life. I think it’s important to know at least a little bit about the historical context here before jumping straight in. It’s not every day you play a game inspired or based on real events, and one of the game’s main themes and something it tells you every time you start it up is that “Dandara’s actions will not be forgotten.”

In Dandara: Trials of Fear Edition, you are the titular Dandara; a woman from the void of creation whose purpose is to free the Salt from the tyranny of the empire. The Salt is a very mysterious and vague world where you’ll meet strange characters such as an artist giant, a bird woman, and… Johnny B. Goode. Your method of exploring this world is extremely unique, Dandara can only stand on salt, so you’ll jump from wall to wall, floor to ceiling as you fight enemies, find secrets, and gain new abilities. It’s not often that a game makes the simple act of movement fun, but Dandara succeeds with flying colors. Literally, she has a big yellow scarf that flies behind her when she jumps, which just looks cool. This system of movement alone makes the game worth playing, it feels exhilarating to know exactly where you’re going and trying to get there in the quickest, most efficient way possible. 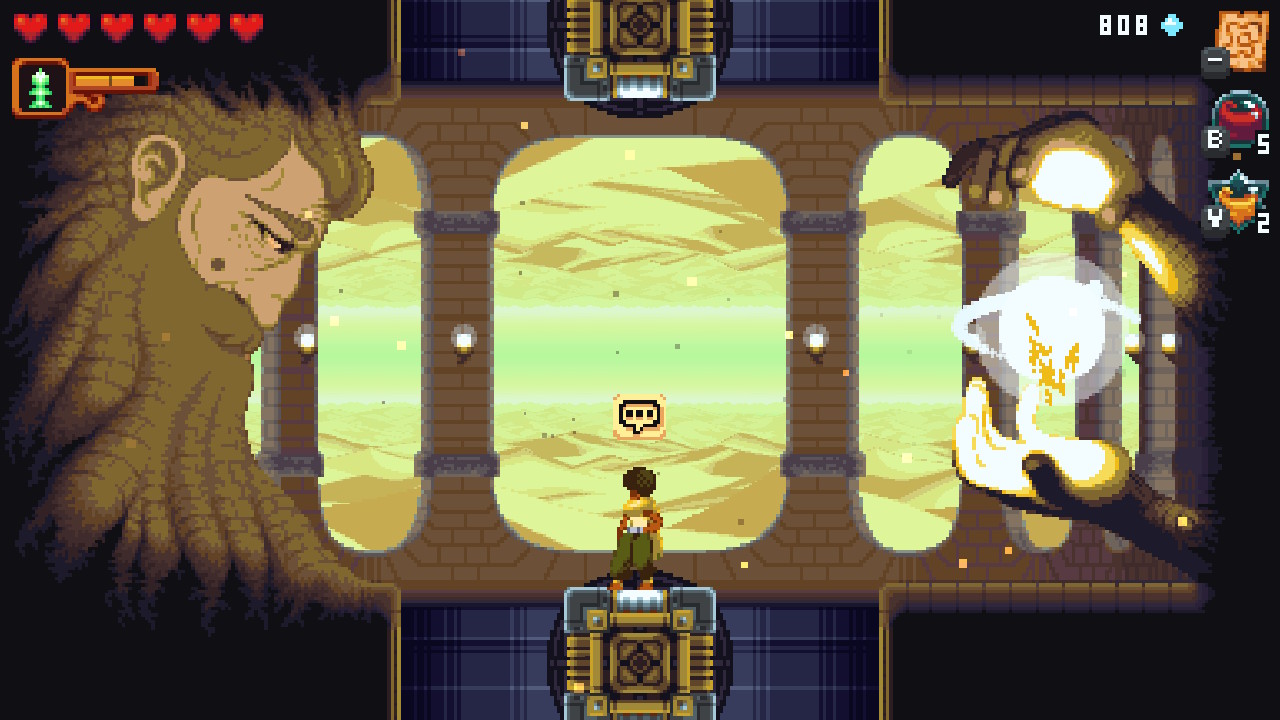 That unique movement system is, thankfully, held up by an intricately designed world that you’ll want to explore every inch of. It’s a highlight when you need to figure out how exactly to jump where you want to go. I would have appreciated a few more of these movement puzzles as they’re few and far between. When you’re not jumping around exploring, you’ll be jumping around fighting gravity-defying enemies. This is where Dandara falls short. While movement is fast and fluid, the game will often expect you to be inhumanly precise. Later on in the adventure, the screen will be filled with projectiles and, if you’re not standing in the exact right spot, you’re going to take damage. To move and shoot, you’ll use the left stick to point in a direction then A or X to jump or begin charging a shot respectively. Since you often want to move quickly through areas, the game will help with targeting the next salty surface to soar to. This creates a big problem in combat as I often found myself wanting to jump somewhere pixel perfect only to end up missing my target and right in front of enemy fire. In addition, the game is nauseatingly difficult. The new, secret final boss added to the Trials of Fear edition took me over an hour of trying to beat it, though for the record, I did eventually defeat it.

While combat against hordes of regular enemies may be excruciatingly difficult (the other new boss just isn’t fun for this reason), the four or so big bosses are largely (pun intended) enjoyable. Especially the heart boss that takes place in a circular arena. These fights, for the most part, reach a good balance of difficulty; you’ll still die a ton, but it feels at least possible to beat them. 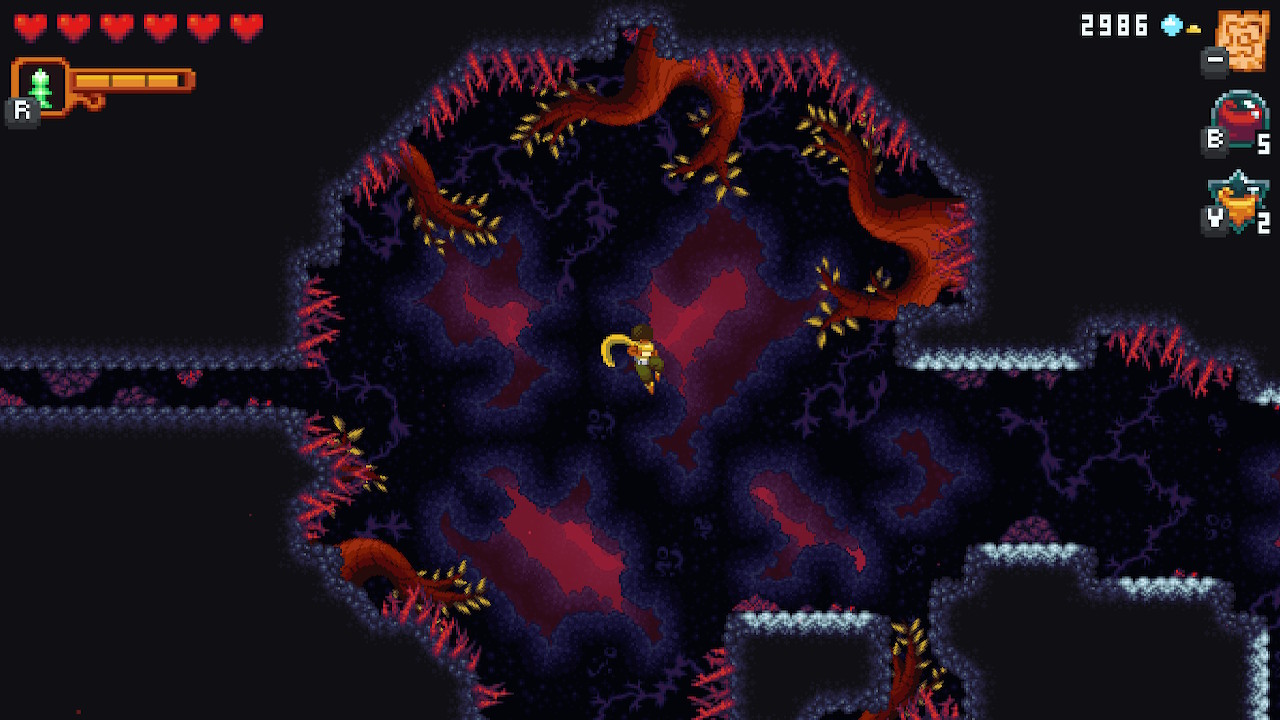 What makes every encounter more bearable, however, is the amazing soundtrack. If you’ve read any of my reviews before, you know that I love music. That being said, I implore you to seek out Dandara’s OST immediately. Right now. Here’s a link. Unfortunately, listening on YouTube can’t convey how each song will change and evolve as you explore and fight, my favorite detail being how the piano in the boss music will stand out more and more as you inch closer to victory. I don’t think I’ve heard a game soundtrack this good and unique since Final Fantasy Crystal Chronicles on the Gamecube.

If you’re intimidated by the difficulty, there are few accessibility options to make your journey a bit easier. You can add more checkpoint flags to the game, gain unlimited stamina, or the ability to revive in the same room you died. I didn’t use any of these on my playthrough out of a stubborn sense of pride, but I don’t think these options will help much with players struggling in combat. It could use some more extreme options such as controlling the game’s speed or even invincibility. As it stands, people who just want to experience the strange world and story will find a myriad of obstacles standing in their path. 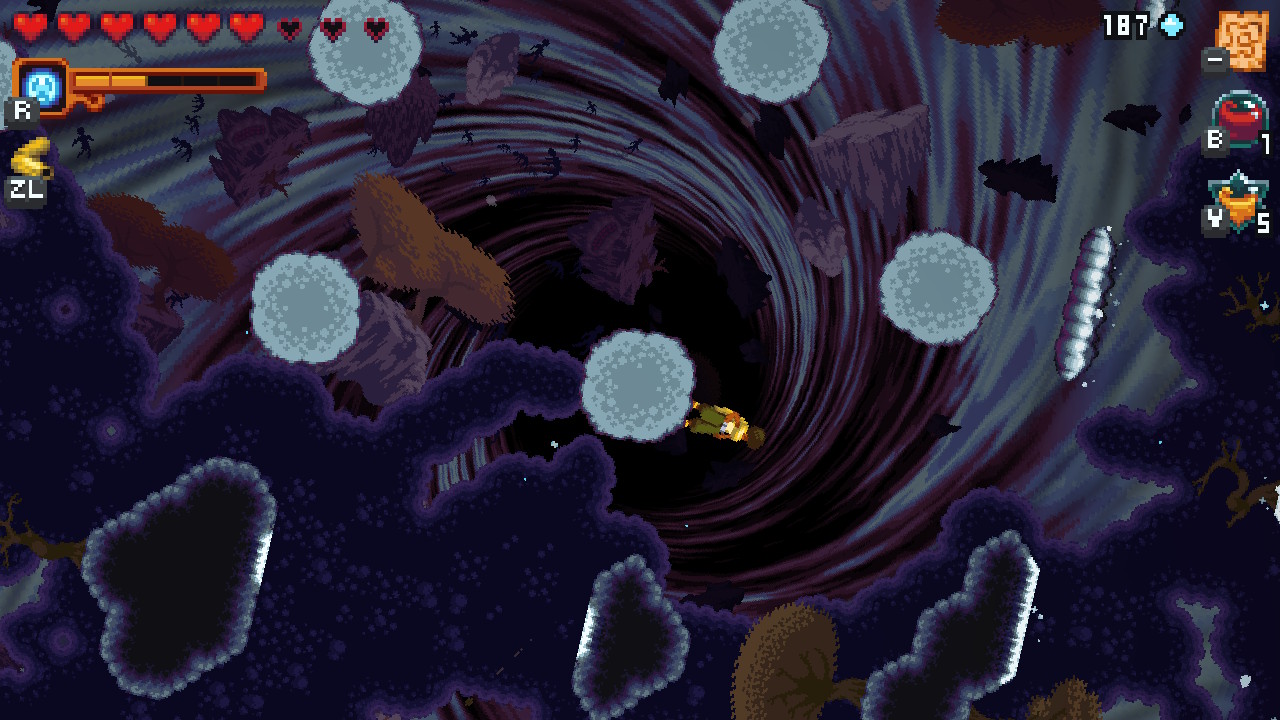 As you discover more of the Salt, you’ll come across new abilities to help in combat and further exploration. For example, early on you’ll acquire Johnny B. Missiles which allow you to destroy certain walls. While not all of these abilities are useful in combat, they all have their uses in puzzles. As you explore, you’ll come across camps and flags which serve as checkpoints. You can rest at camps to spend salt received from defeating enemies and upgrade Dandara’s abilities like health and stamina. When you inevitably die, you’ll leave behind your soul and all the salt you’ve acquired in the place you perished. I know every journalist uses this comparison, but please bear with me when I say that if you want to get your stuff back, you’ll have to return to where you died in a Dark Souls-like fashion. This mechanic does bring something new narratively, when collecting a soul you’ll see the name of whoever died and their cause of death. In your case, it will always say Dandara, grave wounds, but you can find various NPC’s souls around too. Their causes of death may not always be what you expect, for example the most interesting one I found only says “inspired by a yellow scarf.”

Dandara is an excellent game and I can’t believe I haven’t heard people talking about it. Its unique movement is accompanied by an equally unique world, soundtrack, and symbolic story that will fascinate lore nerds. While it’s controls may not support the precision combat asks of you, the Salt is definitely a world worth saving.

David is the kind of person to wear his heart on his sleeve. He can find positives in anything, like this is a person who loved Star Fox Zero to death. You’ll see him playing all kinds of games: AAAs, Indies, game jam games, games of all genres, and writing about them! Here. On this website. When not writing or playing games, you can find David making music, games, or enjoying a good book. David’s favorite games include NieR: Automata, Mother 3, and Gravity Rush.
Related Articles: Dandara, Dandara: Trials of Fear Edition, Indies
Share
Tweet
Share
Submit