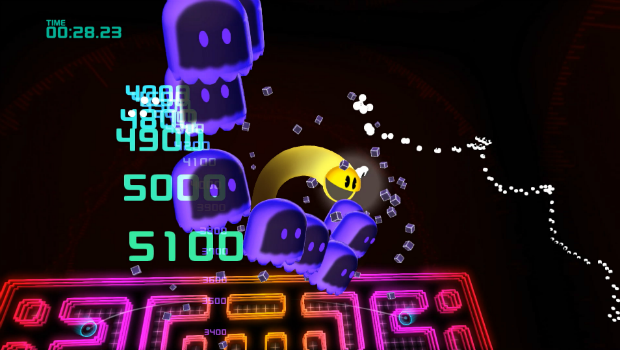 So, if I’m to believe the ethos of Pac World, then normal old me with bad knees and slow, slow movements would end up doing the standard fare pac-man mazes, getting chased by ghosts and having little Pac babies and just living the normal, Pacmerican dream. The Odell Beckham Jrs, LeBron Jameses, and Usain Bolts of the world would be above us all, in the Pac-Man Championship Edition.

Fast paced, puzzling, and surprisingly fresh, Pac-Man Championship Edition 2 continues where the original left off. Full of fresh and new gameplay styles that will challenge even a Pac-Pro, Pac-Man CE 2 is a fun and casual way to revisit the glory days of gaming past while retaining a modern edge.

Pac-Man CE 2 replaces the old “eat dots, next level” dynamic of Pac-Man games with a “quickly eat some dots, next level” dynamic that is familiar, but much faster paced and more exciting.  Maps are smaller, and in the early stages of the game you only deal with a single ghost. You begin and finish each map in the same center position, and the goal is to find a singular path across the entire map back to the starting point.

For all the subtle changes, this part of the game is still largely the same. The chase dynamic is played down in favor of a defense dynamic, but other than than it does still feel largely like playing classic Pac-Man titles, which is fine. It is a good thing that I don’t feel like I’m playing something entirely different. However, it can get boring after a few times through, given I’ve just played so much Pac-Man over the years.

The real change is in the ghosts, with the dynamic I mentioned above. In the past, of course, ghosts chased you (for the most part) and you had to avoid them at all costs. Pac-Man CE 2’s ghosts don’t automatically kill you when you touch them. Rather, you have to kind of slam into the ghost repeatedly to get it angry, causing it to launch itself to a random spot on the map, where it begins chasing you.

As you move through the map, you collect miniature ghosts, which once “awake,” form a tail on the backend of the ghost. This is what causes the defense dynamic, as the further along that trail goes, the more likely you’ll be blocked from certain sections without angering the ghost. Once you move to levels which have multiple ghosts on the map, this challenge is amplified 4-fold.

The game has two primary modes. The first is a puzzle mode that has different styles and difficulties with five primary puzzle types. This mode utilizes tunnels, jumps, highways, and pattern designs to set up a gauntlet style challenge where the maps come one after another. This mode is timed, and once the timer runs out, it’s game over. Your score determines a letter grade, which will unlock new game modes and other features.

The second mode is an adventure mode that has you completing specific objectives, and is much more of a challenge than the puzzle mode. You will do tasks such as eating a certain number of fruit, ghosts, or collecting a number of points for each stage to proceed.

The overall look and feel of the game is a positive in my book, with a dancefloor aesthetic that keeps the adrenaline high and fits the pace perfectly. The soundtrack is a fairly generic electronica mix, but there is nothing to complain about there.  The colors and the lights are crisp and pretty in the backgrounds, and a nice selection of graphic styles for the characters, backgrounds, and maps means you can pick and choose the look you like most.

In the end, the game is an acceptable entrant into the Pac-Man universe, and holds a lot of potential for fun and amusement. There isn’t a whole lot to hate about the game, it does a fairly good job at meeting, but not exceeding expectations throughout. Not mediocre, I’d say, but Pac-Man Championship Edition 2 is perhaps just one or two tokes over that line towards a solid experience.

Pac-Man Championship Edition 2 is a faster, more frantic, and fresh take on the old Pac-Man series, and this sequel does a great job of furthering what the original Championship Edition presented. The game is fun, and Pac-Man fans will enjoy the game while also getting a new set of challenges to face. In the end, the game is fairly simple and something you’ve seen before many times, but if you are craving a return to Pac World, this is a great place to look.

Patrick Rost has been with Gaming Trend since 2013. At first focused on sports coverage, Patrick has gone on to cover a wide range of games and other products for the website. Outside of Gaming Trend, Patrick writes and records music, grinds perpetually in Elder Scrolls Online (PS4), and lives day to day with his two dogs, Bob and Stella.
Related Articles: Pac-Man Championship Edition 2
Share
Tweet
Share
Submit