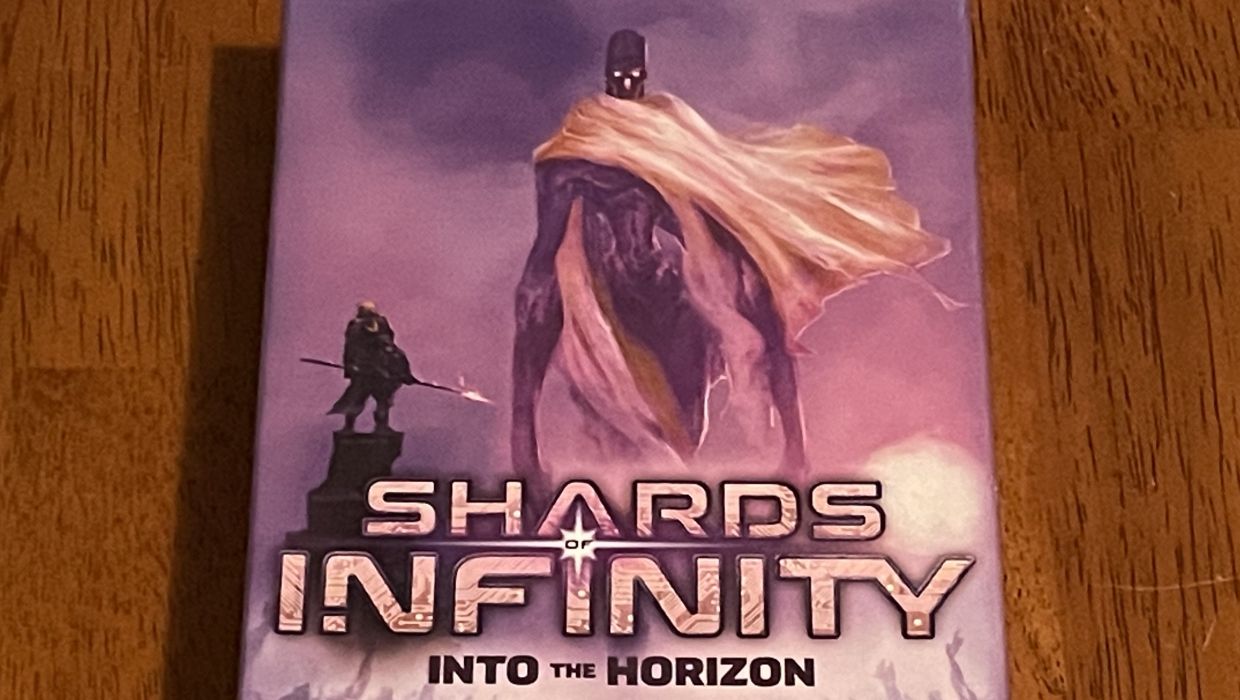 When first looking at Shards of Infinity you might believe that it is a sci-fi reskin of Ascension. A couple of elements of Ascension are used in Shards of Infinity, like the center row, four factions, and champions that act similarly to constructs. Once you dig a little further you’ll find several differences.

First, you get a character card that tracks your health and mastery. Instead of attacking creatures in the center row, you attack your fellow players. After playing and purchasing your cards, you enter the attack phase. The amount of power you gained during your turn determines how much damage you can split across your opponents. When your health is at zero you are out of the game. Mastery gives some cards upgrades. If your mastery is high enough, you can play one card and win the game.

Shards of Infinity has a special kind of ally called mercenaries. Most ally cards you purchase will go to your discard pile. Mercenaries can do this as well, but you also have the option to fast play the mercenary card to get the benefits of that card on that turn. Once your turn is over, instead of going to your discard pile, the mercenary goes to the bottom of the center deck most likely never to be seen again. It’s a great mechanic when you see a card and you need its abilities at the end of the game. At the beginning and middle of the game you might weigh how useful it is now versus how useful it will be the rest of the game. 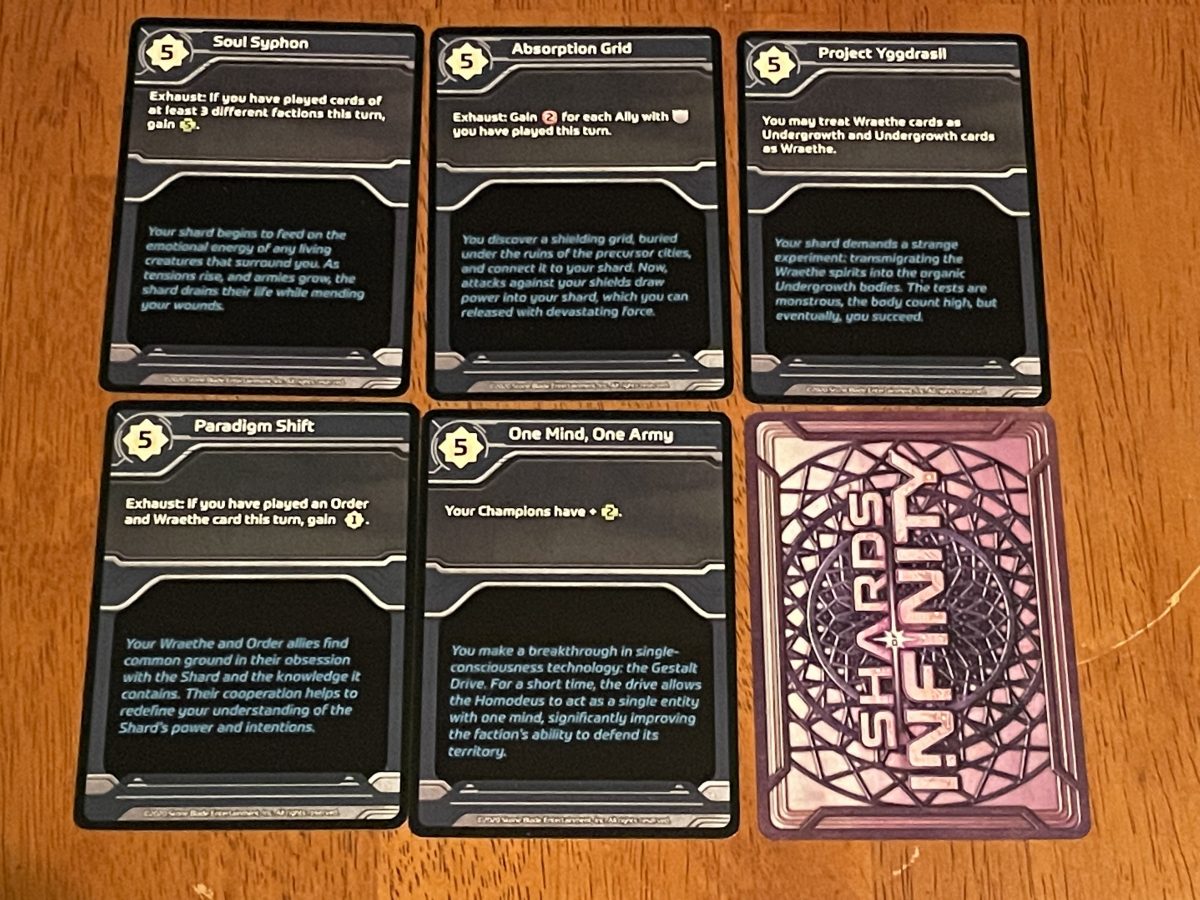 Shards of Infinity has seen three expansions come out with the latest being Into the Horizon. While the expansion only contains 60 cards, it packs two unique mechanics with it.

When looking at the included cards, you’ll see that half of them have the normal Shards of Infinity back, while the other half of the cards have purple backs. These cards are destiny cards and they don’t get shuffled into the center deck. Instead, these 30 cards get shuffled together and six are laid out in their own destiny row. Once you reach five mastery you can take one destiny card, and that’s the only one you can take during the entire game. These cards can be very powerful, from granting shields to allies, causing all other players to lose health, drawing an extra card each turn, and gaining extra power to attack your opponents with. The destiny row doesn’t get refilled when someone takes a card from there like the center row, so you’ll want to be quick to get to five mastery if there’s a particular destiny card you want to get. You have to be careful that someone else doesn’t get it first. It will take a long time to get through all of them though because there are so many. It would be nice though if there was card art on the destiny cards to differentiate them more. 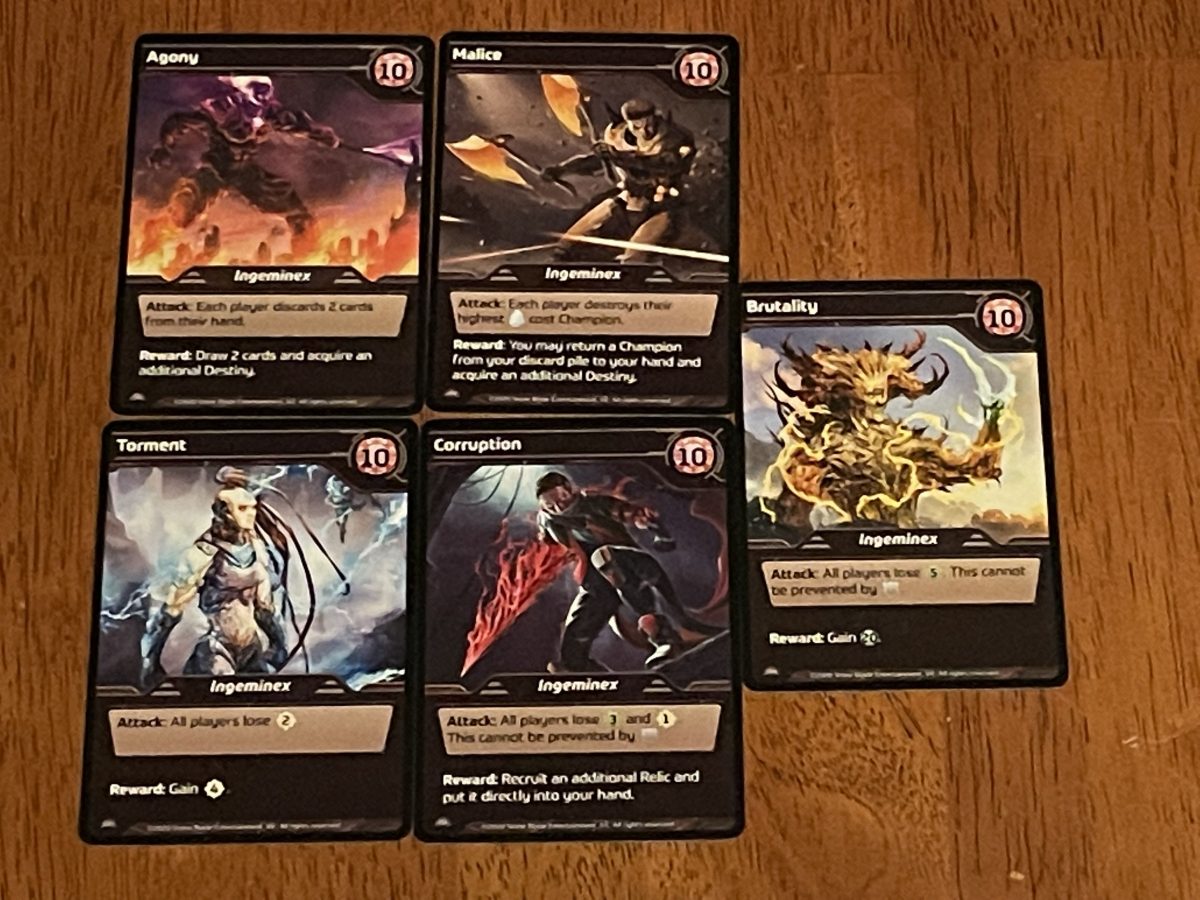 The other cards feature allies and champions for the factions, but there’s one other new card type, the Ingeminex. These cards go into the center deck and can pop up any time the center row is being replenished. Instead of going to the center row, they get placed in a separate area and another card is drawn for the center row. The Ingeminex are powerful cards that affect everyone equally. They can cause losing health or mastery, discarding cards from your hand, or putting your highest cost champion into your discard pile. Since these take effect every turn, you could end up with much less health or cards in your hand before you can try to defeat the Ingeminex. You might not want to because it is causing your enemies harm that you can get through. However, the reward for defeating an Ingeminex can include a second destiny card which can be game changing, so you’ll probably want to take care of the Ingeminex sooner rather than later.

One of the biggest issues with an expansion like this is how diluted the center deck can be. Since only 30 cards at most will be added to the center deck it isn’t as bad as it could be. There are only four Ingeminex cards added to the deck, plus an additional one if you are using the Relics of the Future expansion. You could possibly see all four or five in one game, but it’s also possible none of them occur as well. I do wish that there were more Ingeminex cards though. It could have provided more variety when they showed up, but I wouldn’t have minded them showing up more often. They provided a sense of dread and excitement when one was flipped over.

Into the Horizon does a lot with sixty cards. The Ingeminex and destiny cards pack a punch, but the dilution of the center deck is mitigated due to only half the cards going into the center deck. If you like expansions that provide more of the same, you'll want to skip this. However, if you have been playing Shards of Infinity for a while and you need to shake things up, then you'll want to look at Into the Horizon.

While not working as a Database Administrator, Keith Schleicher has been associated with Gaming Trend since 2003. While his love of video games started with the Telestar Alpha (a pong console with four different games), he trule started playing video games when he received the ill-fated TI-99/4A. While the Speech Synthesizer seemed to be the height of gaming, eventually a 286 AT computer running at 8/12 Hz and a CGA monitor would be his outlet for a while. Eventually he’d graduate to 386, 486, Pentium, and Athlon systems, building some of those systems while doing some hardware reviews and attending Comdex. With the release of the Dreamcast that started his conversion to the console world. Since then he has acquired an NES, SNES, PS2, PS3, PSP, GBA-SP, DS, Xbox, Xbox 360, Xbox One S, Gamecube, Wii, Switch, and Oculus Quest 2. While not playing video games he enjoys bowling, reading, playing board games, listening to music, and watching movies and TV. He originally hails from Wisconsin but is now living in Michigan with his wife and sons.
Related Articles: Shards of Infinity, Shards of Infinity Into the Horizon, Tabletop
Share
Tweet
Share
Submit