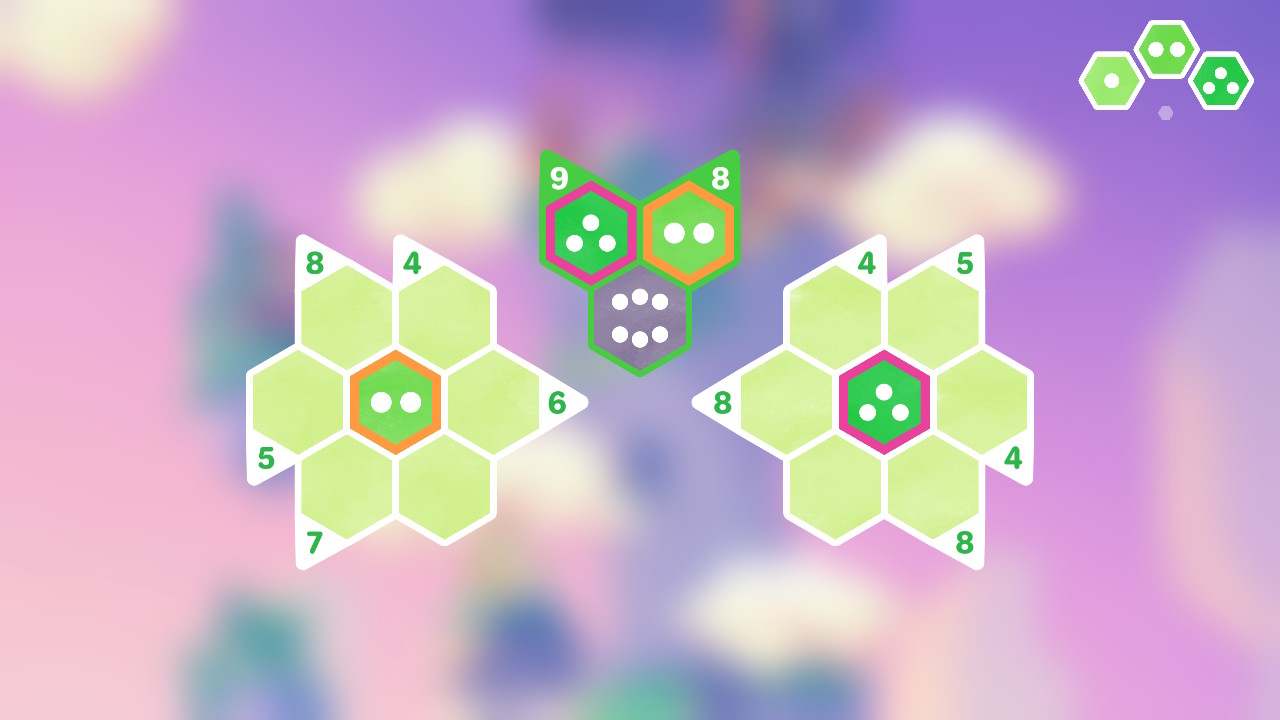 Sudoku and similar puzzle games have been very popular, especially among those who enjoy challenging their brain. Unlike many challenging games, the aforementioned experiences are designed to be relaxing. Hexologic falls into this category, and accomplishes its task well.

Hexologic involves hexagons that are connected to one another in a variety of ways. On one or more of the sides of certain hexagons, numbers are attached to the sides. These numbers indicate the total that the line of hexagons leading up to that number have to add up to. For example, if you have three hexagons side to side, with a seven on the rightmost end, then the numbers need to add up to seven. None of the hexagons can be empty, so careful planning is required.

Now, the idea of getting the numbers to add up might sound easy at first, but you have limited numbers to work with. You click on the hexagons to change the numbers within them, and each hexagon can contain only one, two, or three. The numbers are represented by dots, which helps keep the screen from getting cluttered up by numbers. At the same time, this means you have to count the dots yourself, which admittedly isn’t hard. In later levels it can be a bit more difficult, but it doesn’t go into really high totals, so don’t worry about losing track.

As you progress through levels, you’ll be introduced to more mechanics to take into account. The first of these additions is the inclusion of greyed out hexagons. These hexagons have a predetermined number of dots in them, and cannot be changed. As a result, you are tasked with working around them and making them fit into your goals. The other unique aspect of them is that the number of dots they contain is usually four or more. It’s a nice change to see hexagons with more than three dots sometimes, even if you can’t do anything about them.

Another new mechanic is the inclusion of color rimmed hexagons. Any color you see will have one or more just like it somewhere else on the screen. This is because they’re connected; in other words, changing one of them changes all of them. So if you make one of the blues a two, then every blue becomes a two. You will also encounter different colors in each level at the same time, causing you to pay attention to how they affect each other. Honestly, this idea of connected spaces was my favorite feature to discover. Not only did it add more obstacles to overcome, and cause me to plan more carefully, but the extra colors added to the atmosphere of the game.

Speaking of atmosphere, Hexologic does an amazing job at helping the player relax and stay calm as they play. The music feels as if you’re listening to a setting on a white noise machine, which fits the tone of the game perfectly. The background of the levels changes as you progress through the game, starting out underwater in the early levels, and eventually reaching high into the sky. When you start a level, it pops up on your screen right there while the background becomes blurry. It’s pretty seamless, and the colors of the world behind the hexagons adds more charm, beauty, and serenity to the gameplay. All around, you can clearly see how much effort was put into making Hexologic as tranquil and peaceful as it could be.

The one downside to Hexologic is that it doesn’t take very long to complete. The game features 60 levels in it’s main “story” so to speak, with around 15 extra levels you can unlock while playing. The extra levels are contained within yellow hexagons placed in the background at certain locations. If you aren’t aware of what they are, then you could easily overlook them at first, just as I did. After I beat the main 60 levels, I scrolled down and happened to notice the first yellow hexagon. I was curious what it was for, and upon clicking on it I realized that it was a path to three bonus levels. That prompted me to scan the rest of the map for more bonus levels, and I found four more sets. That being said, completing every level still took me less than two hours. That doesn’t mean it wasn’t worth the time, in fact it was, but I wish there was more to play through because it was so enjoyable.

In the end, Hexologic is a relatively short but sweet puzzle game. It isn’t the most challenging, but it still offers a chance to give your brain some exercise. Along with that exercise you’ll be treated to soothing sounds and charming background scenes. You won’t be rushed with time limits or bogged down by failed attempts like in other games. You get to play at your own pace and enjoy what Hexologic has to offer. For that small $2.99 price tag, I’d say it’s worth an hour or two of your time.

Hexologic is a charming number puzzle game that gets some influence from games like Sudoku. It's not very long or challenging, but it offers a casually relaxing sort of difficulty. The sights and sounds are clearly meant to invoke tranquility, which adds to the peaceful atmosphere and gameplay.

Codi loves to play video games and watch movies. He will watch almost any kind of movie just to experience them. His ideas take inspiration from the shows and movies he watches, and games he plays. He also loves a good pun.
Related Articles: Hexologic
Share
Tweet
Share
Submit