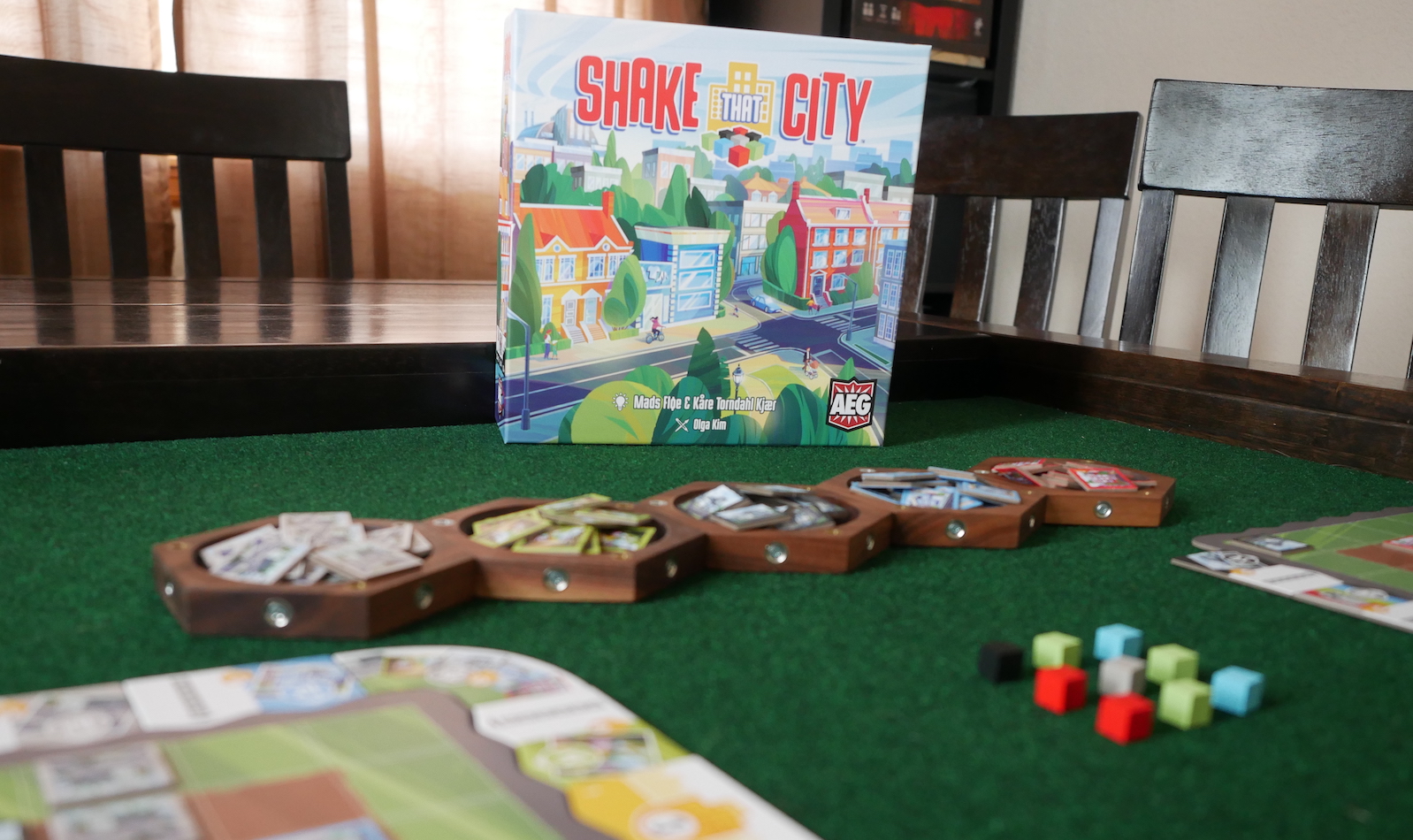 Editor’s note: We get a lot of prototype games at Gaming Trend, in various states of completion, and usually we have a very strict rule when it comes to covering them: Evaluations of product in an unfinished state are previews, reviews are reserved for what you would find on the shelf. Then this lovely prototype of Shake That City arrived, and other than a small yet meaningful typo and having to download the rules from the web, the production quality rivals and even in some cases exceeds numerous final versions of other games we have played. This is an almost fully baked game, and any adjustments made during the mass production process are likely to be negligible (except the typo). It is for this reason why we have made the rare and unprecedented decision to give the provided copy of Shake That City a full review. 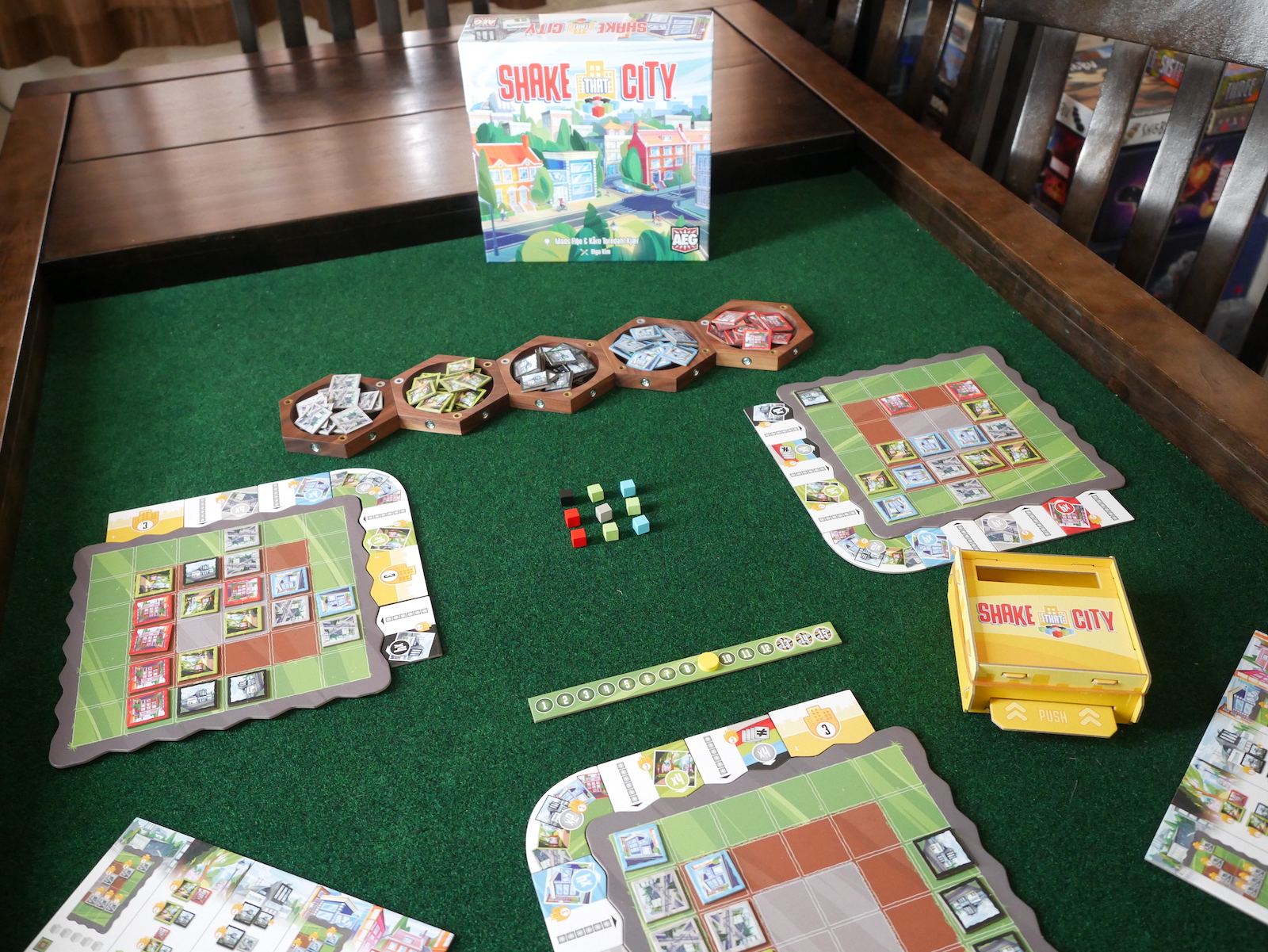 It’s pretty remarkable how many tile placement city-building games there are on the market; it’s arguably one of the most common types of tabletop games out there, and a game designer would be hard pressed to say something new in this space. That’s not to say that it’s a tired genre, just that it can feel as if we’ve been there, done that, and it’s hard not to be derivative of what’s come before. Shake That City takes a fairly lightweight approach towards the theme and centers the gameplay around a cardboard box full of colored cubes that at first seems like a gimmick, but quickly proves to be a solid foundational mechanic of the game. 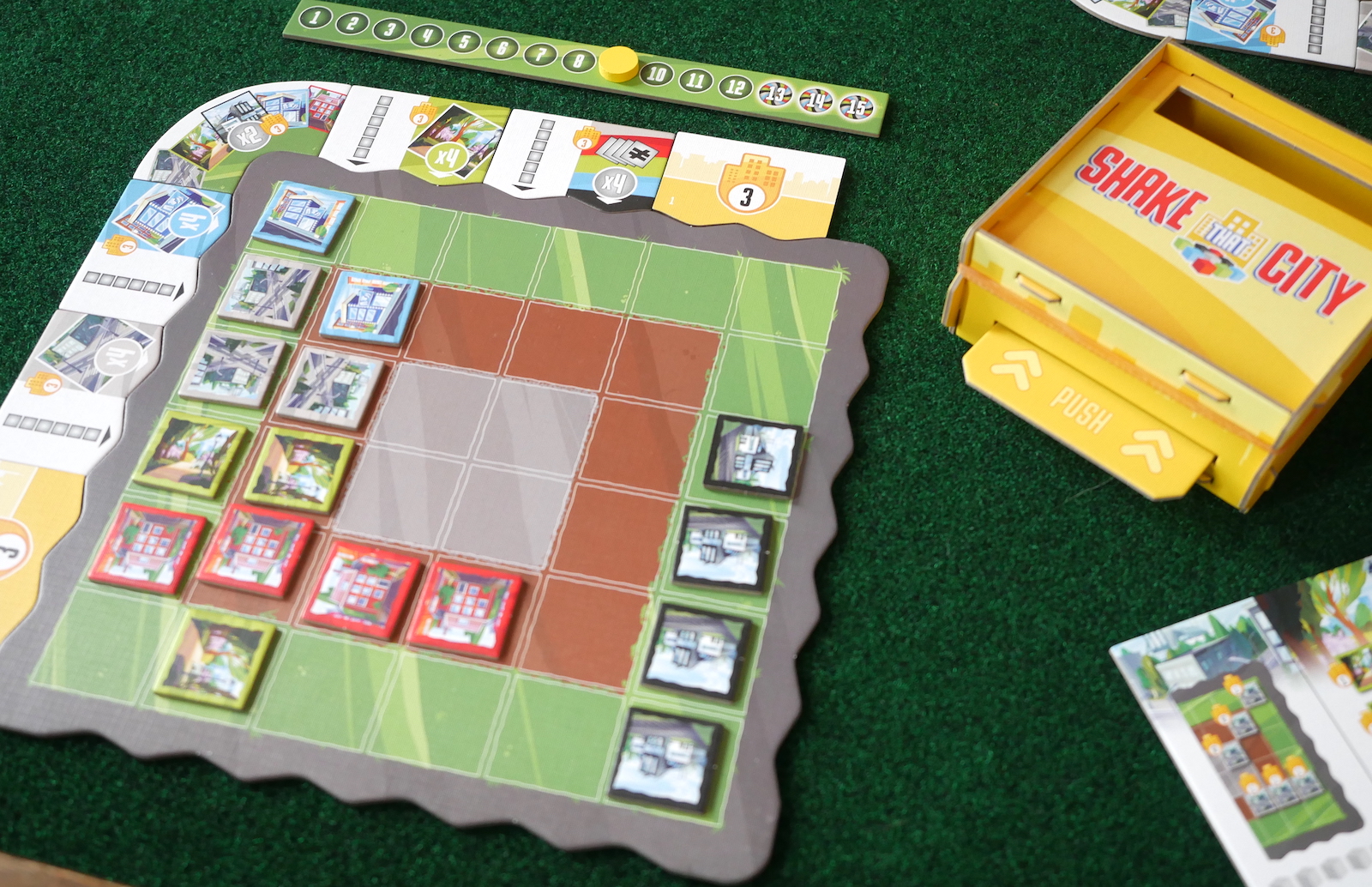 Shake That City is a light and family friendly tile-laying puzzle game for 2-4 players that generally takes 30-45 minutes to play. Each player is given a board that represents a gridded city block, and over the course of 15 very quick rounds place colored tiles according to a 3×3 grid of colored cubes that get randomly sorted via a wonderful little cardboard box held together by two rubber bands. At the end of the game, each tile scores according to the tile types surrounding it, as well as scoring rows and columns according to bonus tiles that line up on the top and left of the player’s game board. Players are largely on their own, taking turns shaking the box and depositing a tidy little grid of nine cubes in the middle of the table, with the only real point of interaction being that they get their choice of which color to place, which prevents the other players from using that color this turn (at least until the last three rounds, which lifts the restriction for all). 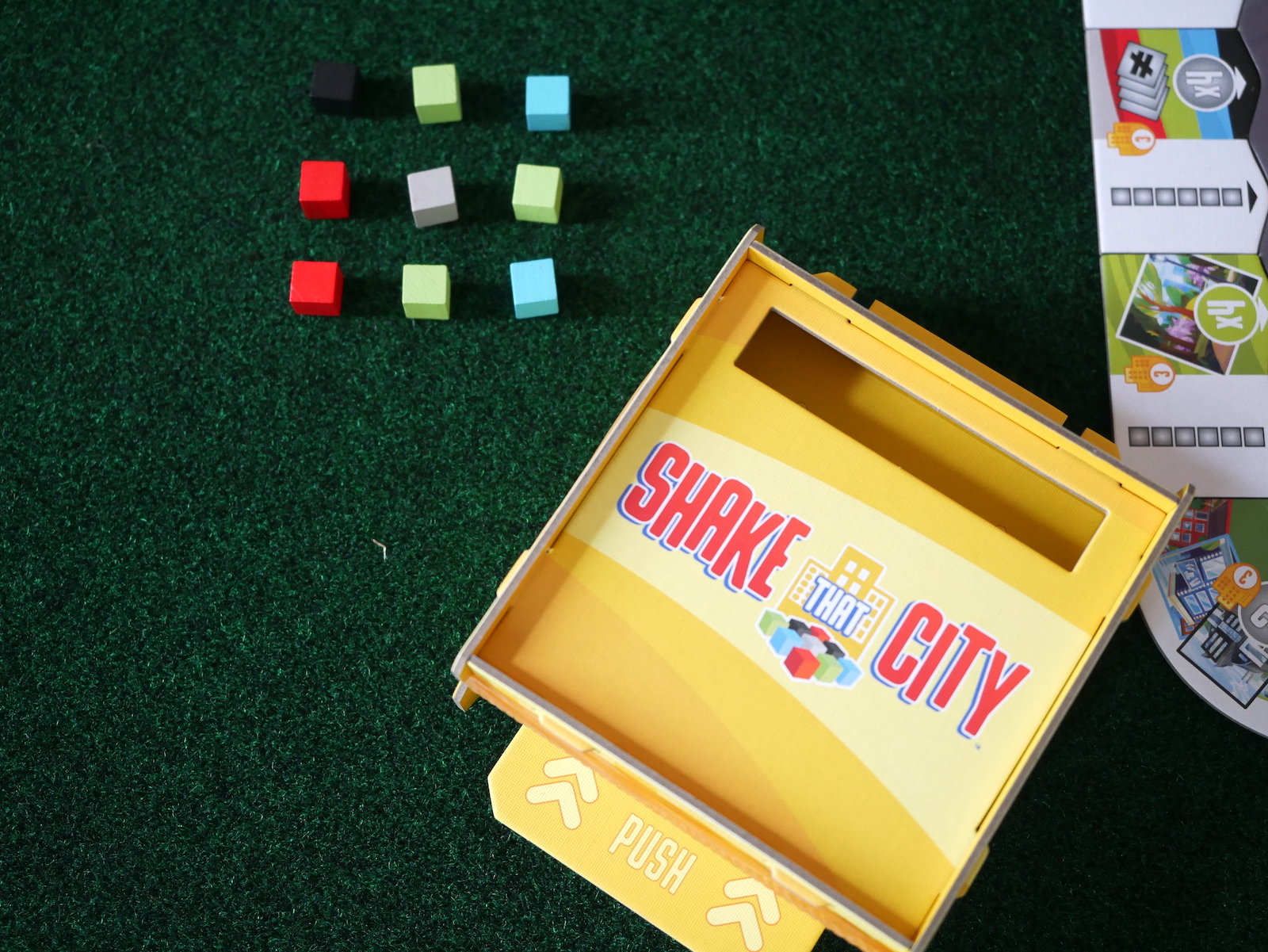 This shaker box and the cubes it spits out are the focal point of Shake That City, and the position of each player around the center determines the orientation of how tiles can be placed. Each player chooses the color cubes from the grid they are using on the turn (with the active player, once again, getting the sole use of the color they choose), and then they place the matching color tiles anywhere on their board in the same relative position in the cube grid according to how they are facing it. If a tile cannot be placed on the board in the identical configuration as the cubes, the player cannot use that color and must choose another. Play continues this way until rounds thirteen through fifteen during which all players can select the color of their choice regardless of which color the active player chooses. The game then ends, points are tallied up, and the highest score wins. 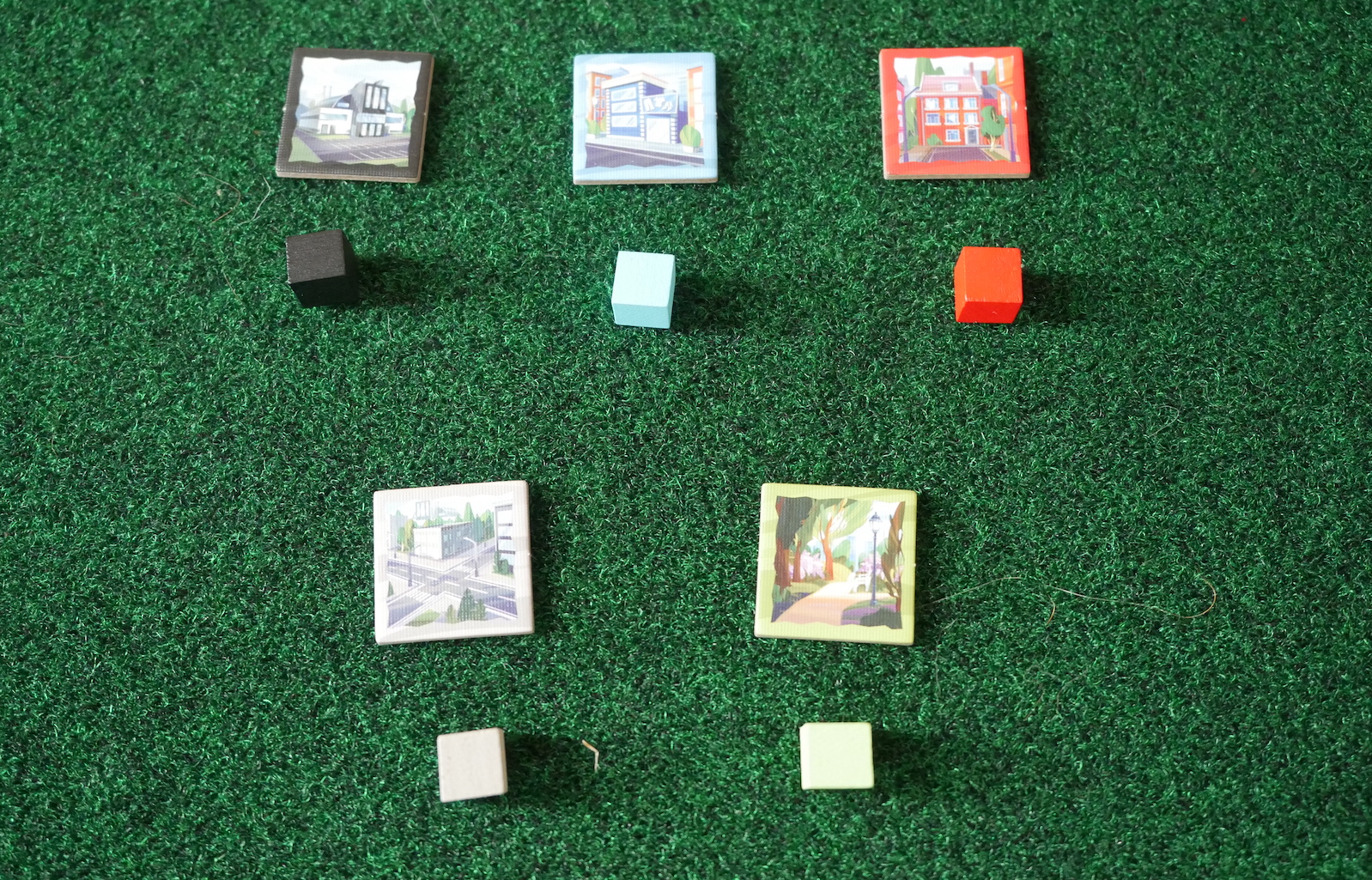 Shake That City is not a complex game, but the shaker box and how the cubes are used according to the player’s perspective adds a surprising amount of variability. The randomness this creates does hamper anything but the lightest of strategizing, however. Black cubes/tiles are factories, which score points when placed adjacent to other factories or roads (gray). Green cubes/tiles are parks, which score only if adjacent to factories (black) or houses (red). Red tiles are houses, which score 1 point for each grouping, regardless of size, and zero points when adjacent to factories (black). Blue tiles are shops, which score more points depending on which zone of the board they are in (green=1 point, brown=2 points, gray=3 points), but only if they are adjacent to one or more road (gray) tiles that connect to the edge of the board. Finally, roads (gray), which each count for a point if the group is connected to the edge of the board. Combine this with the random placement of bonus tiles along the edge of the board that can be fulfilled by either placing 4 tiles in the row or column according to the color or combination presented, or by filling the adjacent row or column completely with tiles. The corner bonus tile gives three bonus points for having one of each tile on the board, which we found was almost impossible not to get every game. Again, this provides a lot of variability but the randomness can stifle strategy in some cases. 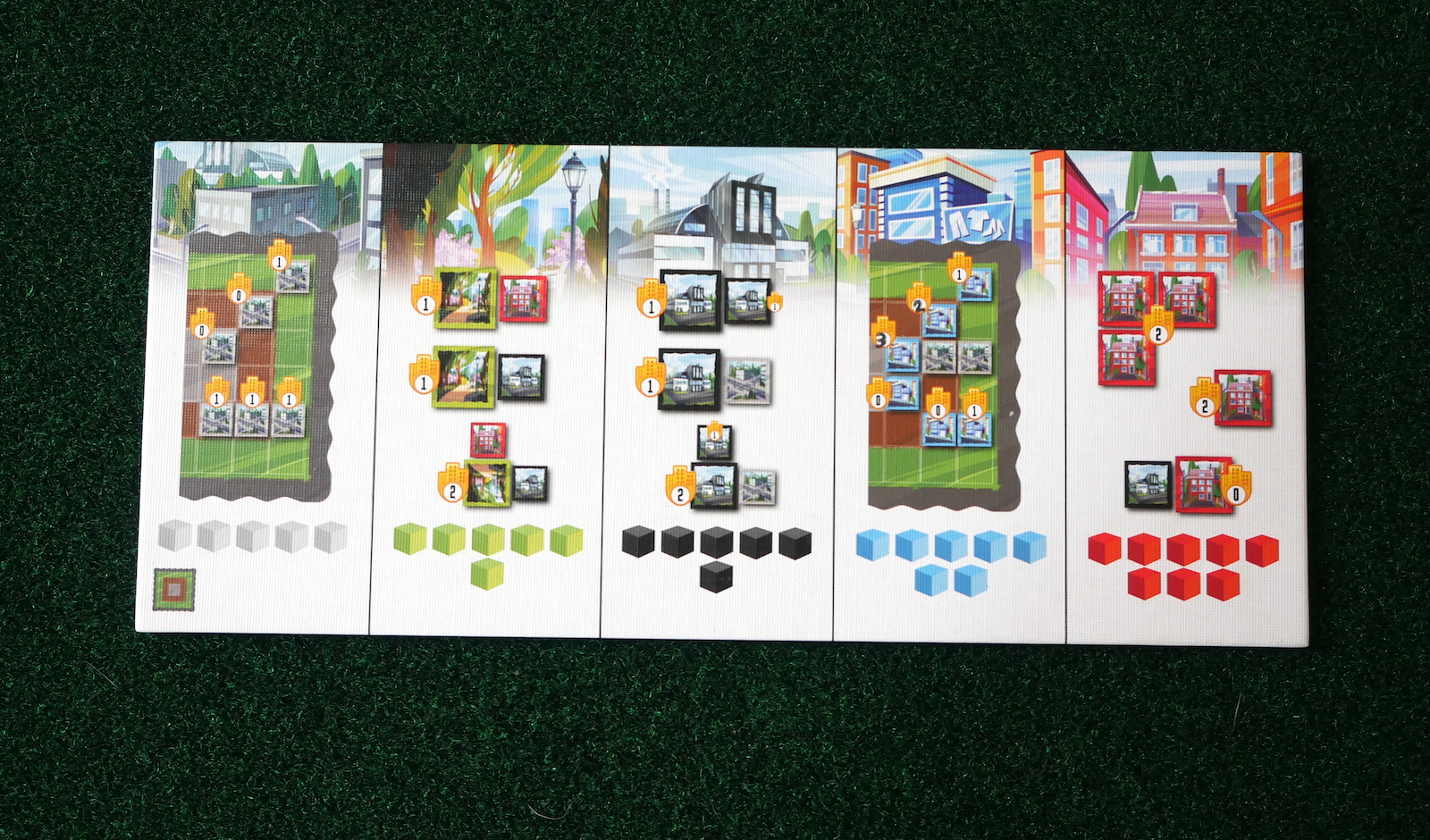 After several games and several attempts at different tactics, no one approach appeared to work significantly better than others, however the most contentious color players tended to choose was the gray cubes- roads. While every other type of tile can work to some extent no matter where they are placed on the board, roads are the key to racking up higher score totals as they are crucial for adjacent blue tiles the further towards the center they are placed, and they have to be connected to the edge to count at all. Compound that with the fact that the color with the least amount of cubes in the shaker box is- you guessed it- gray. Often only one gray cube is dispensed from the box, and active players who knew almost always chose that color as the one only they can use on their turn. After all, what good is a city block full of buildings if there are no roads leading to them? 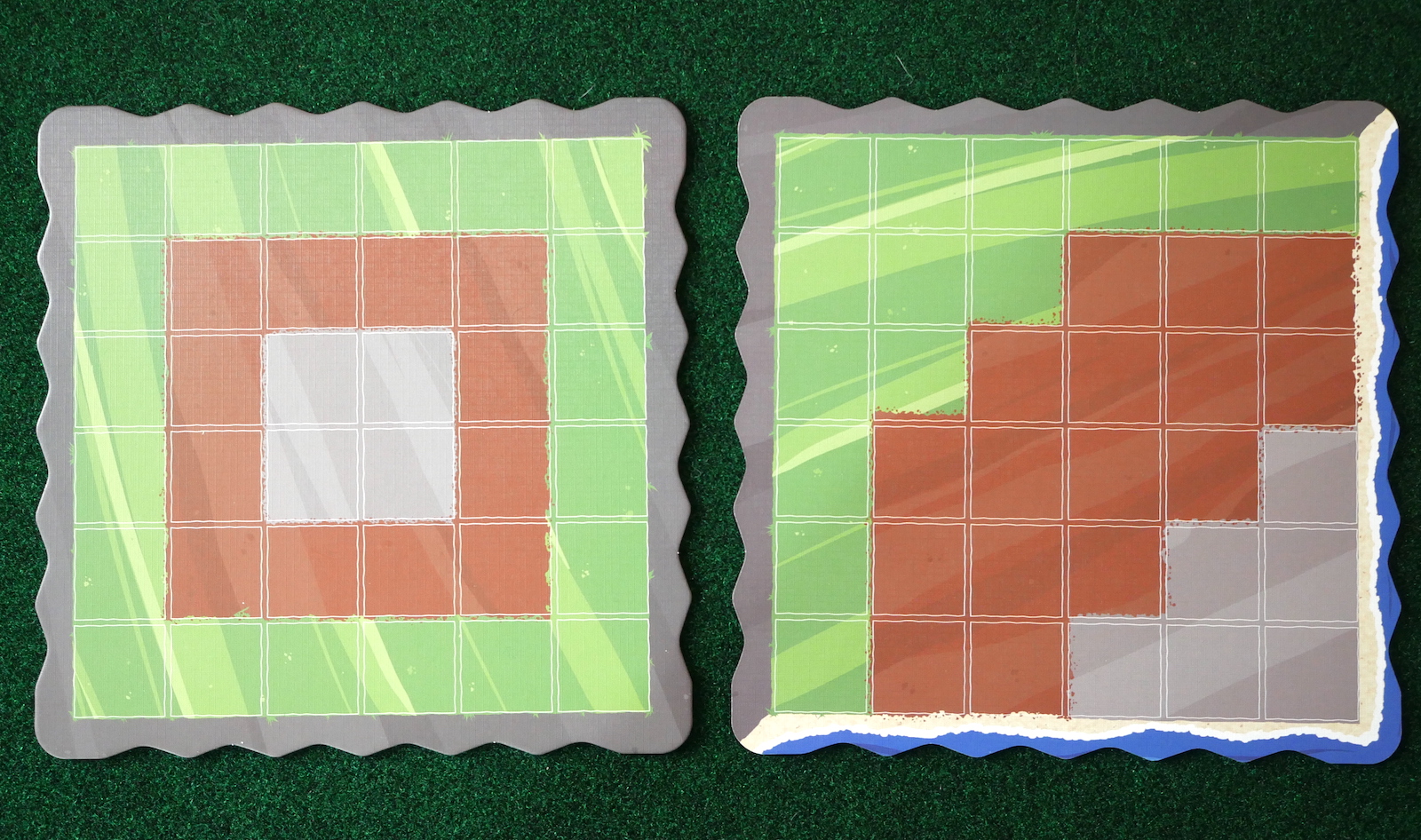 Standard city board and beach-front property city board

A few variant rules and components were included in the box, and will likely be gated in the Kickstarter as stretch goals; The opposite side of the player board has an alternate city block configuration, with the right and bottom edges representing a beachfront with the zones radiating out from the bottom right corner as opposed to the center. Roads can be particularly tricky with this board as they have half the edges to connect to. Another variant introduces construction tiles, which can only be used with the standard board face. Construction tiles are randomly placed diagonally from the top left center of the board, blocking any tile placement until they are removed from the board. Removing them requires two or more tiles to be placed adjacently in the same match as the two colors depicted on the construction tile. This basically amounts to an additional hoop to jump through, adding a bit of complexity to the game. These tiles are also used in the solo variant, which is basically the same but the player is not allowed to use the color with the most amount of cubes until the restriction is lifted in the final three turns. Finally, if you have any younger players joining a game, there is a family variant that only scores the bonus tiles along the edges. 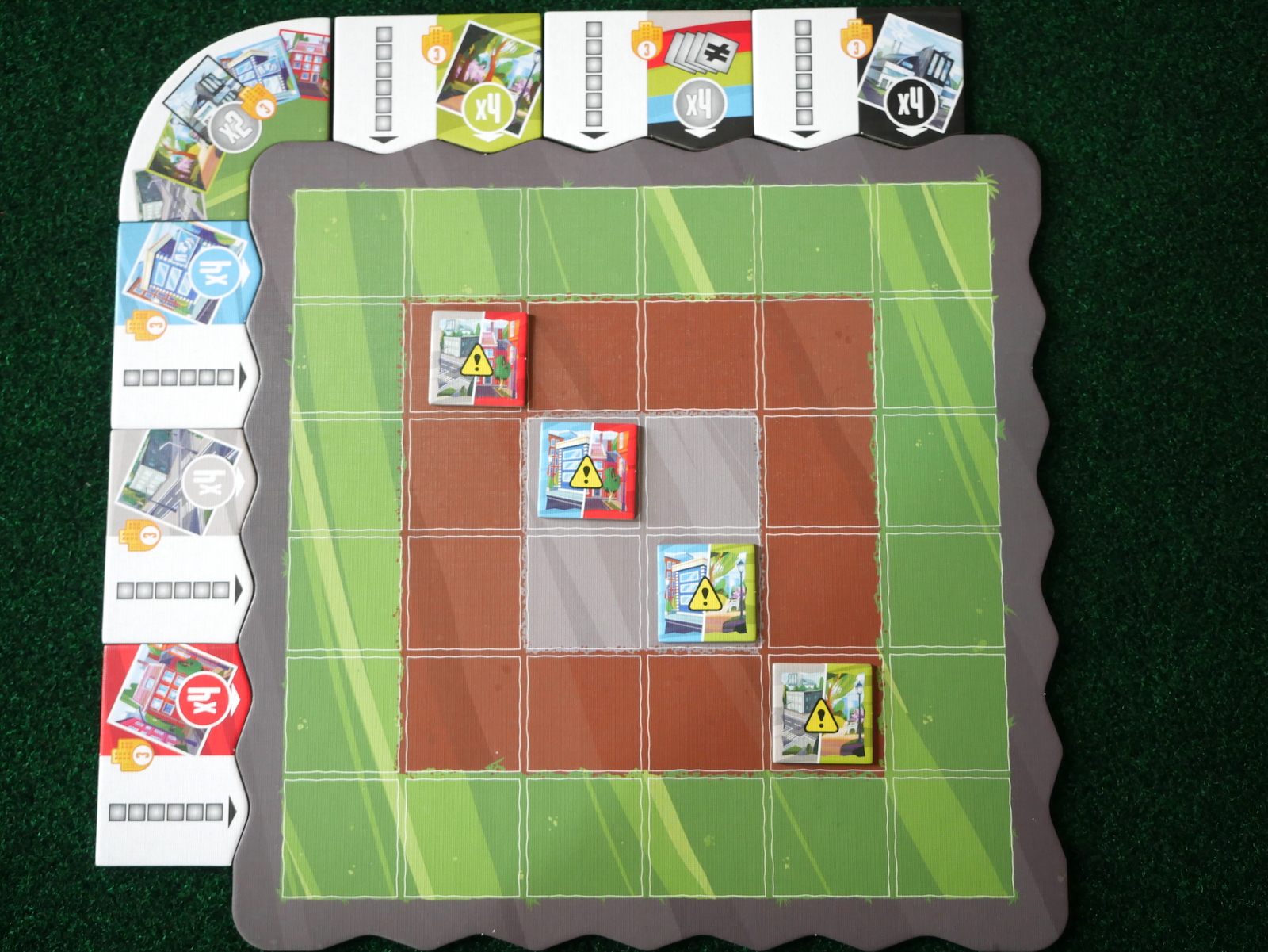 Shake That City hits Kickstarter on November 29th, sign up for a reminder here.

Editor’s note: After this review was published, it was brought to our attention that a rule was misinterpreted, that each player’s bonus tiles should be oriented the same as opposed to the top and left regardless of perspective, as the following graphic illustrates: 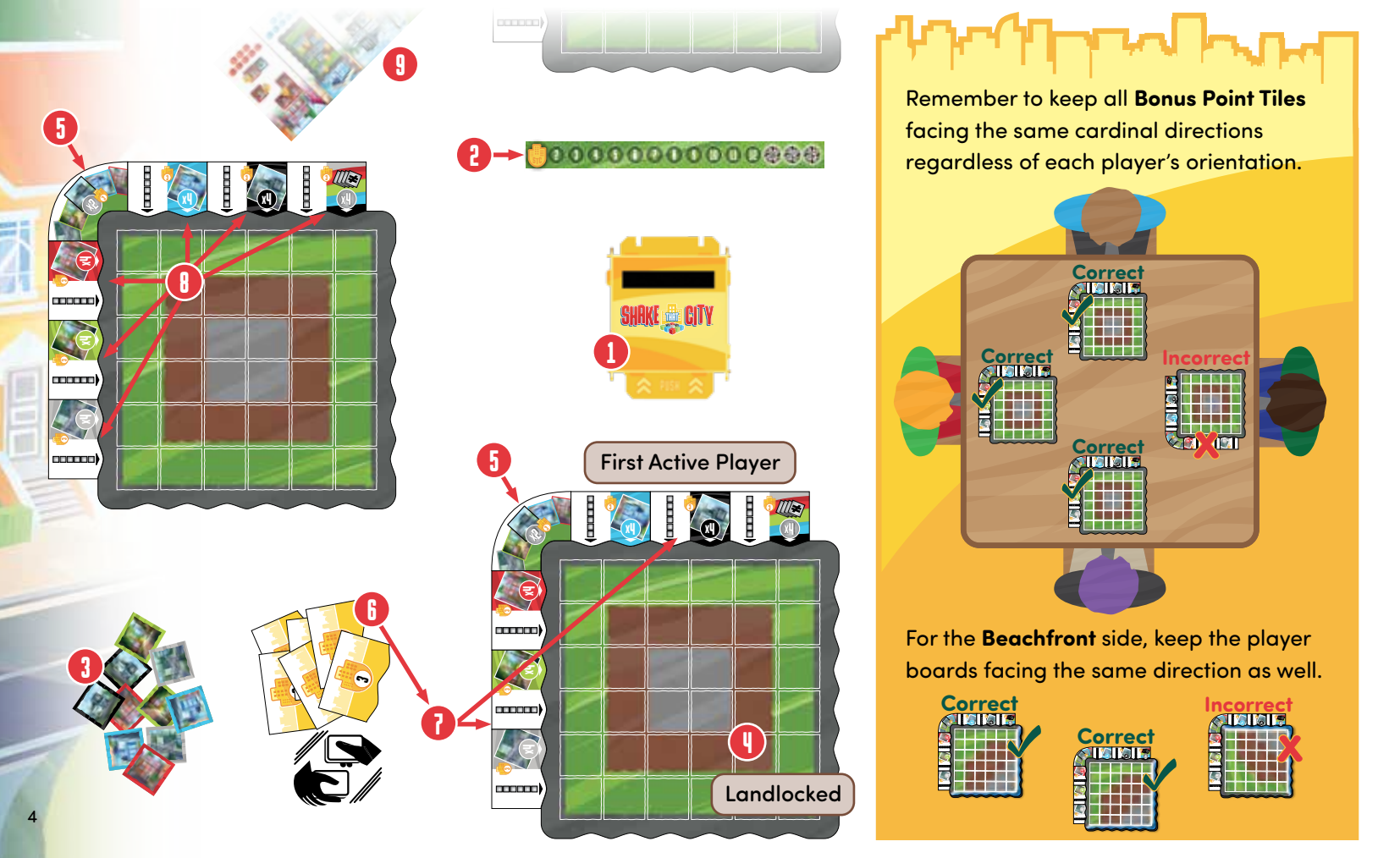 We went ahead and played a couple of games the correct way, and while it didn’t change the gameplay very much, it did play into some active player selections as the tiles and cubes were aligned for the whole table.

Ultimately, Shake That City isn’t breaking any new ground in terms of mechanics, but the gimmick of shaking a box full of colored cubes is much more fresh and fun than drawing cards or rolling dice to determine where tiles can be placed. The variability based on player perspective and randomization of elements before and during the game gives the game a bit more life than similar offerings, and the bright colors and shaker box make for fun table presence.

Mike Dunn is the old man of Gaming Trend, having cut his teeth on Atari consoles and First Edition Advanced Dungeons & Dragons back in the day. His involvement with Gaming Trend dates back to 2003, and he’s done everything from design and code to writing and managing. Now he has come full circle, with a rekindled passion for tabletop gaming and a recent debut as Dungeon Master (nearly forty years after he purchased the original DMG).
Related Articles: Shake That City, Tabletop
Share
Tweet
Share
Submit