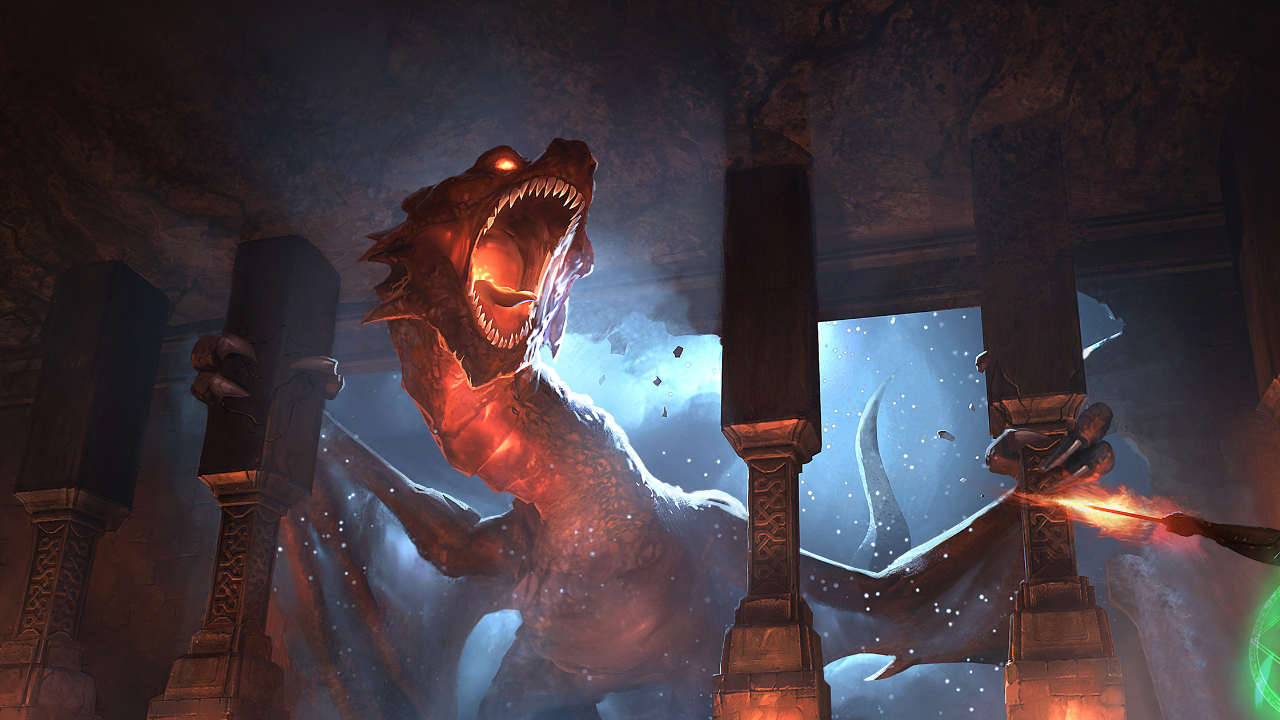 Once upon a time, long, long ago, videogames had incredibly tough puzzles and there was NO INTERNET! Terrifying, I know. You had to work at puzzles and really bang your head against the walls until you figured them out. One of my favorite games of the NES era (though ultimately I played it on my Amiga 500) was a game called Shadowgate, and when other self-described puzzlers were asking players to find keys and then jam them into the doors as the height of their challenge, this game was killing players by the score. This puzzler was a breath of fresh air, offering danger and devious puzzles around every corner. Fast forward from1987 to today and we get to experience what I believe was how the developers envisioned Shadowgate so long ago. Let’s dive headfirst into Shadowgate VR: The Mines of Mythrok.

The 1987 version as well as the 2014 remake of Shadowgate used an original Myst-like system whereby you progress by taking a single step and then assessing the space for puzzles, clues, and hidden dangers. Developer Zojoi (founded by original game’s co-creator Dave Marsh) takes a radical step for Shadowgate VR by moving entirely into the 3D space. Here’s a bit of gameplay to whet your appetite.

Frankly, I’m really surprised at just how good Shadowgate looks on the Oculus Quest 2. Since it runs natively, there’s only so much graphical power available to the game, but the Zojoi team has squeezed out every last bit. There are plenty of bricked-in corridors to explore, to be sure, but even these bricked sections are well-detailed. It’s important that they are detailed as there are hidden chambers kept secret with loose bricks, levers, tapestries, and various other set dressings that need to look natural to blend in. It’s not quite the pixel hunt that its predecessors could be, but there are plenty of times where I had to really analyze the environment to proceed.

In terms of moment to moment gameplay, you’ll be using two objects primarily — a wand and eventually an orb that can generate a mystic shield. Your wand can unleash fireballs, and your shield can block incoming projectiles, magical or otherwise, at least until it runs out of juice and needs to regenerate. You’ll end up using your wand for more than combat, however — it’s your primary tool for uncovering secrets. Many items are hidden with magic which can be dispelled with a quick blast of fire, revealing them for further inspection or interaction. Thankfully, it’s not your only help in solving puzzles.

Odin, a fully-voiced raven, is your steadfast and only companion as you descend into the Mines of Mythrok. He can offer up some hints when you are stuck, with the first one being vague, and the third being fairly direct on what you need to do to progress. In between, however, he offers up some excellent snark, often about how you are failing to push the whole adventure forward. It’s fun, and very well acted, though you can turn it off in the options if he gets on your nerves. Beyond offering some laughs, he also gives you a sight beyond your own. By directing him to various perches and then jumping into his mystical eye, you can see things otherwise concealed. This can be a hidden chest with potions to restore health, coins, or special items like keys, runes, and more. If you find yourself stuck, you might direct your feathered friend to a nearby perch and see what he can see.

As you explore you’ll find circular runes where you can stand for a few moments to save your progress. Since death is a very real and ever-present reality, you’ll want to save early and often. Thankfully, there’s no loading other than the initial sequence, so even death is only a small setback. It takes the sting out of it without removing it completely. That being said, let’s talk about what will be killing you!

The creatures in Shadowgate VR: The Mines of Mythrok are downright hair-raising. Spiders the size of a Buick, fast moving spiders (you don’t want to play this if you are arachnophobic), flying worm-like creatures, and bitey worm creatures that crawl are just some of the monsters you’ll encounter. They never stop being creepy, and even when you know they are coming they still make the hairs on your arm stand up. There are far larger and more dangerous beasts ahead, but I won’t ruin the surprise here.

Traps are the stock and trade of any good dungeon, and there are traps aplenty here. Magical projectile launching traps, large spike grates that’ll drop on your head killing you instantly, spring-loaded traps under your feet, pillars that drop if you step on them, and more will keep you on your toes. Be careful what you pick up in a dungeon. The traps and the puzzles come together beautifully to provide just the right balance of mystery, danger, and thought provocation. The Zojoi team really nailed it here.

There are several comfort options to abate nausea, though you’ll likely end up using both to complete the game. Natural motion lets you move through space, and teleportation is a choice, but some puzzles can only be solved with teleportation. So, hypothetically, if you found yourself on a bridge with only a few squares that are safe, you might want to not kill yourself repeatedly trying to use natural motion — teleportation is your key to freedom.

There are a number of updates that came courtesy of the Halloween patch, some of which smooth out some of the more challenging areas, and others just for fun. For example, I mentioned that the spiders are terrifying in this game, but now you can change the spiders into cute little buggers that are, frankly, still a little creepy. Similarly, you can buy and equip little hats for Odin, cosmetics for your weapons, and more. There are even a few additions like healing pools in the late game to help with balance, and some general tightening around the narrative. It’s a good sign that the developer is this invested in the future of the franchise.

My only real complaint with Shadowgate VR: The Mines of Mythrok is that I’ve had to restart a puzzle due to the AI getting stuck, and a particular sequence did hit me with a touch of nausea. In one instance, the spiders I had to kill by moving a series of pipes so I could launch fireballs at them had gotten stuck, essentially “vibrating” in place, unable to reach the areas of their cage where I could slay them and move forward. There is no option to restart at a save point that I could see, so I had to simply close the game and restart it instead. The second challenge was a “warping” sequence that gave me a bit of positional nausea thanks to a mine cart. That sequence is thankfully short, but I did have a seat for a moment afterwards. Given how well I did with the rest of the game, it didn’t stop me from continuing to use the smooth motion option. Neither of these were particularly egregious issues, and the latter is more to do with my personal comfort level, but I’ll readily admit that I’m not a sturdy VR gamer — if this only wobbled me a little, you’ll likely be just fine.

Shadowgate VR: The Mines of Mythrok will take you about five hours to complete, and with the subtitle of the game being “Book One of the Shadowgate Saga”, it’s clear that Zojoi intends to continue to deliver continued adventures. Whether that $24.99 price tag is too stiff, or you want to wait for a sale is up to you — from my perspective, this is one to support at full price.

You would never know that this was Zojoi’s first VR game. Entirely too many VR titles are merely recycling concepts we’ve already seen in numerous tech demos. Shadowgate VR does use some familiar techniques, but the execution of those techniques is a cut above. Sure, many sequences are about ultimately unlocking a door to the next area, but the puzzles in between are downright challenging. I enjoyed being challenged, and it was familiar ground — this was 1987 all over again, and I loved it.

Shadowgate VR: The Mines of Mythrok

With a shift from stationary puzzling to action-oriented (but still with puzzles!) Shadowgate VR is an important step for the franchise. It preserves the soul of the original, but modernizes it for a whole new audience. This first chapter is a taste of things to come, and I’m excited for it. Now I’ve just gotta get over those Buick-sized spiders...

Ron Burke is the Editor in Chief for Gaming Trend. Currently living in Fort Worth, Texas, Ron is an old-school gamer who enjoys CRPGs, action/adventure, platformers, music games, and has recently gotten into tabletop gaming. Ron is also a fourth degree black belt, with a Master's rank in Matsumura Seito Shōrin-ryū, Moo Duk Kwan Tang Soo Do, Universal Tang Soo Do Alliance, and International Tang Soo Do Federation. He also holds ranks in several other styles in his search to be a well-rounded fighter. Ron has been married to Gaming Trend Editor, Laura Burke, for 21 years. They have three dogs - Pazuzu (Irish Terrier), Atë, and Calliope (both Australian Kelpie/Pit Bull mixes).
Related Articles: Shadowgate VR: The Mines of Mythrok, VR
Share
Tweet
Share
Submit