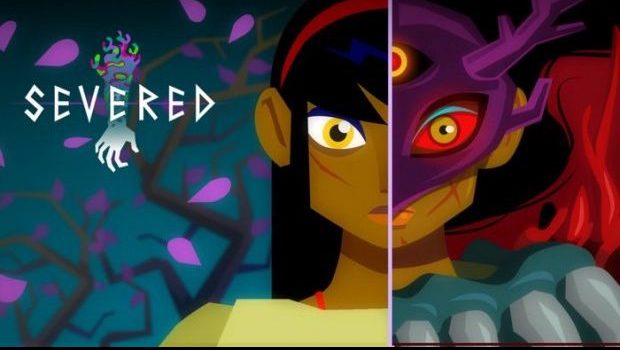 Severed is the first touch-based action game I’ve ever loved. It carries itself with intelligence and fluidity, using a hybrid of thumbsticks and touch controls in ways that are intuitive and never gimmicky, making Severed feel perfectly designed for PlayStation Vita. Even beneath its polished game design, though, Severed contains gripping narrative themes that will stick with me long after I’ve finished playing. Engaging and smart, Severed easily ranks among the best games in the Vita library.

A departure from developer Drinkbox’s joyful and hilarious previous game, Guacamelee, Severed is a first-person dungeon crawler in which you use the left thumbstick to move and the touch screen to swipe your sword and interact with the environment. However, unlike Guacamelee, Severed presents a much more solemn mood.

Players control Sasha, a young woman who awakens after a devastating incident to find her right arm removed and her family missing. Wounded and emotionally fragile, Sasha sets out on a mission in a twisted fantasy world to find her family and pick up the pieces of her life.

Severed is surprisingly gloomy and the game’s heavy nature carries itself throughout its excellent presentation. Despite the colorful and cartoonish art style, Sasha’s journey is one filled with danger, hopelessness, tragedy, and loss, and Severed’s bleak tone resonates throughout the entire game. Environments are almost entirely devoid of life, and the vacant backdrops create an eerie feeling of loneliness. The chilling soundtrack helps set Severed’s dire tone. And enemies feel creepy, as the Tim Burton-esque monster design is creative yet disturbing. Severed is a grim affair from a story perspective, but it’s the sum of all of these elements that really adds to the already somber presentation.

As great as the themes are, though, it’s Severed’s approach to combat that really shines through. Players use the Vita’s touchscreen to swipe at enemies, but battles are much deeper than flailing your finger around aimlessly. Opponents usually block in all but one direction, leaving a small opening to attack, so finding the right angle and striking with precision are the key to victory. Parrying also becomes important to master, as successfully swiping opposite a monster’s attack nullifies all damage and usually leaves the opponent in a state of momentary weakness. Fights grow even more complicated when dueling against multiple foes at once, as you’ll be forced to monitor multiple incoming attacks, while prioritizing which of your foes warrants the most focus. The intelligent monster design works wonderfully with the game’s combat, and fights often feel like a puzzle unto themselves. Battles in Severed are like Fruit Ninja with finesse; they’re fierce and swift to the point that I’ve never felt like such a badass swiping my finger across the screen.

Severed’s skill upgrades help to keep combat enjoyable throughout the game. Landing continuous strikes against enemies builds up Sasha’s focus meter, which briefly freezes time when a monster is defeated to allow her to sever her opponents’ limbs. The collected limbs can then be used in a skill tree to purchase upgrades such as damage resistance, greater focus windows, and increased chances for critical attacks. There’s a morbid quality to wearing the carcasses of your victims, but the useful upgrade system is a necessity for some of the tough battles you’ll face later in the game.

The level design is also intelligently crafted to make exploration enjoyable. Dungeons require strategy, backtracking, and puzzle solving as the Zelda-like environments open up as you progress. Trapdoors, keys, and gateways that only open on a day/night cycle are just a few of the obstacles that help make Severed’s levels feel like more than just linear hallways. There’s still the occasional empty room, but for the most part, Severed’s navigation is engaging while also rewarding those who choose to revisit previous areas.

In fact, Severed’s limited focus on anything besides the main quest might be its most significant drawback. Sasha’s adventure is one of motivated urgency, but Severed often feels straightforward in how little it deviates from its ultimate goal. There are no side quests or distractions to help break up the continued dungeon exploration, and Severed’s campaign will make up most of your playtime. I was able to complete the game in roughly six hours, even with how frequently I chose to venture off the beaten path in search of collectibles, and even the platinum trophy is obtainable in about 8-10 hours. I’m grateful that Drinkbox didn’t pad out the compelling story with unnecessary sequences, but I found Severed so enjoyable that I just wished there was more to it.

Severed is my favorite PlayStation Vita exclusive. It’s beautiful to look at, empowering to play, and features a far more engrossing story than it seems on its surface. Most importantly, it does all of those things in an intelligent manner, utilizing clever puzzles to make the touch screen integration feel natural. While I wish it were longer, that’s just a testament to how much I loved Severed. This is touch-based gaming at its true potential and a must-play for Vita owners.

With an emotional story and touch-based combat that feels both clever and natural, Severed is an excellent game that will stick with you long after you’ve finished playing.

Gaming Trend's resident amiibo collector, Matt's a lifelong gamer with a soft spot for Nintendo. As a new father, Matt often struggles to stay as involved as he has been in years past but can always be counted on to come back for some engaging geeky conversations. A resident of Philadelphia, he is currently working on building up his Man Cave with all things Marvel, Star Wars, and Video Games. As an old-school gamer, Matt firmly stands by his belief that gameplay will always be more appealing than story.
Related Articles: Severed
Share
Tweet
Share
Submit