There’s a serial killer on the loose in Paris. You’re driving your cab when, suddenly, you’re attacked. The next thing you know, you’re laying on a hospital bed with a hole in your side. You’ve been in a coma for three months, the passenger you drove is dead, and the police don’t have a clue. If you can’t find the real killer in seven days, you’ll take the blame and the culprit will go free. Armed with only your taxi and a cork board, you’ll need to find clues throughout the city from your passengers and piece together who the real murderer is.

When starting a new game, you’ll choose a case and the difficulty. Starting out, there are three cases to choose from, each with its own theme, but they are largely the same. The identity of the killer is randomized, so essentially you’re just choosing their MO; one killer might be more ritualistic than another who is trying to enact justice. It might not change how you play the game, but it changes the context just enough to make you think about each case differently. In your investigation you’ll pick up passengers, some of whom may be a suspect, and talk to them as you drive to their destination. It’s a simple premise, but the game is filled with tons of diverse and well written characters. 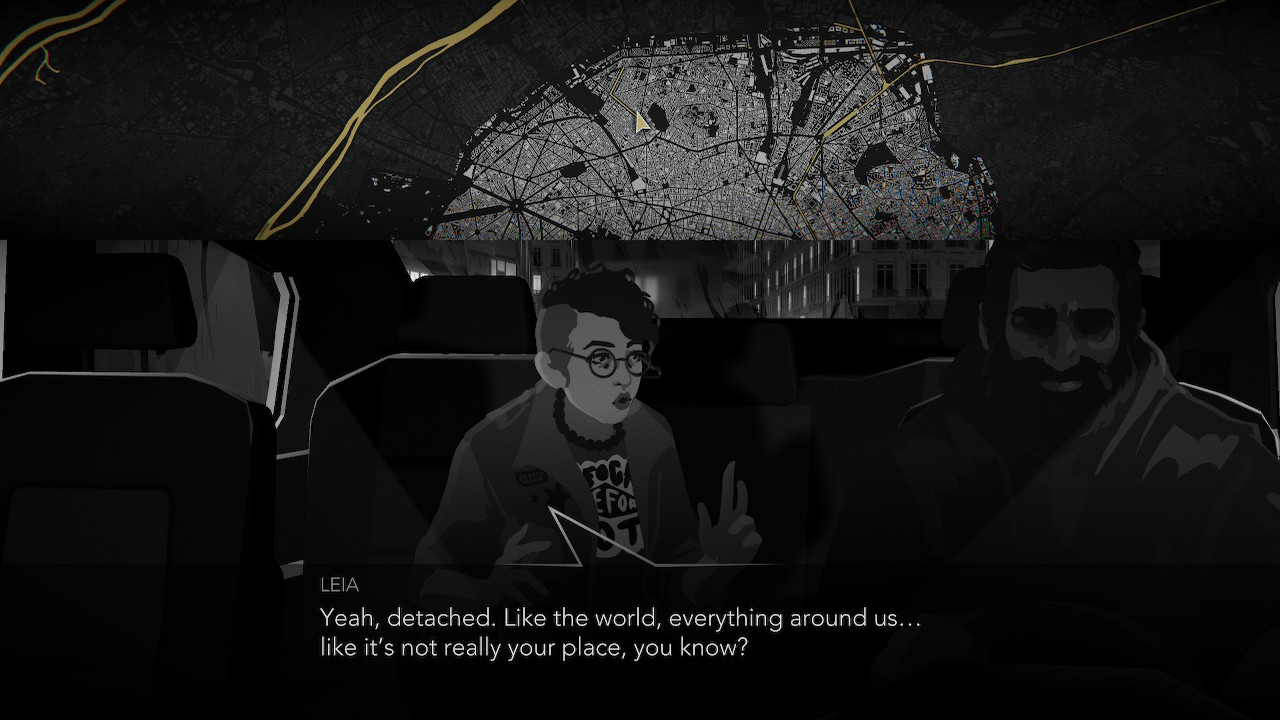 You’ll encounter politicians, homeless people, a woman who says she’s from the future, people from all walks of life, and engage each of them in conversation. For the most part, you’ll learn more about them, their troubles, and help them in some way (or just flatter them and hope they tip well). Some of your passengers, whether they intend to or not, will give you information on the case to review when you finish your shift each night. After tallying up your (lack of) profits for the night and hopefully not losing your job, you’ll begin reviewing evidence and checking your cork board of suspects. Evidence you’ve yet to look over is placed on the desk while facts you know about the case are connected with string to each suspect on the cork board. Reviewing evidence takes time, and you have to go to sleep eventually so you won’t have time to check out everything in a single night. While I never had trouble with this time management aspect of the game, that’s not really what makes the game unique or fun. During this reviewing phase of the game, you are only presented with facts. The man you play as will never offer up theories or try to connect the dots himself, you’re left with your thoughts and suspicions until the time comes to choose who the killer is. While after a few days your police contact will rule out a suspect, everything else is up to you to figure out, and it’s refreshing to play a game that trusts the player enough to do that.

While the mystery may catch your interest initially, it’s your passengers that will keep you coming back to Night Call. They’re all just so interesting, even the ones I’m not fond of. They each have an interesting story to tell or infer. One of my favorites is an avid movie goer. Each time she gets in the cab, she’ll have something to say about whatever film she just saw, and they’re all real movies too. Like, one time she spoke about Psycho and how she now sees her ex similarly to the title character. Every single character is unique and genuinely feels like a real person, telling their weirdest thoughts to a stranger they’ll probably never see again. Speaking of, and I won’t spoil anything here, the character you play as also has a story of his own to discover through repeated playthroughs… 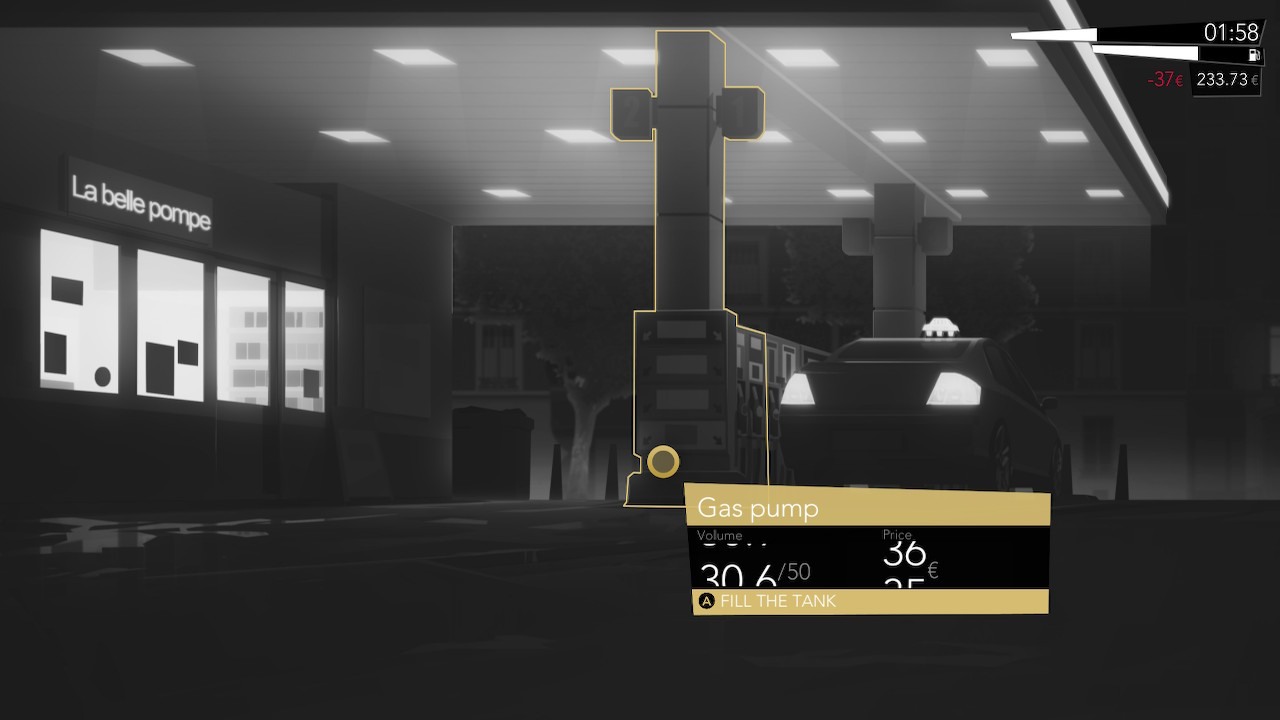 As you drive around Paris, you’ll be listening to a chill, synthetic soundtrack that will put you in the mood to read and think. It’s reminiscent of a cyberpunk noir in the best way, even though the game takes place in modern day and touches on a few current issues. The game is presented in black, white, and yellow solidifying this noir atmosphere. The characters are also smoothly animated, even if they repeat animations constantly.

While the writing and atmosphere of a rainy Paris will keep you engaged, it feels like the game is trying its hardest to keep you from enjoying it. It’s incredibly glitchy, especially for a visual novel. More than a few times I would move my cursor on to a passenger to pick up and the game wouldn’t let me click on them, or anything for that matter, requiring me to either quit and restart the night or waste some precious time and money listening to the radio for a few in game minutes. I would also go to investigate something and the game would just kick me out immediately after loading the event, wasting more time and losing out on any evidence I could have acquired there. Oh, and the game will also crash if you try to open the Passidex, an index of passengers, if you have someone currently in your car. The game will stutter when advancing text, the controls will just stop working at times, but I still want to play more. There’s something truly fascinating about driving alone each night in Paris, making connections in whatever ways you can.

Night Call may draw you with its murder mysteries, but you’ll keep playing to learn about its numerous, interesting characters. It’s incredibly well written, if a bit pretentious in the best way. Unfortunately, it’s numerous glitches may frustrate players too much to keep playing.

David is the kind of person to wear his heart on his sleeve. He can find positives in anything, like this is a person who loved Star Fox Zero to death. You’ll see him playing all kinds of games: AAAs, Indies, game jam games, games of all genres, and writing about them! Here. On this website. When not writing or playing games, you can find David making music, games, or enjoying a good book. David’s favorite games include NieR: Automata, Mother 3, and Gravity Rush.
Related Articles: Indies, Night Call
Share
Tweet
Share
Submit