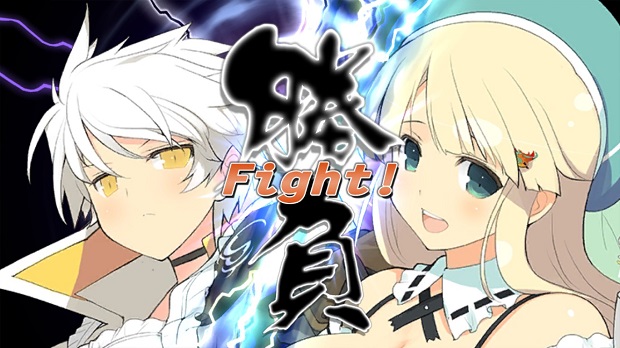 SENRAN KAGURA Bon Appétit! – Full Course is advertised as a rhythm game with cooking elements. Sadly, the rhythm sections are subpar and it could barely be considered a cooking game. It is, however, full of fanservice – and not in the good way.

As the story goes, a man named Hanzo comes into possession of what’s called the Secret Ninja Art Scroll, which can grant you one wish. He decides to create the Super Dish Gourmet Cook-Off and offer the art scroll as the grand prize. Many different shinobi women enter the contest for their own reasons. Shiki wants to help her roommate with writer’s block find new inspiration for her manga, while Ikaruga simply wants to keep the scroll out of the wrong hands. I wasn’t expecting incredible depth, but the story is definitely more silly than substantial.

This rhythm game is set up in the format of a cooking competition, which is rather unique. Each round features a song split up into three dishes. The better your accuracy is, the bigger and tastier your dishes will be. You can lose on the first or second dish and still win overall, but you can’t perform poorly on the Super Dish or you’ll lose the whole thing and have to start over.

One thing the Senran Kagura titles are known for is their gratuitous nudity. Though Bon Appétit unsurprisingly fits right into this trend, the way it does so is distasteful. During every round, your dishes are evaluated as you make them with a taste test. The winner gets a hearty salute, and the loser gets some of her clothing torn off. (Isn’t cooking in your underwear fairly unsanitary?) If you perform exceptionally well, you will earn a full heart. This heart will be dropped randomly into the song, and landing on it means being treated to some close-ups of pixelated anime booty. After the round ends, you’ll see the losing girl lying on top of a pile of dessert, naked aside from some strategically placed dollops of whipped cream and drizzles of chocolate sauce.

This game in a nutshell.

The Story Mode in Bon Appétit goes through five rounds of cooking. If you dislike any semblance of story interrupting your enjoyment, you can play six rounds against various shinobi in Arcade Mode with no narrative in between. Then the Free Mode is one special round where you can choose both your character and your opponent. There’s a Dressing Room for the costumes, lingerie, and accessories you earn. You can change your favorite girl’s outfit, or ogle her in chocolate and cream as long as you like. Finally, a digital library contains the images, music, and voice clips you unlock when you complete each story.

Now, I’m not such a prude that I dislike sexuality in games entirely. However, Bon Appétit feels creepy and non-consensual. Most of the characters say things like “I don’t want this” and “this isn’t allowed” when their clothes come off; any lines of dialogue that implied a girl actually liked what was happening were rare. Often through the cooking challenge, you can glimpse the losing shinobi crying, and many women have tears in their eyes during the bonus heart and dessert scenes. The amount of innuendo was insane, and sometimes you can even hear moaning noises when you’re navigating through menus. Much of my experience with this game was miserable.

Not to mention the underage characters and “kindergarten” items in the Dressing Room.

On the other hand, HuniePop is a good example of in-game sexuality done right. It has its fair share of well-endowed women and delicious outfit changes, but it feels flirtatious and light. Each character has her own personality and interests, so having a successful conversation presents a challenge, going on a date gives you nervous butterflies, and taking them home at the end of the night is rewarding. Not to mention, the game portion was well thought out and played like a slightly more complex Bejeweled.

The designer behind the Senran Kagura games, Kenichiro Takaki, was recently quoted in an interview as saying he wants to bring a “fun and sexy essence” to the games he makes. This concept is completely fine with me, but it does not come across in Bon Appétit. If he really wanted a lighthearted tone, he could’ve made the girls appear happy instead of upset, and not had them call the viewer “inappropriate” or “perverted” as if the goal is to feel like you’re violating someone.

Why yes, he is being carried by bats toward a giant tomato.

Granted, this game isn’t all bad. Each girl has her own favorite food listed on the character menu, which ties into what you prepare. It seems like an effort was made for the cooking process and the resulting dishes to match their descriptions. The humor on the Super Dish cutscenes can be pretty amusing, and if you land a long note, there’s a little ding like a kitchen timer going off.

And my gripes about this game go beyond just the sexual content. Some of the knife-chopping and other food preparation animations fly by so fast, it seems like they’d be seizure-inducing. It can be difficult to determine what buttons you have to hit because many of them share the same color; on up-tempo songs or higher difficulties, it becomes quite a mess. The background textures and shadows often look sloppy, and most of the shinobi storylines are weak. I thought there was a noticeable difference between difficulty levels, but reviewers have said that rhythm game experts will find everything too easy.

In short, Bon Appétit made me uncomfortable. It disappointed me both as a gamer and as a woman, and following this review I don’t plan on playing it any more.

Bon Appétit is one part rhythm game, one part cooking, and endless amounts of grimy sexuality. The more time you spend with it, the more likely it is you’ll come away feeling dirty and depressed. If you want to both enjoy a game and look at boobs, there are plenty of better titles out there.

Sarah Marchant is an office admin for a nerdy t-shirt company. She has a soft spot for indie games, a passion for story-driven titles, and a weakness for cooking games and anything with zombies.
Related Articles: SENRAN KAGURA Bon Appetit! - Full Course
Share
Tweet
Share
Submit