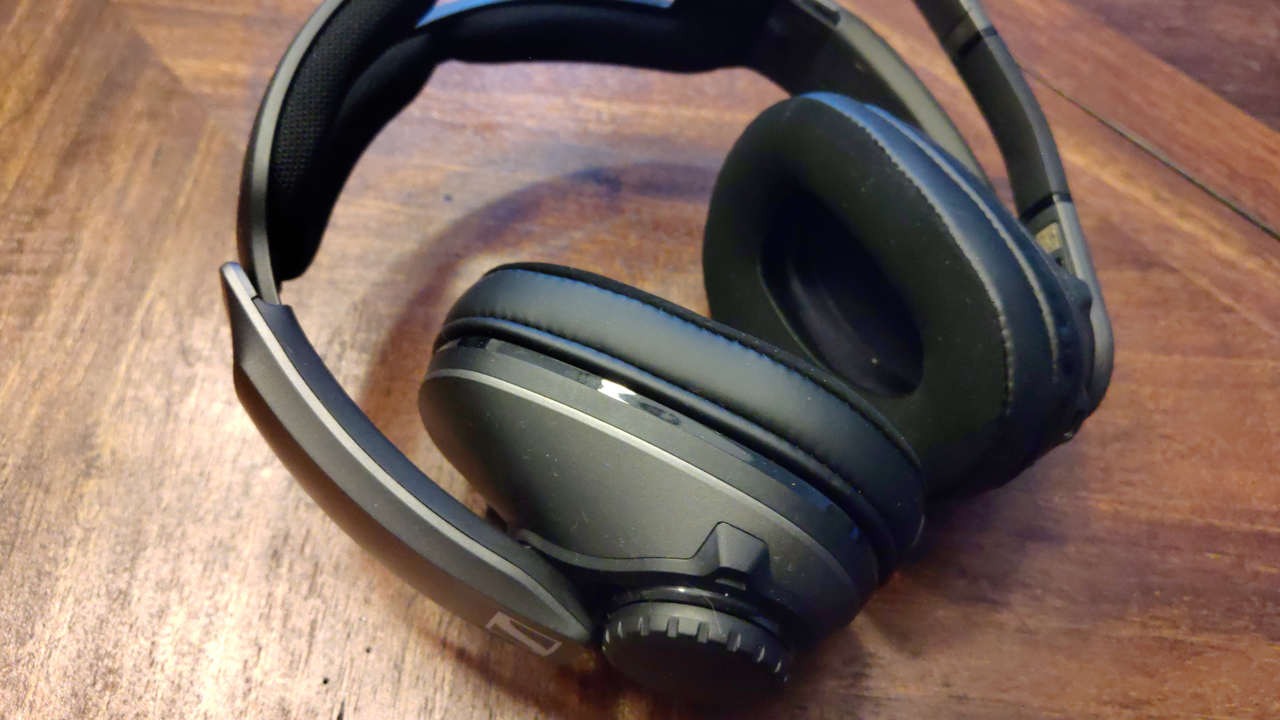 Sennheiser is well known for its enterprise-level audio solutions. They are the top choice for corporations around the world for headsets that work perfectly for things like Skype for Business every time, and without audio compatibility issues, latency, or drops in audio quality. What they aren’t well known for is their gaming headsets, but lately they are looking to change all of that. Teaming up with Denmark-based audio engineer EPOS, they aim to not just make their mark, but raise the bar, bringing together the combined engineering might of two audio powerhouses to bring that audio quality to the gaming world. Recently I’ve gotten my ears underneath their newest headset, the Sennheiser GSP 370. Let’s see if it can deliver on the lofty promises of up to 100 hours of battery life, low latency, fast charging, and comfort. 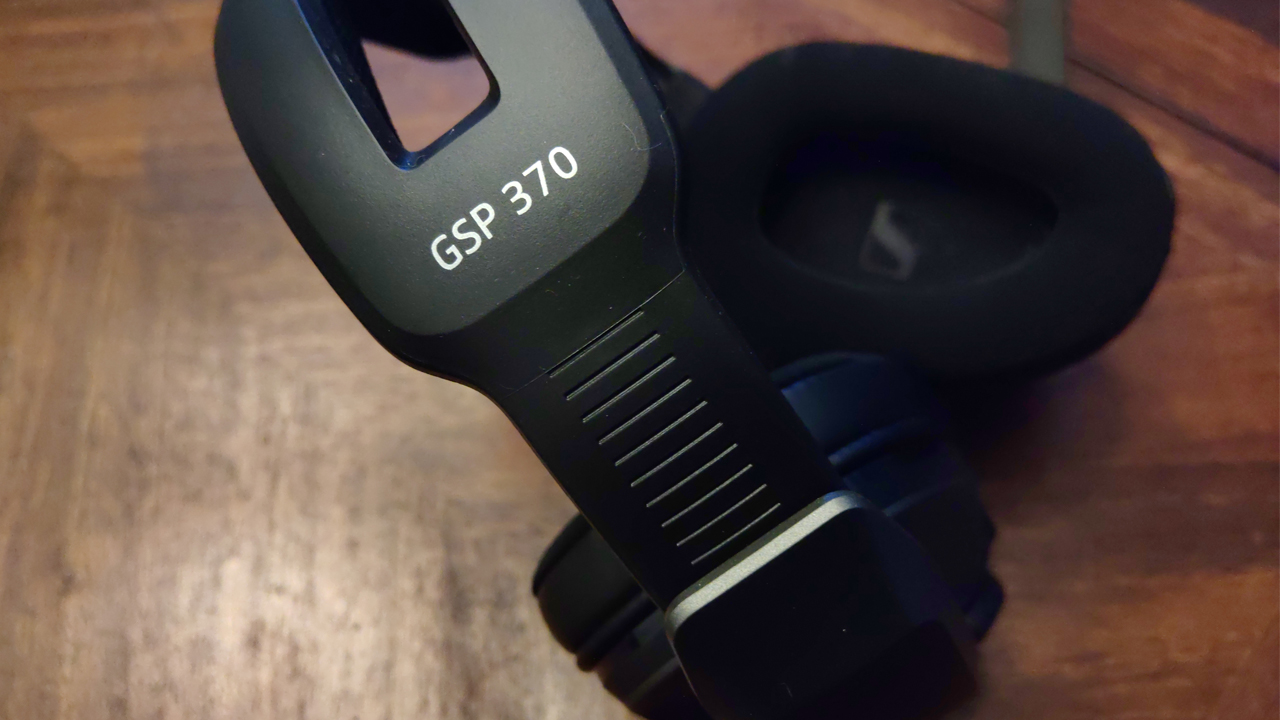 Opening the box, Sennheiser’s corporate origins are on display. The headphones don’t look like they fell out of Fortnite, nor do they look like some sort of over-engineered “gaming” focused device. Instead, the GSP 370 is a sleek and unassuming headset. Elegant in its simplicity, there are no lights or bright colors, no proprietary adjustment mechanisms, and no complicated controls. Instead, it’s a lightweight headset with an all plastic body, padded headband, soft ear cups, and a boom microphone.

As usual, let’s take a tour of the device, starting from the top and working our way down. The headband of the GSP 370, like the rest of the device, is made of a sturdy plastic to keep the weight on the device low. Split across the top to further reduce weight, and to keep the heat of having a band on your head low, the underneath of the band sports a pair of U-shaped padding mesh, with the slightest amount of ‘give’ in the center. The arms of the ear cups have 10 adjustment positions courtesy of detents in the body of the band, allowing it to fit my wife and I both easily and comfortably. 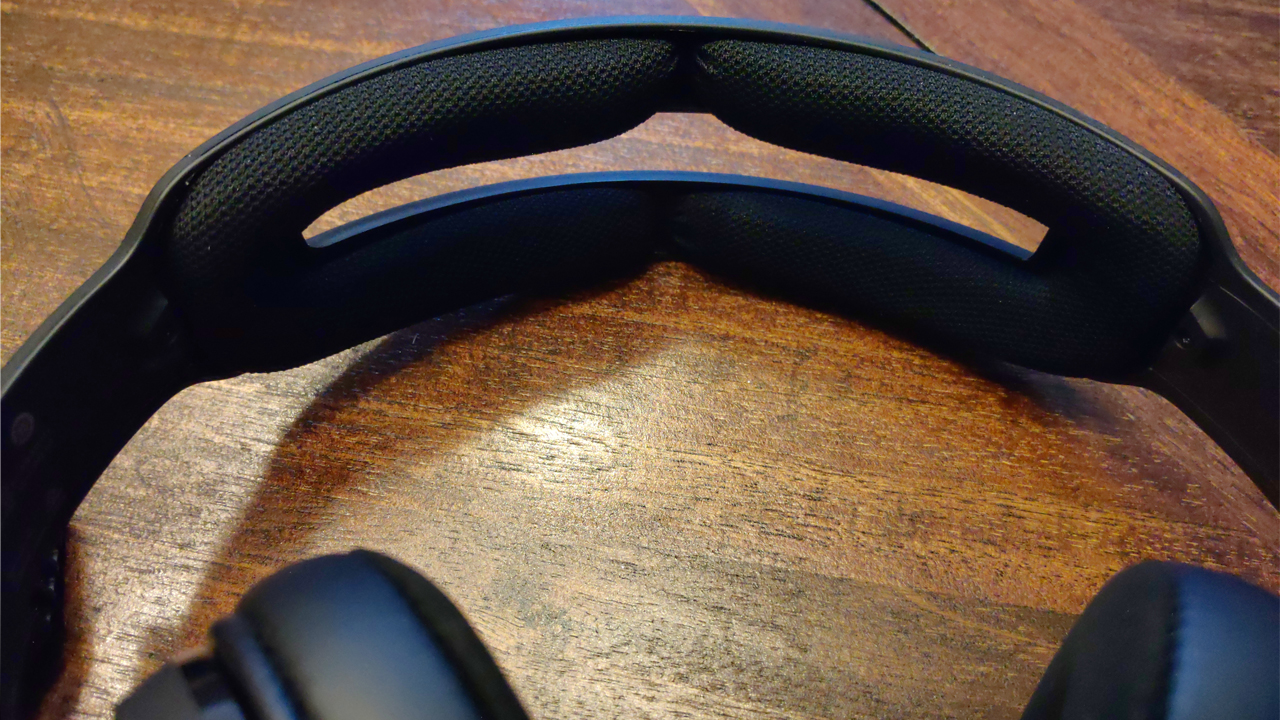 Headed down into the ear cups, the ear pads are both covered in some of the softest faux-leather I’ve felt on a headset. They aren’t as thick as that of their competitors, nor are they detachable, but they are very comfortable for long periods of wear. On the right ear cup lies an oversized audio knob, allowing you to adjust your sound without having to fiddle around with finding the right knob — there’s only one, and it’s kinda huge. On the left ear cup resides the boom mic. When in the up position, the microphone is muted automatically, courtesy of a physical switch present inside. When down, the arm articulates in the center, allowing for adjustment. The microphone tip has a hard plastic end covered with eight small holes on each side. Noise cancelling, the unidirectional microphone does a solid job of picking up my mutterings during Borderlands 3 without picking up the hum of my air conditioner, or the barking of my dogs. Where it falls flat is a lack of discreet audio adjustments, meaning you don’t have the ability to adjust the mix of microphone to in-game sound. The inability to balance it can be heard keenly when you listen to my wife and I play Borderlands 3 together in the video below. The headset she is using has these discreet channel audio functions whereas the Sennheiser GSP 370 does not:

It’s obviously impossible for me to demonstrate the audio quality of the Sennheiser GSP 370, but it is truly impressive. For music, it delivers a very robust sound with brain-rattling bass that is sure to make any audiophile raise an eyebrow. In-game sounds are conveyed perfectly, giving me some good jump scares in my VR horror games, as well as great echolocation in the Valorant beta. Higher up in the audio band is where my hearing loss suffers most, so it’s where a pair of headphones needs to shine brightest. Thankfully the GSP 370 delivers in spades, making voice work audible without as much reliance on oft-omitted subtitles.

If you were looking for a laundry list of other features and tech on the GSP 370, then you’ll be surprised that this is, in fact, the end of the list. No secondary audio mixers (what you’d use to control chat and audio volume), no microphone adjustments beyond position, and nothing else to speak of beyond the micro-USB port used to charge the device, and a small switch to turn it on and off. Once again, I’m surprised to see micro-USB continue to have life in a world where USB-C exists, but I guess we’ll have to hope for Sennheiser’s next iteration. 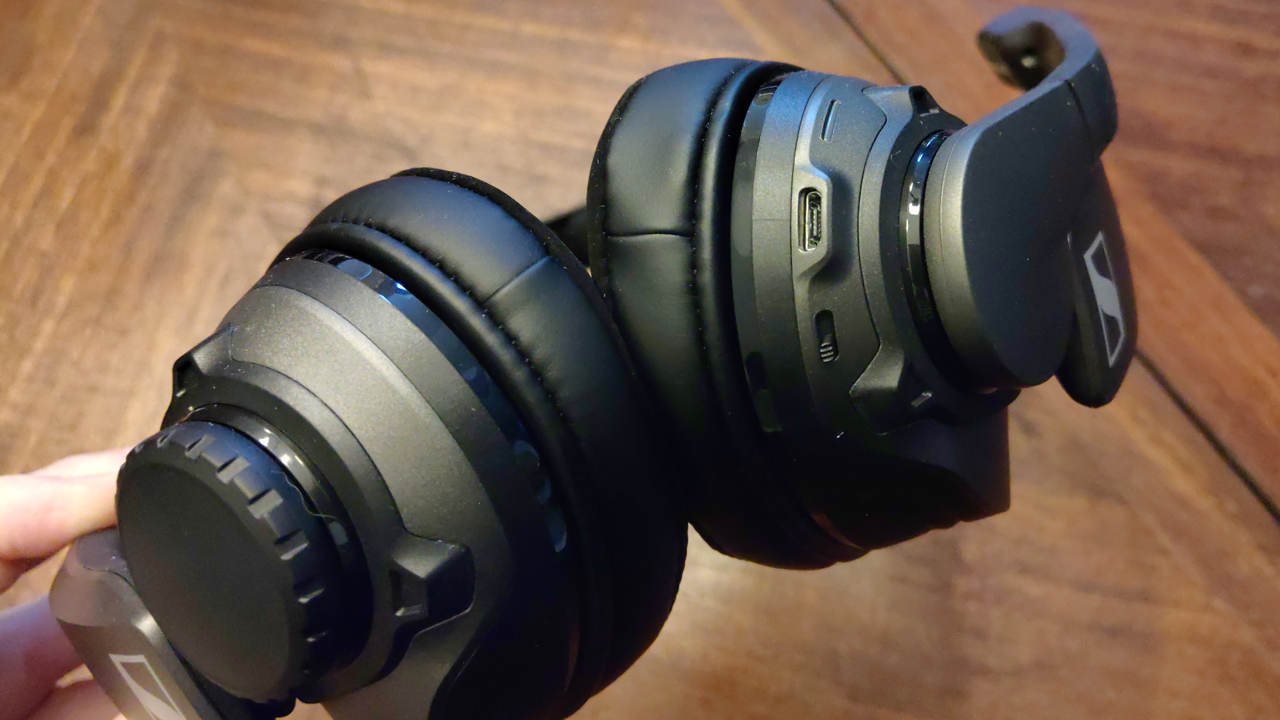 USB-C from now on please.

Beyond the headset, there are three items in the box — instructions, a USB charging cable, and a dongle to enable the device’s wireless connectivity. Of note, you can’t use the charging cable as a wired option while the device is charging, but given the purported 100 hours of battery life, that hardly seems like a setback.

Since the device uses USB and low-latency WiFi to connect, it is compatible with both PC and PlayStation 4. On PC you are afforded a few options courtesy of Sennheiser’s Gaming Suite software. In it, you can flip the headphones from 2.0 mode to a simulated 7.1 surround sound, as well as selecting between Flat, Music, Gaming, and eSports presets, though I can’t say I’ve ever been a fan of simulated surround. On another tab lies options to adjust some voice options for the microphone, as well as injecting gain and how much noise cancelling you prefer. The voice “enhancement” options have three settings: warm, clear, and none. None is obvious but warm and clear might be somewhat ambiguous of terms. Truthfully, I couldn’t hear a difference between the two, but they were both very clear.

Moving the device to the PlayStation 4 means losing the software that allows you to make any adjustments to the device. Without hardware buttons or dials on the headset, it really makes the GSP 370 a far less interesting headset. While the audio quality is still top shelf, without the ability to adjust the noise cancelling portion your teammates will hear every single thing going on in your entire neighborhood. 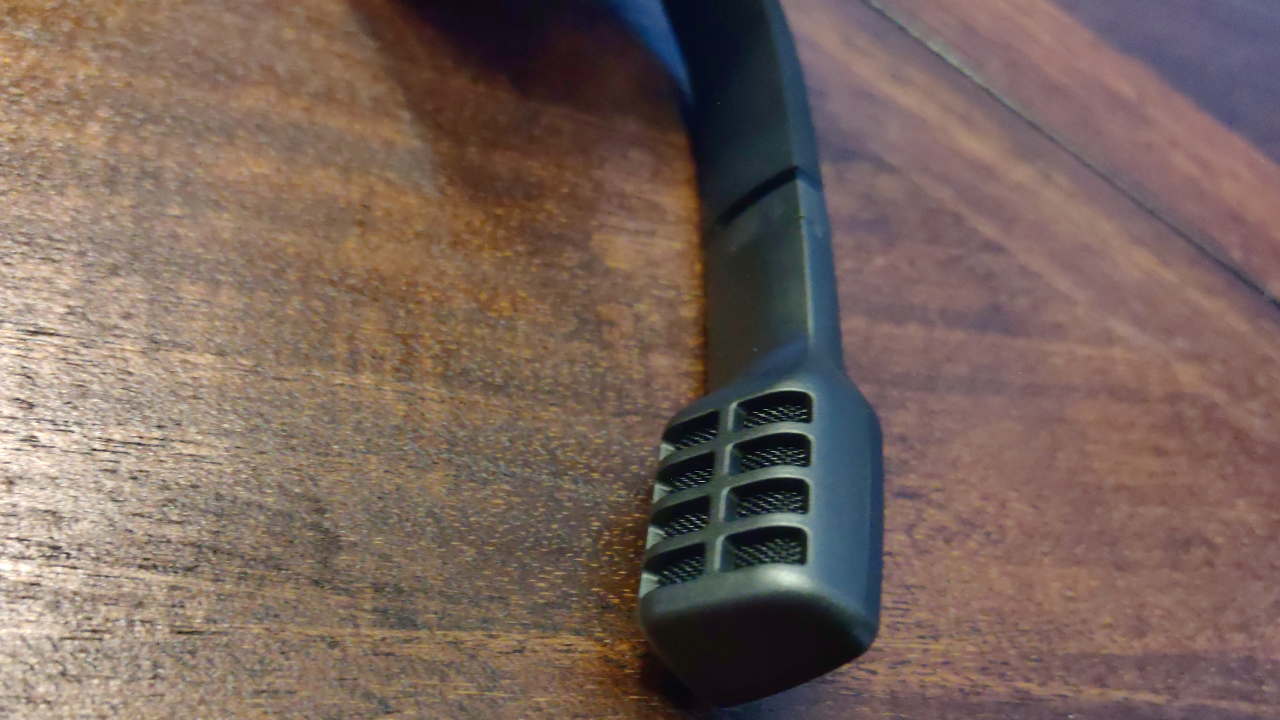 If there is one feature I didn’t expect to miss, it’s the ability to store the USB dongle within the headset. If you find yourself switching the GSP 370 between PC and PS4 frequently, you’ll want to keep a careful eye on that dongle, as the device will be impossible to use without it. It’s not a con, per se, but it’s certainly something we can hope for in future updates to this line of headsets. 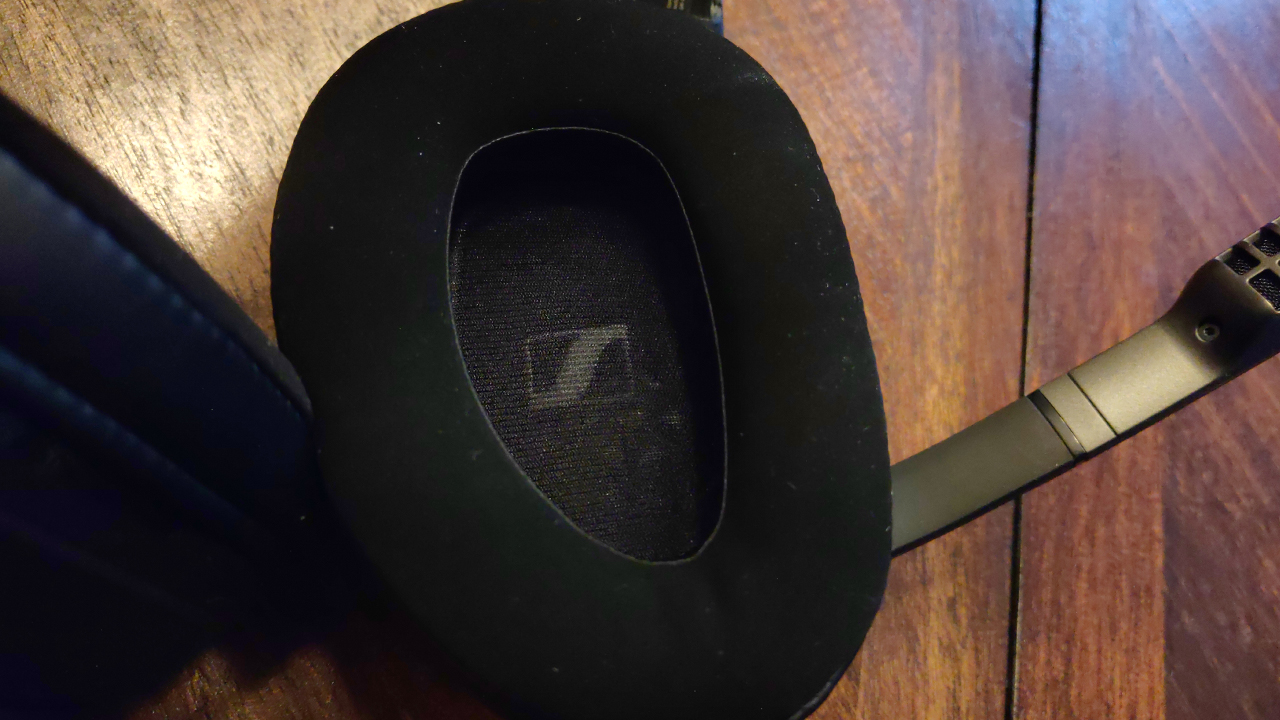 The ear shape makes for a comfortable seal that enhances the fantastic sound.

The Sennheiser GSP 370’s ear cups are not the normal round or oval construction seen on most devices nowadays. Instead, the company opted for an ear-shaped cup on this model. I didn’t expect that it would make a difference, but I was pleasantly surprised. The tighter proximity to my ears didn’t add any additional heat, but did do a far better job funneling the sound directly to my ears. As the GSP 370’s audio quality is all but unmatched, this construction made it all the better for games like Valorant where being able to hear the soft padding of your opponent’s footsteps can be the difference between victory and death.

The Sennheiser GSP 370 delivers comfort and top-notch audio in a lightweight and unobtrusive frame. Some additional engineering is needed on the microphone, and discrete audio balancing feels like a shortcoming, leaving the $199 price feeling more stiff than it needs to be. That said, it’s impossible to ignore 100 hours of battery life.

Ron Burke is the Editor in Chief for Gaming Trend. Currently living in Fort Worth, Texas, Ron is an old-school gamer who enjoys CRPGs, action/adventure, platformers, music games, and has recently gotten into tabletop gaming. Ron is also a fourth degree black belt, with a Master's rank in Matsumura Seito Shōrin-ryū, Moo Duk Kwan Tang Soo Do, Universal Tang Soo Do Alliance, and International Tang Soo Do Federation. He also holds ranks in several other styles in his search to be a well-rounded fighter. Ron has been married to Gaming Trend Editor, Laura Burke, for 21 years. They have three dogs - Pazuzu (Irish Terrier), Atë, and Calliope (both Australian Kelpie/Pit Bull mixes).
Related Articles: Hardware, Sennheiser GSP 370 headphones
Share
Tweet
Share
Submit