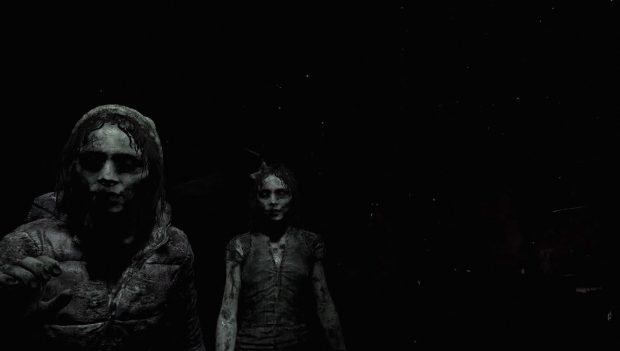 Coulrophobia, better known as fear of clowns, affects a great many people. The common belief is that it is caused by the uncanny valley effect as they look human, but have just enough variance from a pleasant face that it becomes deeply disturbing. This ‘almost human’ phenomenon is exacerbated by the common horror trope that casts clowns as evil, often paranormal, fanged beasts hell-bent on giggly mayhem. It’s upon that very phobia that Until Dawn: Rush of Blood is built.

The story sets the premise that you are participating in a carnival experience, but have inhaled some sort of toxin that makes you see and hear things that aren’t there. Locked in your cart, you trundle down the tracks, dodging all manners of horrible sights throughout seven levels, each offering the sorts of jump-scares that’ll have you sleeping with the lights on for a few nights afterward.

Of COURSE there are clowns!

Until Dawn: Rush of Blood avoids one of the most common sources of motion sickness with a single deft maneuver — it’s literally on rails. As the rollercoaster rolls down the track, your brain accepts the movement as natural, requiring no additional movements from the player save dodging overhead hazards you’ll have to duck or avoid.

As a nausea sufferer, I did have a few tough moments in the game. Going up and down steep inclines made my head swim a bit, but not enough to make me quit outright. As the game frequently slows or stops to spring those jump-scares, it gives your brain a chance to catch up.

The game offers up two control schemes, but I assure you there is but one that is useful. You can attempt to use the DualShock controller, the game offering up an arms-fully-extended pose as natural shooting position. Conversely, a pair of PlayStation Move controllers frees both arms to target incoming nightmare fuel with each firing independently. With a darkened room, the game embraces this control mechanism far better, though I had strange problems where using either control scheme would occasionally trigger a bug where my arms contorted in strange unnatural angles twisted off to the right side of my body until I could complete the level and re-calibrate.

As mentioned before, the game features seven levels of jump scares and horror. As the main thrust is that it is happening on a rollercoaster, the game works remarkably well. Dips and climbs are thrilling on the PSVR, and the head-tracking on the unit itself makes for some hilarious bobbing and weaving from the wearer. It is intuitive enough for even a non-gamer to tackle.

Like a twisted carny ride, there are targets littered throughout the landscape. The first time around, there’s a good chance you’ll be too busy soiling yourself to even notice them, but these targets offer up an opportunity to climb the leaderboards, should you survive the journey. As you blast away against all of the terrible things flinging themselves at your face, you’ll pick up various upgraded weapons like shotguns, akimbo machine pistols, and more powerful hand cannons. These can help you unlock other paths within the seven levels, though those alternatives do often land you in the same place as the game is heavily scripted.

This doesn’t seem that scary. I assure you, it’s pants-soiling territory.

To ensure maximum heart-pounding terror, developer SuperMassive injects plenty of in-your-face scary moments. Like modern horror, the game hops back and forth between silence and terror, though that won’t help you the first time around. Subsequent playthroughs become somewhat predictable (though often no less scary) allowing you to focus on finding the confetti-filled boxes and hidden passages hidden throughout.

There are four levels of difficulty in Until Dawn: Rush of Blood — Easy, Normal, Insane, and Psychotic. The final mode amps the difficulty significantly and enables single-life permadeath. Finishing all four difficulty levels, however, unlocks the “true ending” for the story. In all, the seven levels will take you roughly an hour and a half to complete, provided you stay alive that long, with side paths offering a few more jump-scares for your efforts.

You might be wondering what any of this has to do with Until Dawn (you can check out our review of that excellent title here). The answer is very little, and that’s not a bad thing. We do see some familiar faces, and all of this seems to have something to do with Josh from that game, but there’s not enough to really tie it all together here (except, perhaps, in that secret completionist ending). The good news is that it doesn’t matter — the experience is fairly self-contained, and it doesn’t need the precedent title in any way to be enjoyable.

Until Dawn: Rush of Blood

While repeat visits become somewhat predictable, Until Dawn: Rush of Blood offers up some genuine scares by tapping into some of our most twisted fears. While the game doesn’t take long to complete, watching your friends play it never stops being fun.

Ron Burke is the Editor in Chief for Gaming Trend. Currently living in Fort Worth, Texas, Ron is an old-school gamer who enjoys CRPGs, action/adventure, platformers, music games, and has recently gotten into tabletop gaming. Ron is also a fourth degree black belt, with a Master's rank in Matsumura Seito Shōrin-ryū, Moo Duk Kwan Tang Soo Do, Universal Tang Soo Do Alliance, and International Tang Soo Do Federation. He also holds ranks in several other styles in his search to be a well-rounded fighter. Ron has been married to Gaming Trend Editor, Laura Burke, for 21 years. They have three dogs - Pazuzu (Irish Terrier), Atë, and Calliope (both Australian Kelpie/Pit Bull mixes).
Related Articles: Until Dawn: Rush of Blood
Share
Tweet
Share
Submit