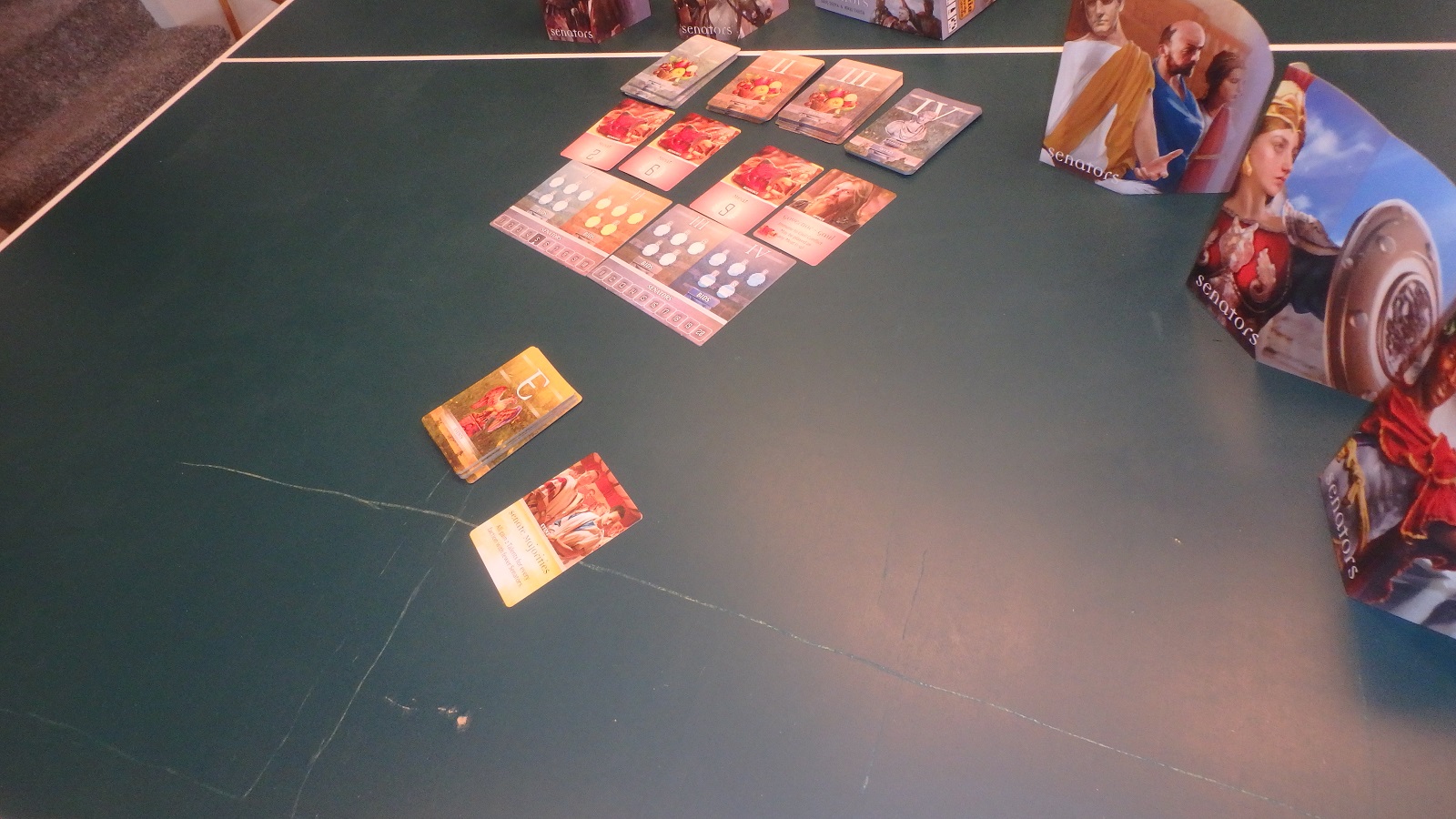 Personally, I don’t have anything against Senators- well actually, the card art that looks like ancient Roman themed stock photos is a bit of a turn off. It’s a perfectly fine set collection auction game, but for the life of me, I can not provide a reason for anyone to play it over any of the other auction games in my collection. The general format of the auctions feels a lot like The Estates: on a player’s turn, they can start a once-around auction starting with the player to their left, and once the auction ends the active player decides to either pay the player with the winning bid that amount to take the item up for auction, or have the player pay them the winning bid and let them have the item. Another of the actions, extortion, makes Senators mean like The Estates: the active player picks an item from in front of another player and forces them to either pay the active player x amount or sell the selected item to the active player for that much. Only not really, if someone wins an auction for one of your floors in The Estates, you had the opportunity to bid in that auction as well, you have no one to blame but yourself, but all too often extortion in Senators is just a tax for trying to play the game. Guess you have no one to blame but yourself for agreeing to play Senators? But honestly, so far I’ve only voiced minor quibbles and not my major issue with Senators that really tanks it for me.

The main thing that makes auction games work, makes them almost inherently balanced, is that while sometimes some lots will be worth more to some players than others, there’s usually some intrinsic value that keeps bidding competitive, unless the involved players have evaluated the value of the lot at wildly different prices. Where Senators falls on its face is the set collection part of the game: if the item up for auction is an olive card and Mike is the olive king, that is useless to me but Mike really wants it, so either I push up the bidding and run the risk of throwing away money, or I just sit on my hands and let Mike get that olive card for a price that feels like highway robbery, or I hope that the active player passes up on the necessity of making money on their turn, and decides to actively do the opposite and pay Mike for that olive that’s equally useless for them.

If this seems like an issue that would be intrinsic to all set collection auction games, you’d be clever for thinking that, but most of them find a way to skirt this issue. In Ra, every lot is an actual lot, so there’s gonna be stuff in there that’s gonna appeal to everyone. In QE, there is literally infinite money as long as you don’t spend the most, so you may as well nab that European Farm that Mike really wants. Not like it hurts you at all, you already know that Rob overpaid for that American industry by billions, you’re fine to spend whatever.

But I digress. My point is that, by separating each lot into its separate items, Senators does that kid putting a stick into the spokes of his bike meme, making a good third of the game’s auctions irrelevant to a good third of its players. And honestly, who wants to play an auction game where you don’t care about the auctions. That sounds like playing a dice game where the results don’t mean anything.

Senators is a set collection auction game with some good ideas, but fails on execution to the point that there's not enough good here for me to feel okay recommending it.

Nick grew up reading fantasy novels and board game rules for fun, so he accepted he was a dork at an early age. When he's not busy researching the intricacies of a hobby he'll never pick up, Nick can be caught attempting to either cook an edible meal or befriend local crows.
Related Articles: Senators, Tabletop
Share
Tweet
Share
Submit