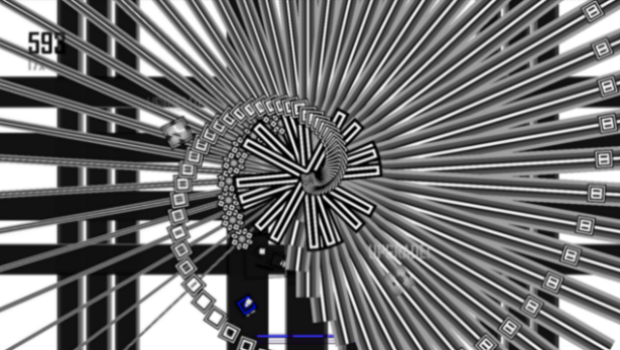 When I heard I was going to be playing a game where squares are fighting squares, I figured at the most I’d be getting a mathlete competition, and at the very least I’d be entertained by a church group laser tag match.  The truth of Zenzizenzic, Adult Swim’s latest gaming creation, is far simpler than that.  The game represents a world, either dystopian or hyper advanced, plagued with a ever-charging litany of two-dimensional polygons that you, a square with a missing section that shoots flat lasers, must fend off with cold indifference.  Fast paced, challenging, and visually stimulating, Zenzizenzic is a massive amount of fun that will make you spite the detailed and three-dimensional world we dwell in.

Simplicity is pretty much the theme here, so I’m going to try to match that in my breakdown of the game mechanics.  You shoot stuff.  Lots of it.  It comes at you from the four directions you’ve become accustomed to, plus a whole lot of other directions that you’ll get used to eventually.  In the meantime, the game will continue to blast enemies at you at breakneck speeds in those directions and others, and it is up to you and your handy lasers, missiles, charged shots and other bigger lasers to stop those nasty polygonal baddies from shooting you, and whatever goodly bastion you’re protecting that efficiently remains unmentioned.   Shield and gun power-ups taken from downed enemies make you stronger and more deadly, and that’s the only way you’re going to want to be in this violent and madcap world of danger.

Everything works fantastically from the way you move and operate to the way the world moves around you.  The enemy patterns are challenging to learn and rewarding when you do, but the game never stops being difficult at any moment.  The game suggests playing with an Xbox 360 controller and I suggest doing the same, but I did not have that luxury and still found the game very easy to control and played without any hinderance.  The requirements for moving onward in the game are very much in reach, but true victory over the game’s five levels at each rising difficulty level is a monumental feat that I doubt many will reach even over the game’s entire lifespan.  That could be considered a slight knock, as the game certainly will prove too difficult for casual gamers to enjoy.  Others will consider it a plus, as the game will certainly provide a true challenge to the most hardened of veteran players.

The hallmark quality of the game is the true “full screen” battles, with enemies and projectiles filling the entirety of your playing space throughout most of the action.  The advertisements from the game promise chaos, and the game delivers.  The standard game mode is fast-paced, action packed, and is designed to give you a quick blast of shooting all at once.

The game has a second mode, and it’s drastically different.  Macro mode, Zenzizenzic’s “open world” experience, takes the game’s space shooter template and places it in a freeroam setting.  The player is free to navigate his ship in any direction, and the game presents many surprises across the game’s vast world.  The player movement is slower and more deliberate, and the enemies are much fewer in number but do not attack in patterns.  It feels a lot like a “stranger in a strange land” scenario.  Everything is hostile, and there are blockades and doors everywhere that act as mazes.  Power-ups are plundered and discovered, and the locations within the world are completely unknown to the player.  Memory could serve the player very well in this mode (or simply writing things down in a notebook).  This mode is really creative, but plays slowly and is incredibly hard, limiting exploration time to three lives that can be taken with as little as one hit.  It’s not a perfect mode, but has enough promise and creative energy that it is well worth playing and getting to know.  The deeper it goes, the more fun it should become.

The game is also worth praising for it’s fantastic presentation, look, and feel.  The menus are very easy to navigate, and each menu allows the player to control their little ship throughout, even with test enemy scenarios so you can experiment with your weapon loadouts.   The design of the game is very elementary but every color and shape pops and looks great.  The soundtrack is also very fitting for the action and fun to listen to.  Very few things about the game stand out as negative, and the look and feel of Zenzizenzic is a perfect snapshot of the efficiency the game presents throughout.

Zenzizenzic is rapid, colorful, simple, and just about as much fun as you can have playing a video game. The game presents a complete and fully operational game in its standard mode, and then extends the worth with an open-world “macro” mode. With the non-stop, full screen, and full tilt destruction of battle waiting, there is not a reason in the world you shouldn’t be navigating the little square ship to victory.

Patrick Rost has been with Gaming Trend since 2013. At first focused on sports coverage, Patrick has gone on to cover a wide range of games and other products for the website. Outside of Gaming Trend, Patrick writes and records music, grinds perpetually in Elder Scrolls Online (PS4), and lives day to day with his two dogs, Bob and Stella.
Related Articles: Zenzizenzic
Share
Tweet
Share
Submit