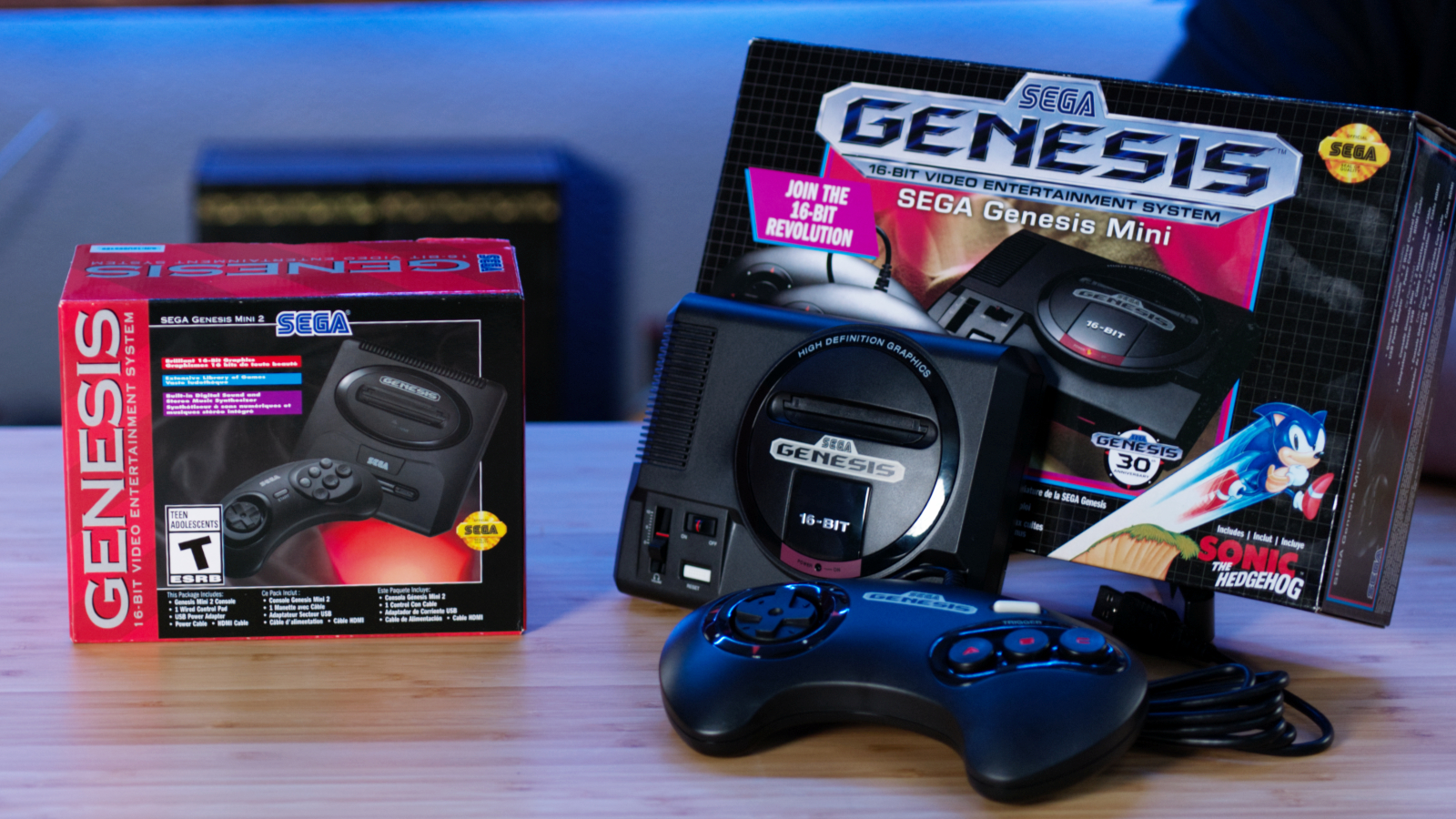 I grew up poor. Dirt poor, in fact. I never owned a NES, SNES, Genesis, SegaCD, or really any console as a kid. Instead, I’d rent a console from Blockbuster or visit a friend who had one. Most of my friends were Nintendo kids, but a few of them had a Sega Master System, Genesis, or other consoles that our parents still called “Nintendos”. While I missed out on a lot of incredible games having not owned the console, I also got to experience some that were formative for my love of RPGs, tactical games, and platformers. Games like Herzog Zwei, Shadow Dancer, and Shining Force had me headed back to that Blockbuster on a routine basis – I couldn’t get enough of em. Fast forward to today and Blockbuster may be gone, but my love of Sega hasn’t waned in the slightest. A follow-up to last year’s fantastic Genesis Mini, we’ve got our hands on a Sega Genesis Mini 2. Let’s take a look inside this tiny box and see if Sega can outdo themselves with the sequel.

The first thing I noticed pulling the system from the box was that the Genesis Mini 2 has been put on a diet. It’s even smaller than the first one, but any weight it lost has been gained by the controller. Sega heard our complaints about the three button controller from the first system and has included a six button controller this time, albeit only one of them – you’ll want to pick up a second one for games like Golden Axe II. I’m getting ahead of myself with these game name-drops though. Also inside the box is a USB cable for power, as well as an included power brick to plug it into the wall. Rounding things out, there’s also an included HDMI cable for the 720p HDMI output on the back of the unit, though just about any cable will handle a 720p signal, so feel free to use a longer cable if needed.

The Genesis Mini 2 has a few fun little features that are more for nostalgia than purpose. The top-loading cart slot has a dual-door system just like its big brother counterpart. While there’s no need to keep dust out any more, it lives on as a fidget distraction for me, and that’s making my brain happy. Just like its predecessor, there’s even a small non-functional slot on the side for the SegaCD sidecar attachment. Here it’s just an empty spot, but a man can pretend, can’t he? 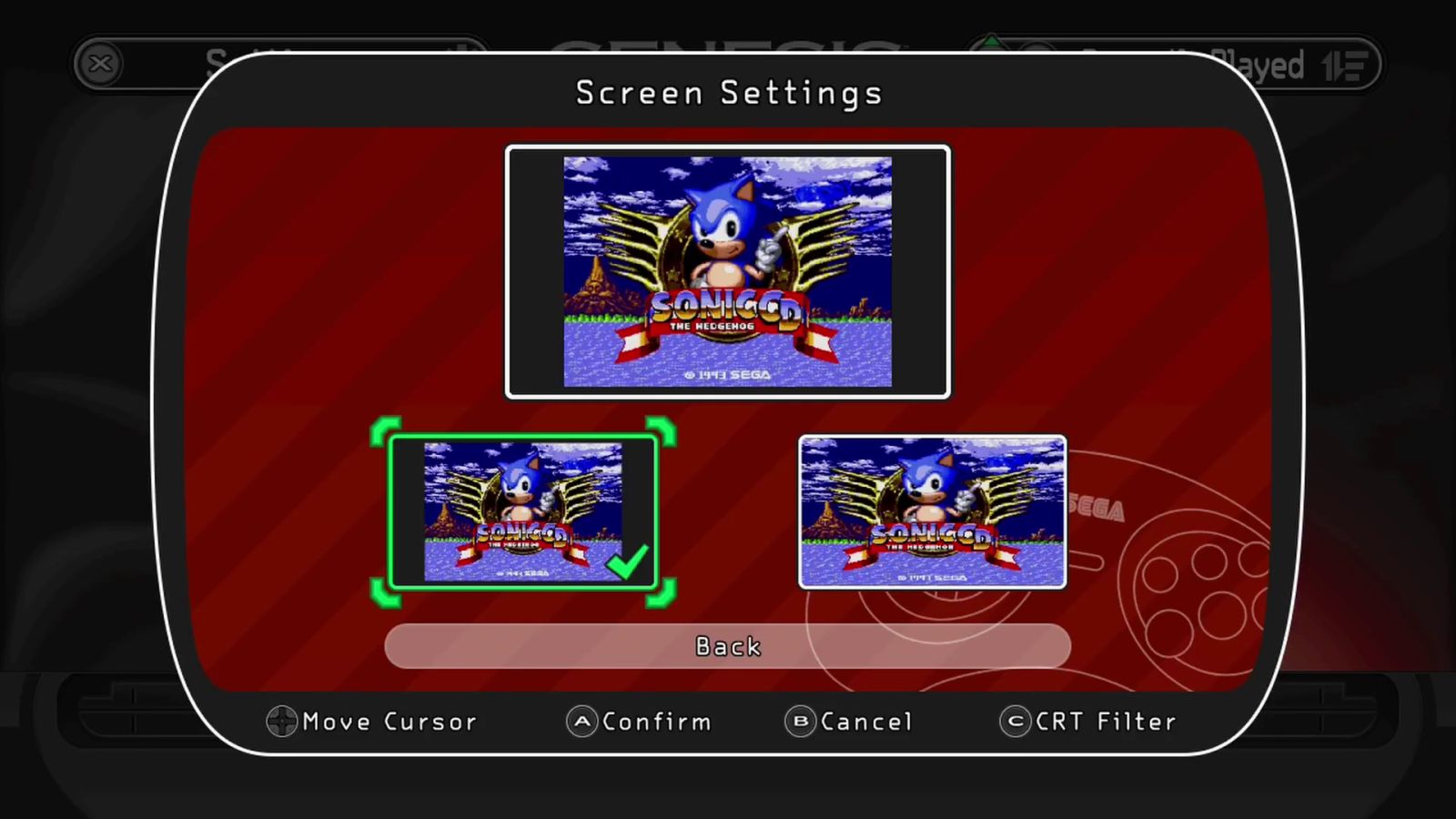 For those interested in console collection, the Genesis Mini 2 is based on the Japanese model of the console, so you’ll have a power switch instead of a button like we saw on the US release of the original console.

Hardware aside, it’s time to dive in and take a look at the software and the 61 games included on the Sega Genesis Mini 2, as well as some of the cool side features that make this one special.

The first thing I noticed when I fired up the Mini 2 was that the M2 team has put a stronger processor into the device. Moving around the titles is snappy, the artwork loads faster, and overall it’s simply a smoother experience. The Genesis Mini was no slouch, but the Mini 2’s menus are buttery smooth – something I hope extends to the games.

There are a number of sort options from the main menu, including sorting by recently played, A to Z or Z to A for title, and you can even flip them to spine-out for ease of viewing. It makes finding what you want to play, or replay, a breeze. 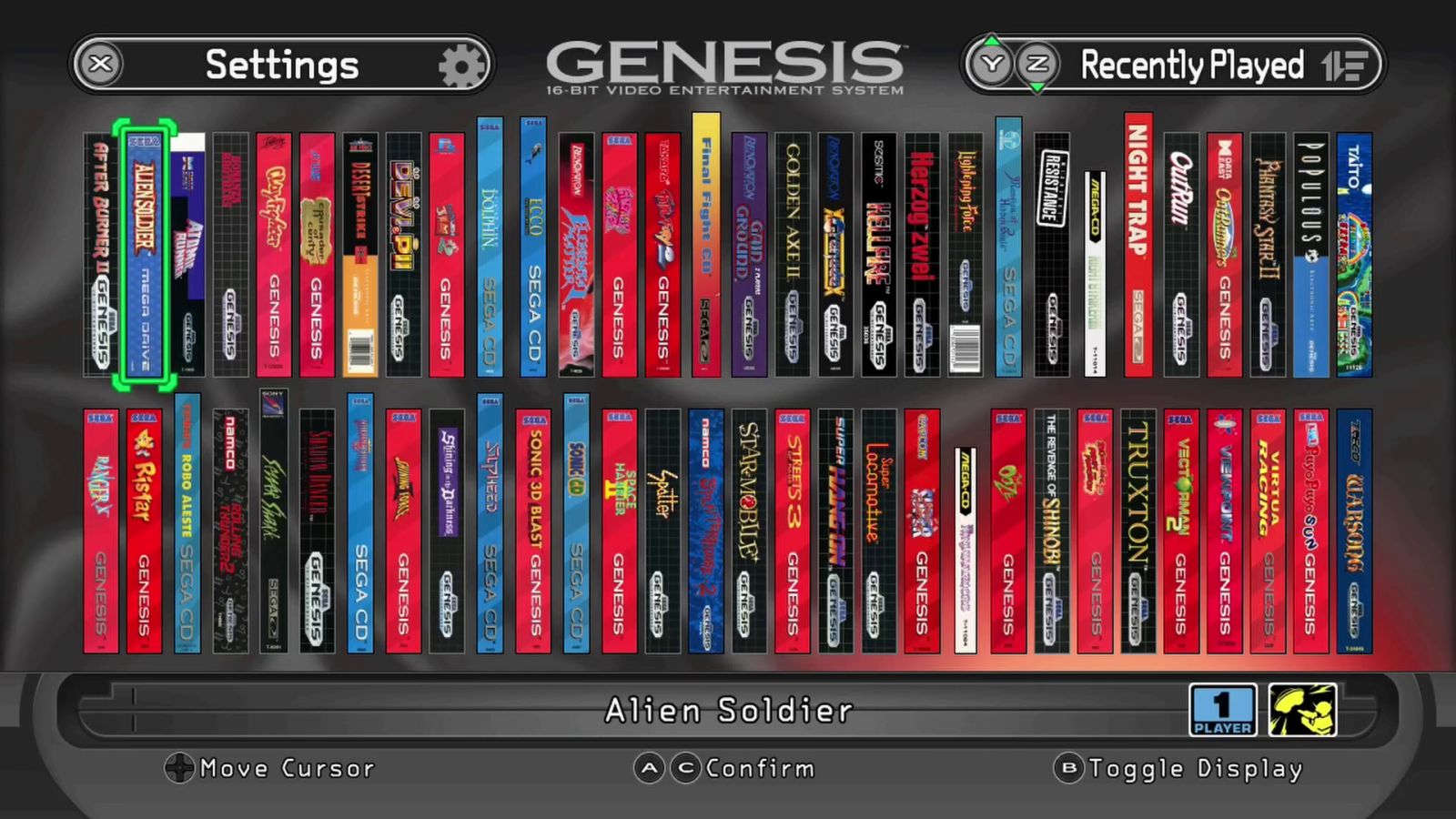 For those who want to use the Genesis Mini 2 in another language, you’ll find Japanese, English, French, Italian, German, Spanish, Traditional Chinese, or Korean as selections for your main menus, though this will come up a bit later when we get to gameplay, so hold that thought.

One of the small mercies is that our brains happily fill in what we remember with far rosier versions. As such, we fill in a whole lot of pixels. You can revisit those same pixels by tapping the Screen Settings selection which toggles between a CRT filter and the sharpened standard. The CRT filter is a software emulation of our old crummy tube TVs, and it’s just…ok. I find that this toggle comes in handy in some games by making text more readable, but muddies others that can be overly busy to start with. It also seems to make things a bit darker. Beyond the CRT emulation, you can toggle between 4:3 and 16:9 aspect ratios.

Beyond screen settings you’ll find a wallpaper selection that lets you choose from various designs, frames, and wallpapers. It kinda reminds me of the way some of the 60-in-1 arcade cabinets use a Hyperspin frontend to showcase games. 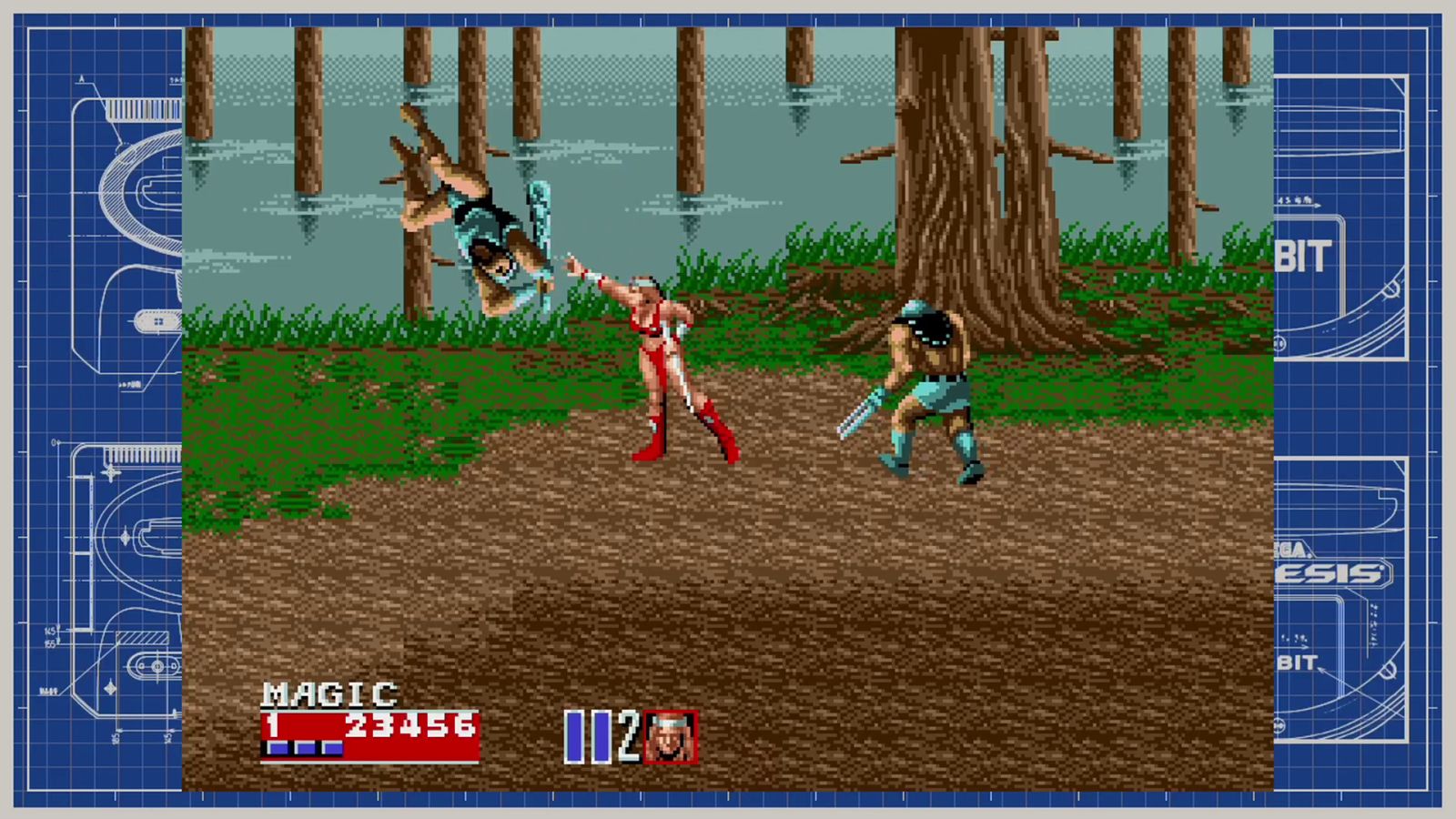 When you do select a game you’ll often be greeted with a handful of options. Most times it’s just a swap of written language, but occasionally you’ll find a special mode. For example, you’ll find an easier mode in Phantasy Star II which eases the grind a bit – something that was rather rough in the original release. There’s one other way to access alternate versions though – back to language selection!

Japan has gotten some fantastic versions of games that came to the states in some altered format. Well, with the Genesis Mini 2 allows you to access those games by simply changing your language to Japanese! Suddenly you’ll have access to the version from across the pond. You even get the Japanese box art, which is a nice touch. The best example of this is King Colossus which very much reminds me of Rygar – high praise from me.

Unboxing the system there’s one big difference between the first and section iteration of the Genesis Mini – the controllers. The Genesis Mini 1 came with two controllers, and they are full-sized, but they are the three button version that came with the original console. The Genesis Mini 2 comes with a smaller six-button controller, but you’ll need to pick up a second one for anything you’d like to play with two players. Thankfully, third party controllers work perfectly – I picked up a wireless one and a Saturn one from Retro-Bit and they both work without a hitch. 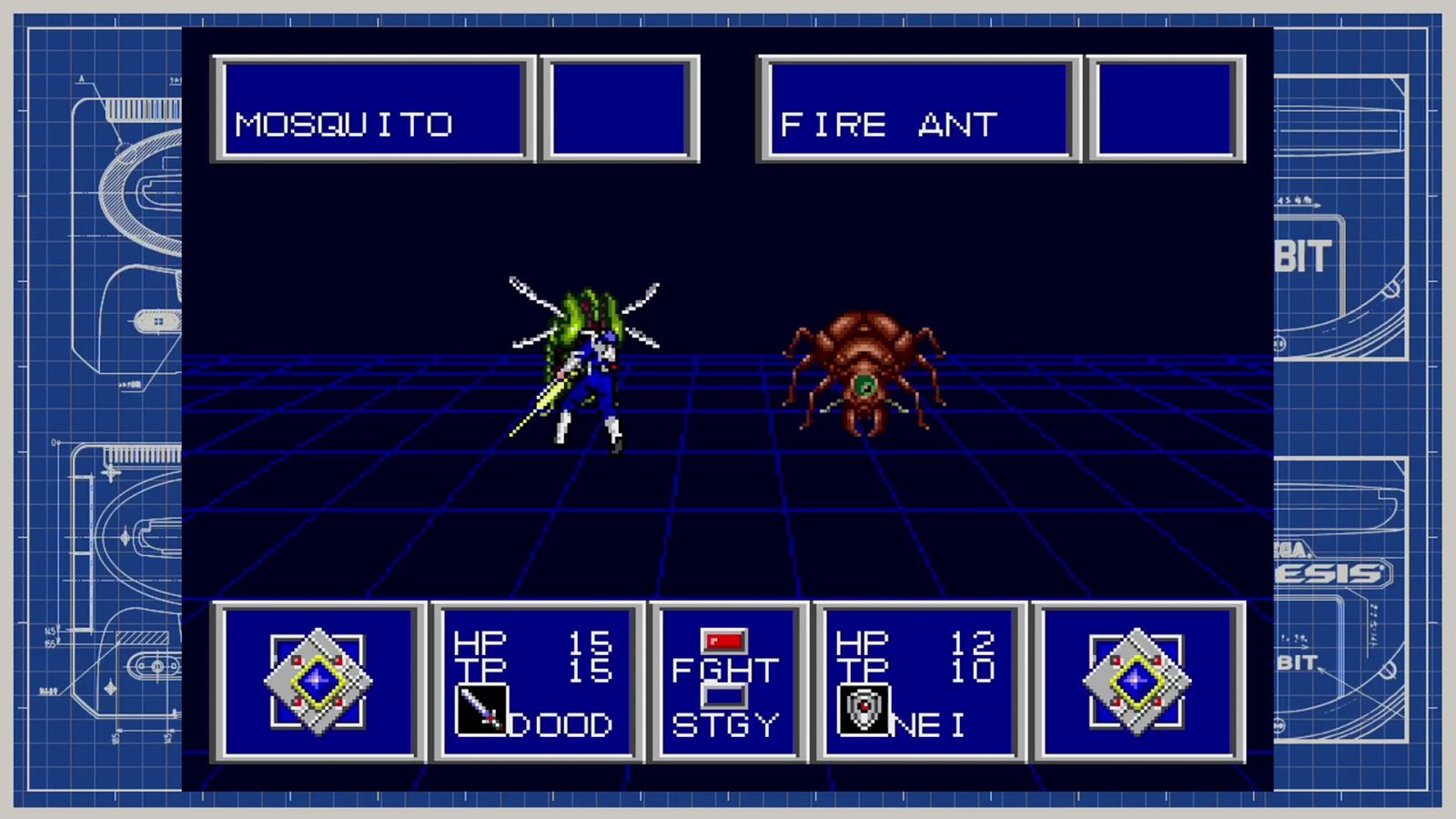 Interestingly, you now have a fresh option for the Genesis Mini 2 – two different sound chips. The Genesis sound chip has what appears to be a low-pass filter on it, providing a beefier sound, especially in games like Revenge of Shinobi. The Genesis V2 chip is clearer, if a little less bass-heavy. You can really hear the difference, but it’s really your choice on which you’d prefer – it’s nice to have the option. That said, there’s something a little odd about the V2 – about 4-5 frames of sound lag. You hear it mostly when you switch menu options and you hear the selection before you see it. Honestly, it doesn’t seem to affect gameplay in any meaningful way – just something I’ve noticed.

We’ve talked a lot about the hardware and software, so now for the part you’ve been waiting for – let’s talk about some of the highlights of the 61 titles you’ll find in the Mini 2.

I’m not going to go through every single game on top of the video above, but we’ll tackle a handful of these in alphabetical order with a short bullet on each. Before we get to those, however, I want to point out something cool. Sega has included the original manuals to all of these titles on the official Japanese website for the Sega Genesis Mini 2. You can find that right here if you need a trip down large-box memory lane. 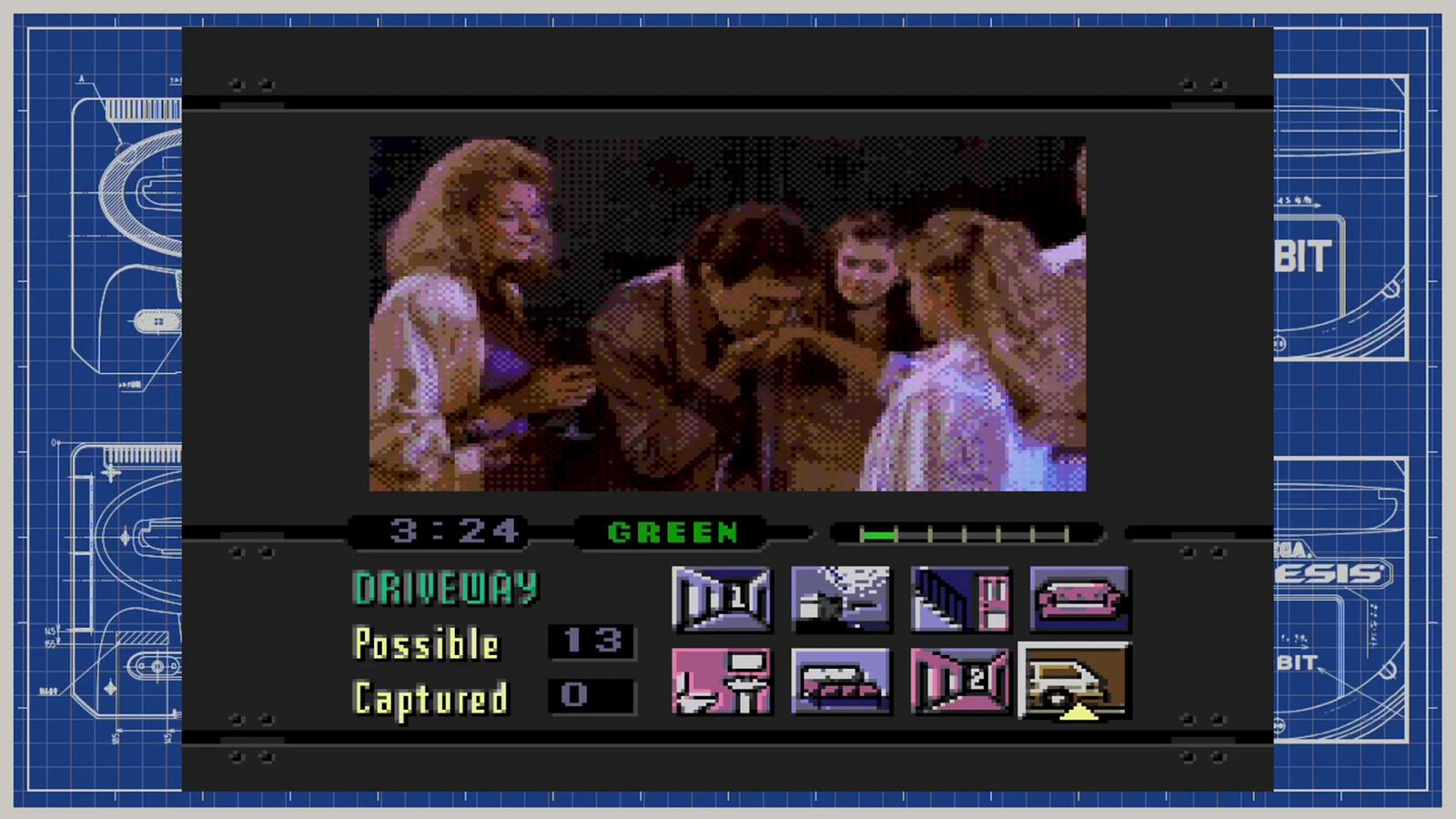 Some of these games are downright brutally hard, so you might appreciate that the mode button allows you to set up to four save states. Be mindful of where you put them as they can paint you into a corner that you can’t get out of, but they are incredibly handy for the more brutal parts of games like…well, most of them, really. The 80s and 90s were built around the concept of the player having “lives” to expend, so this system might be the chance you have at finishing some of these games. Don’t feel guilty if you lean on save states to finally roll credits on some of these titles. 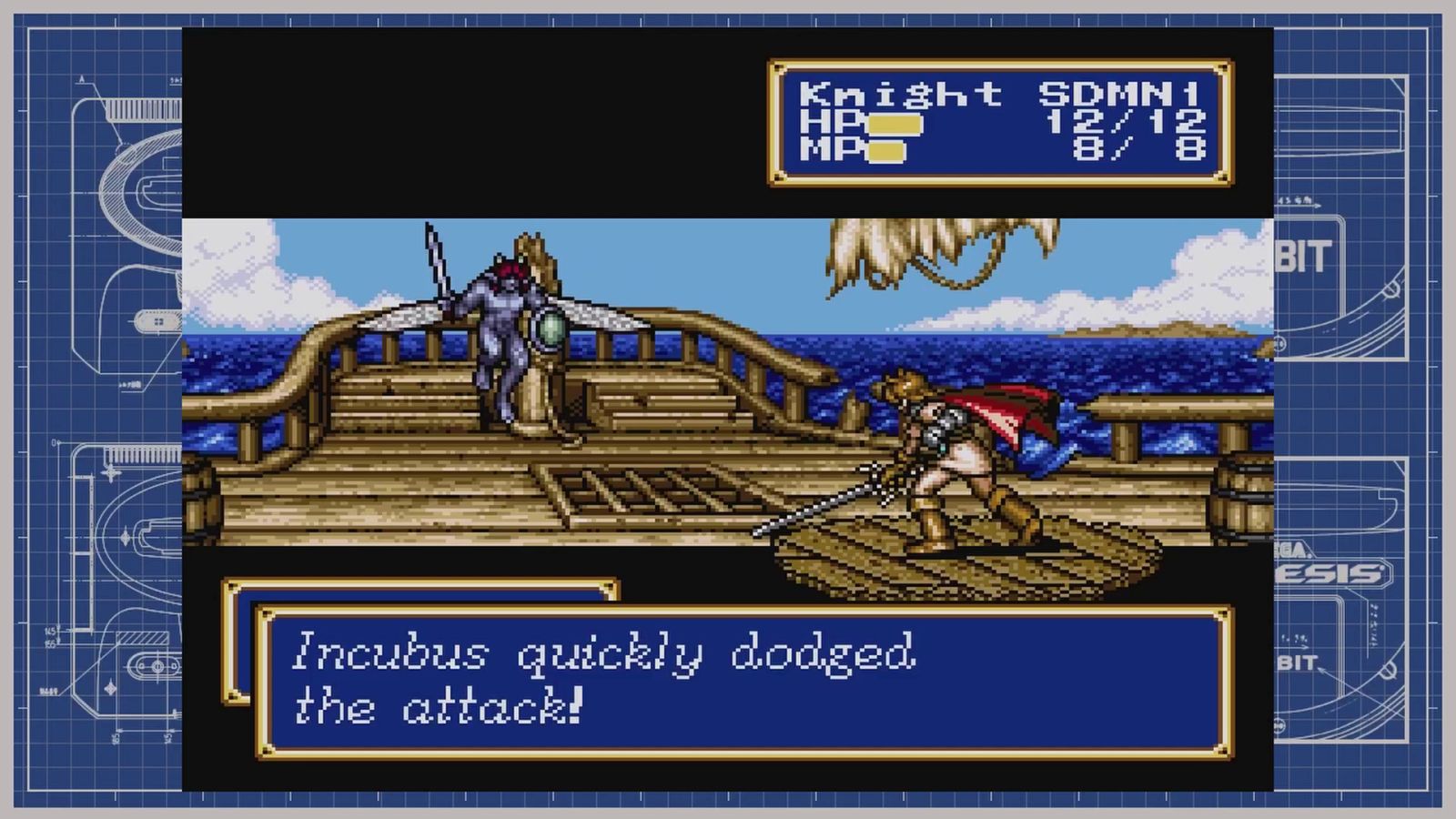 I’m not covering every title on the console here, just the highlights, but I have to point out a glaring omission – where are the Working Designs RPGs? Lunar: The Silver Star and Lunar: Eternal Blue were magical on the SegaCD, and I’ve always wanted to check out Popful Mail and Vay. Perhaps we’ll get those alongside the likes of Dragon Force, Shining Wisdom, and Albert Odyssey: Legend of Eidean should Sega decide to make a follow-up mini console for the Sega Saturn. I’d love to try Shining Force 3 and Hyper Duel, and games like X-Men vs. Street Fighter, Radiant Silvergun, Panzer Dragoon Saga, and NiGHTS Into Dreams would make that an instant-buy. C’mon Sega – make it happen!

The Sega Genesis Mini was an incredible mini console, and the Genesis Mini 2 manages to beat it in every way. More titles, and of better quality, and with a few hidden surprises, this is a must-have for any kid like me who never managed to get one, or just somebody who wants to relive the classics. Buy it quick though – these are going to disappear fast!

Ron Burke is the Editor in Chief for Gaming Trend. Currently living in Fort Worth, Texas, Ron is an old-school gamer who enjoys CRPGs, action/adventure, platformers, music games, and has recently gotten into tabletop gaming. Ron is also a fourth degree black belt, with a Master's rank in Matsumura Seito Shōrin-ryū, Moo Duk Kwan Tang Soo Do, Universal Tang Soo Do Alliance, and International Tang Soo Do Federation. He also holds ranks in several other styles in his search to be a well-rounded fighter. Ron has been married to Gaming Trend Editor, Laura Burke, for 21 years. They have three dogs - Pazuzu (Irish Terrier), Atë, and Calliope (both Australian Kelpie/Pit Bull mixes).
Related Articles: Hardware, SEGA Genesis Mini 2
Share
Tweet
Share
Submit